The Writing’s on the Wall in Greendykes Road

The Cardross Hotel in Broxburn 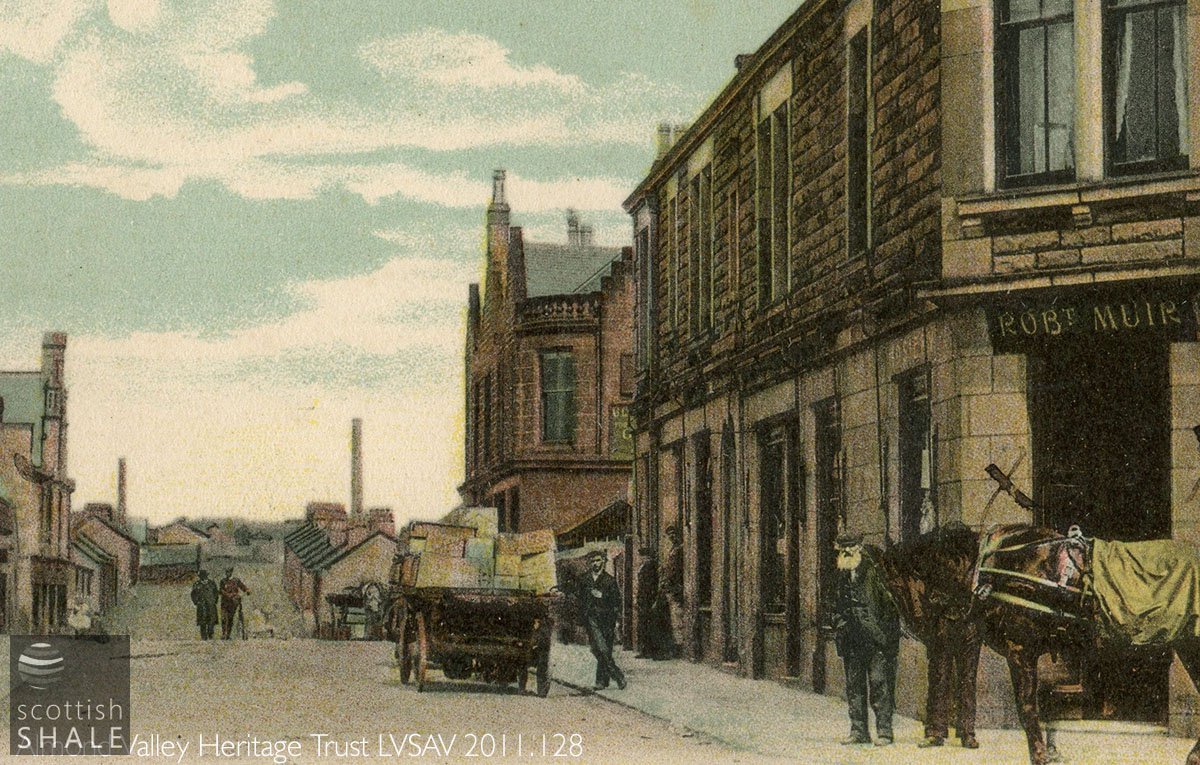 The nut brown and battleship grey frontage of Broxburn Snooker club now appears rather plain and austere when passing by on Broxburn’s Greendykes Road. In the lane at one end of the building however, the grey paneling has been peeled back to reveal evidence of a former glory. There are traces of sweeping decorative letters, blocked out in colour; that was once a wonderful piece of signwriting. But rubbed back, over-painted and damaged by time, it is now not immediately obvious what this ghost sign once said.

The solid two-storey sandstone building was once the Cardross Hotel, designed by the Edinburgh firm of James M. Thompson who were architects of many other public buildings in Broxburn. It was built in 1886 for Thomas Brownlee, an established local butcher, however after investing £2,000 in its construction he faced a battle to obtain a hotel licence. The licence application was strenuously opposed by both the Young’s Oil Company and the Broxburn Oil Company. Broxburn already boasted one public house for every 423 inhabitants, and the employers were concerned that granting of a hotel licence would open the doors to illicit Sunday drinking by locals purporting to be bona-fide travelers. The Broxburn Oil Company argued that they had spent great sums in providing public halls, reading rooms and institutes to distance their workforce from the temptations of drink. They were particularly concerned that the hotel was not on the main street where it might serve the needs of travelers, but was instead “on the old statute labour road in the centre of workmen’s houses, not one of which consists of more than two apartments”

Brownlee hit back by presenting a petition of support signed by 100 merchants and workmen, and by 23 farmers. He also questioned the oil company’s motives for objection, pointing out that the owner of the rival Strathbrock hotel was employed by the Broxburn Oil Company’s chairman. The licence was granted.

For the first few years the Cardross hotel established a good reputation and Thomas Brownlee lived up to his promise that it would “not be hotel in name only”. The Cardross had extensive stabling at the rear to serve the needs of travelers and offered “airy bedrooms, private sitting rooms and a commercial room”. In 1890 Brownlee withdrew from practical management and let control of the business for a ten year period to a Mr. Barr; a wholesale spirit dealer from Glasgow. Barr installed a succession of tenant licensees, imposing exorbitant rents that compelled tenants to run the business so hard that a blind eye was sometimes turned to illegal Sunday drinking. There were five tenancies over the course of ten years, one ending in bankruptcy, and many instances of fights and public disorder. The licensing board eventually lost patience and withdrew the licence. 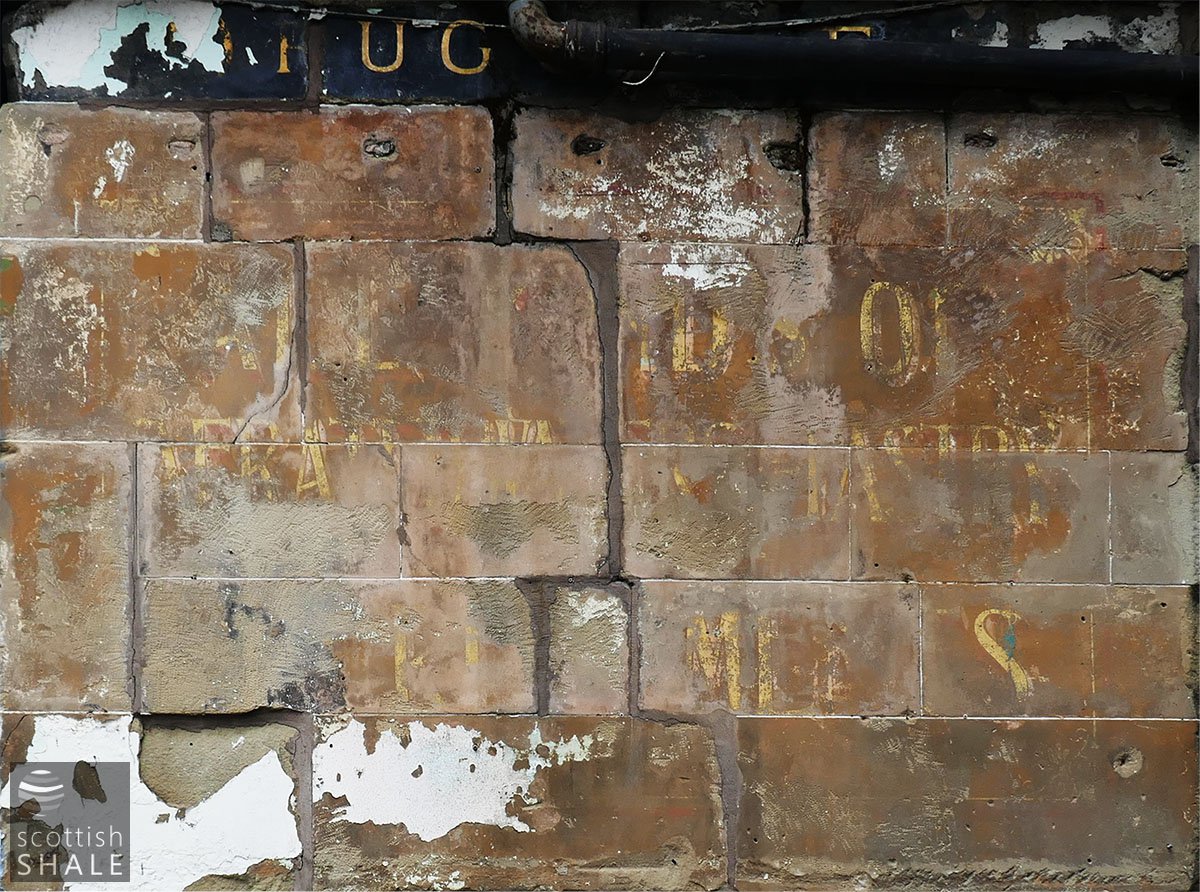 The writing on the wall, with image straightened and contrast boosted. 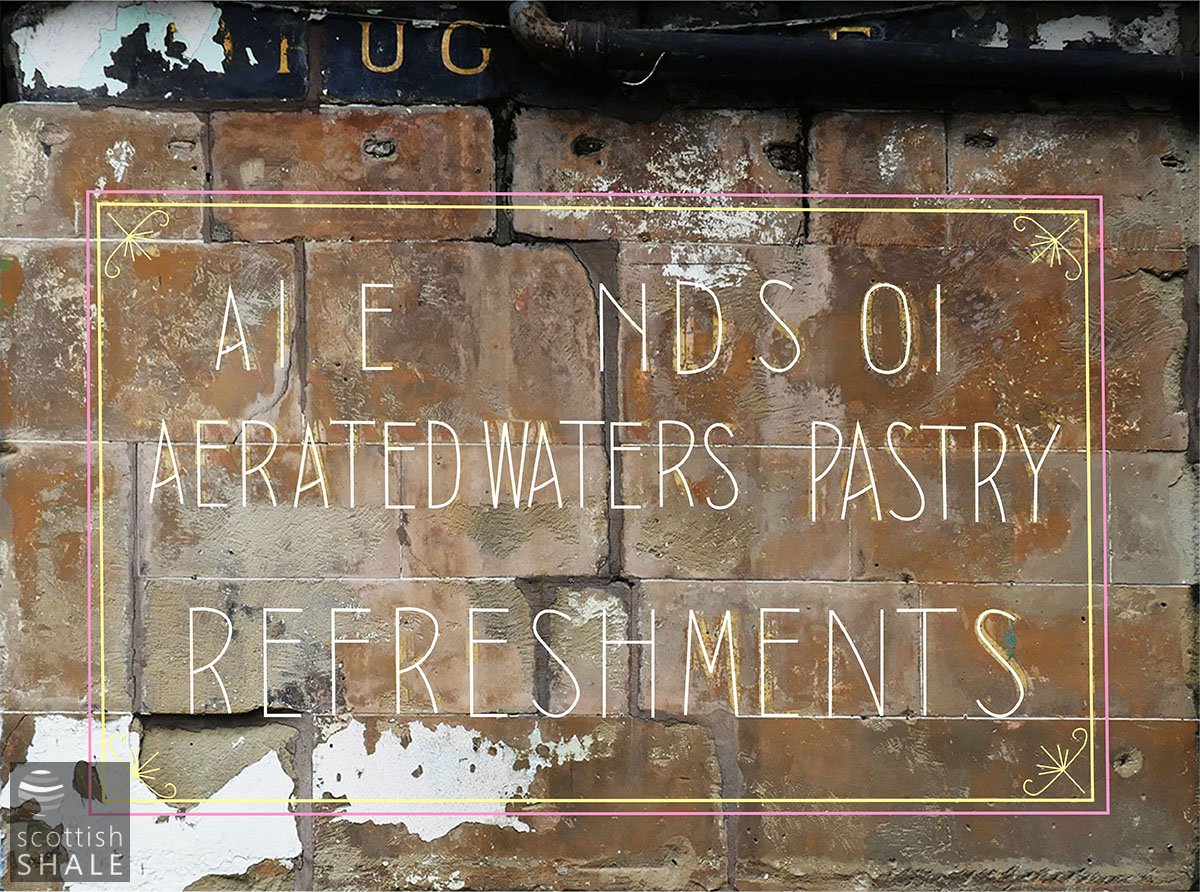 What the sign might have said. The gold letters on the black band at the top seems to say "druggist", and might be from a different period from the main sign.
The top line has baffled us. The first word might be "ale", but the spacing doesn't seem quite right. The last word seems to start with an "o", but any form of "oil" doesn't seem to go well with fizzy juice and pies?

It was not until Mr Barr was out of the picture did order return and the licence restored to his final tenant, William White. At the start of the 20th century, the hotel was doing a good trade as a venue for meetings, functions and band practices. Stables were let to a carriage hirer, and later operated as a garage. It appears that some of the frontage of the hotel was split off and let as shops. In 1906, when the premises were extended, it boasted two bars downstairs, one upstairs, and a jug bar for the carry-out trade. It was claimed that the extension was required in order to “separate the people who loafed around the public bar from the respectable clientele” that had gathered since William White had become proprietor.

In 1920, following passing of the Temperance (Scotland) Act, the voters of Broxburn chose to limited the number of licensed premises in the area, requiring six of the 22 pubs and hotels to relinquish their licence. Among those selected was the Cardross Hotel, but in the event this decision was not contested. In December 1920 Broxburn Cooperative Society’s fine central premises, just across Greendykes road from the Cardross Hotel, had been gutted by a disastrous fire. Within a few days the Coop negotiated to buy the Cardross, enabling them to continue in business until new premises could be built. While never particularly well-suited for their purposes, the Co-op continued to operate from the Cardross buildings for many years; the upstairs area being converted as the society’s offices.

Looking more closely at surviving lettering, you can make out the words “aerated waters” and perhaps the word “pastry”. With a bit of imagination the odd scraps of letters on the lower line might say “refreshments”. The top line remains a mystery however, and may perhaps remain so unless we can find a photograph showing this part of the Cardross Hotel Building in its heyday.

Beneath the battleship grey boards, a little history is revealed. 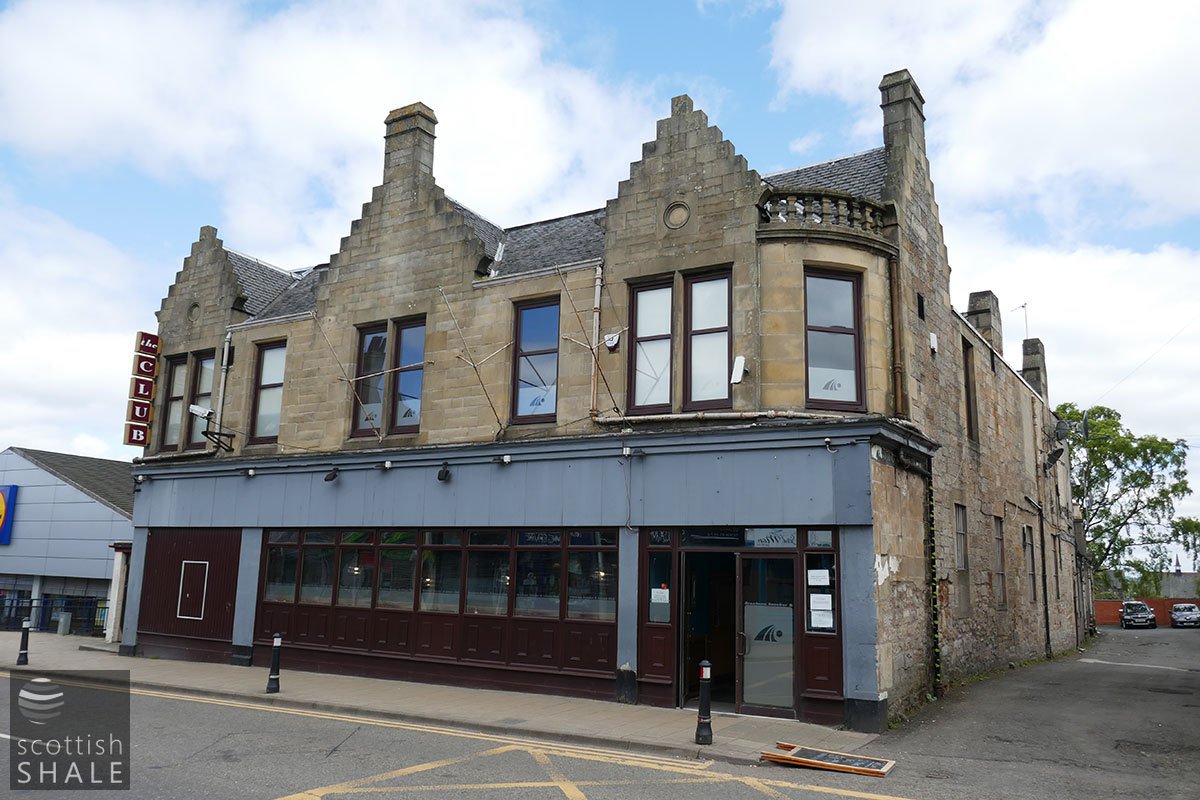 The Cardross is clearly marked on the 1895 OS map, but is shown simply as a public house in 1916, with internal divisions that might indicate that part of the building frontage had been split off into shop units. It is merely a shop and offices by the 1950's. Images courtesy of National Library of Scotland. 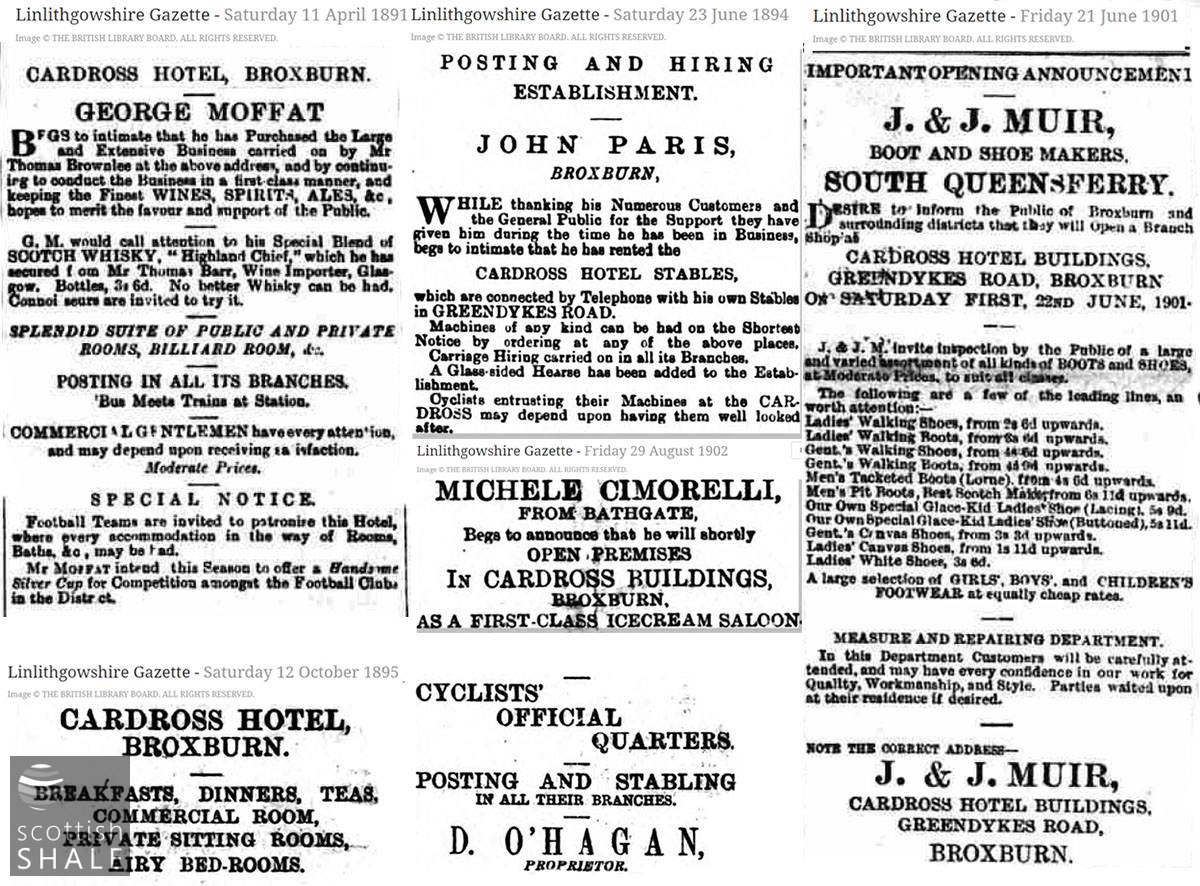 Snippets for the hotel and the shop units within the building.