Trains Beneath the Viaduct

The mineral railway to Newliston pits 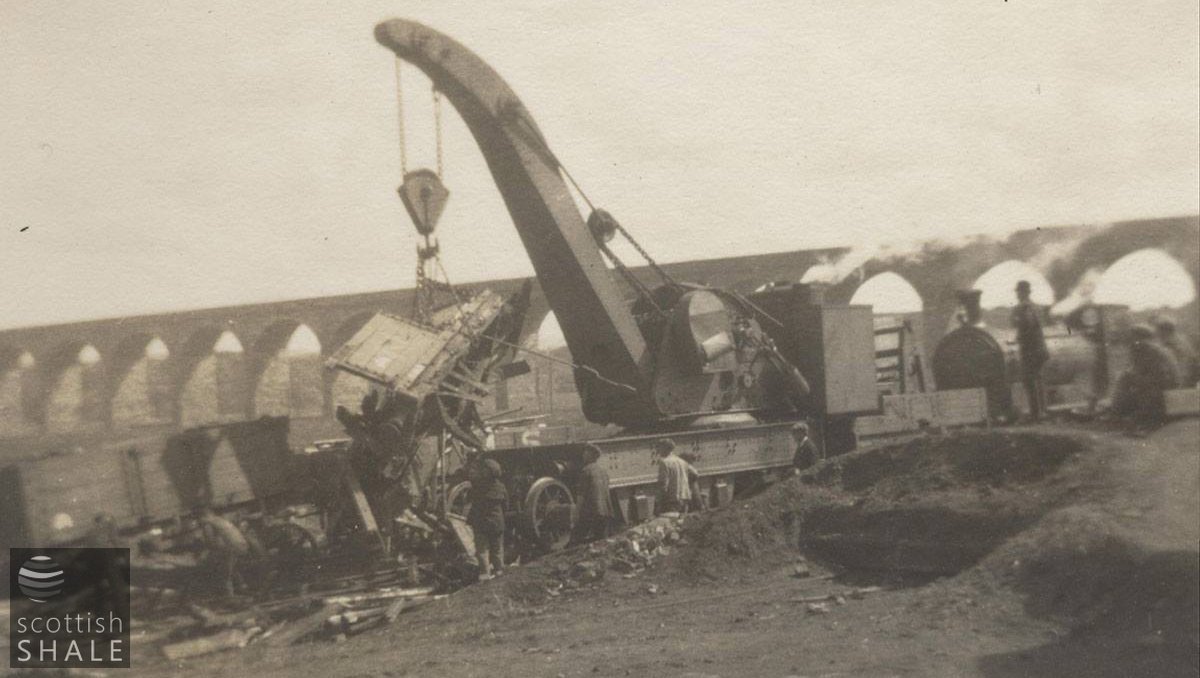 Oops.!
A breakdown crane hauled by a North British Railway C class locomotive help tidy up the mess after an accident in the sidings of Newliston mine.

The magnificent 36 arch viaduct that carries the Edinburgh and Glasgow Railway across the Almond valley is recognised as one of West Lothian's most iconic landmarks. Its mighty presence features in the current local authority logo. Fewer people will be aware of the workaday little railway that once passed beneath great viaduct, carrying shale from the Newliston mines.

In 1883, Young's Paraffin Light and Mineral Oil company obtained the right to work the shale beneath the Newliston estate. Young's had been prospecting for new supplies of oilshale throughout the shale district; concerned that the pits and mines around their Addiewell works were becoming exhausted. The discovery of Newliston shale helped secure the future of the company, and following a merger with the Uphall Oil Co. later in that year, Newliston shale could be processed at Uphall oil works, saving considerable transport.

The seam of Dunnet shale found beneath the flat carselands of Newliston was of good quality, but was steeply inclined, plunging into the ground in a northwesterly direction at an angle of 1 in 4. This gradient led to problems with roof-falls and flooding throughout the life of the mine. Workings were eventually to extend beneath Newliston House and much of Newliston estate, and then westward beneath the Edinburgh and Glasgow railway, taking care not to remove shale from the piers of the viaduct. 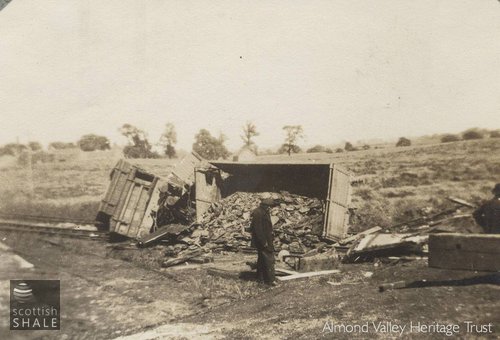 A branch railway almost a mile long was constructed to link Newliston No.29 pit with the Edinburgh to Bathgate railway near Drumshoreland, passing beneath the most northerly arch of Almond Valley Viaduct and running close to Westerton Rows, where 42 new homes were constructed to house much of the workforce of the mines. The line followed an easy course across the flat farmland, the only significant earthworks being a small embankment either side of an overbridge across the minor road to Birdsmill. Traffic was worked by the North British Railway, with shale travelling along their main line for a little over two miles to reach Uphall oil works.

In the turbulent years following World War One, plans were made to abandon Newliston mine, however it was eventually resolved to pump out and repair the workings, invest in new electric winding and ventilation equipment, and link the mine underground to the Broxburn oil Co.'s Dunnet mine. Water entering the Newliston mines could then be pumped out in Broxburn, a mile or to the west. Following closure of Uphall oil works, Newliston shale was sent to supply the retorts of Roman Camps oil works.

By 1937, reserves of shale at Newliston mine were exhausted, and underground workers were transferred to new mines being driven at Roman Camps No.6 and No.7

Much of the course of the branch railway has been ploughed out, or cut across by the M8, leaving the route marked only by field boundaries. The embankment and abutments of the bridge over the Birdsmill road still remain, and the trackbed eastwards to Haugh is now a farm road. At the site of Newliston No.29 mine, various foundations and low walls continue to mark the site of the pithead buildings, and the route of the sidings is still evident within the grazed field.

An excellent view of this industrial archaeology can be glimpsed from the comfort of a new electric train travelling from Edinburgh to Glasgow across the magnificent Almond Valley viaduct. 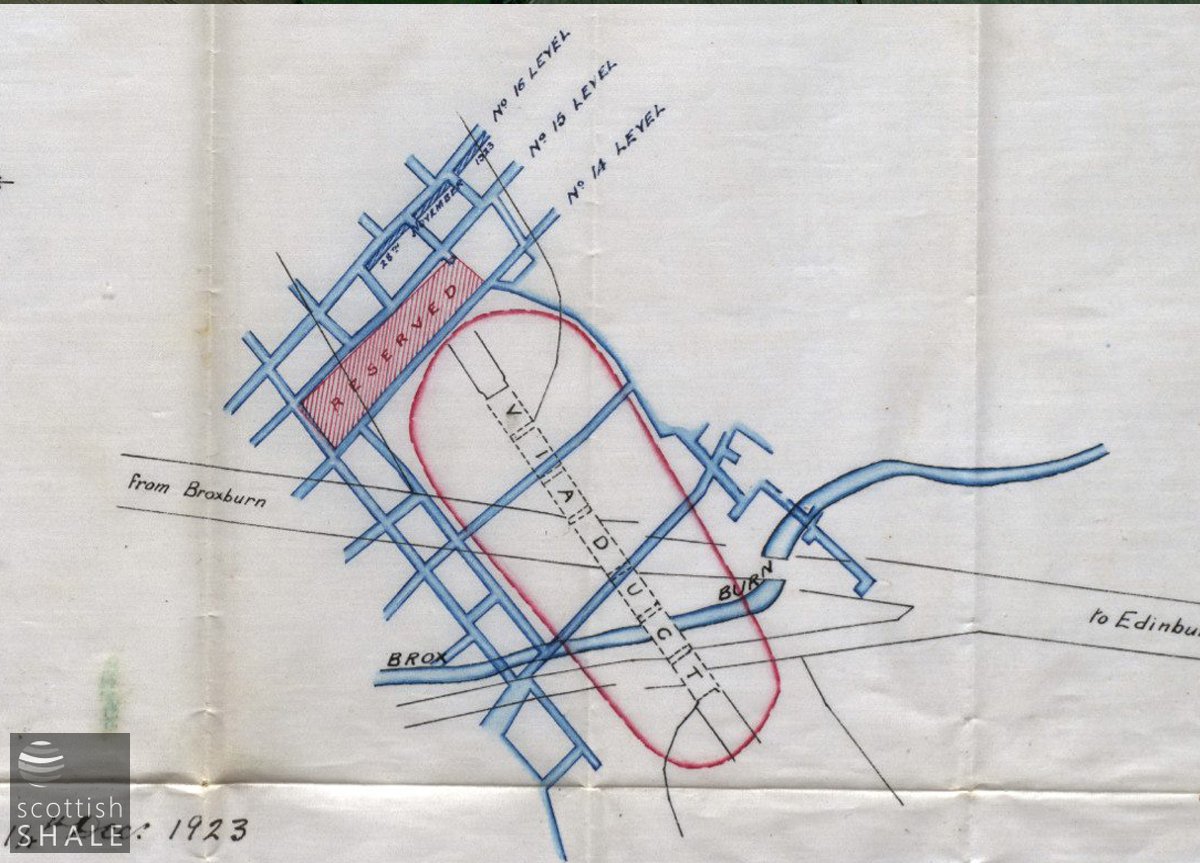 Ground safeguarded beneath the foundations of the viaduct. 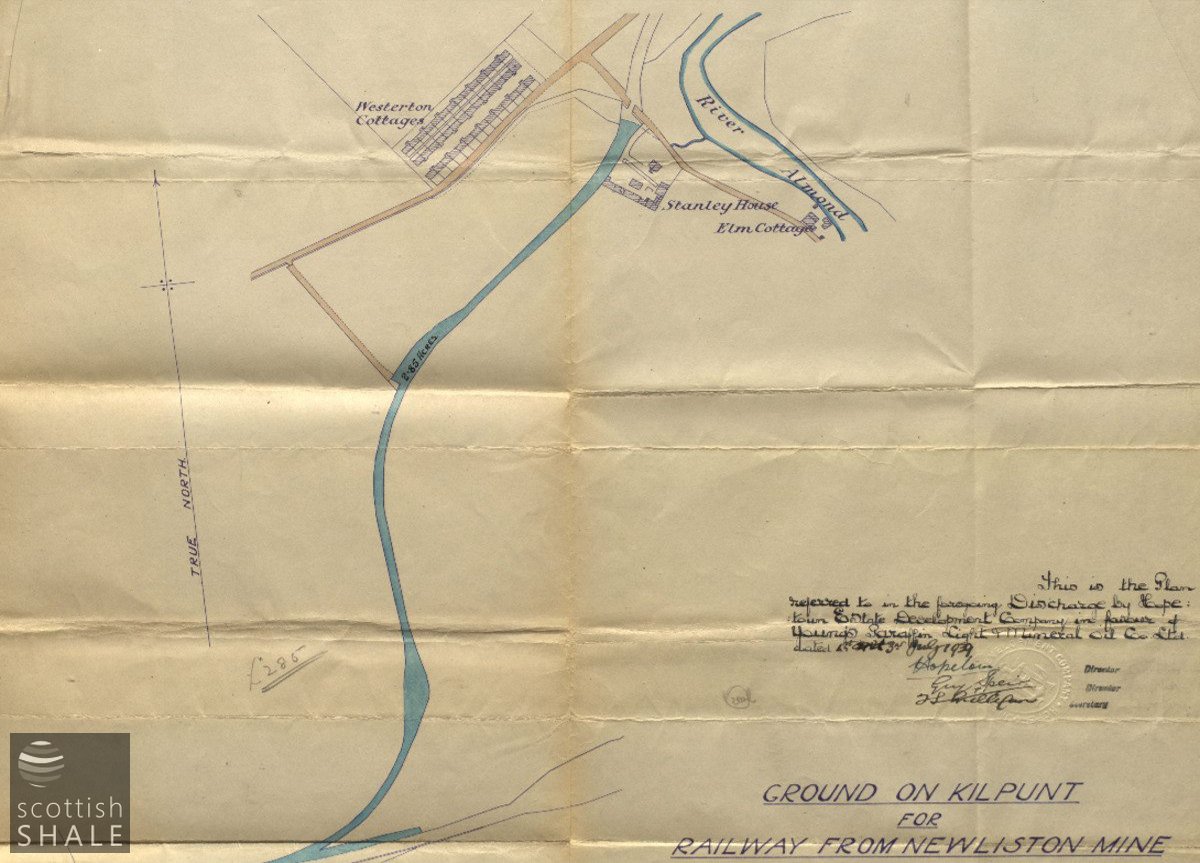 The route through the lands owned by Hopetoun estates, showing Westerton Cottages. 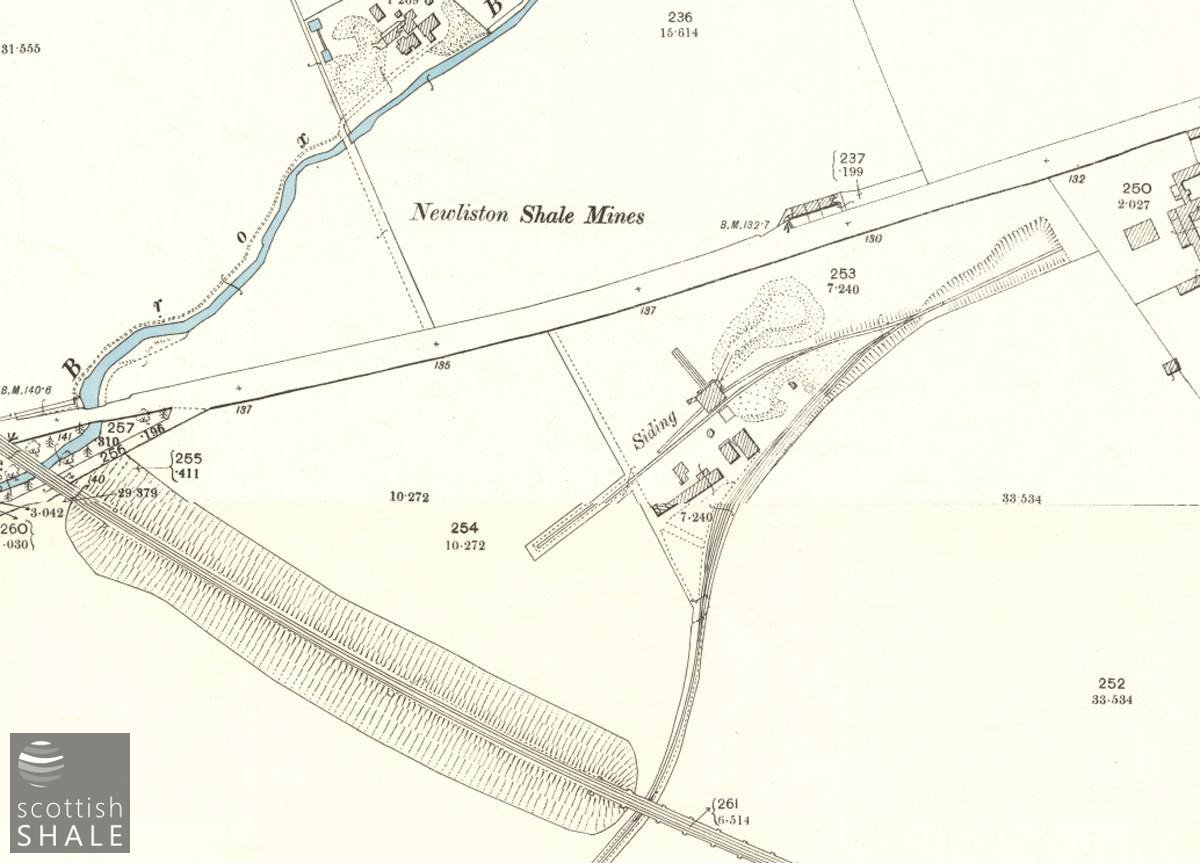 The site of Newliston No.29 mine, with a service pit to the north. from 25" OS map c.1895, image courtesy National Libraries of Scotland. 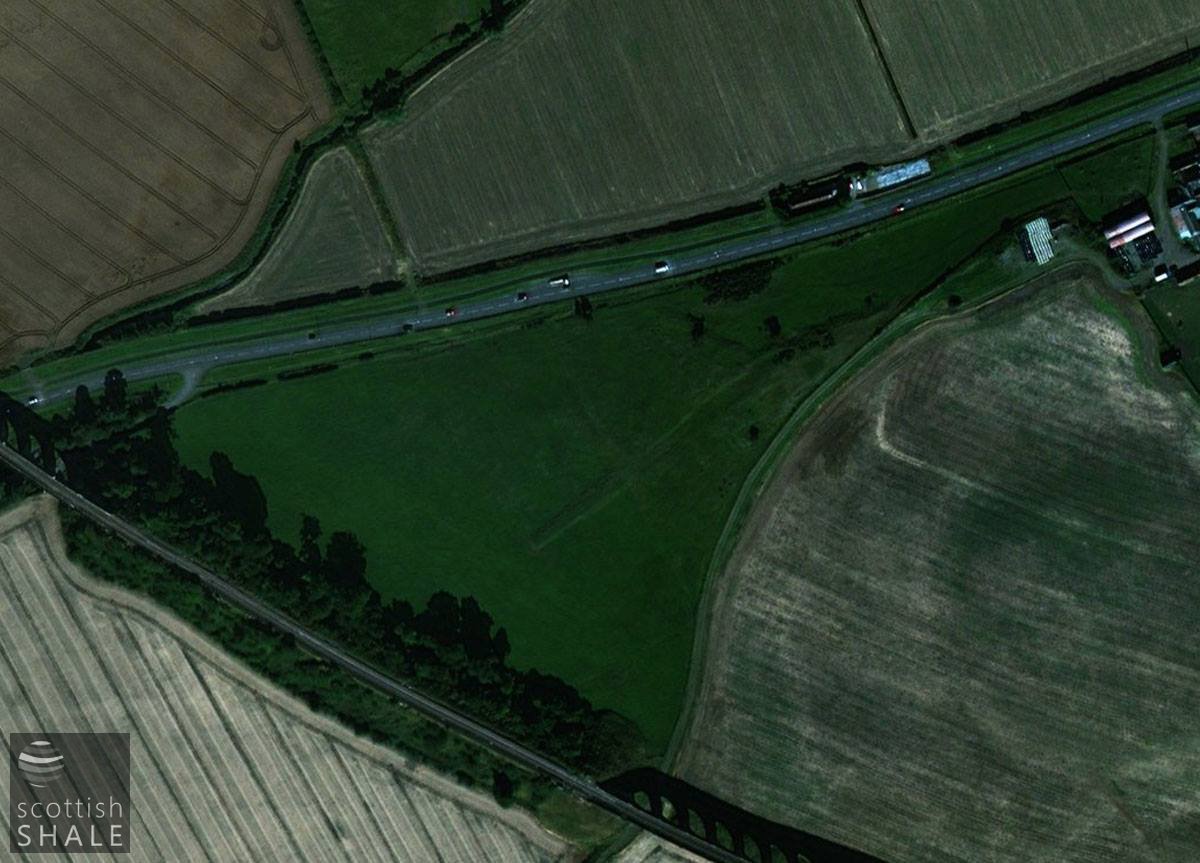 A recent view of the same area. 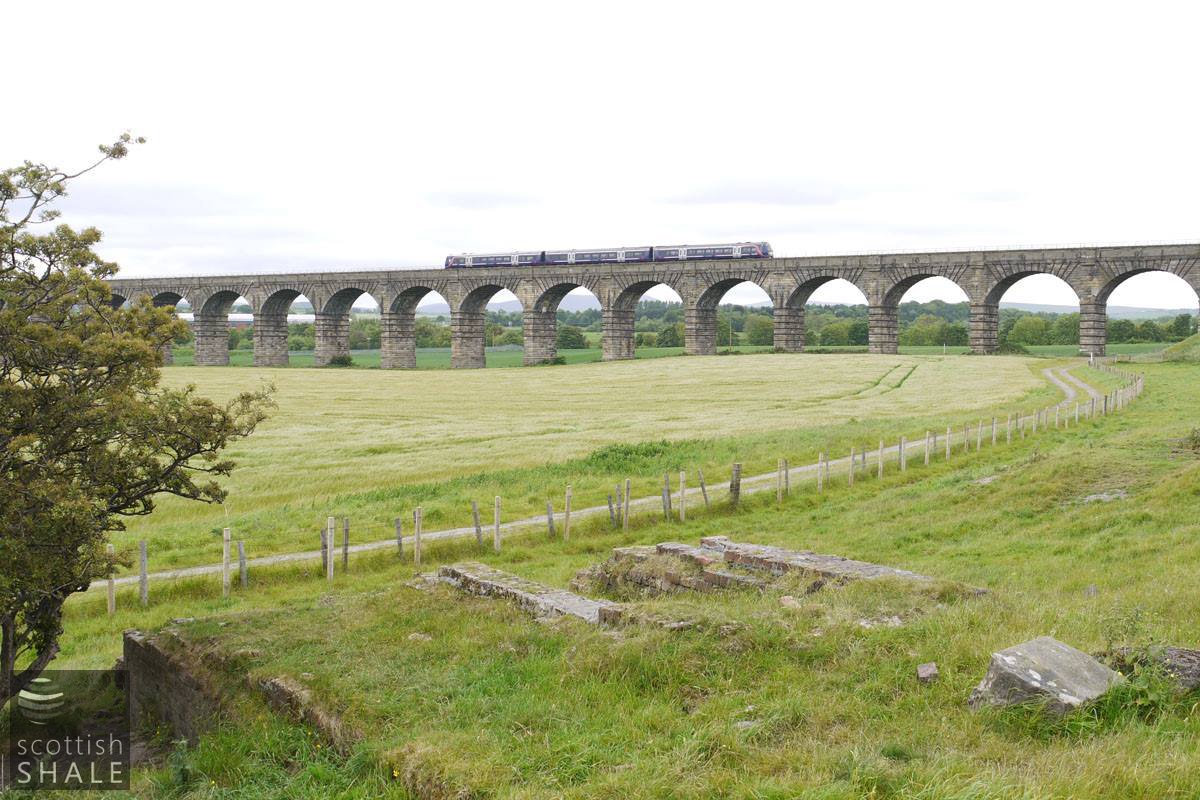 Building foundations at the site of Newliston No.29 mine, with the farm track following the route of the railway branch.
Photographed in 2011. 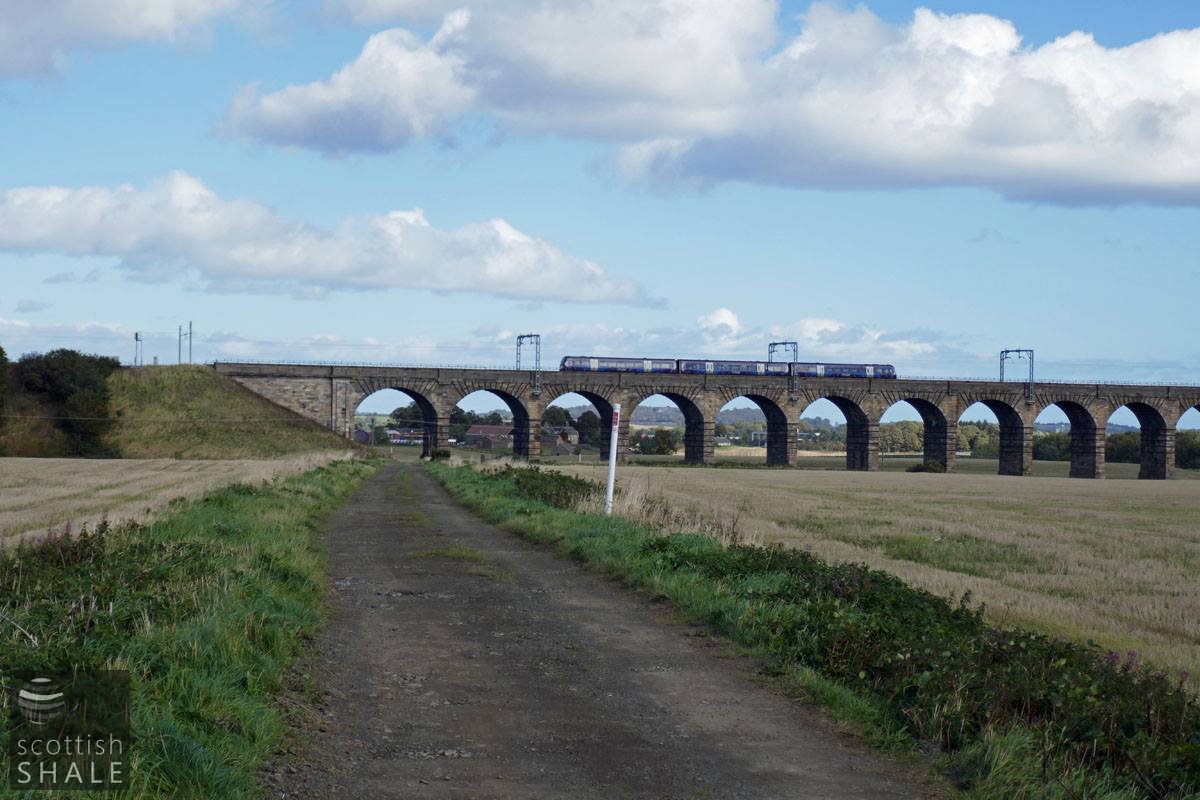 View from the west looking towards Haugh farm, with the road following the railway trackbed. 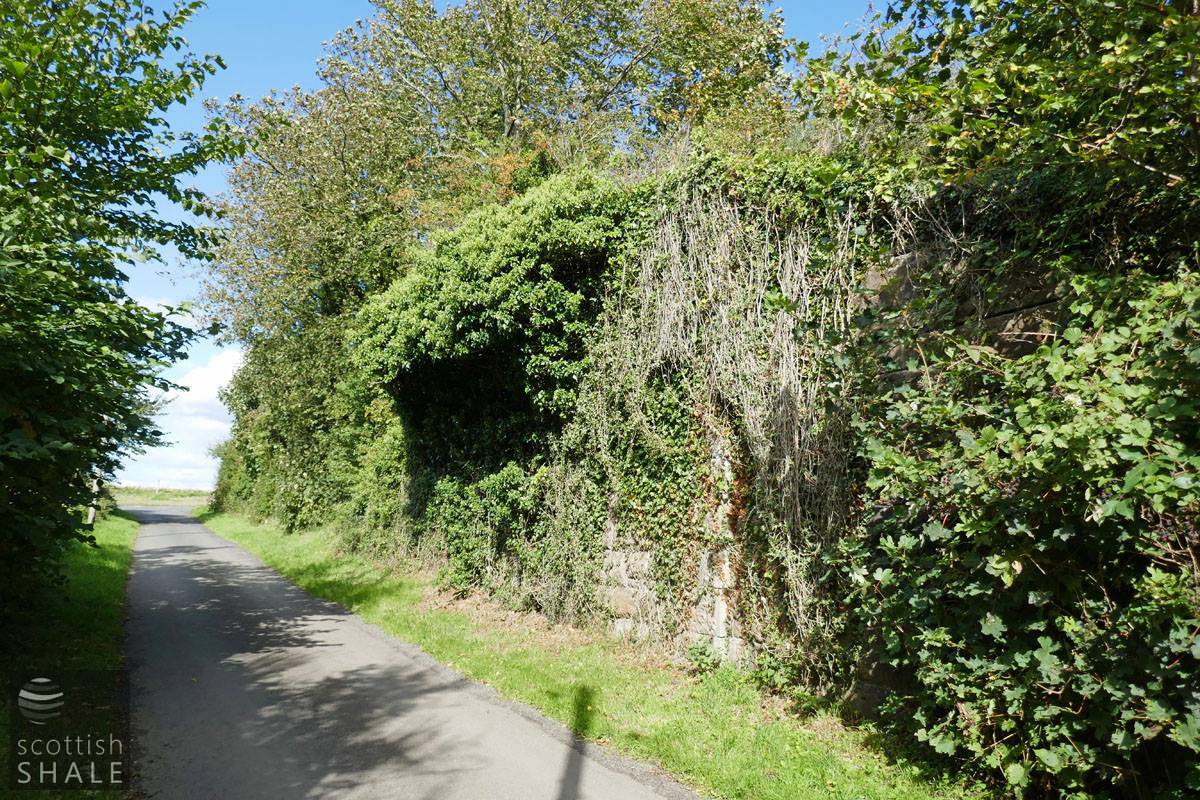 Sturdy bridge abutments survive, beneath the foliage, on either side of the road to Birdsmill. 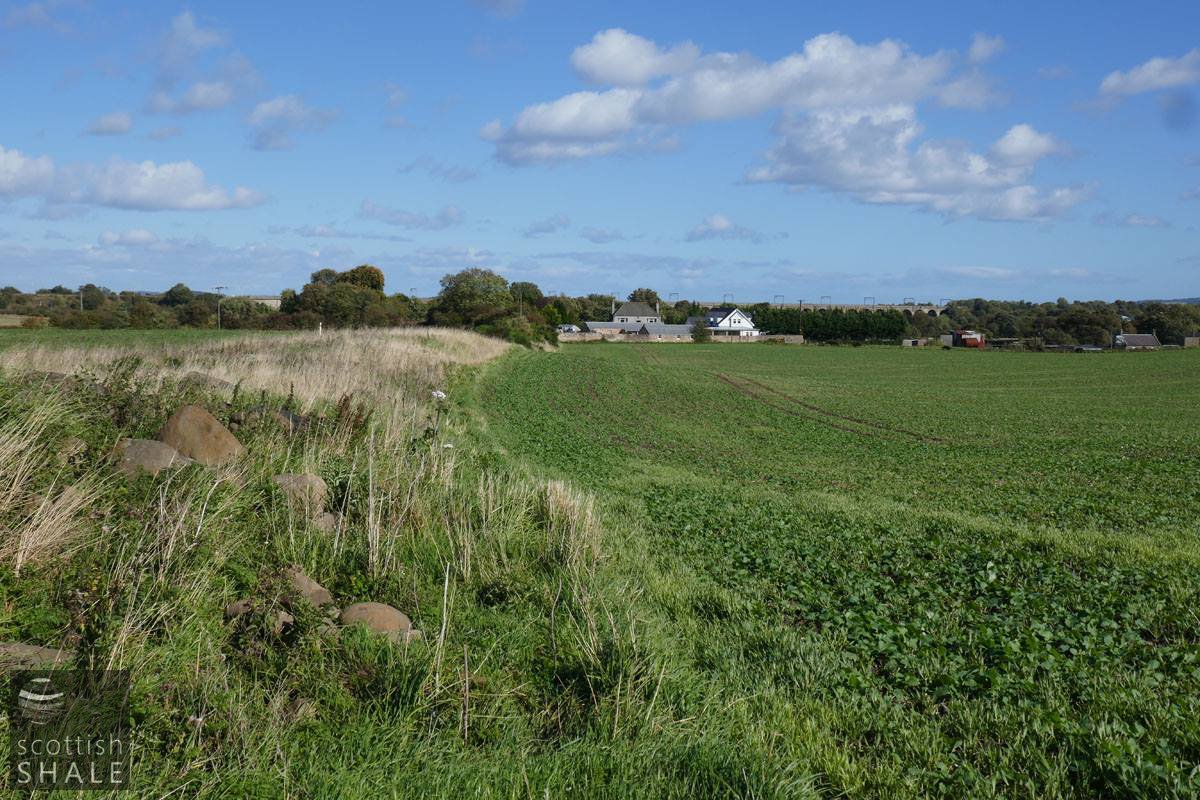 Route of the railway looking east towards the viaduct. 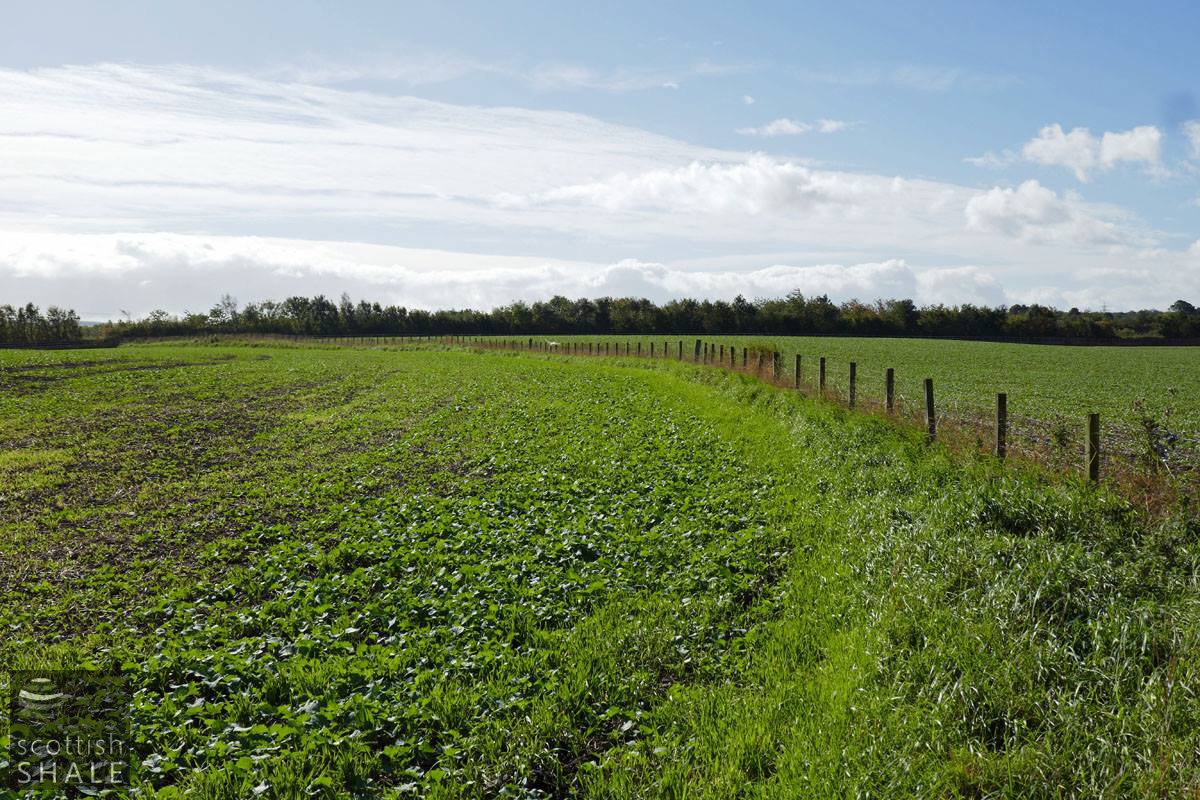 The route westwards, looking towards the M8. surviving only as a field boundary.