6" OS map, surveyed c.1854, showing the site of the quarry and the tramway climbing to valley slope to reach the "Glasgow Turnpike" road between Armadale and Blackridge. Some of the quarry workers lived in Barbauchlaw Row. (map image courtesy of National Library of Scotland).

A freestone quarry, producing a good quality sandstone for building purposes, was established close to the Barbauchlaw burn, about a mile west of Armadale, during the first part of the 19th century. No mention was made of the quarry when the Barbauchlaw estate was offered for sale in 1830, but by 1854, when the first ordnance survey map was produced, it seems to have been a significant operation. The 1854 map shows a tramroad linking the quarry to the Glasgow Turnpike road from where the sandstone blocks would have been loaded onto horse and carts. The quarry continued in operation into the 1880's, latterly operated by Robert Fleming & Co., and seems likely to have supplied much of the building stone for the rapidly developing town of Armadale. The 1896 map shows operations abandoned with no trace of the tramroad, however the quarry seems to have been reopened c.1903 to supply building stone for the new Armadale school, but was again marked as abandoned on the 1910 map. 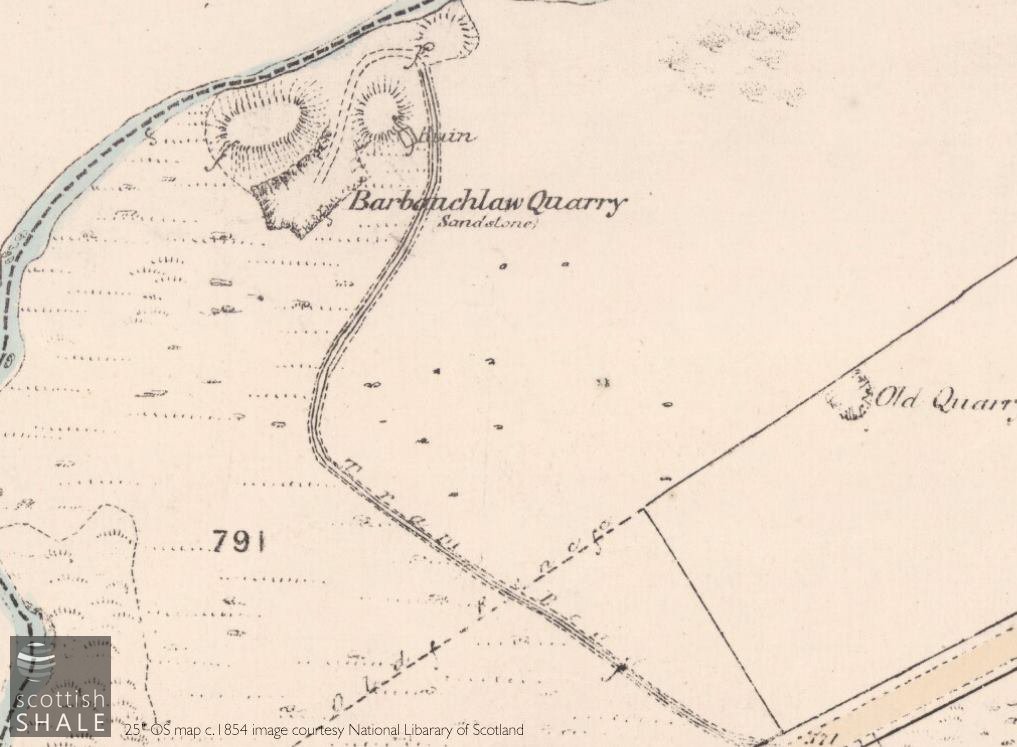 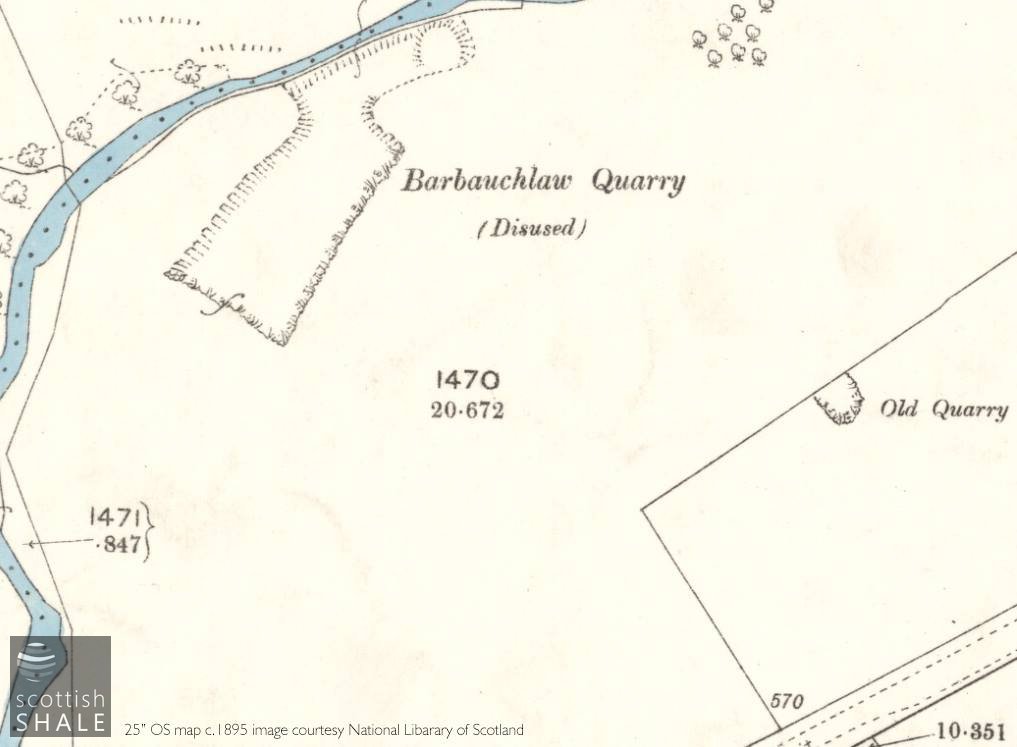 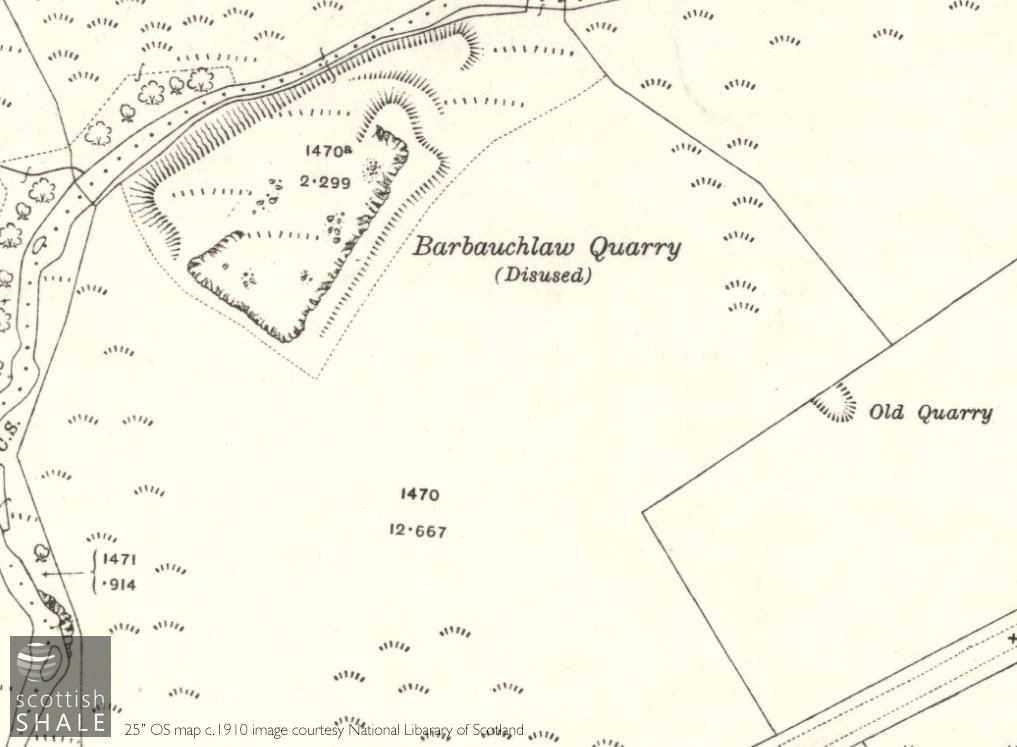 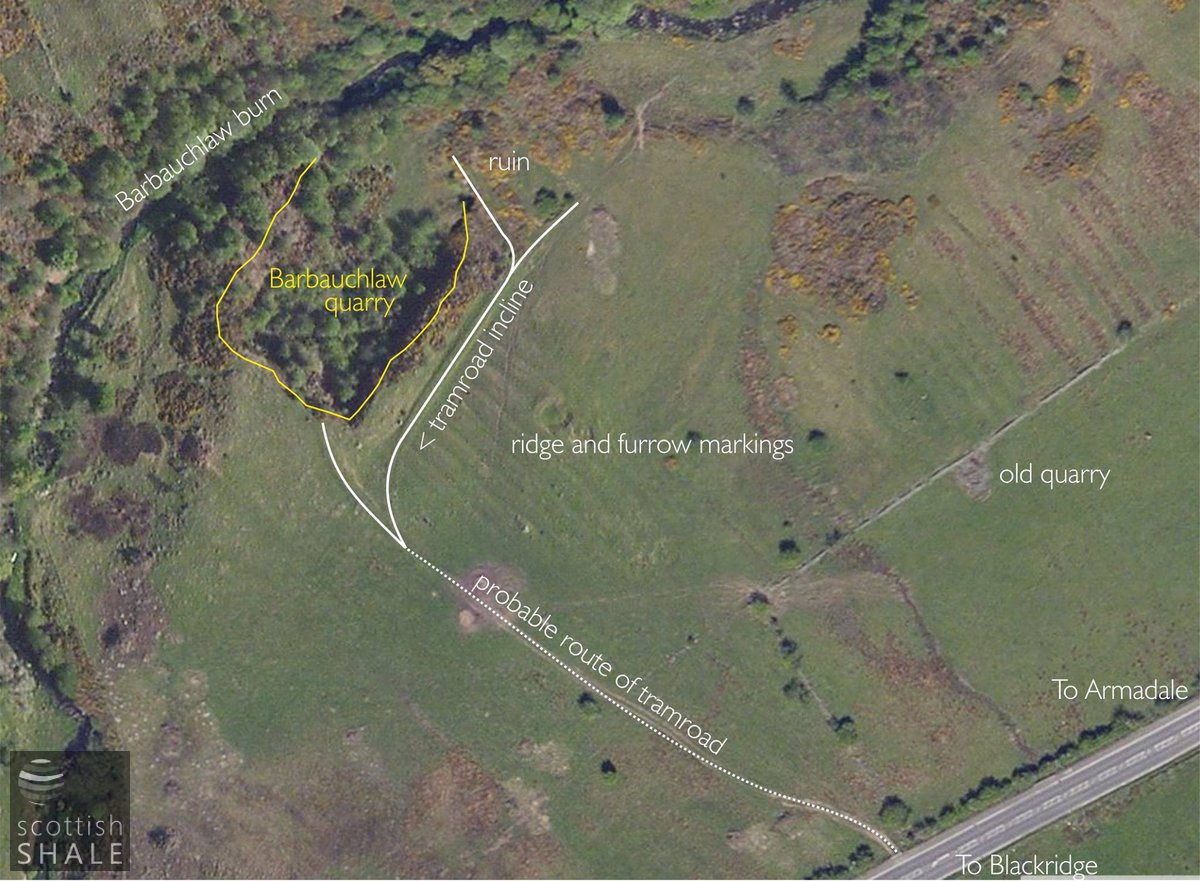 Aerial view showing features with clear surviving earthworks of the tramroad marked by the solid white line, and the dotted line representing areas where the route is less clearly defined.

The final phase of quarry operation. 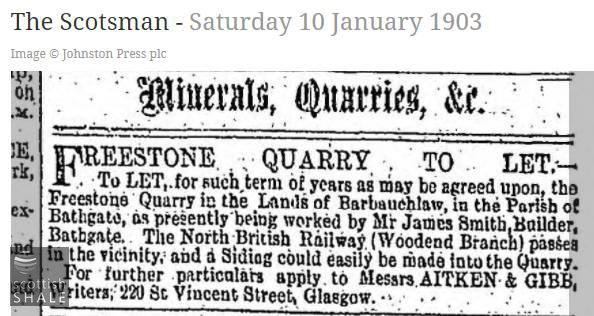 Advertisement for the quarry, indicating the opportunity to link quarry workings by rail to the Woodend branch.

View looking eastwards along the A89, towards Armadale, with location of quarry and route of tramway indicated. 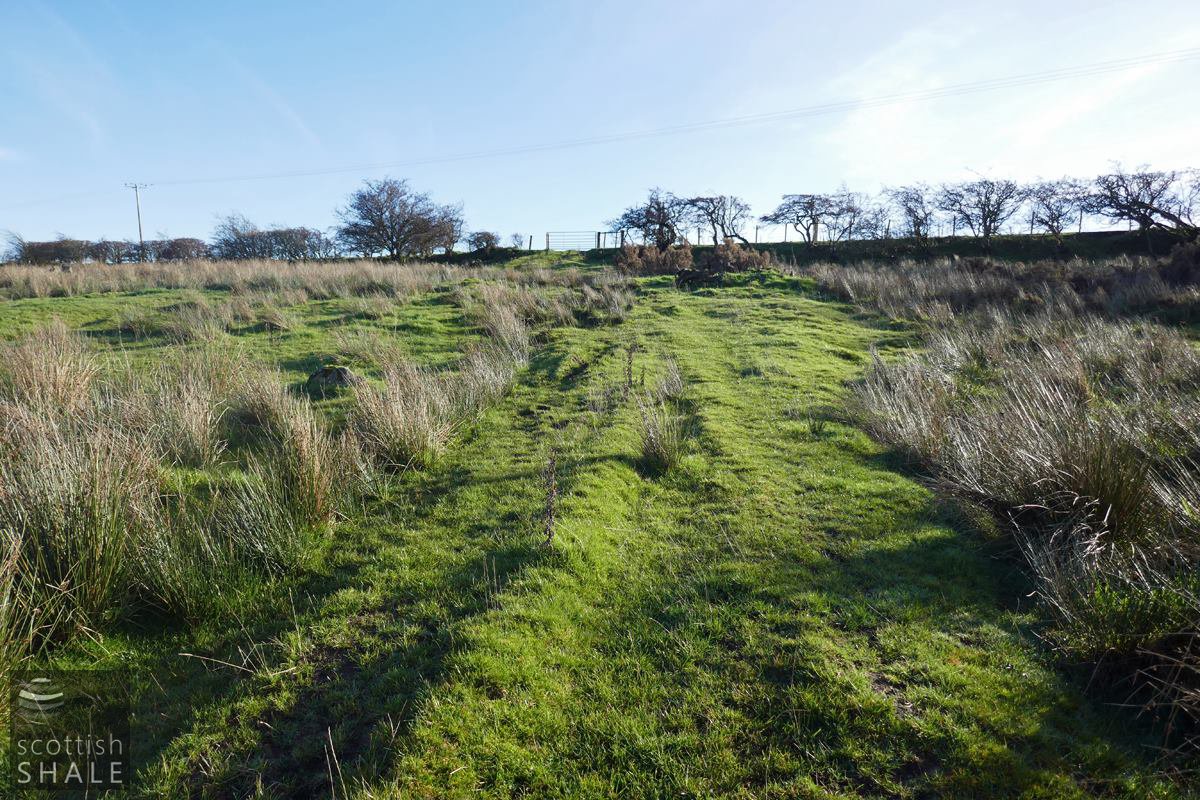 View looking eastwards along the A89, towards Armadale, with location of quarry and route of tramway indicated. 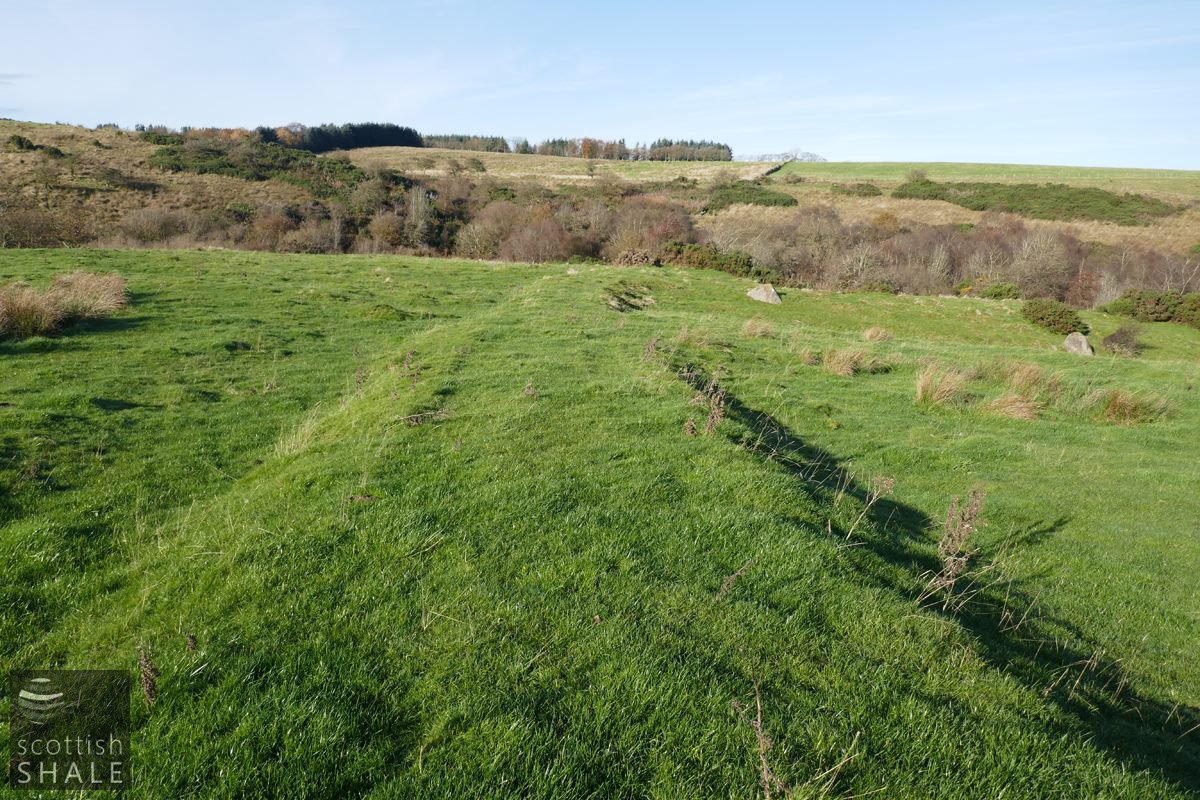 Top part of the tramroad looking south towards the A89 which runs along the hedge-line.

Route of the tramway, looking north towards the Barbauchlaw burn, with the steeply inclined route to the quarry floor heading off to the right.

The quarry still remains, now filled with mature trees, and the route of the lower parts of the tramroad can still be clearly traced. As maps show no trace of an engine house, it seems likely that it was left to teams of horses to haul the wagons of heavy standstone blocks up the steeply inclined tramroad. The route of this tramroad cuts across a much older landscape in which the mediaeval ridge and furrow field system is still clearly visible and the remains of stone walls mark enclosures and boundaries that were abandoned long before the first OS maps. 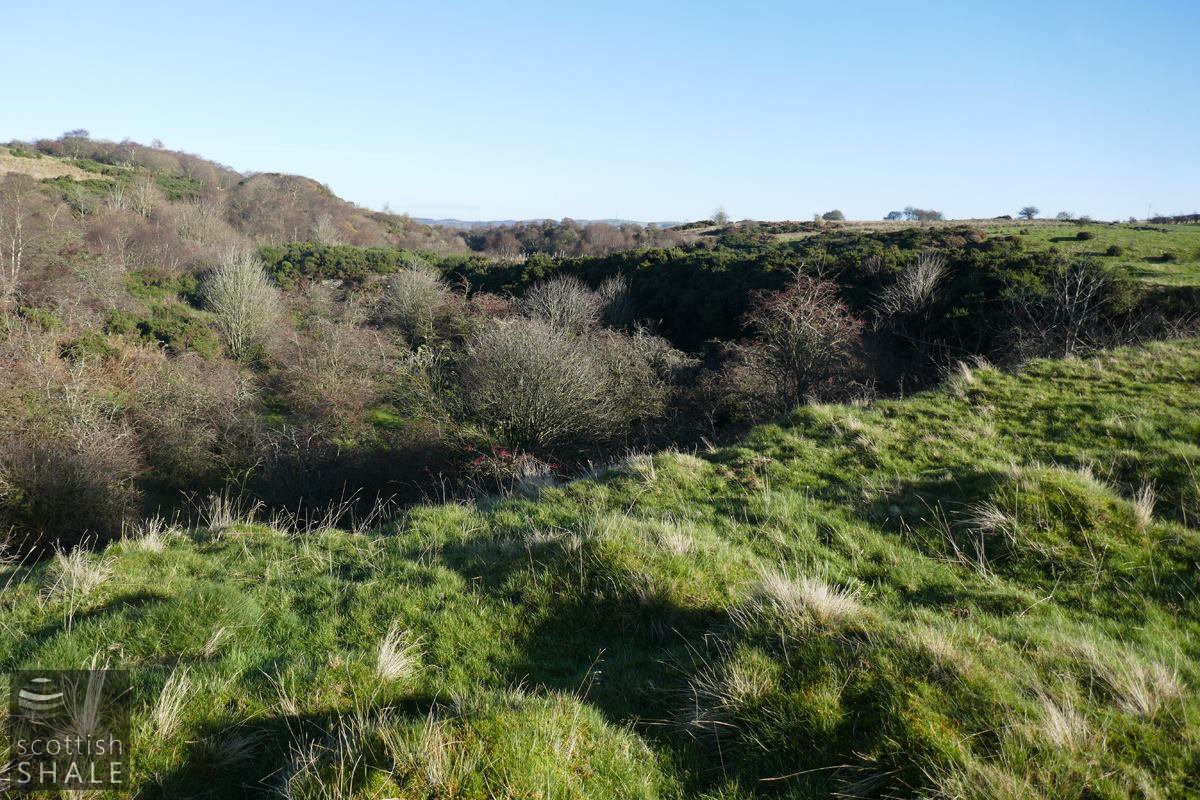 The rim of the quarry, looking east. 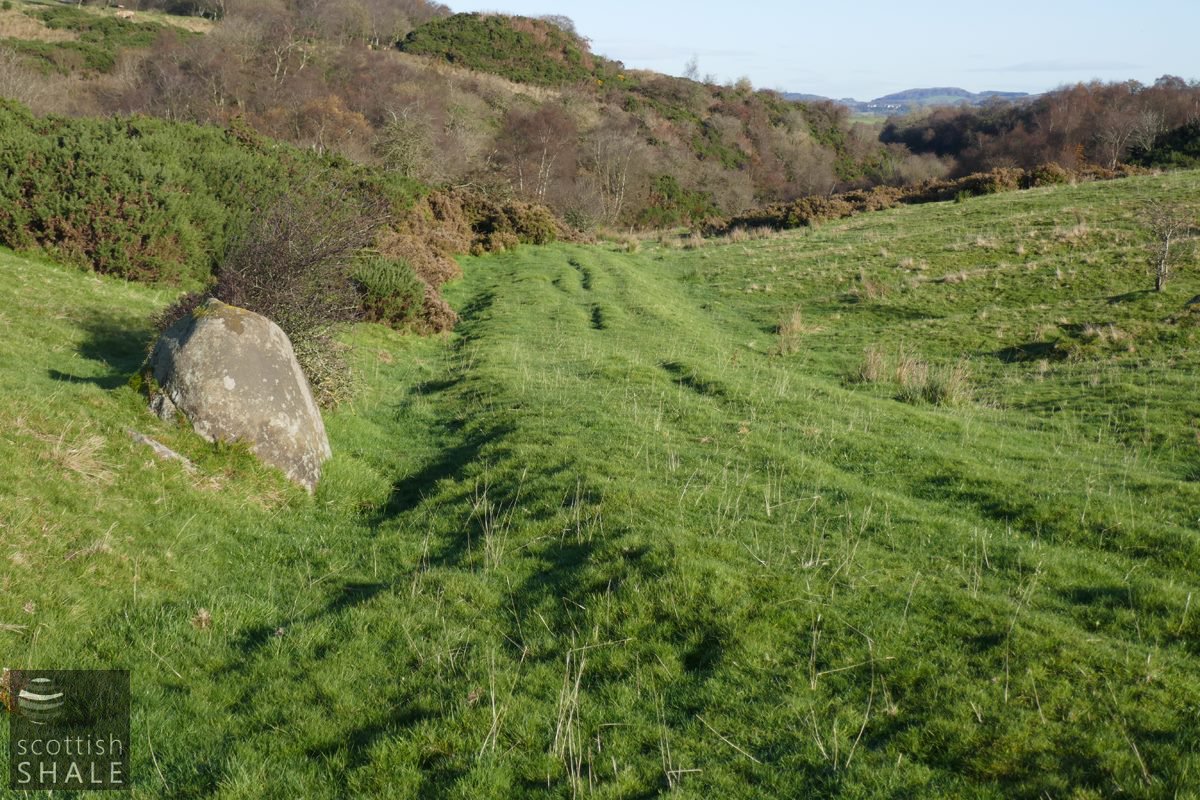 The steeply inclined route of the tram road heading to the quarry floor. 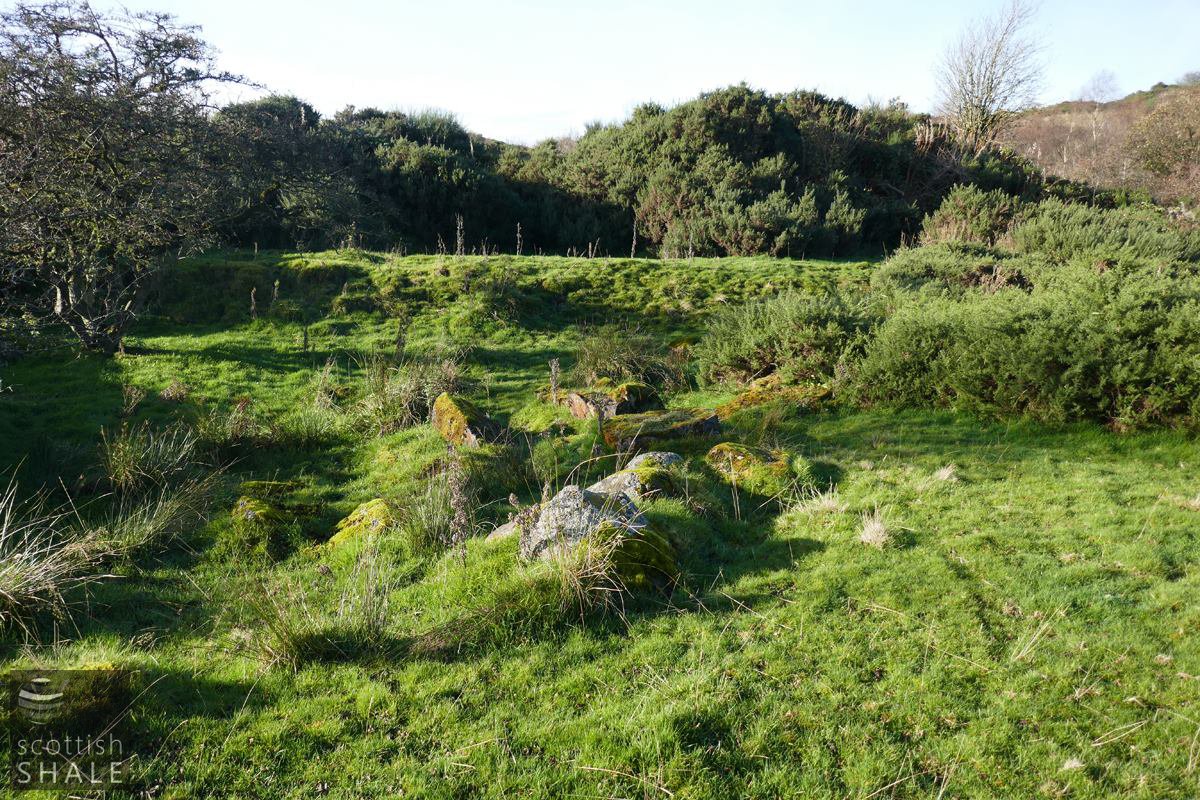 The route of the tramroad that curves off at the foot of the incline, with stones perhaps marking the site of the "ruin" marked on the 1854 map. 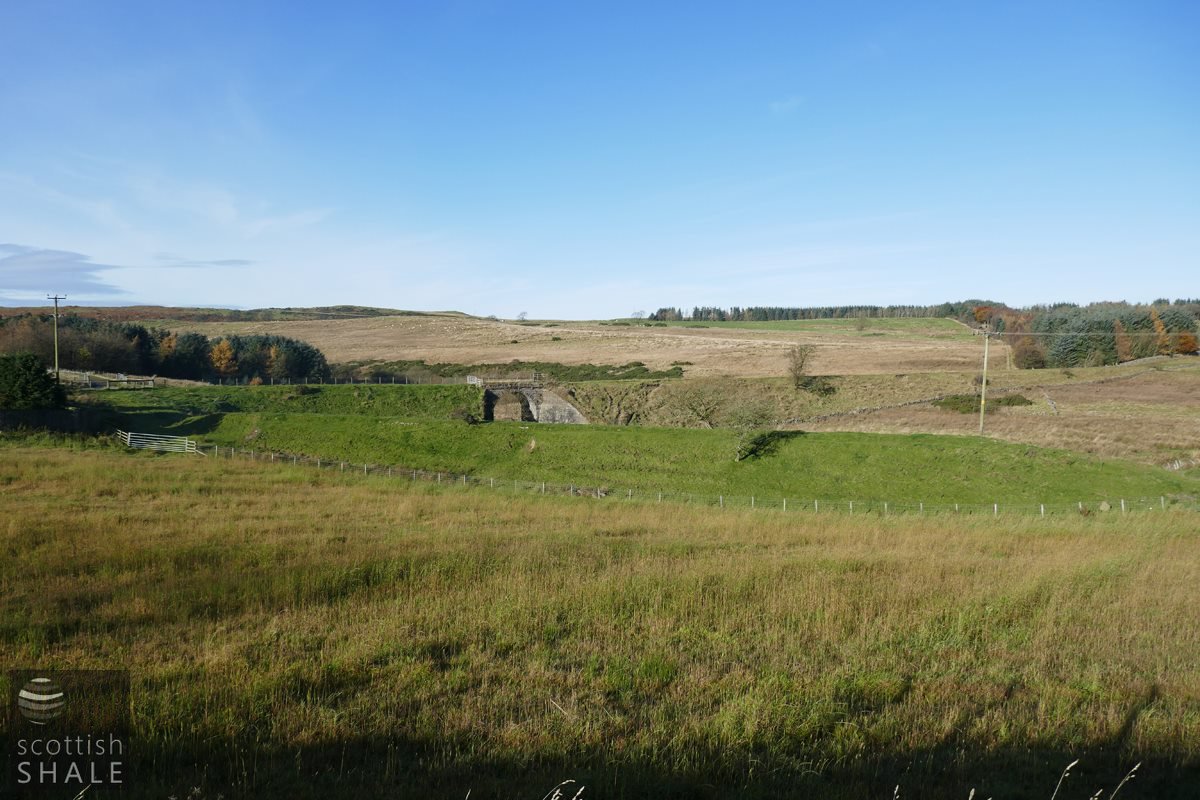 The route of the Monklands railway branch to Woodend, with a fine stone bridge crossing the Barbauchlaw burn. The purpose of the spur of railway on the embankment in the foreground is unclear. No rails are shown along this route by the time of the 1895 map. The suggested railway link to Barbauchlaw quarry seems likely to have linked to this spur.