Treading the Boards in Broxburn 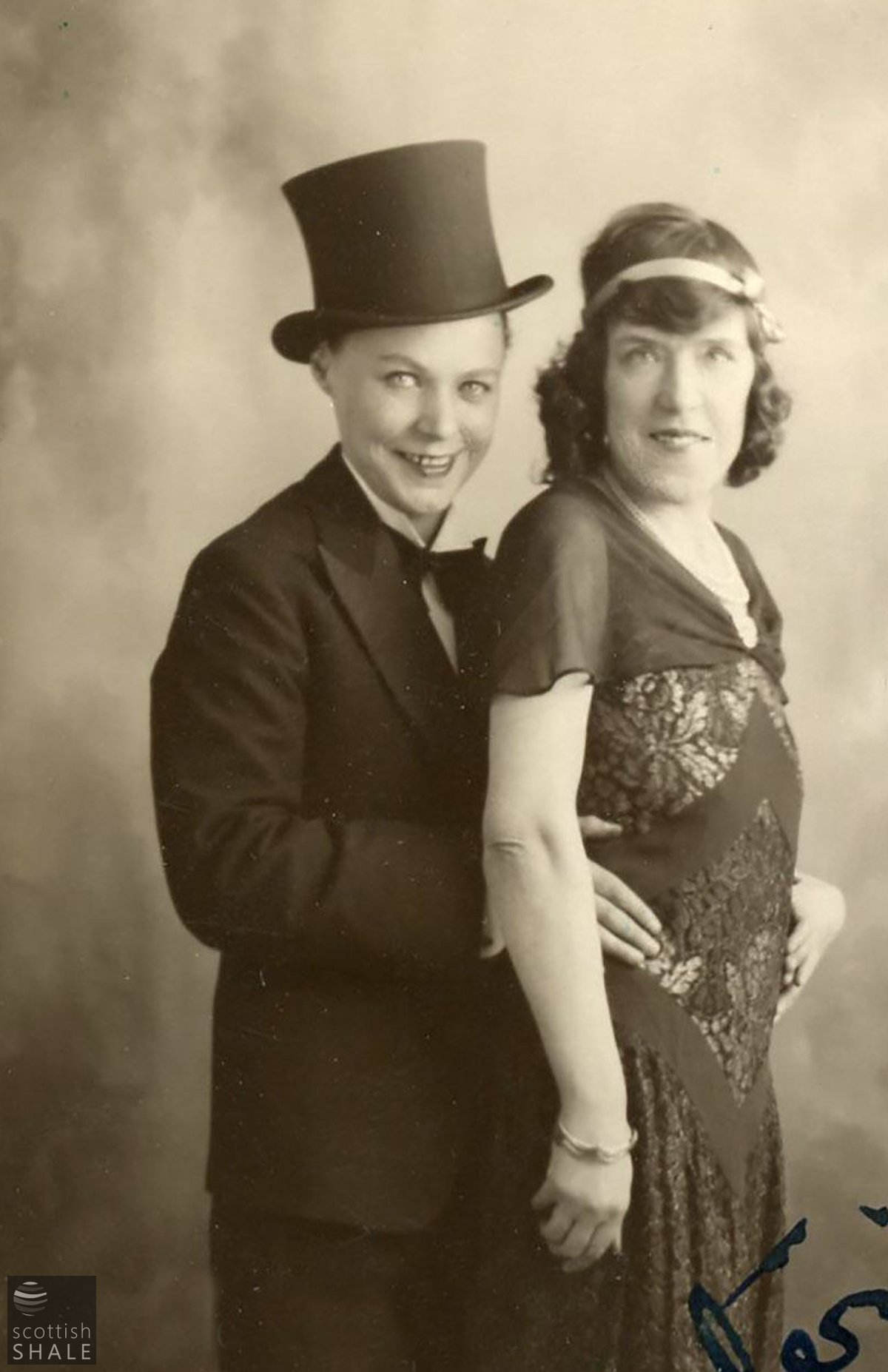 Signed "The Tilly Sisters" and dated June 1933, this seems to be Dorothy and Jeanette, as they would have appeared at the Central Picture House. See LVSAV2021.035 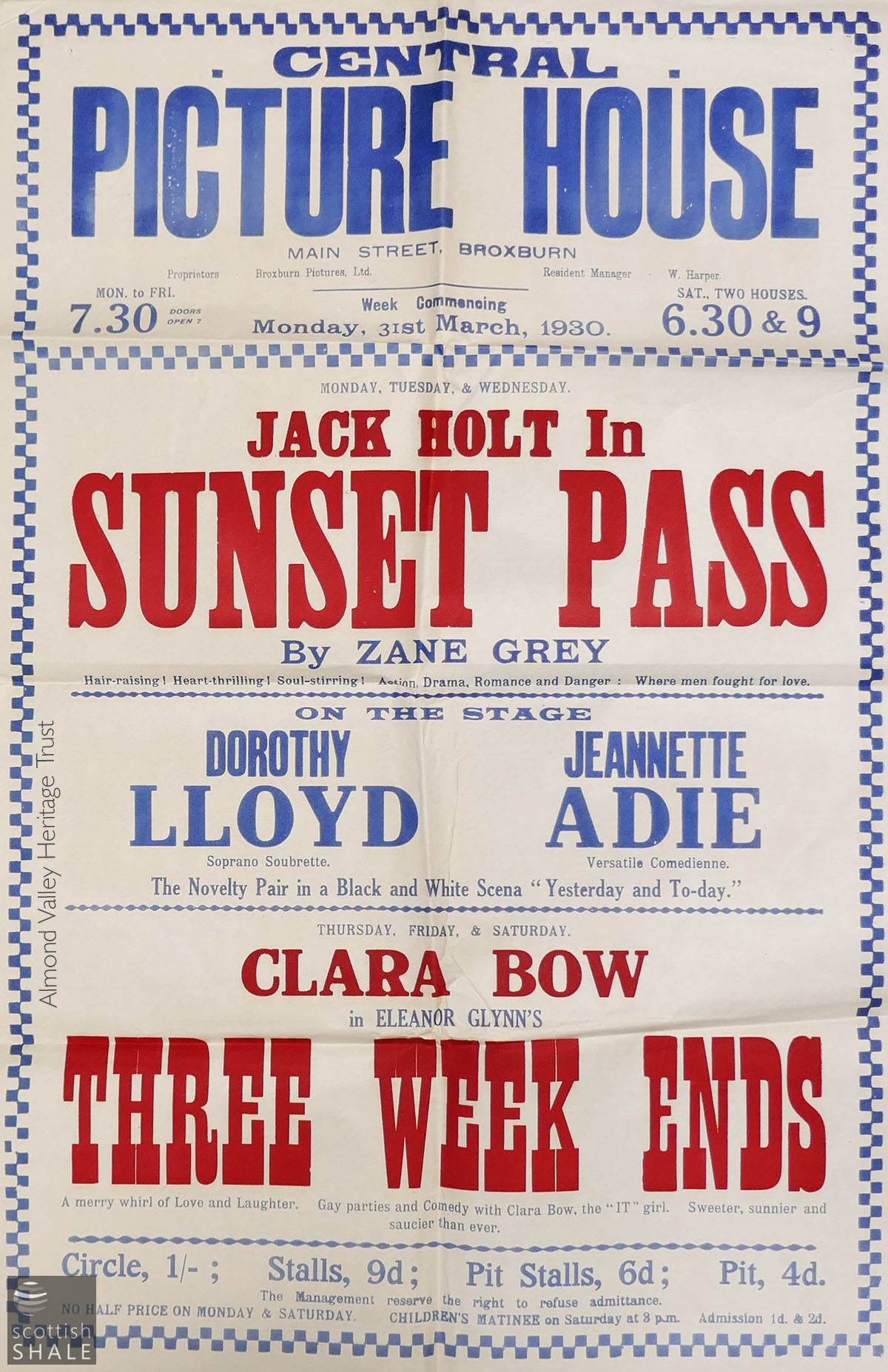 Bill poster from March 1930, with one of the last "vaudeville interludes".
Jeanette seems to have acquired an additional "n". See LVSAV2019.205 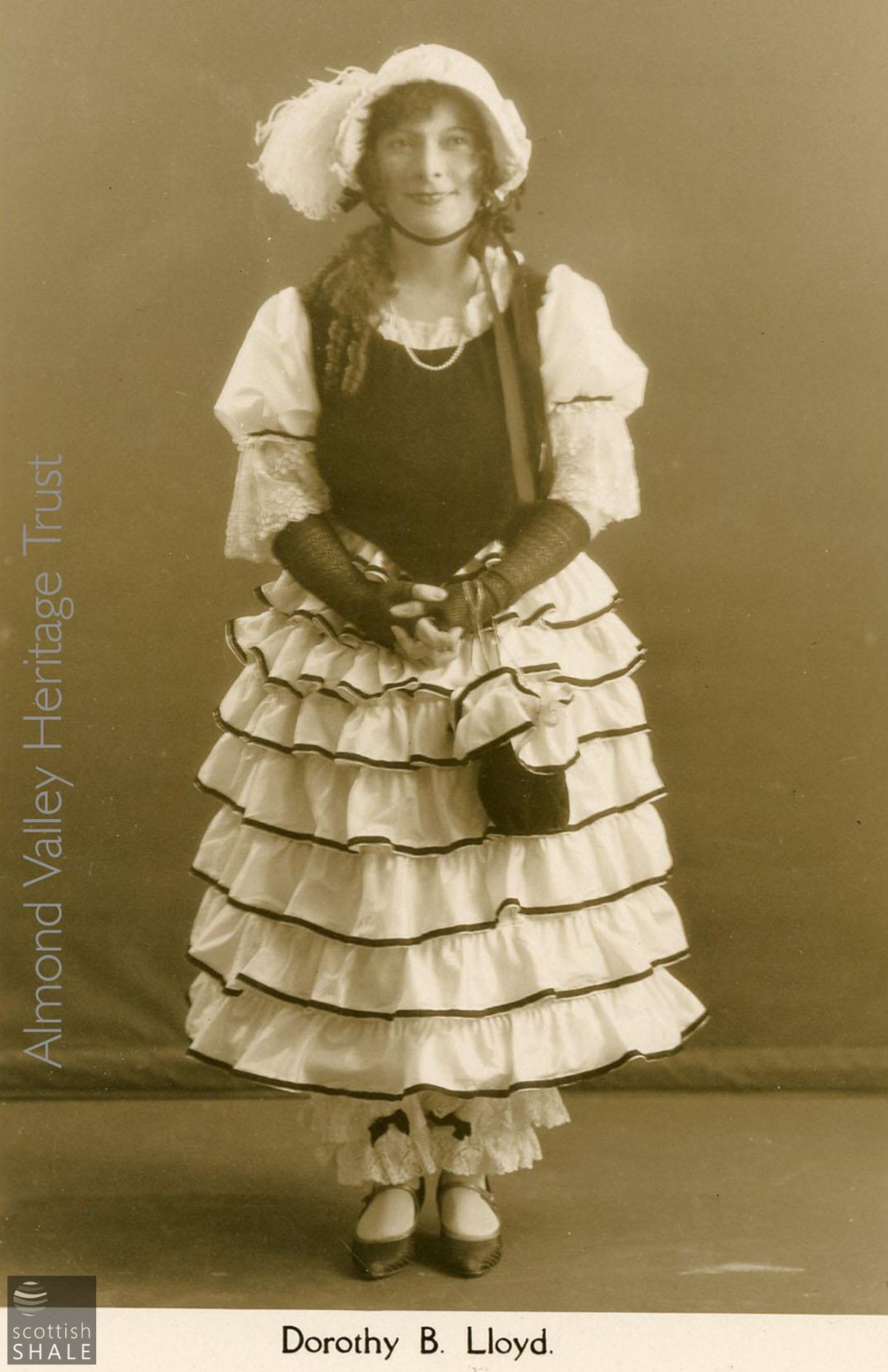 Dorothy in her usual guise as a soubrette "a comedy character who is vain and girlish, mischievous, lighthearted, coquettish and gossipy". See LVSAV2021.032

Broxburn’s first purpose-built cinema opened in 1913 on a narrow site set back slightly from East Main Street. Seating 1,100, the Central Picture House was the largest entertainment hall in the area and, as was usual at that time, was equipped with a small stage and dressing rooms for live performances.

In 1923, Broxburn Pictures Ltd., appointed an energetic new manager. Willie Harper had no previous experience in cinema, but seems to have been a great showman with a gift for publicity. He “quickly established himself in the good graces of the oil town” and his imaginative schemes and stunts ensured full seats at the picture house. He introduced nostalgia evenings at which old films of past gala days were shown, hosted recitals of popular classical music, and staged benefit concerts to raise funds for the gala day. On one occasion, when a power-cut plunged the picture house into darkness, the resourceful Willie quickly spirited up an appropriate number of miner’s lamps, took to the stage, and entertained all with his wit and patter until the lights came back on.

Willie’s greatest achievement was perhaps the re-introduction of a vaudeville interlude, in which live acts provided the entertainment between the films. This throwback to the earliest days of the kinematograph came at a time when most cinema owners considered live performances to be outdated and too much of a bother. Our bill poster for the Central Picture House, for the week commencing 31st March 1930, illustrates this vaudeville tradition. The main picture was a Hollywood western, or later in the week, a saucy comedy staring the “IT” girl, Clara Bow. Both silent movies would have had a piano accompaniment. The live entertainment was provided by Dorothy Lloyd (described as a soprano soubrette) and Jeanette Adie (a versatile comedienne), seasoned performers who presented an act well rehearsed at summer seaside shows. An account of their seaside act recorded “Miss Lloyd sings her way into favour….Miss Adie’s low-comedy studies are gems of humour, while she scores further hits with male character numbers”. ”The two artists also combine successfully in duets”.

The performance marked the end of an era. In March 1930 work was already underway to install sound equipment at the Central Picture House (using the Scottish “Bestalk” system) in order to show the latest talking pictures. Silent movies, piano accompaniments and vaudeville interludes were soon consigned to history. This was all too much for Willie, who surprised all by resigning as cinema manager early in 1931.

The bill poster only survives as it was retained as a memento by the “soprano soubrette” Dorothy Lloyd. The earliest references to Dorothy are as a “dainty young comedienne and dancer”, a member of “The Bohemians” concert party performing in music halls, parks, and end-of-the-pier shows during 1911. The concert party was led by Leo Bliss, one half of comedy act Bliss and Bliss. Love blossomed and Dorothy and Leo were married in 1912.

The couple always shared the bill, but never worked together as a double act. In summer Leo would assemble the “Busy Bees” concert party for a summer season in the parks or links of a seaside resort. From about 1915 until 1929, the Busy Bees regularly entertained summer visitors to Carnoustie, and in later years were resident at the Beach Pavilion in St. Andrews. Winter brought the prospect of regular work in a pantomime, and often Leo secured the role of principle comedian while Dorothy played the principle girl. In the hungry gaps of spring and autumn, the couple toured the music halls and theatres of provincial Britain, picking up whatever work they could.

In January 1924, the couple were appearing in Robinson Crusoe at the Alexandra Theatre in Birmingham, with Leo playing the role of Billy Crewe and Dorothy the dusky princess. Returning to their lodgings at about midnight, Leo was suddenly taken ill and died within a few hours of “double pneumonia”. The couple had two children, the youngest only six months old at the time. In accordance with Leo’s dying wish, Mrs Leo Bliss’ Busy Bees appeared later that year for the usual summer season at Carnoustie

As proprietor of the Busy Bees, Dorothy was keen to nurture young talent. In the late 1920’s Jeanette Adie – billed as “the rising Vesta Tilley”- joined the concert party, delivering songs and jokes, usually as a male impersonator dressed in top hat and tails. Outside the Busy Bees’ summer season, Dorothy and Jeanette toured together during the early 1930’s as a novelty pair in “Yesterday and Today”, with Dorothy still playing the soubrette and Jeanette dressed in male attire, singing popular songs of the day, and 19th century favourites.

Jeanette went on to join the Rothesay Entertainers whose summer shows were broadcast live on BBC radio from the Winter Gardens. She appeared as “the ideal male” in variety shows at leading theatres, and was an essential principle boy in pantomime. She was particularly associated with pantomimes at the Princess’ Theatre in the Gorbals that became something of a Glasgow institution. When she died in 1992, at the age of 85, she was celebrated as “one of Britain’s best known pantomime principal boys”.

Dorothy continued to produce the Busy Bees summer shows at St Andrews until at least 1937. The previous year she married comedian Arthur R. Carlton, who had been a close friend of her late husband. The ceremony took place in Bournemouth where Arthur was playing the principle dame in “Dick Whittington and his Cat” at the Pavilion Theatre. The bridesmaid was a camel called Queenie, who was also appearing in the pantomime, and distinguished herself by eating the hedge of the registry office.

According to her granddaughter, Dorothy spoke little about her career on the stage in later life, but had a lasting love for Scotland and often referred to the happy times spent at the Cosy Corner in Carnoustie. 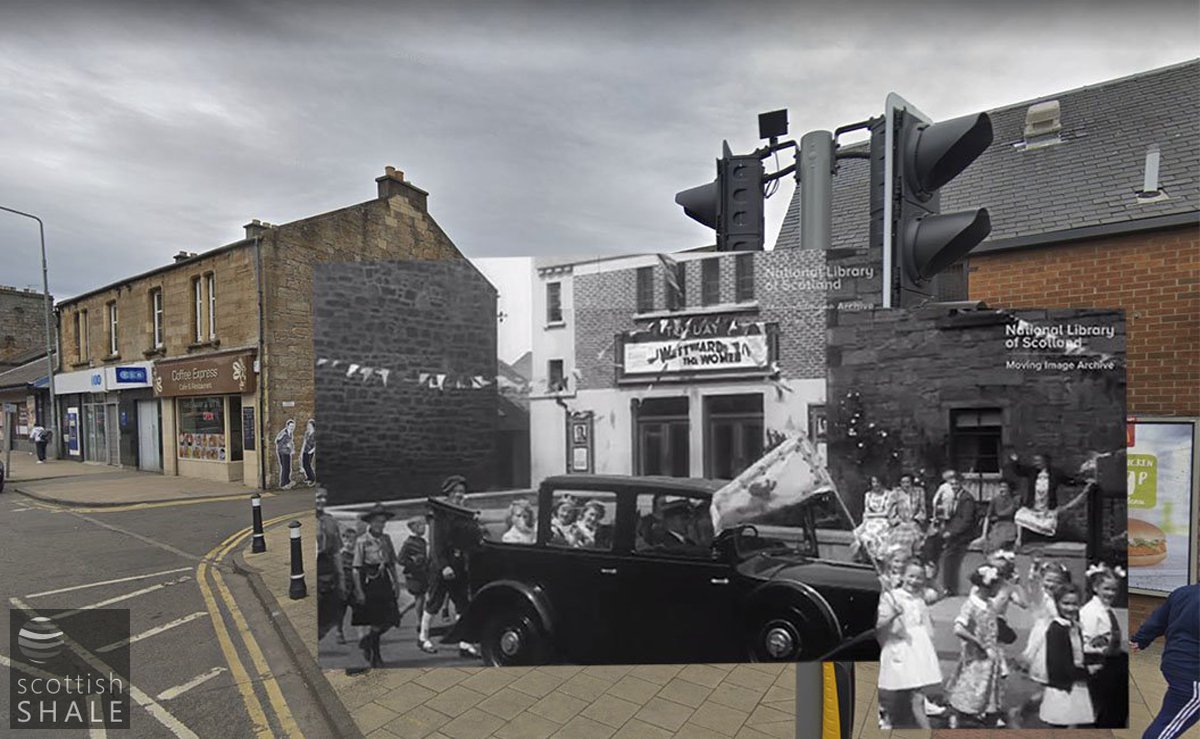 We've no image of the Central Picture House, but have superimposed a couple of frames from a film of the 1952 Broxburn gala day over a present day image.
Courtesy National Library of Scotland. 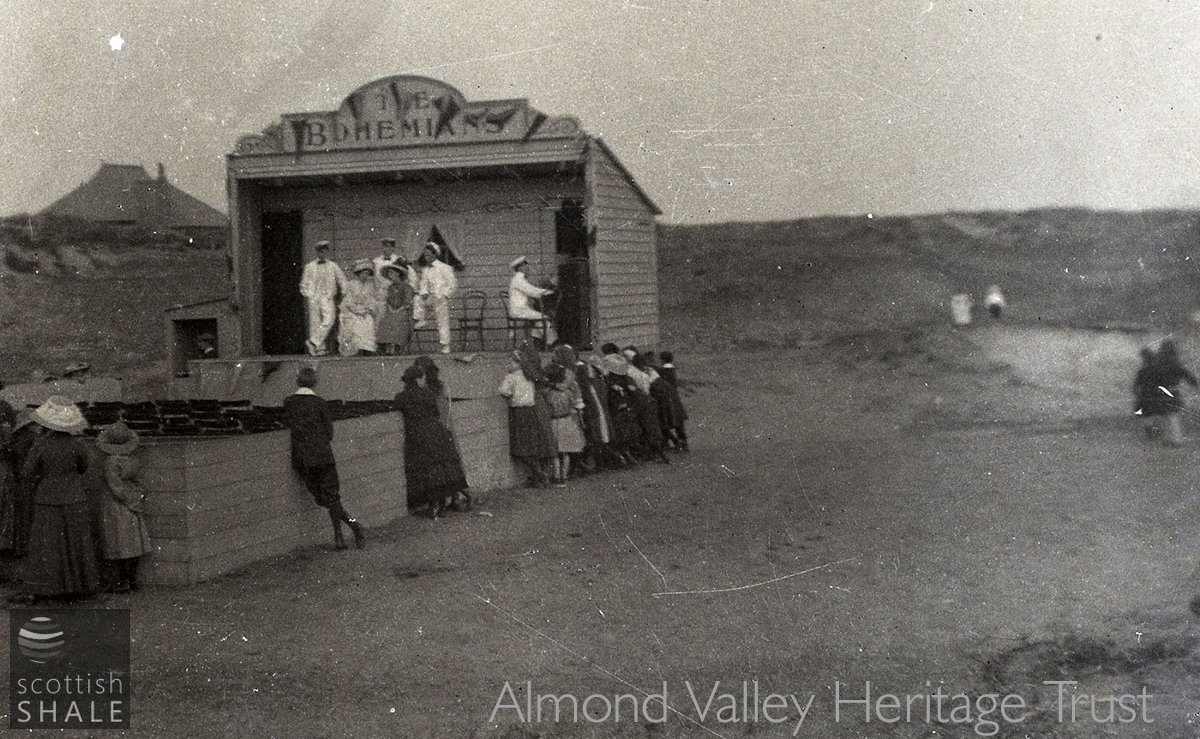 Scan of a scratchy glass negative purchased at a car boot sale, with no indication of its origins.
Might this be Leo Bliss' Bohemians, perhaps in the links at Carnoustie immediately prior to WW1? It's certainly a lovely seaside scene. 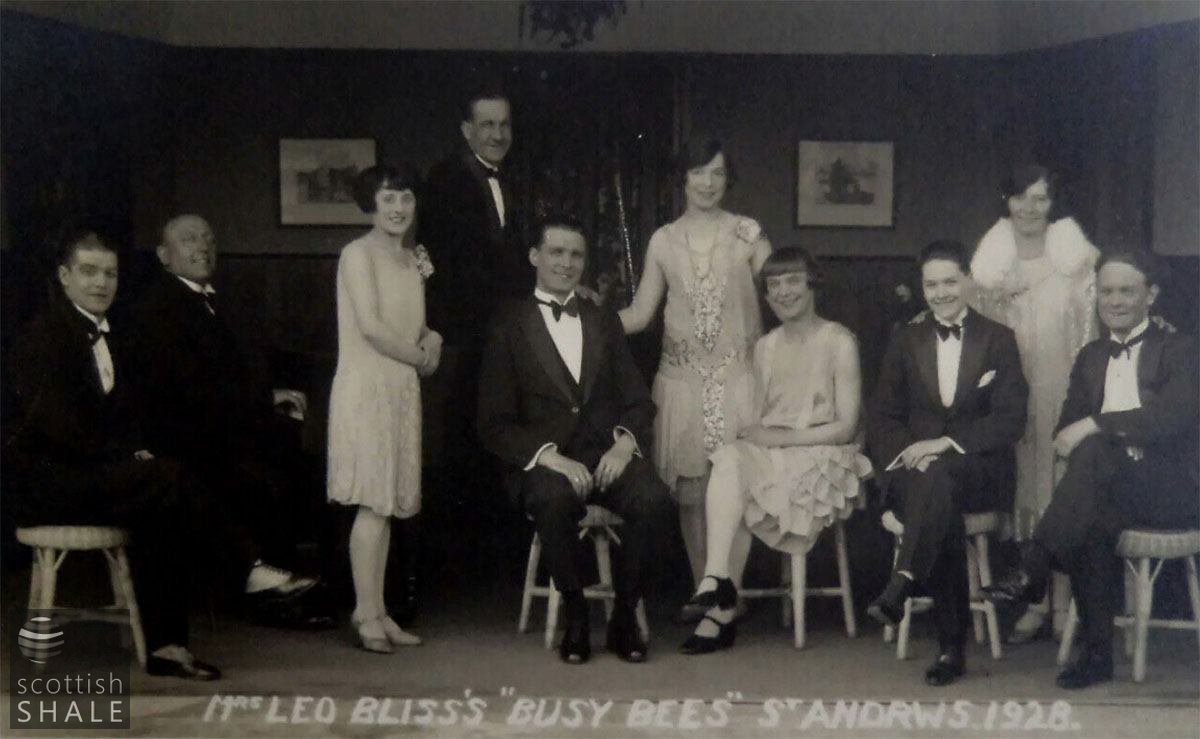 The Busy Bees in 1928. Dorothy - the boss - is seated in the centre, to her right is Jeanette in usual male attire. 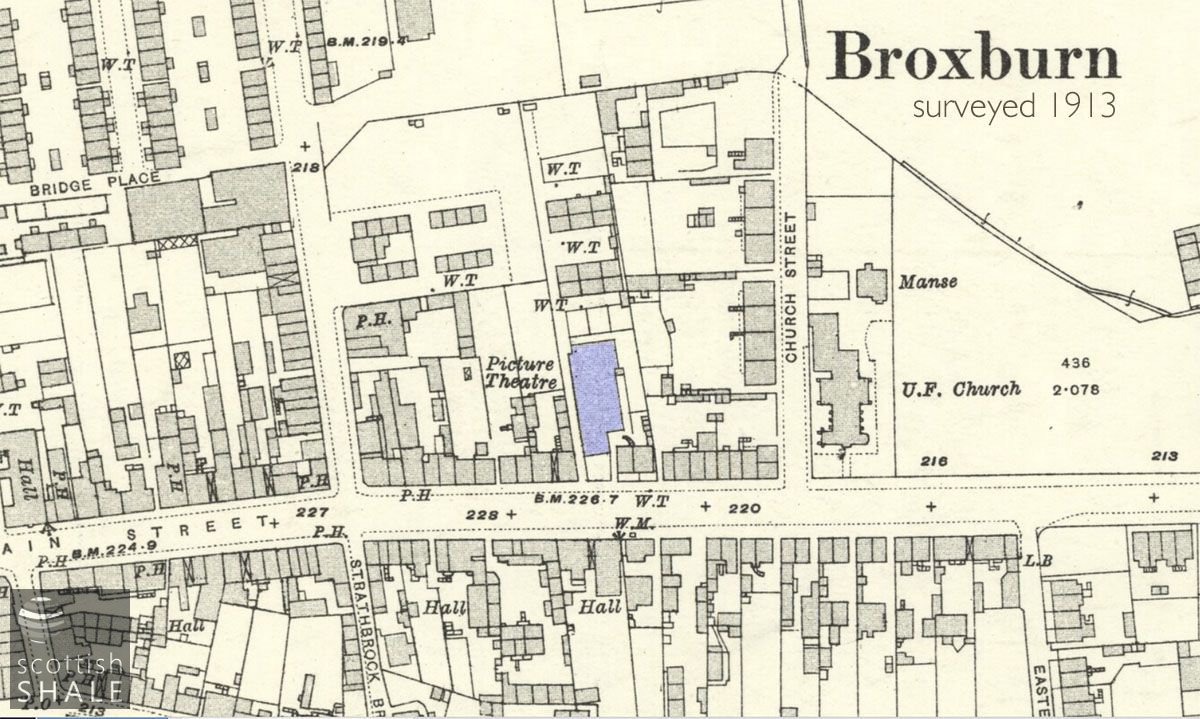 Location of the Central Picture House. 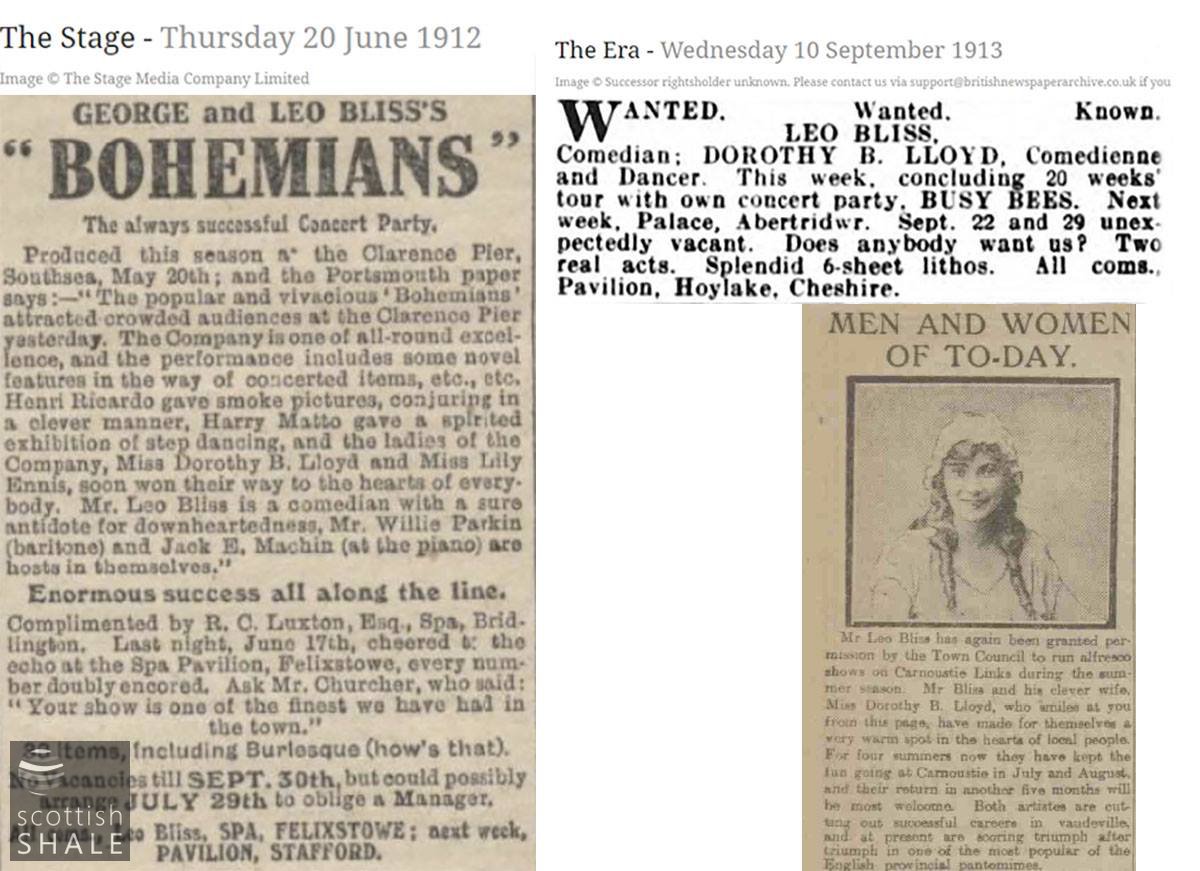