Trouble in a Garden City 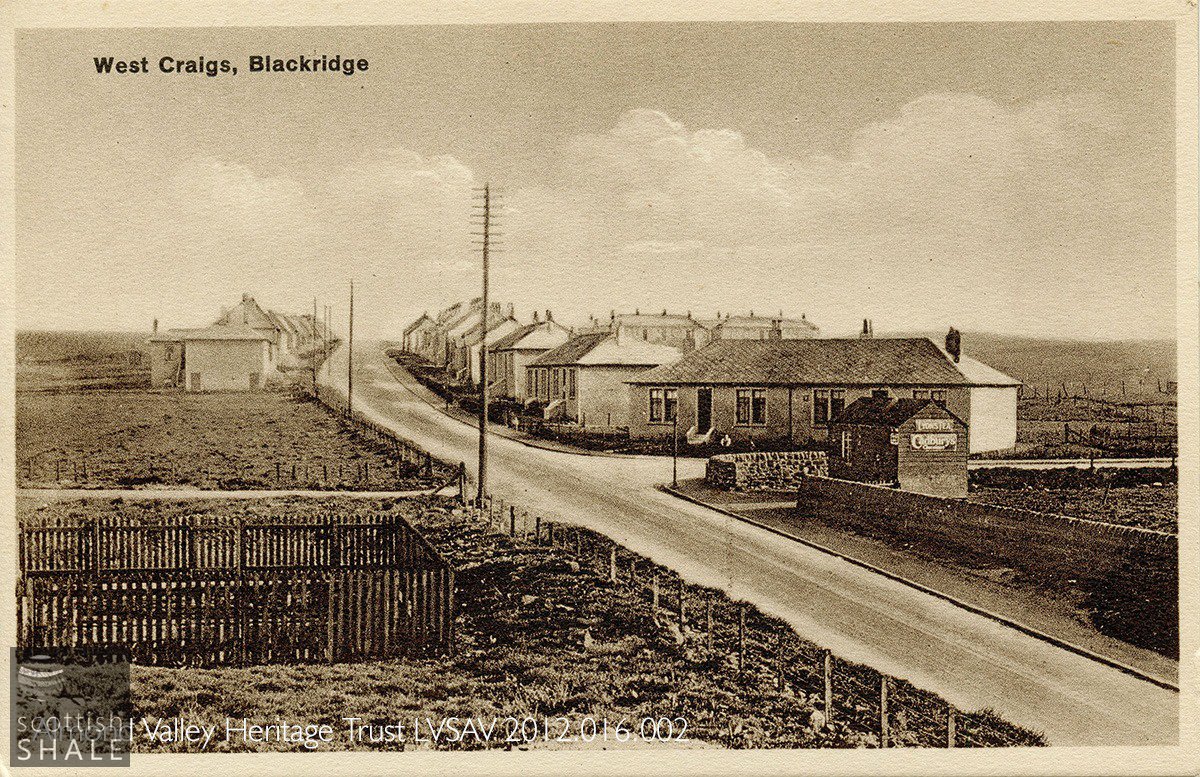 This area at West Craigs, either side of the road to Harthill, was presumably the planned site of the "Polkemmet" garden city development. This simpler, and more basic housing development was completed in the early 1920's by the United Collieries Co. 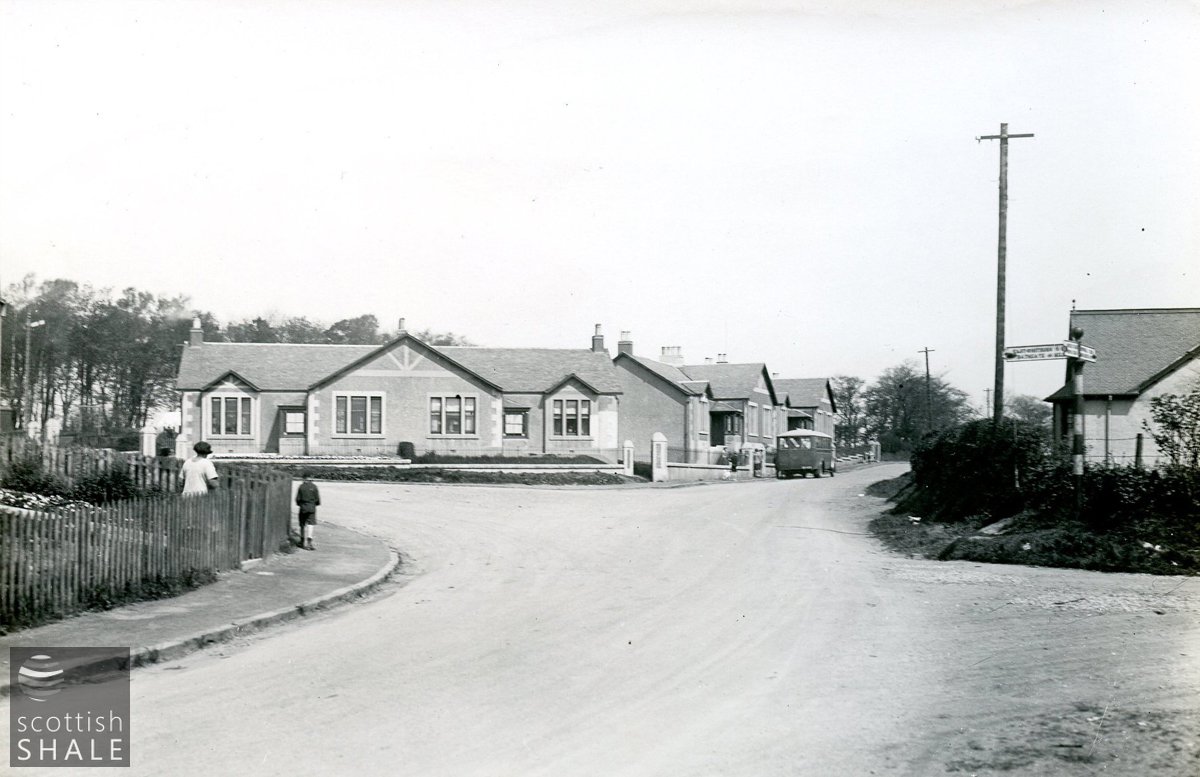 A view, photographed in June 1930, of United Collieries housing at Cannop Crescent, close to Bents station. This is probably the housing described in a report dated January 1920:

"Plan for 10 cottages of three apartments with scullery and bathroom to be erected by the West Lothian Housing Society at Bents. The walls of the houses at Bents are to be constructed of concrete double reinforced with bituminous core instead of a cavity centre. The ten houses are the first installment of a contemplated extension of the Bents Garden City. They are built of an entirely new principle, which has been approved by the Board of Health and, if satisfactory, further houses are to be built in the near future.

As the 19th century drew to a close, there were many calls to plan for a fairer society, reduce social inequalities, and eliminate the terrible housing conditions endured by many working folk.

Among various idealistic concepts promoted at that time was that of the “garden city”. The term was coined by Ebenezer Howard, who envisaged new planned communities in which housing, green spaces, parks and boulevards were carefully arranged to serve a content and productive society. His ideas were first demonstrated in 1904 with the development of Letchworth garden city, and had a huge influence on subsequent town planning. This experience went onto inspire the New Town movement, of which, of course, the new town of Livingston is a product. 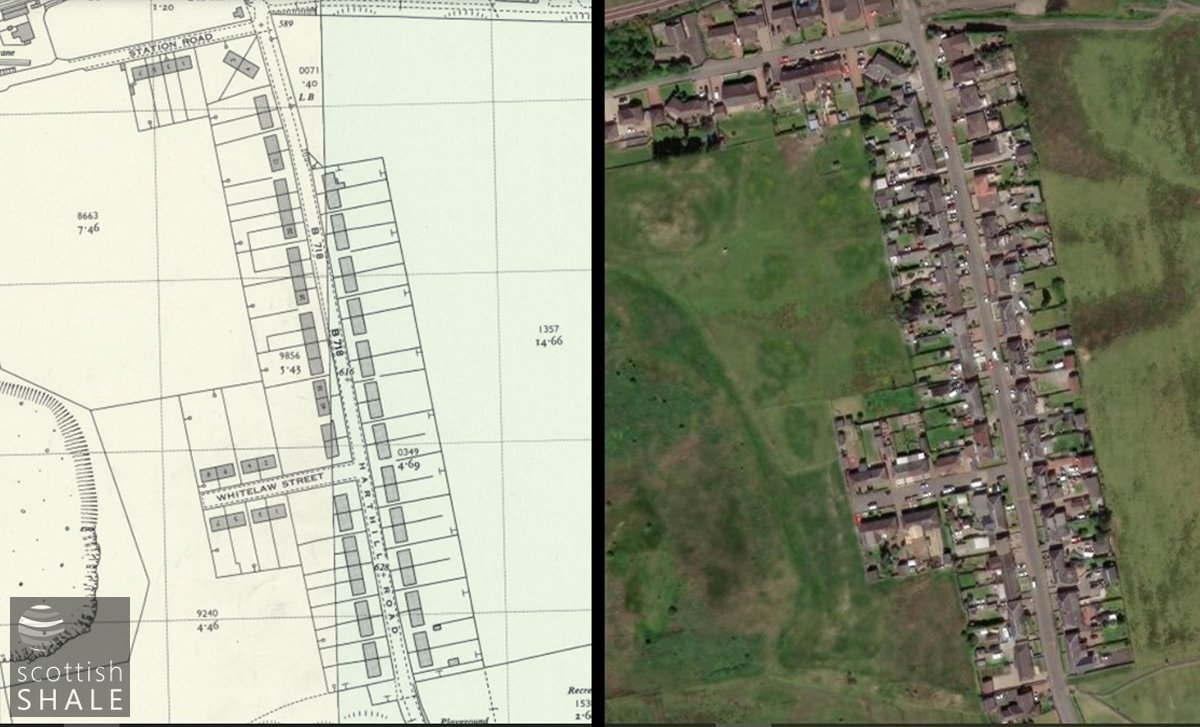 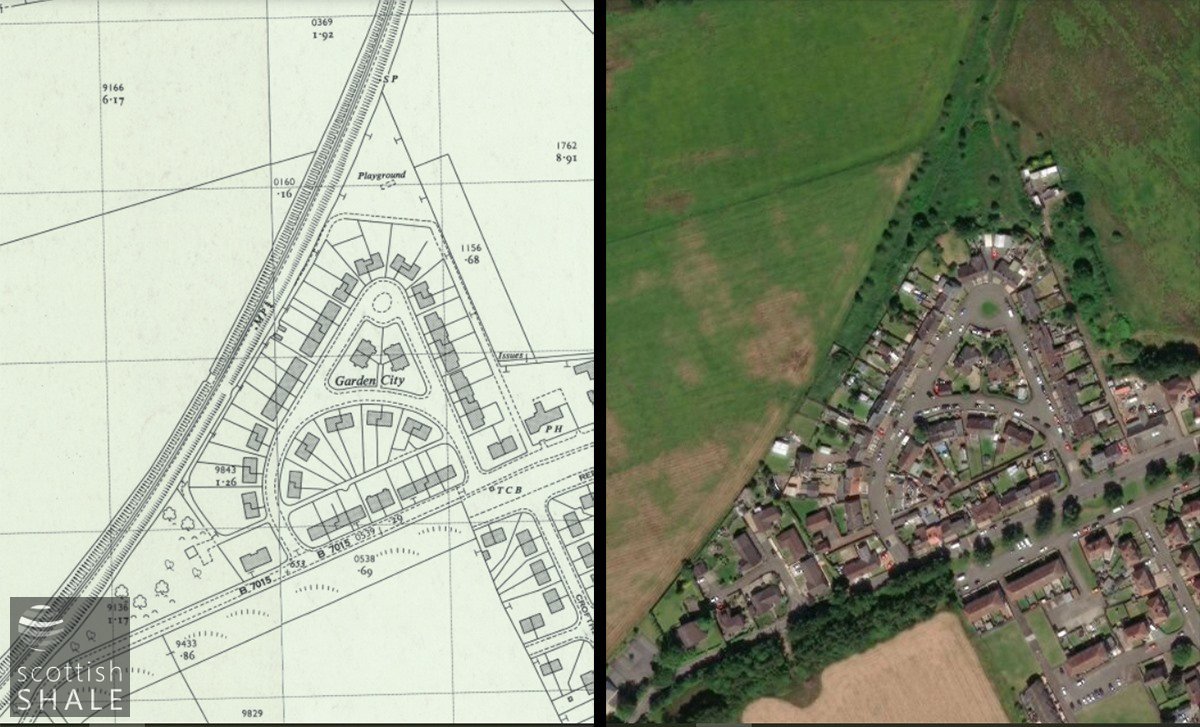 The term “garden city” caught the public imagination, and was soon being applied to all sorts of planned housing developments that incorporated a little bit of green space. In 1909 plans were drawn up for the new dockyard town of Rosyth, which was proclaimed as Scotland's first garden city,

In 1913, the recently-formed West Lothian Housing Society Ltd announced plans to build “ideal homes for the worker” that were “based on the garden city principle” at three locations close to collieries owned by the United Collieries Co. The housing society was established as a public utility society (the forerunners of housing associations) and benefited from cheap loans and other state support to assist “the erection of dwellings for the working classes”. The society, whose directors were described as “gentlemen interested in the progress of Armadale, Blackridge and Whitburn,” was promoted by United Collieries, and charged rent at a commercial rate. 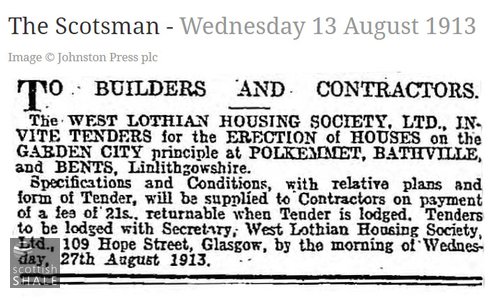 The three “garden cities” were intended to be at “Polkemmet” (seemingly in Westcraigs, Blackridge) consisting of 52 houses, Bents (60 houses) and Bathville (64 houses). At each site there would be a mixture of housing in blocks and double cottages, with homes containing either a single room and kitchen, or two rooms and kitchen. At that time most housing in mining districts was still being built following the Scottish tradition of long rows of houses, with some shared amenities and communal space surrounding all homes. The garden city homes were no larger or better equipped from than rows being built at that time, but differed by being laid out in curves and crescents rather than the old rectangular arrangements. Most significantly however, garden city homes had private front and back gardens separated by a “strong dividing fence”. It was hoped that this private space would encourage tenants to “take a pride in keeping everything inside and outside the house, clean and tidy”, and that dividing fences would ensure that “the chance of disputes amongst neighbours would be reduced almost to vanishing point”. Architecturally, the houses were described as “not unduly ornate, if artistic”, with roughcast to the back and sides of houses and ornamental brickwork around front doors and windows

The new housing at Bents was ready to recieve tenants by 1914. In late 1913 it had been announced that the contract had been awarded for construction of the Polkemmet housing, but that a start on the Bathville houses would be delayed until the following year. Perhaps the outbreak of World War One further delayed plans, and it appears that neither development was ever been realised. Does anyone have further insight into this?

The turmoil and sacrifice of the war led to the demand for homes fit for heroes, and new legislation was introduced to support new housebuilding, and subsequently to promote public housing. West Lothian Housing Society built ten superior three apartment homes at Bents in 1920, but the further extension of Bents during the 1920's seem to have been undertaken directly by United Collieries, with the support of state grants. These homes were to substantial three and four apartment designs.

Among the first residents of the garden city homes in Bents was Annie Kerr, who lived at No.15 Garden City, facing onto the main road. Her husband died in 1921, leaving her with five children to support. Enterprisingly, she constructed a small wooden shed and opened the first shop in Bents.

In 1926, her two oldest children had just begun work at Foulshiels pit when a strike was called that extended across the whole West Lothian coalfield. After six weeks of unemployment, the brothers decided to cross the border in Lanarkshire where they found work at a pit in Newmains.

Annie Kerr received warnings from strike leaders about her sons' conduct, and her shop was boycotted by her neighbours. After receiving threats that “the sooner they cleared out of Bents the better”, her sons gave up their jobs and returned home to protect her. On 31st August 1926, a disorderly mob of eight men, all miners and Garden City residents, massed outside the shop and started throwing stones; smashing windows while the family cowered inside. During the night, the attackers forced entry, ransacked the shop and attempted to set fire to it.

Things had come a long way from the utopian dreams of a garden city. 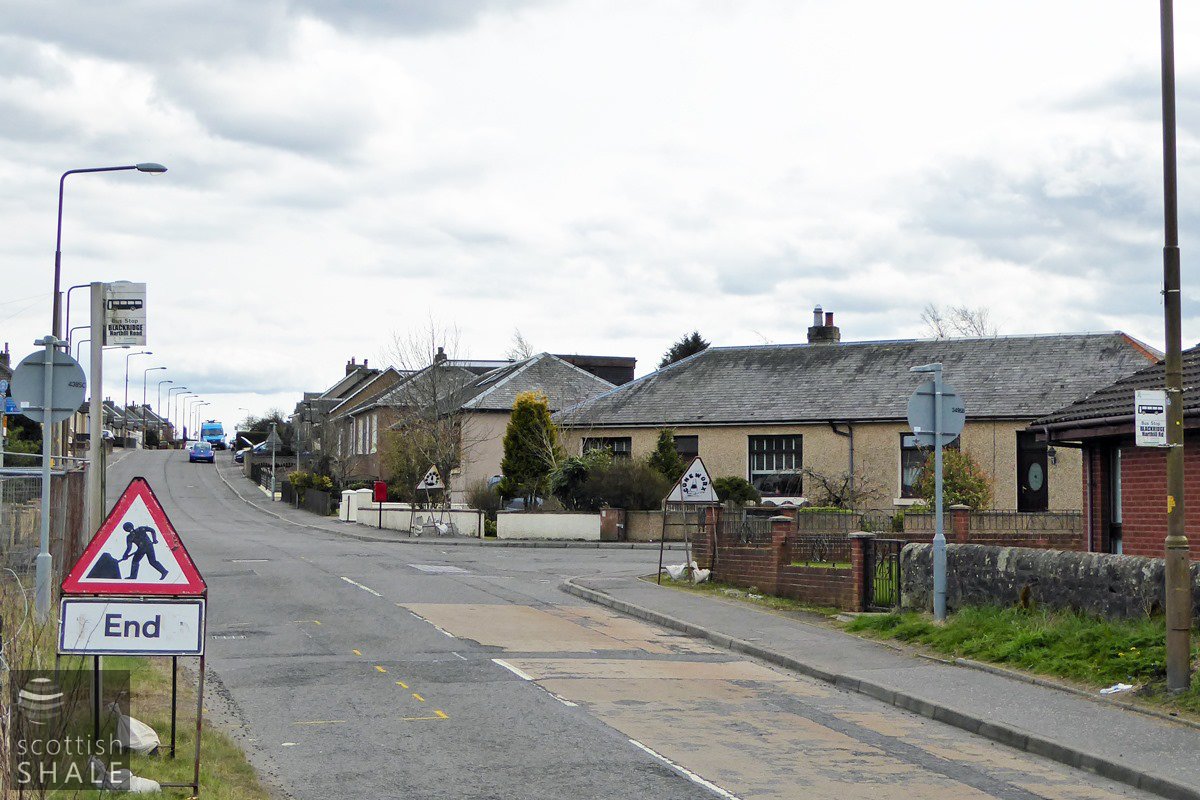 West Craigs (or Westcraigs), photographed in 2016 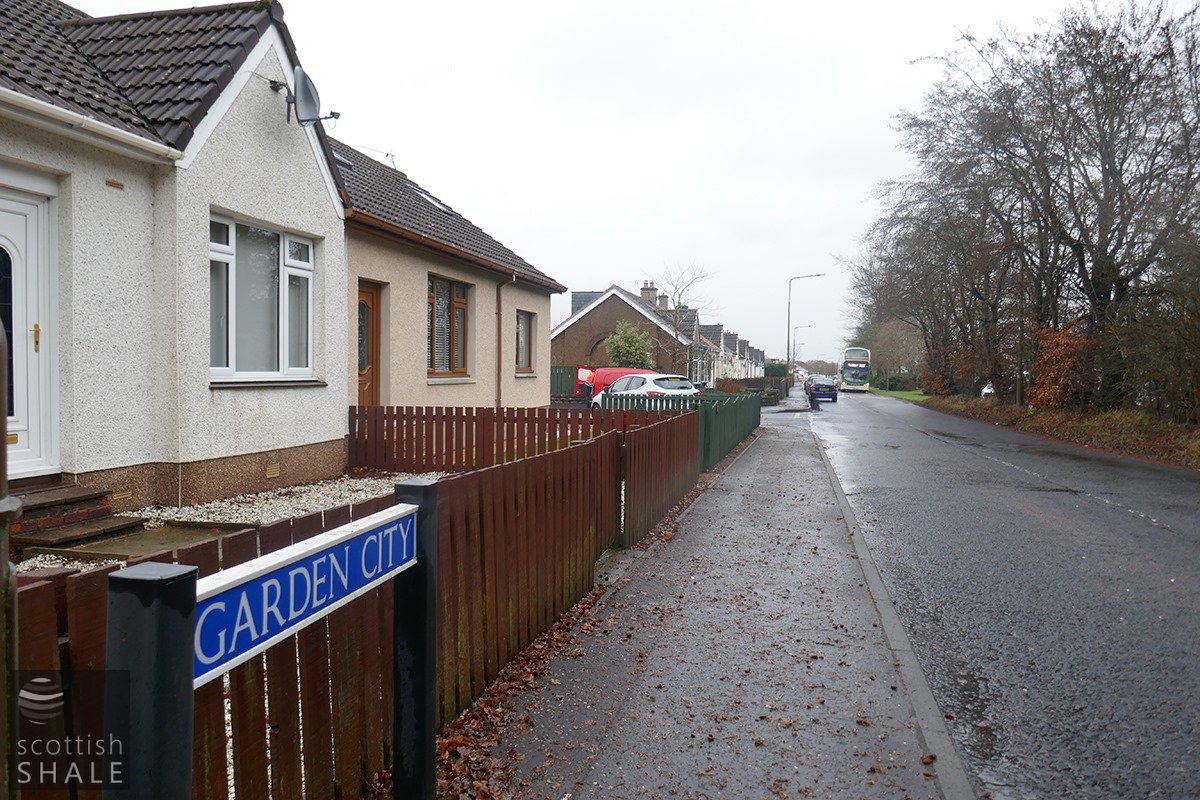 Looking towards Stoneyburn, on a grey December day. 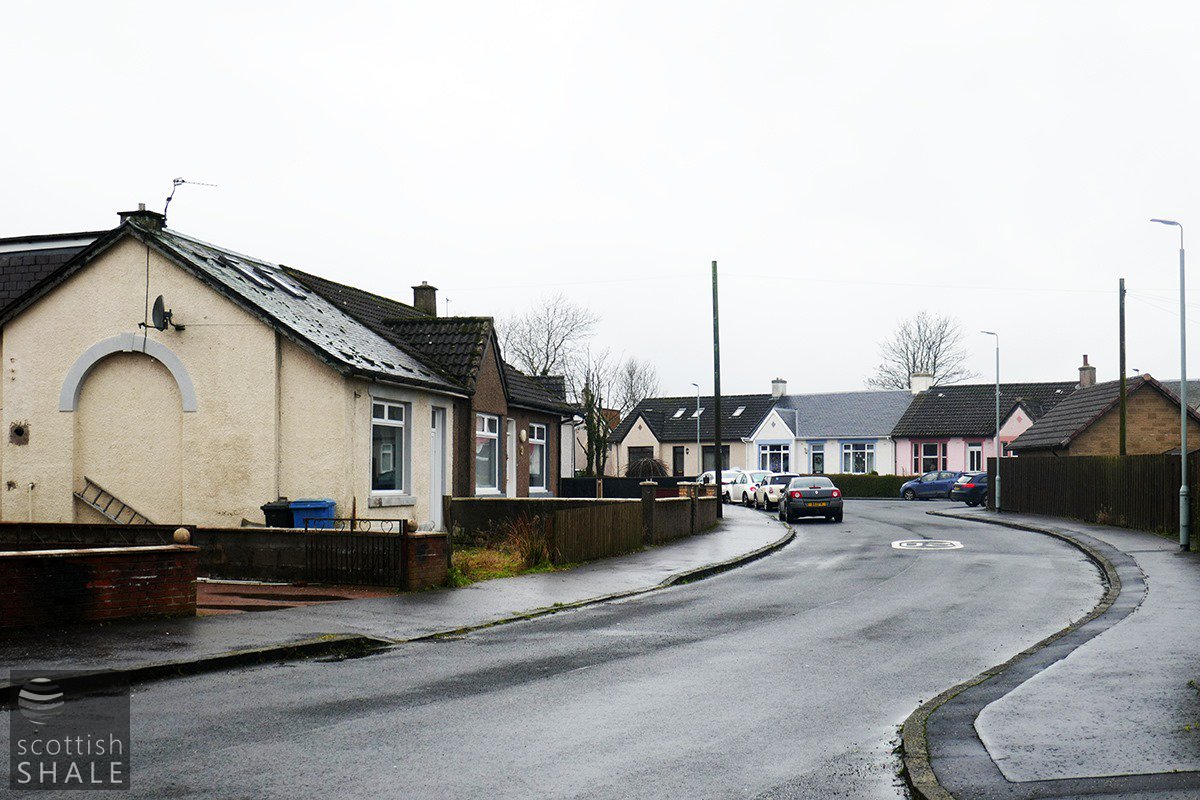 A rainy day in the Garden City, Bents. 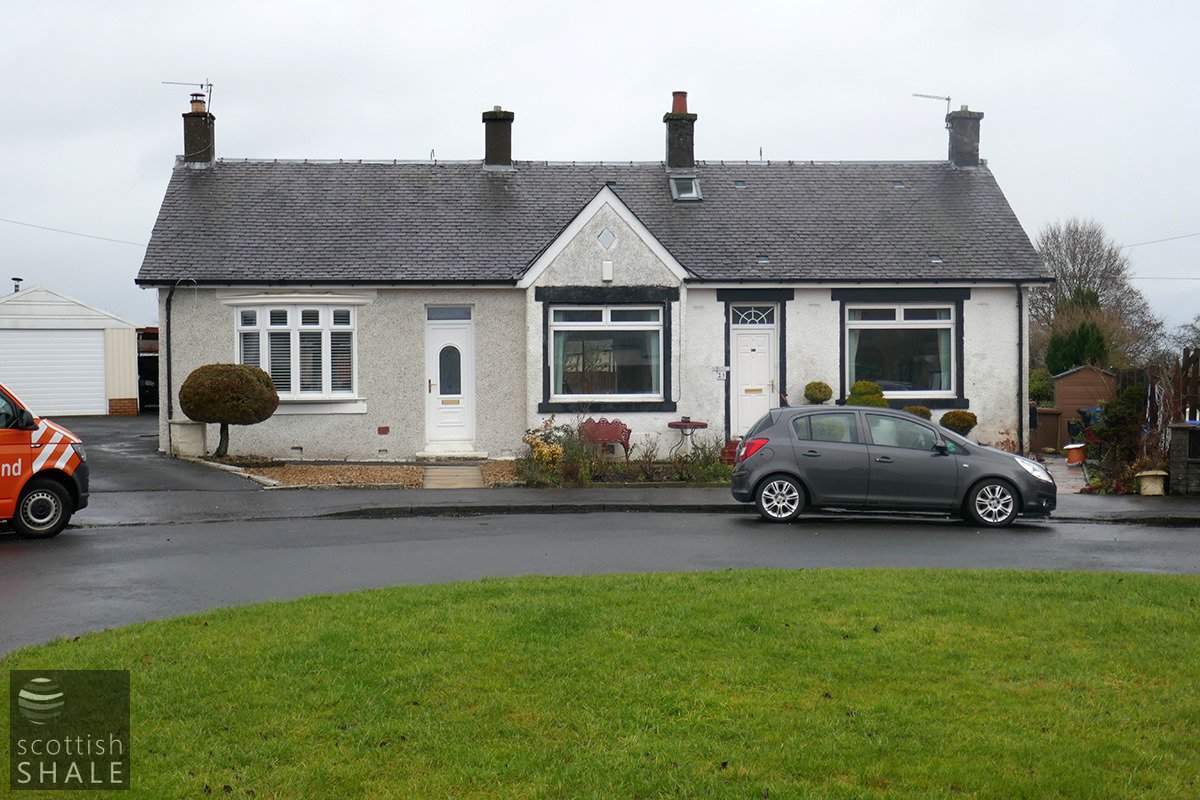 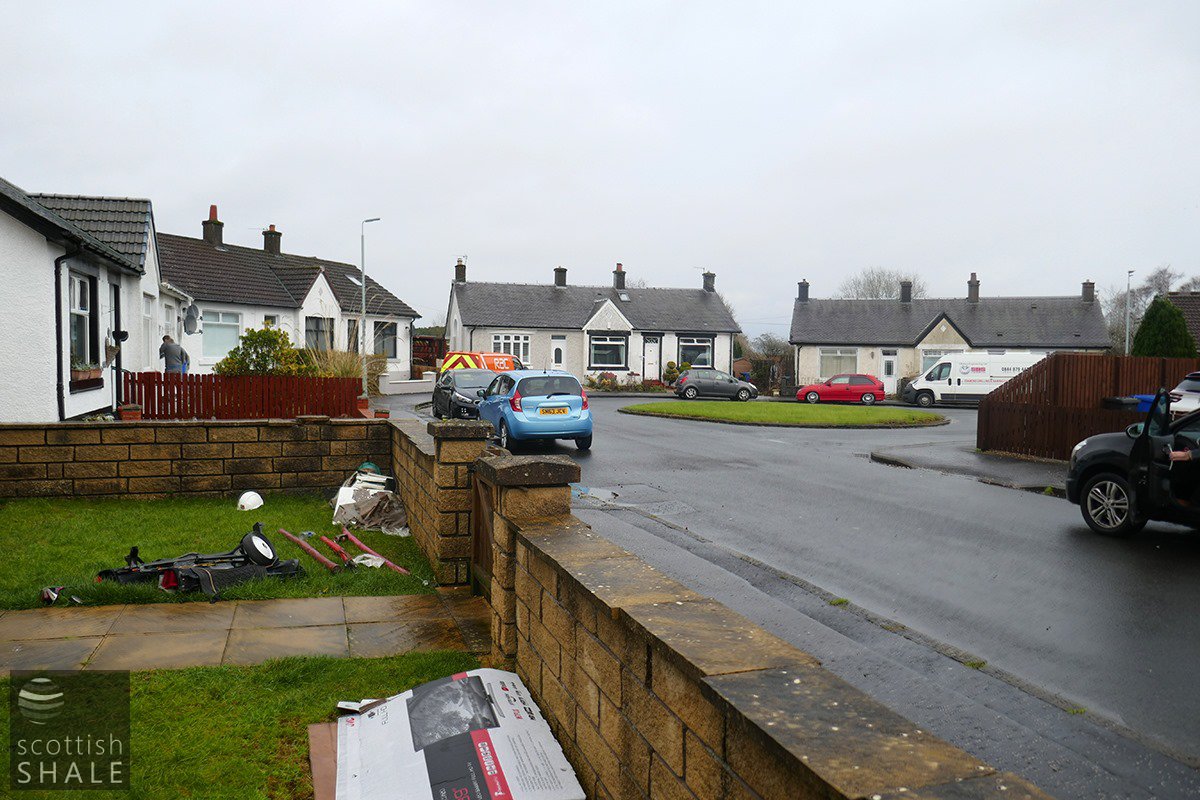 Cottages in a crescent at the Garden City, Bents - which was frequently referred to as "the Bungalows". 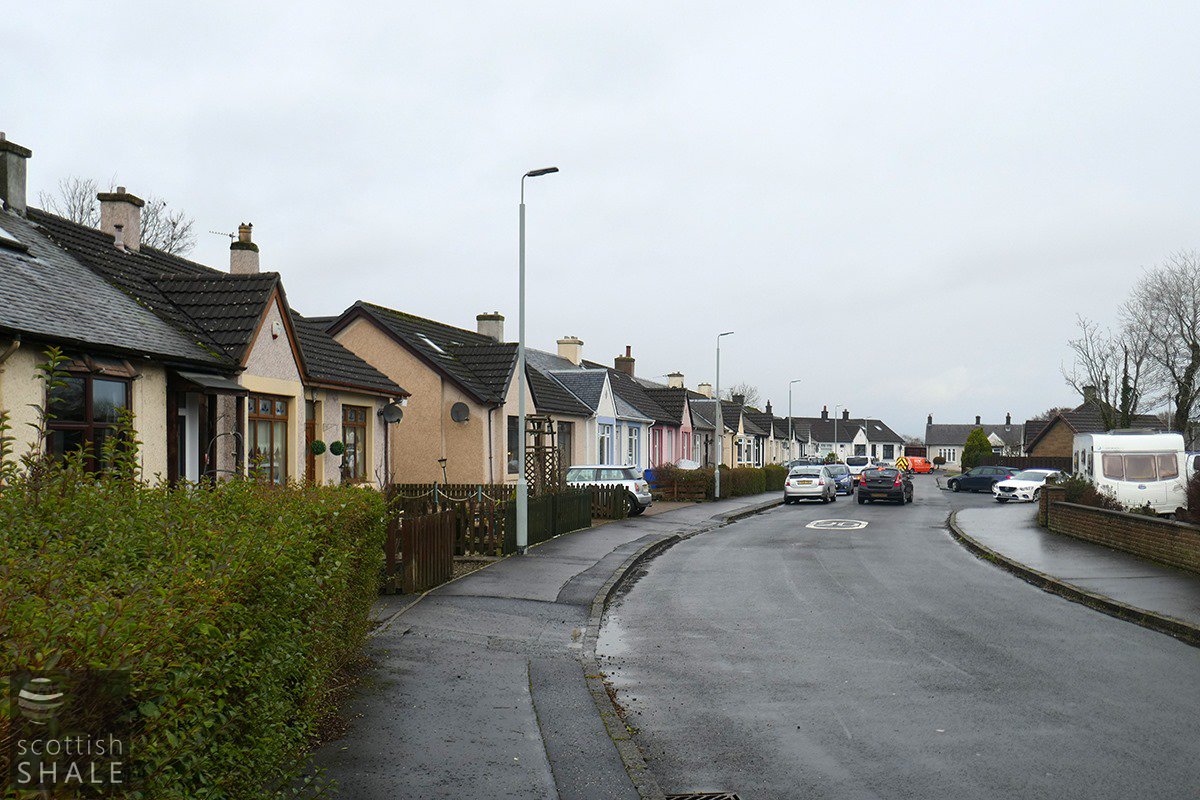 The Garden City, now over a century old, continues to provide solid and desirable homes. 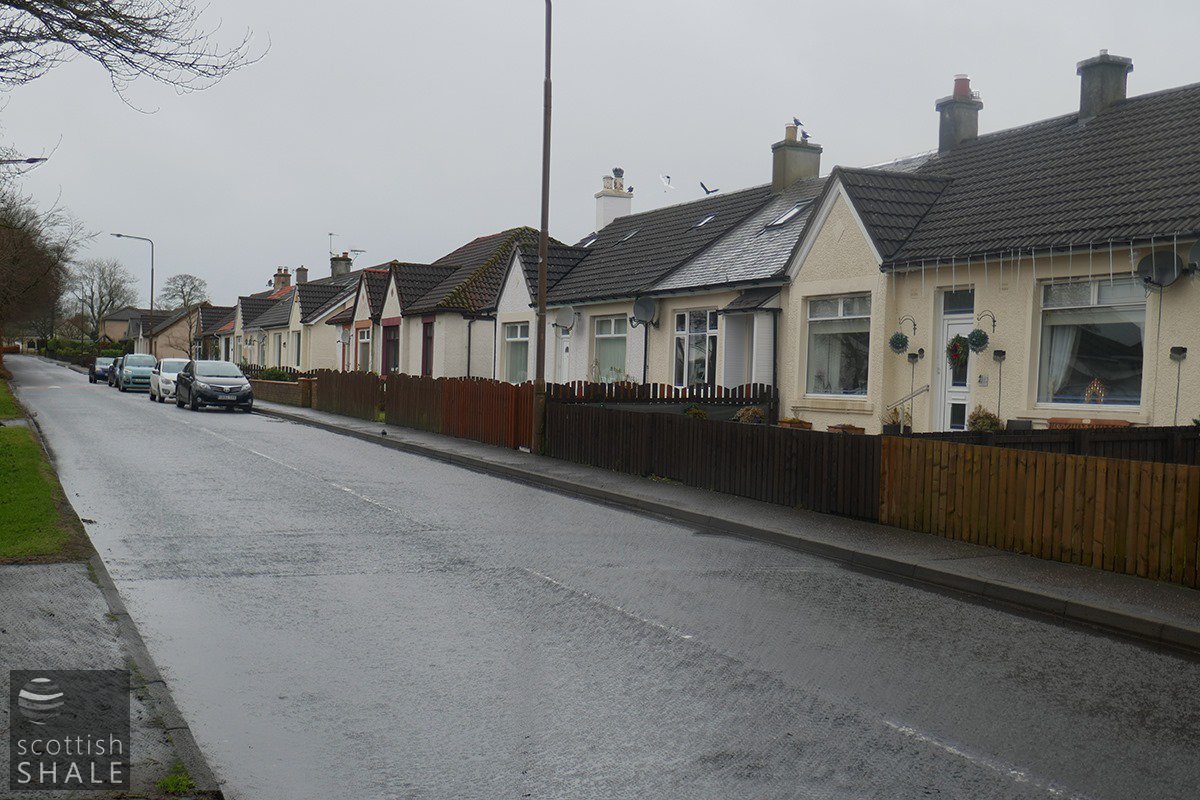 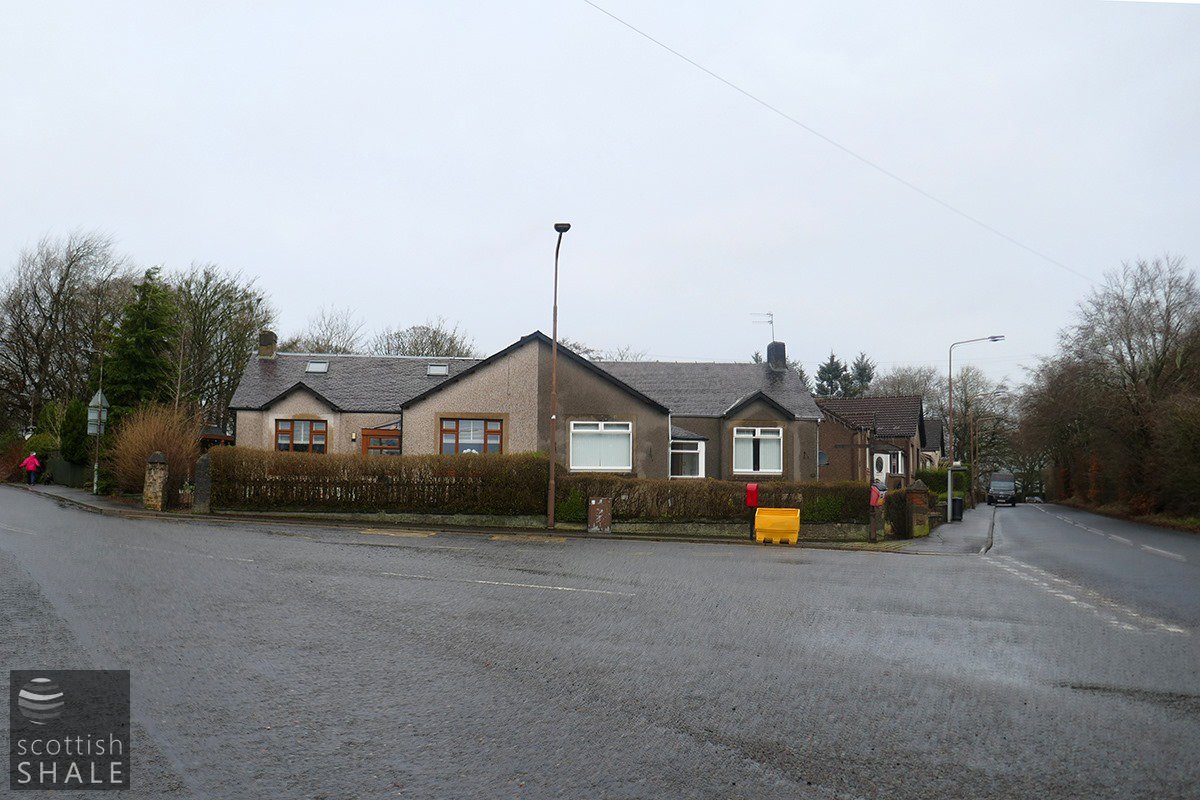