From Roy’s map of the Scottish lowlands surveyed in the early 1750’s, courtesy of National Libraries of Scotland. The bridge over the Almond, (marked by red lines), seems to coincide with the location of Blackburn old bridge.

Forrest’s map of Linlithgowshire, 1818, courtesy of National Library of Scotland, shows the ford across the Almond at Blackburn.

According to one account, the first bridge across the River Almond at Blackburn was built in 1633; a twin arch stone structure carrying a narrow road just eight and half feet wide. William Roy’s Great Map of Scotland, surveyed in the 1750’s, clearly shows a bridge across the Almond at a location that seems to correspond to that of Blackburn “old bridge”, which now carries Riddochhill Road.

Roy’s map was commissioned in the aftermath of the Jacobite Rising and provides a unique picture of the area before the age of agricultural improvements and turnpike roads. Many familiar routes and landmarks are absent from the map, and farmland is still laid out in unenclosed strips. The settlement of Blackburn is shown a mile east of its current location, not far from Seafield farm. Within a few years of the map’s publication, the old village of Blackburn was cleared to make way for construction of Blackburn house, and the “Newtown of Blackburn” was established on its present site. 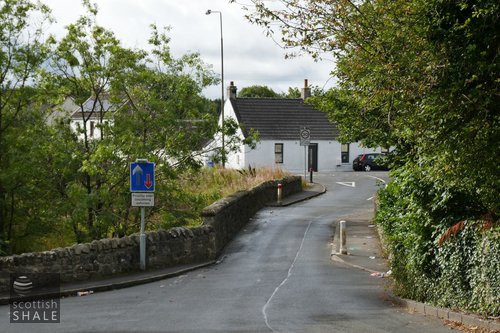 In 1764, a turnpike trust was formed to establish a toll road from Edinburgh to Glasgow via Shotts. Between Livingston and Whitburn, the new turnpike seems to have followed the route of the existing road, and retained the old bridge across the Almond at Blackburn. Perhaps it was at this time that the old single track structure was widened to carry two carriageways; the original twin arches being retained but extended on their western side. Even with this widening, the old bridge lay at right angles to the natural flow of traffic and must have created considerable congestion. From early days there seems to have been a direct route that avoided the bridge by fording the river, creating the characteristic triangle of roads that still exist today. At times when the water was low, it might have been quicker and easier for stage coaches to splash through the river rather than divert across the bridge

A small settlement, including a post office and an inn, grew up around the southern side of the old Blackburn bridge, from where traffic could also strike south towards West Calder and Lanark by way of Little Blackburn.

With considerable traffic passing along the turnpike road, local landowners were keen to attract industry and commerce to the area. An advertisement of 1779 describes land adjoining the bridge as “a proper place for a distillery”, commenting that the area was “good barley country, where there is a certainty for a great consumption of spirits”. While Blackburn never never became renowned for its whisky production, the plot beside the bridge was developed in 1793 as site of the substantial Blackburn cotton mill, which remained a major employer in the area for the next 80 years 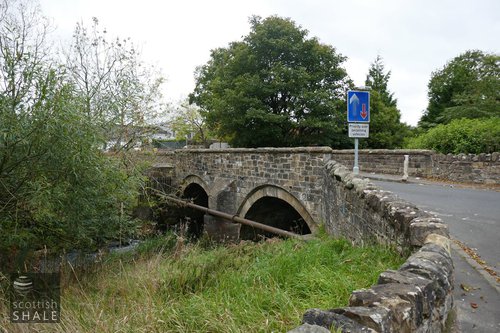 In 1818, the turnpike trustees built a fine single arch bridge in place of the ford, establishing a direct route for their toll road, now West Main Street (A705). This by-passed the old bridge, which was then effectively abandoned by turnpike trust. Following 1877, when a major fire led to the closure of the Blackburn cotton mill, the old bridge served little useful purpose, and by the 1890’s it was in a dangerous condition. The future of the old bridge was the subject of Council debate for a number of years. Many of the parapet walls of the bridge had collapsed and fallen into the river, and their were concerns over public safety, however the bridge and the Mill Road leading to it, had never been included in the list of public highways and no one would admit responsibility for their upkeep. It was eventually established that the lands were owned by the Council, but there remained great resistance to spending public funds on a structure described as being “of no earthly use” and saving a journey of “only twenty yards of so” for those in a dozen houses, a farm and a public drying green served from Mill road.

Once a survey revealed that the bridge had good foundations and was structurally sound, the Council grudgingly agreed to adopt bridge and set about repairs and improvements. These included raising the road on either side to provide a level approach.

Today the old bridge sees considerable traffic, providing an important link into the Riddochhill estate, and a sneaky by-pass for through traffic at times when there is congestion at Blackburn cross. While the structure appears to have been substantially rebuilt in Victorian times it lies on foundations that probably date back almost 400 years. To the south of the bridge, a cluster of houses survive from the days of the turnpike road, but go largely unnoticed behind smart modern facades.

Above left: View across the old bridge, looking south.

Above right: The twin arches of the old bridge, looking from the north side. 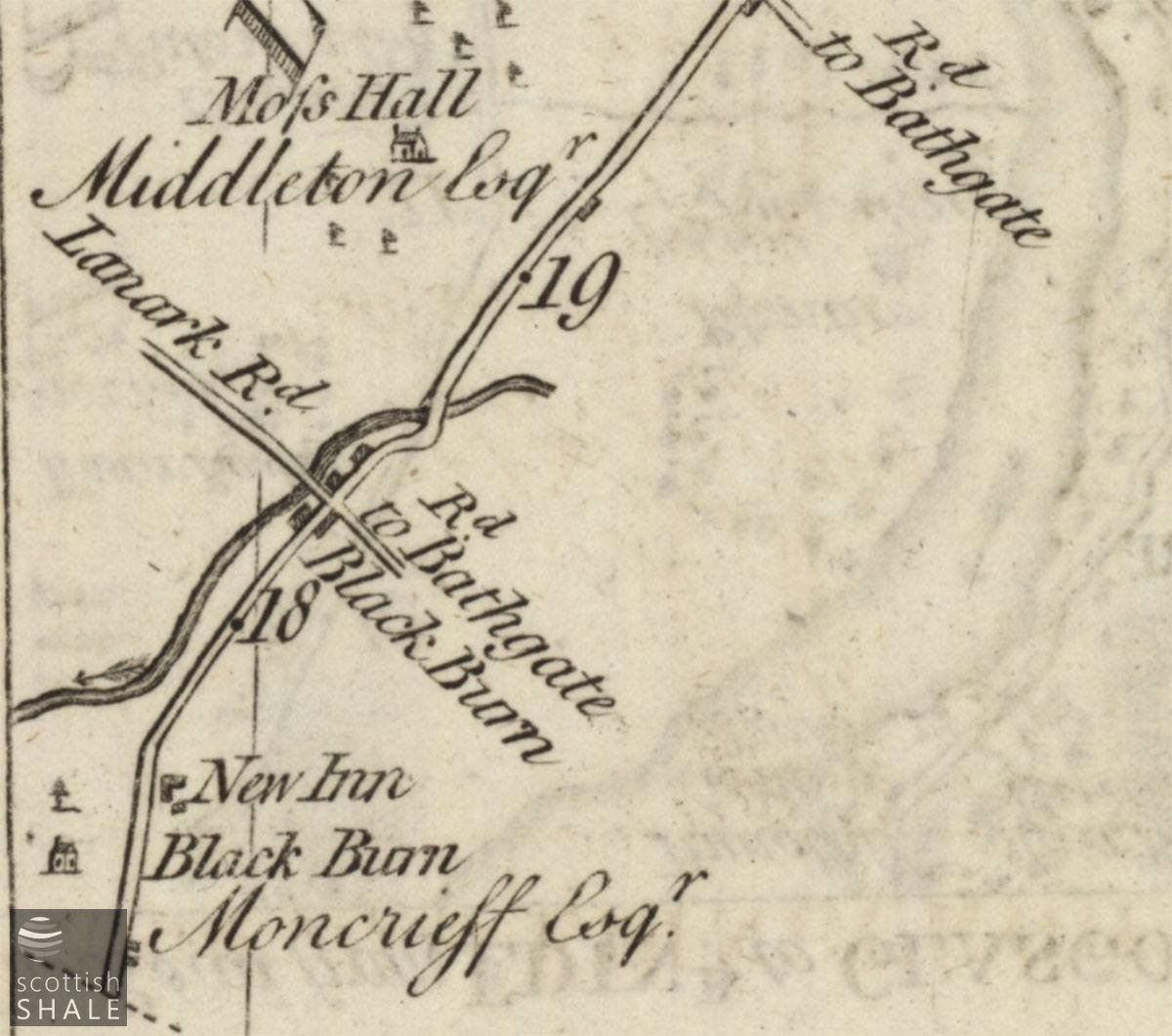 The road from Edinburgh, continued to Ayr by Hamilton, From Taylor and Skinner’s survey of 1776, courtesy of National Library of Scotland. Clearly showing the kink in the turnpike road at Blackburn old bridge. 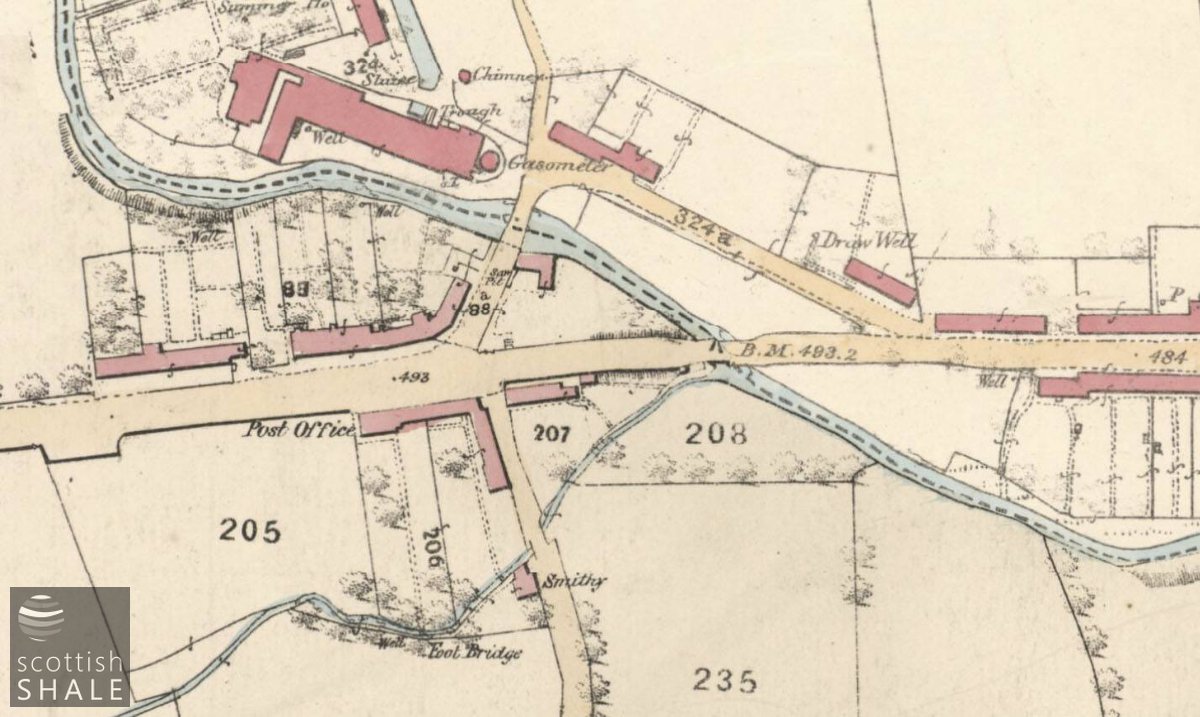 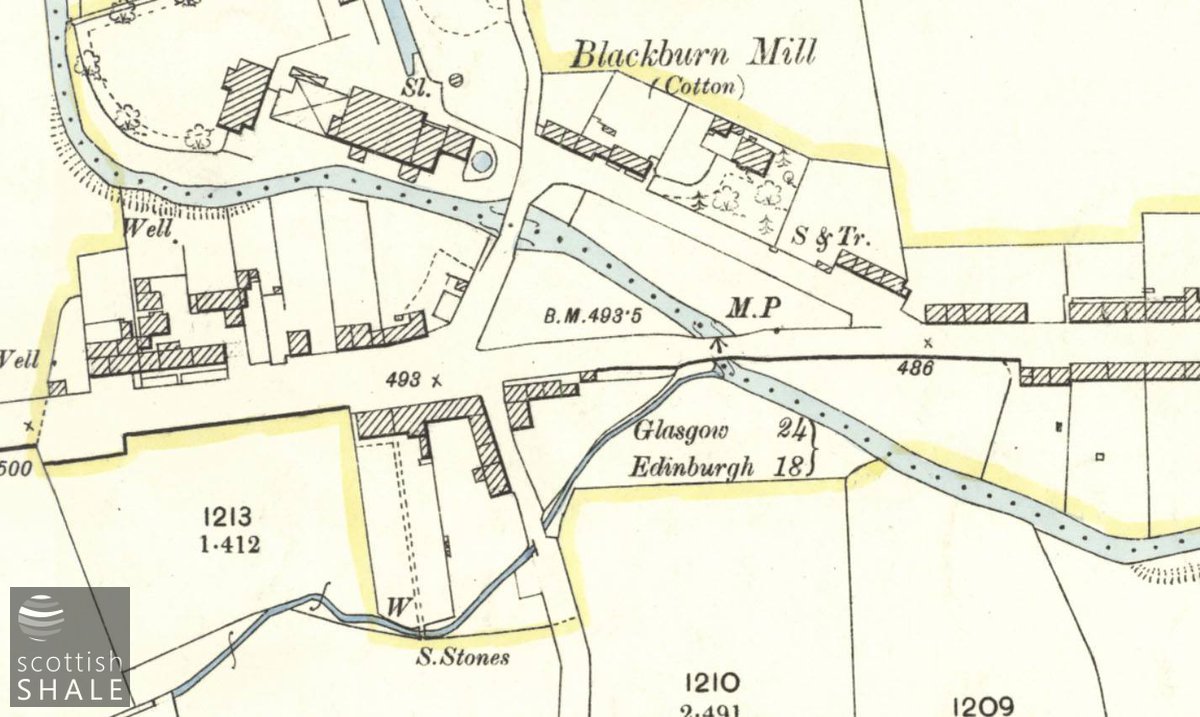 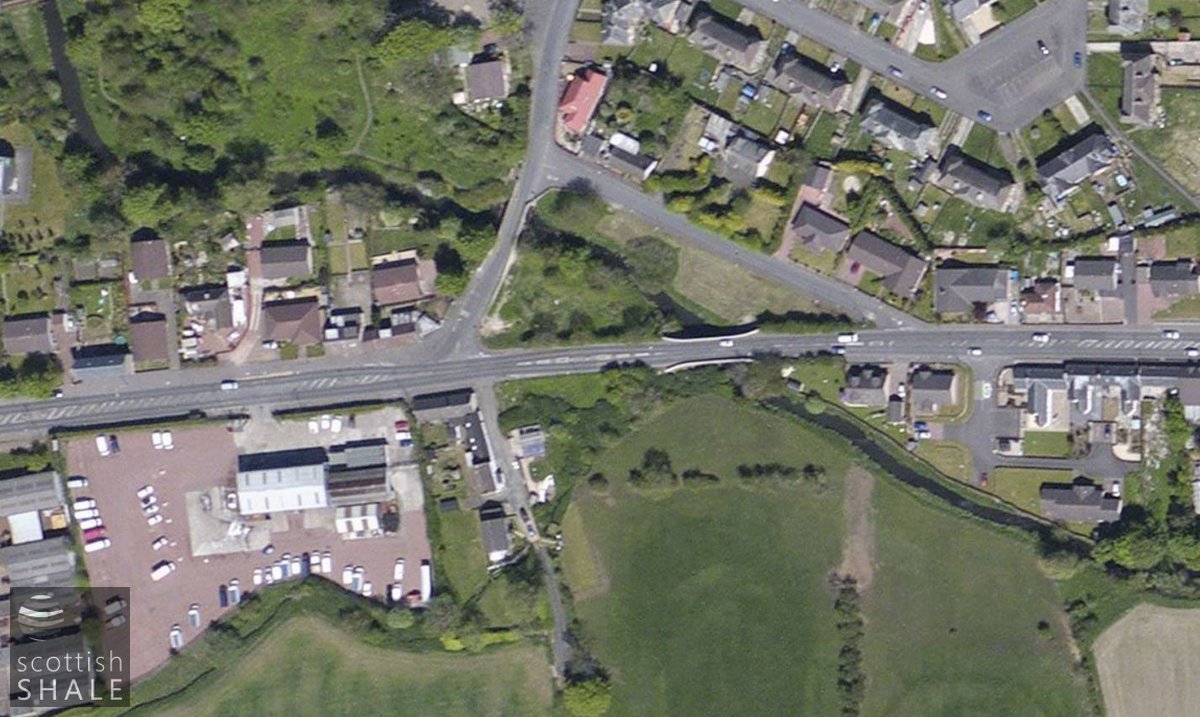 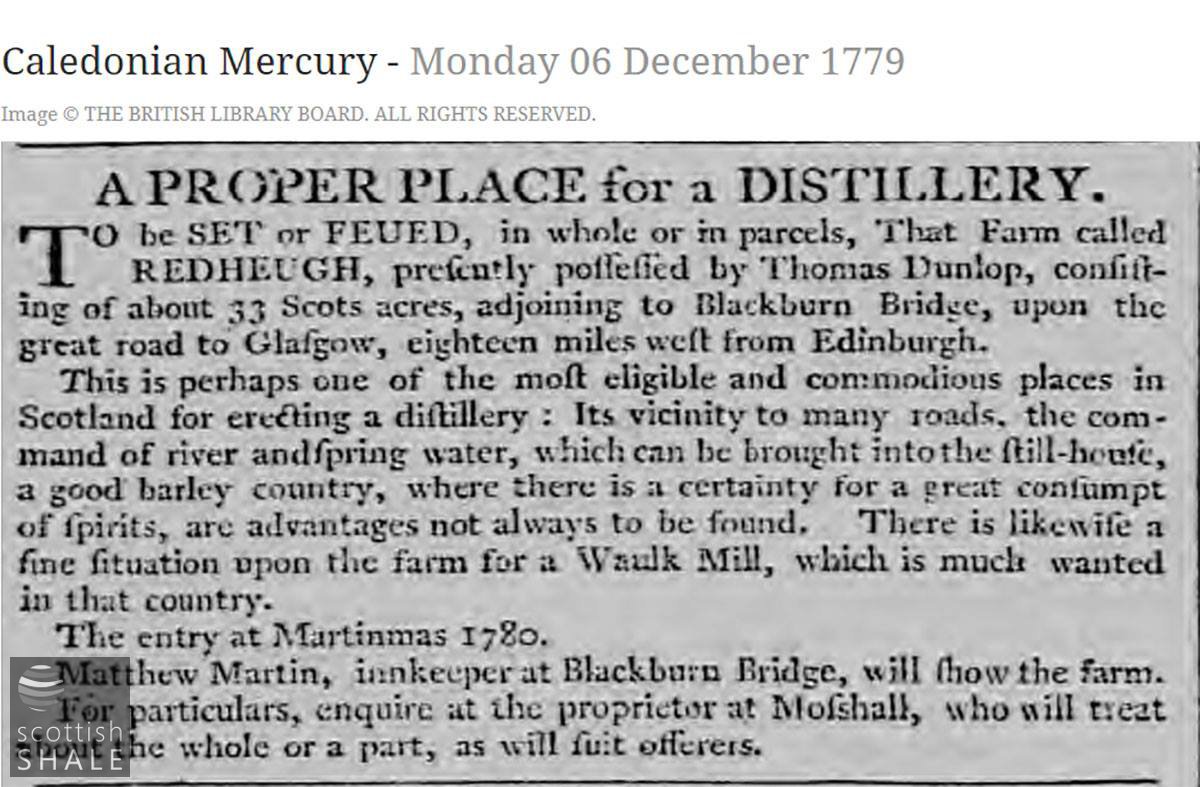 Blackburn, “where there is a certainty for a great consumption of spirits”. 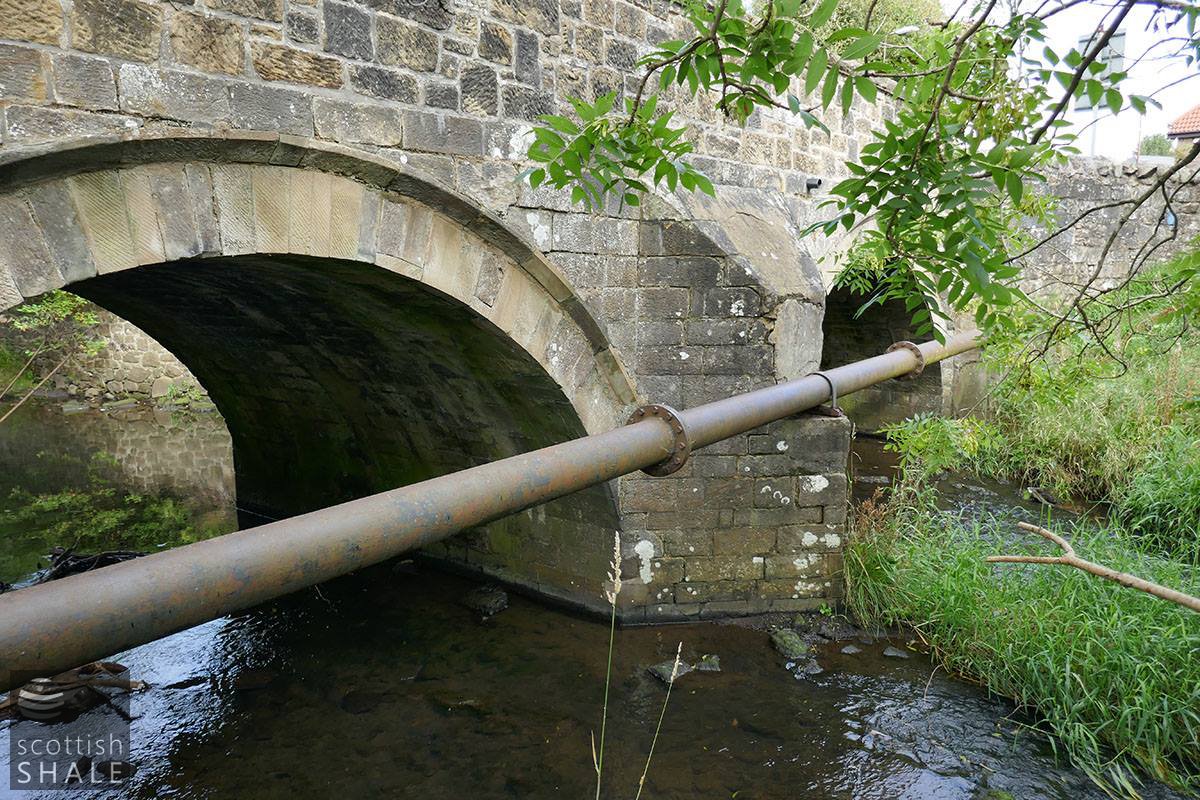 The twin arches of the old bridge, looking from the south side – with chunky cast iron pipe. 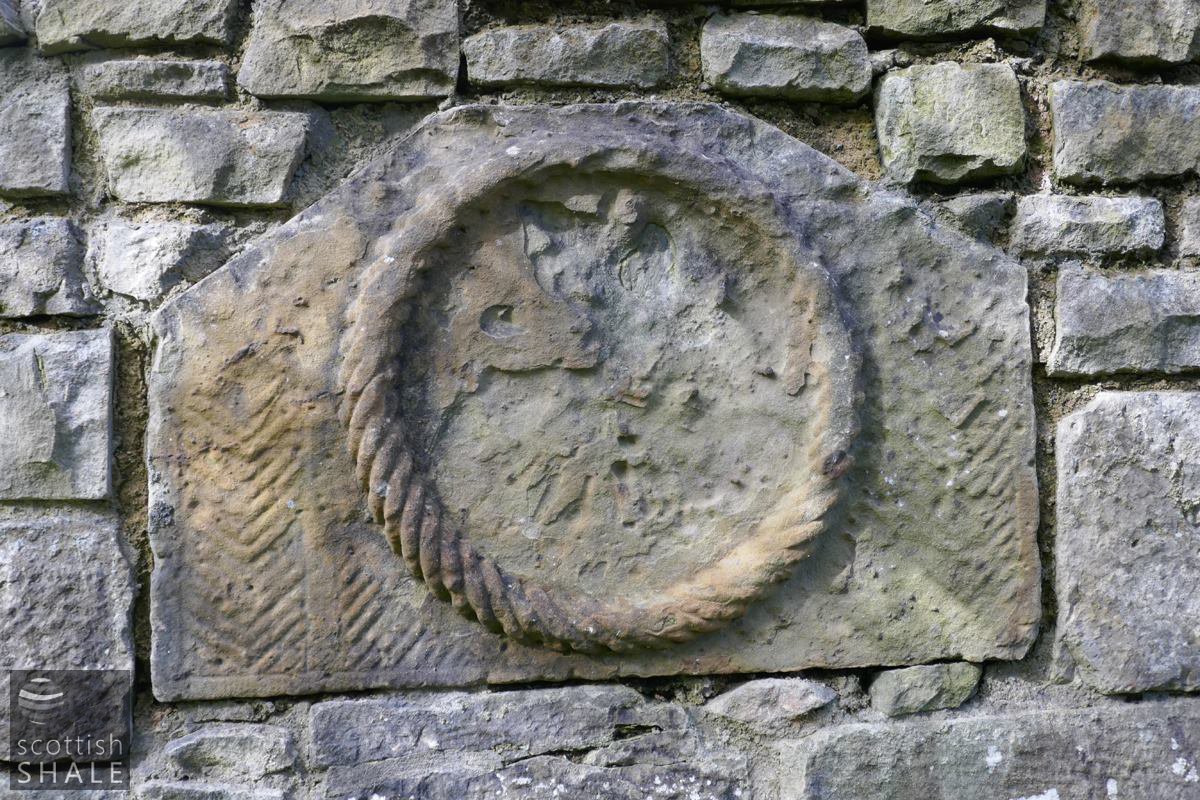 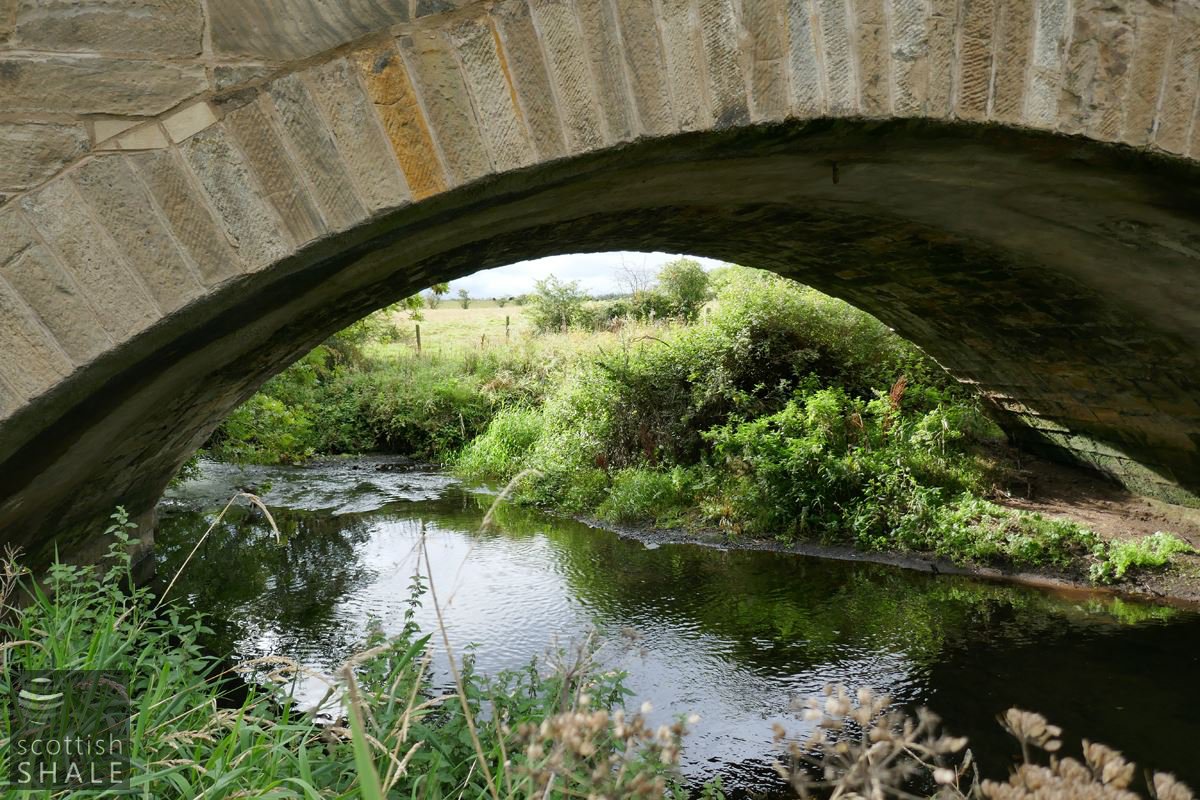 A glimpse beneath the 1822 turnpike road. 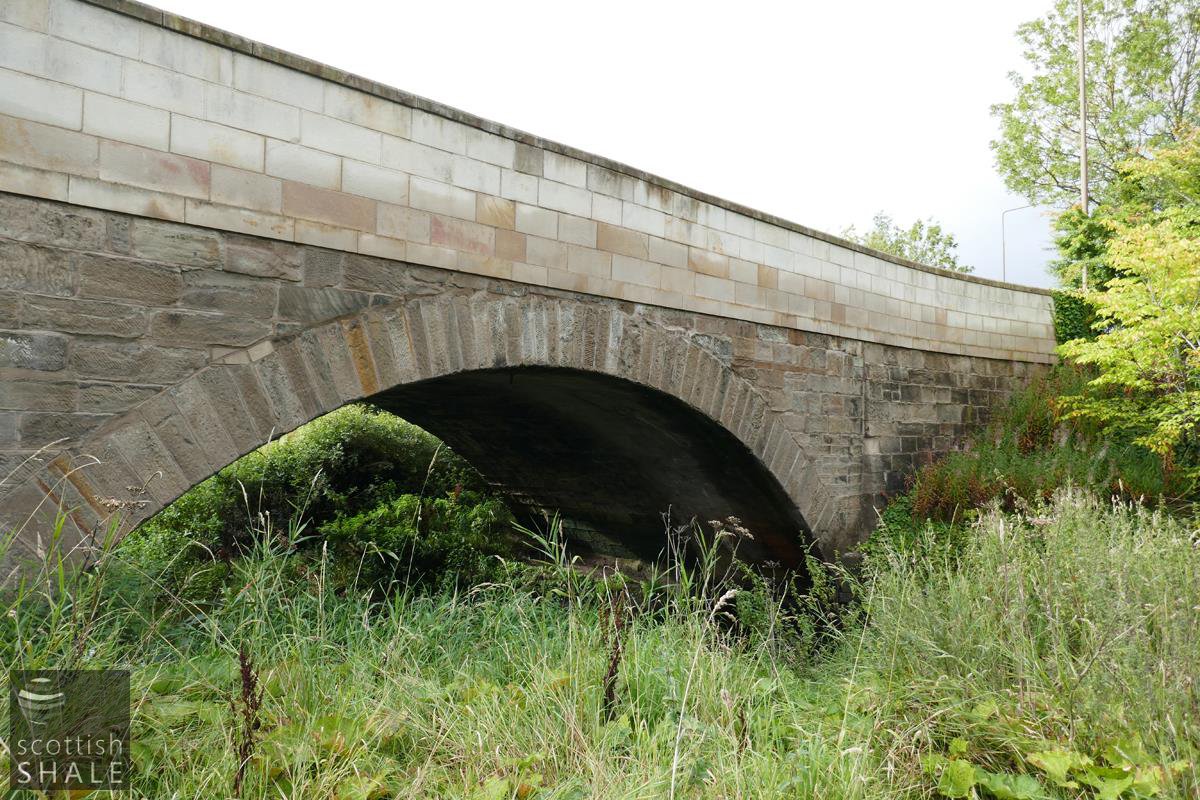 The 1822 turnpike road bridge- viewed from the north. 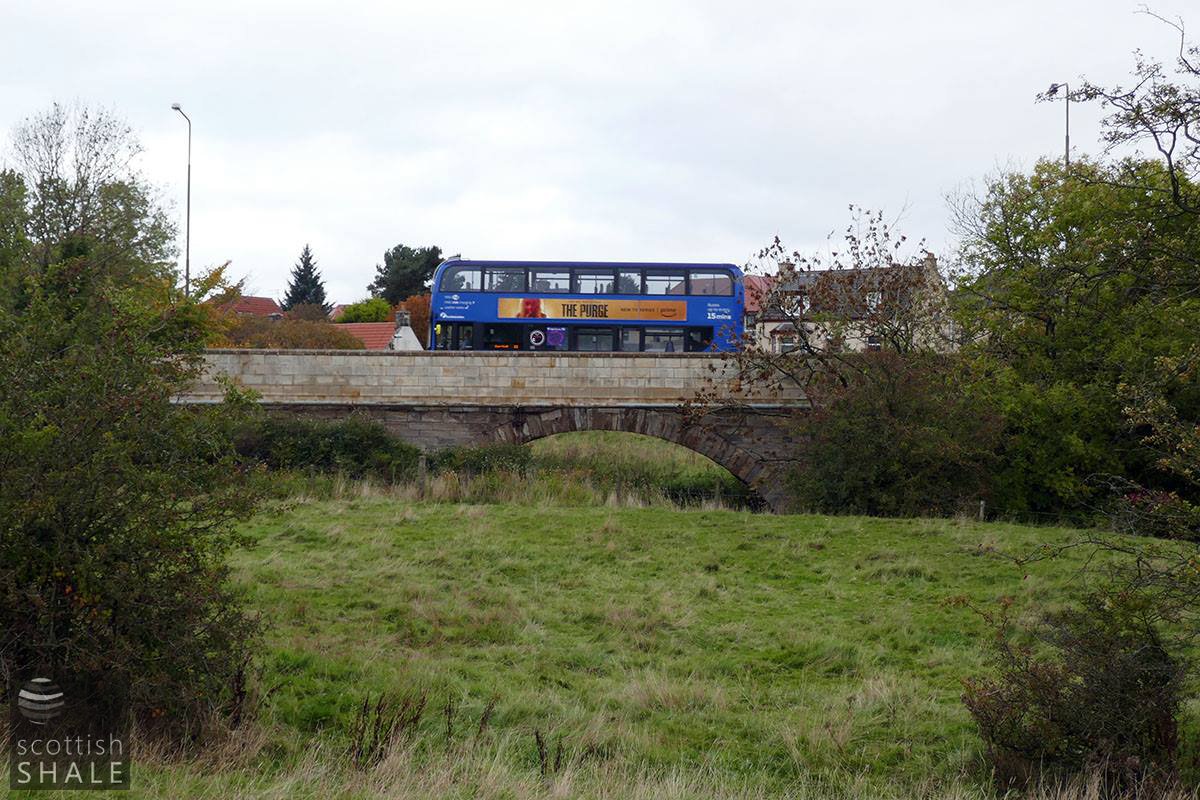 The 1822 turnpike road bridge- viewed from the south. 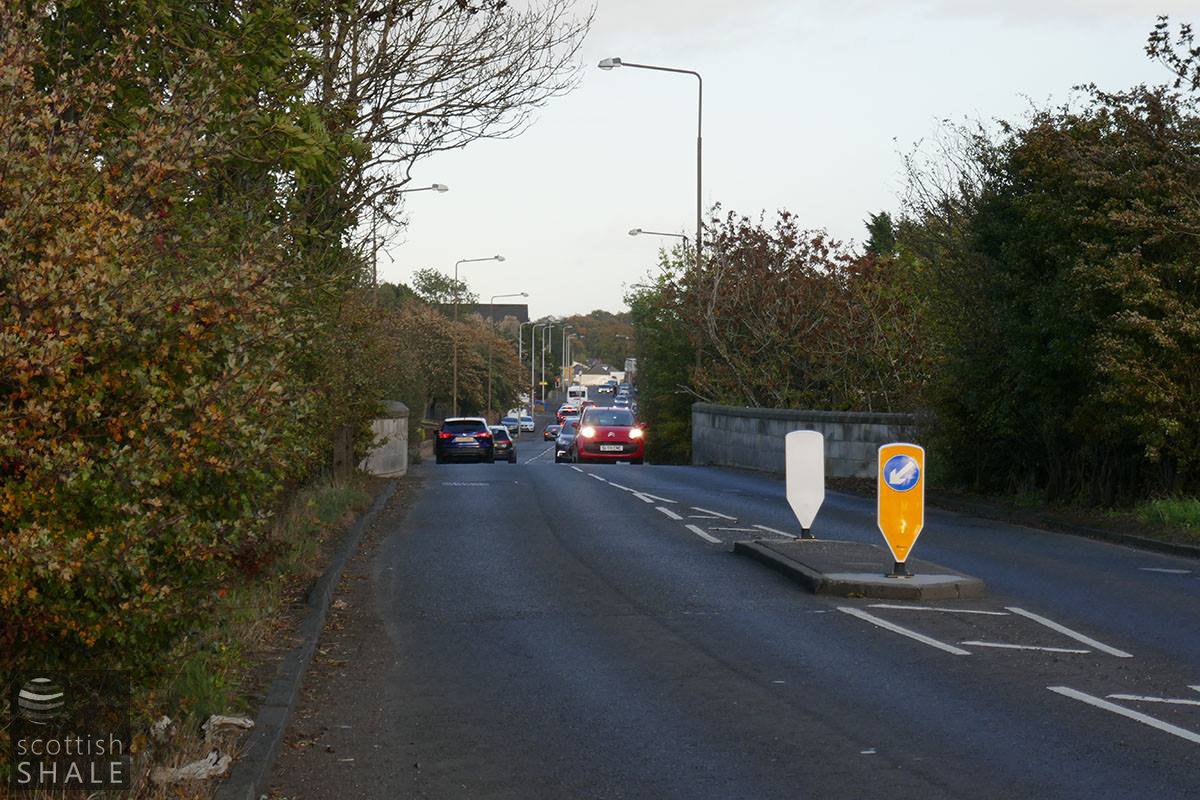 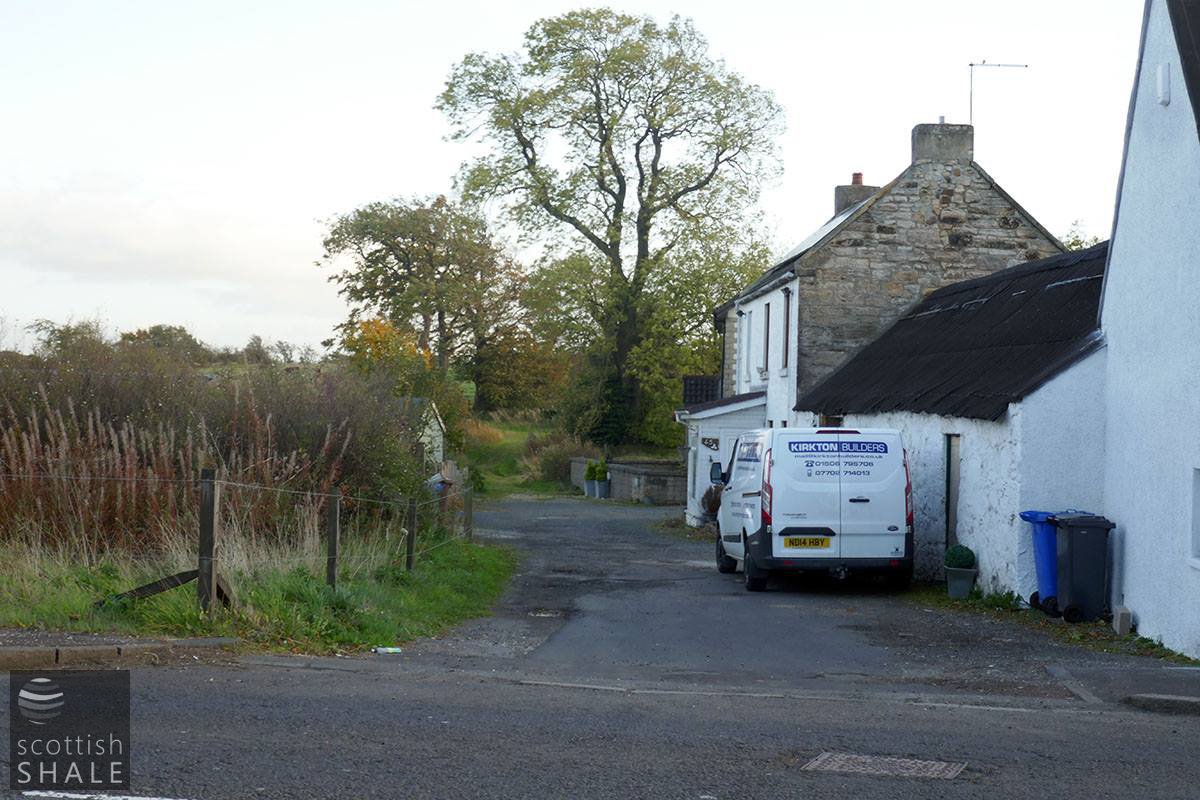 The main road to West Calder, until construction of a bridge across the Almond near Blackburn cross early in the 19th century. 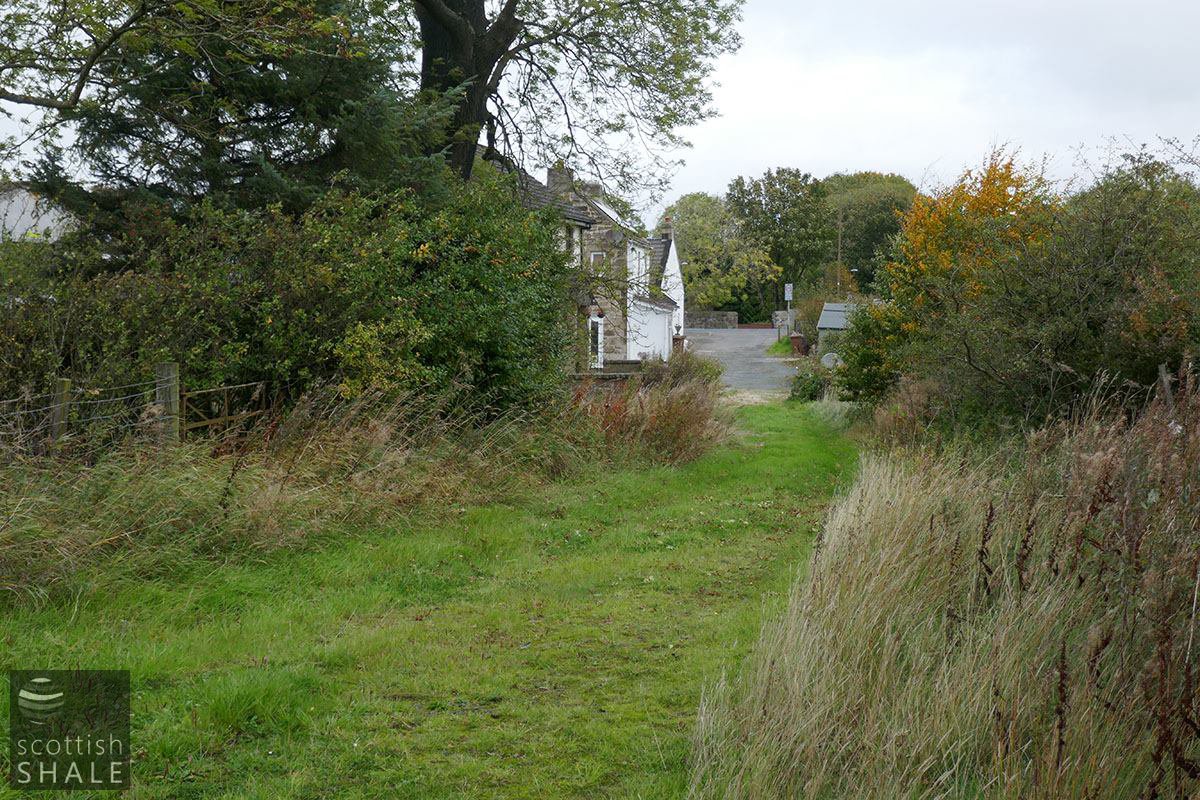