The railway station at Bangour 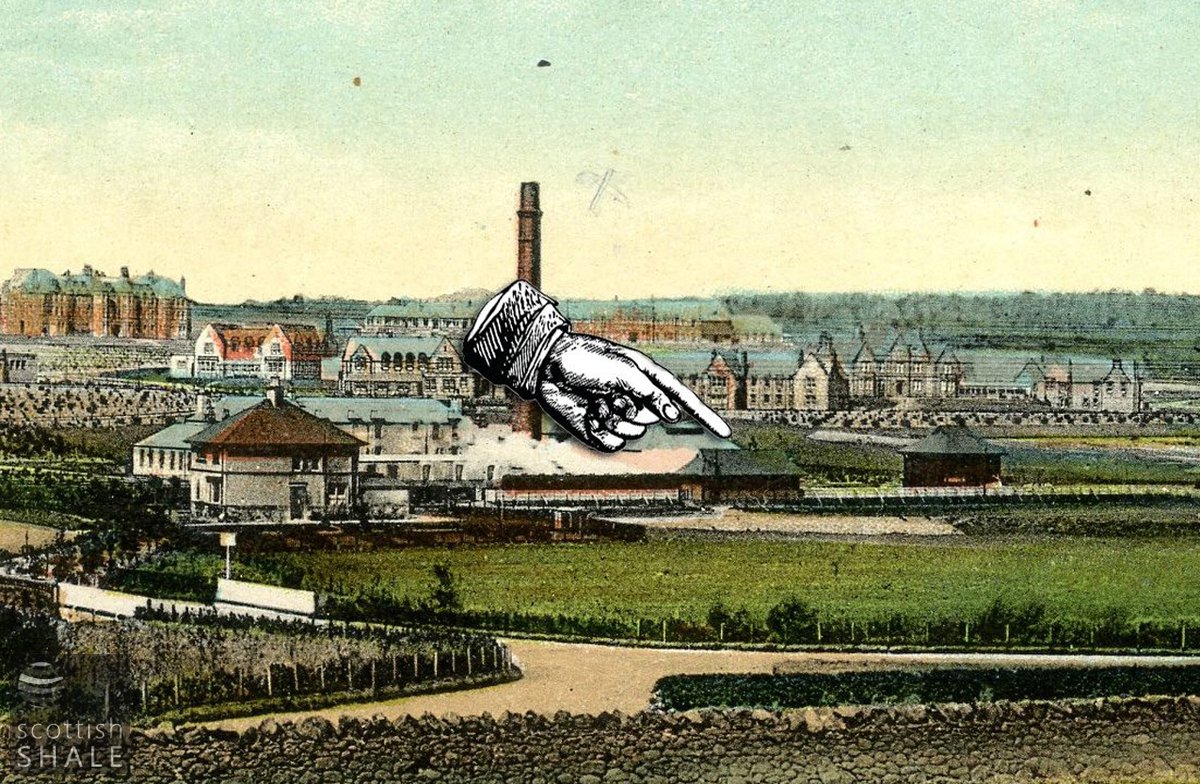 The finger points to the station building - from a rather blurry postcard. 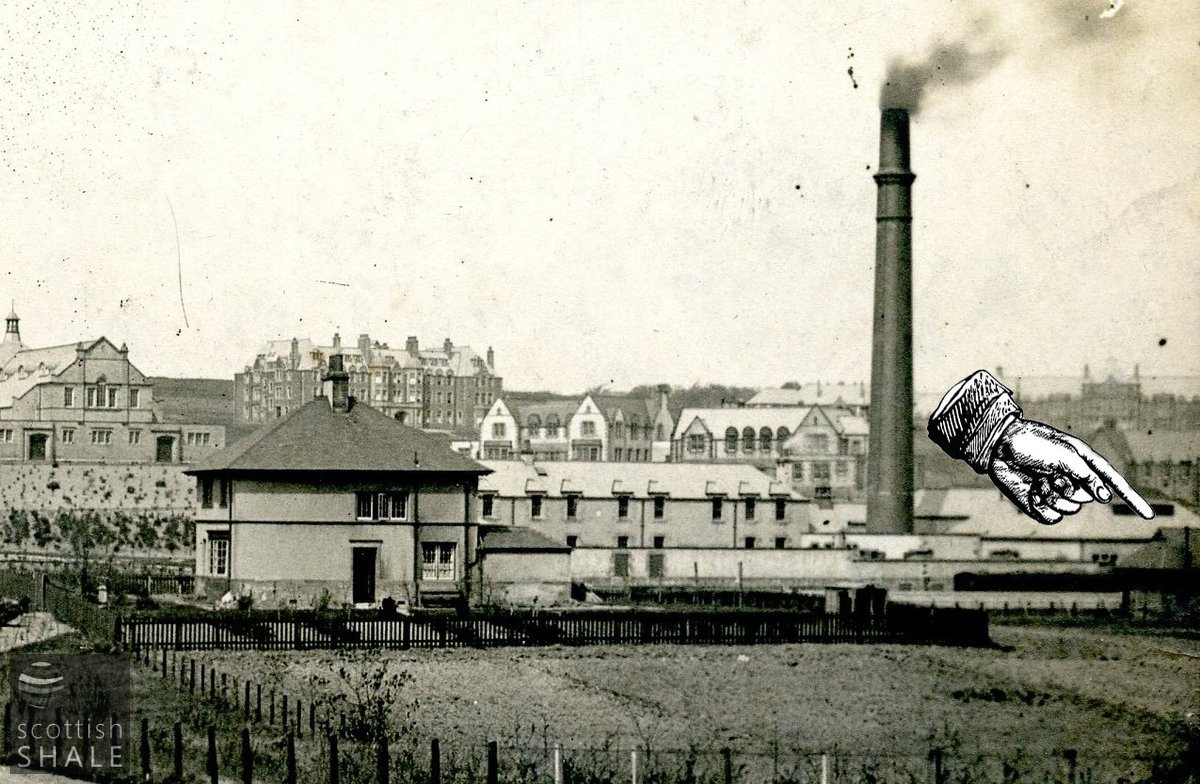 The gablet of the railway station can just be seen at the edge of this Robert Braid postcard, with the wonderful smoking chimney of the power station in the background.

The former sports pavilion may not be one the most impressive or significant of the many threatened buildings on the former Bangour hospital site – but has a fascinating history, having once been the terminus station of the hospital's private railway.

In 1896 the Edinburgh District Lunacy Board was created to provide better treatment for the capital city's troubled souls. The energetic committee studied the latest European ideas in village-plan psychiatric hospitals, purchased the West Bangour estate, and commissioned leading Scottish architect Hippolyte J. Blanc to design an extensive village of villas as home for up a thousand patients.

The first step in this ambitious project was the construction of a railway, two and a quarter miles long, to transport construction materials to the site. This was built to passenger-carrying standards; the board considering that “the cost of railway would be offset by fares of friends of lunatic paupers visiting the asylum”. The line was completed for freight traffic in about 1901, enabling work to begin on construction of the hospital buildings. As costs of the project mounted, the board faced increasing criticism, and there were calls to abandon the whole project as “a scandalous waste of money”. As a consequence, the design of many buildings were greatly simplified – for example it was noted that “in lavatories, marble partitions and gunmetal fittings are not necessary”.

Work, however, proceeded on a modest station building at Bangour, described as “a very prettily designed little structure, with every accommodation for the convenience of the public”, and also an intermediate station at Dechmont. Both were complete by 1905, ready for formal opening of the hospital the following year. Trains were worked by the North British Railway, who were paid an annual sum by the board.

Above right: 25" OS map c.1916, courtesy National Library of Scotland. The station building (close to the wording "Terminus"), seems uncomfortably close to the edge of the platform? 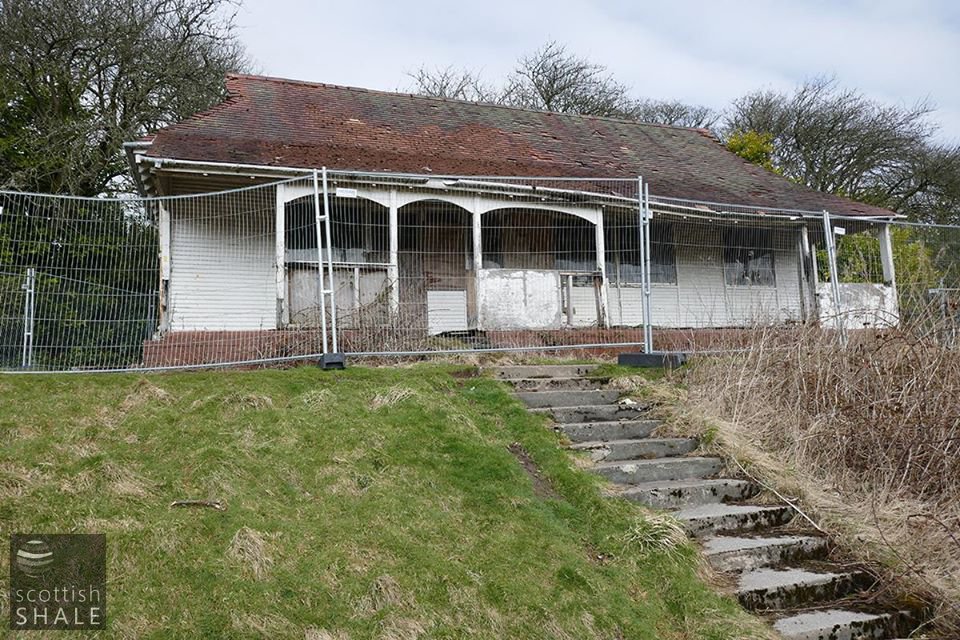 The pavilion, with canopy in danger of collapse where pillars have been removed. 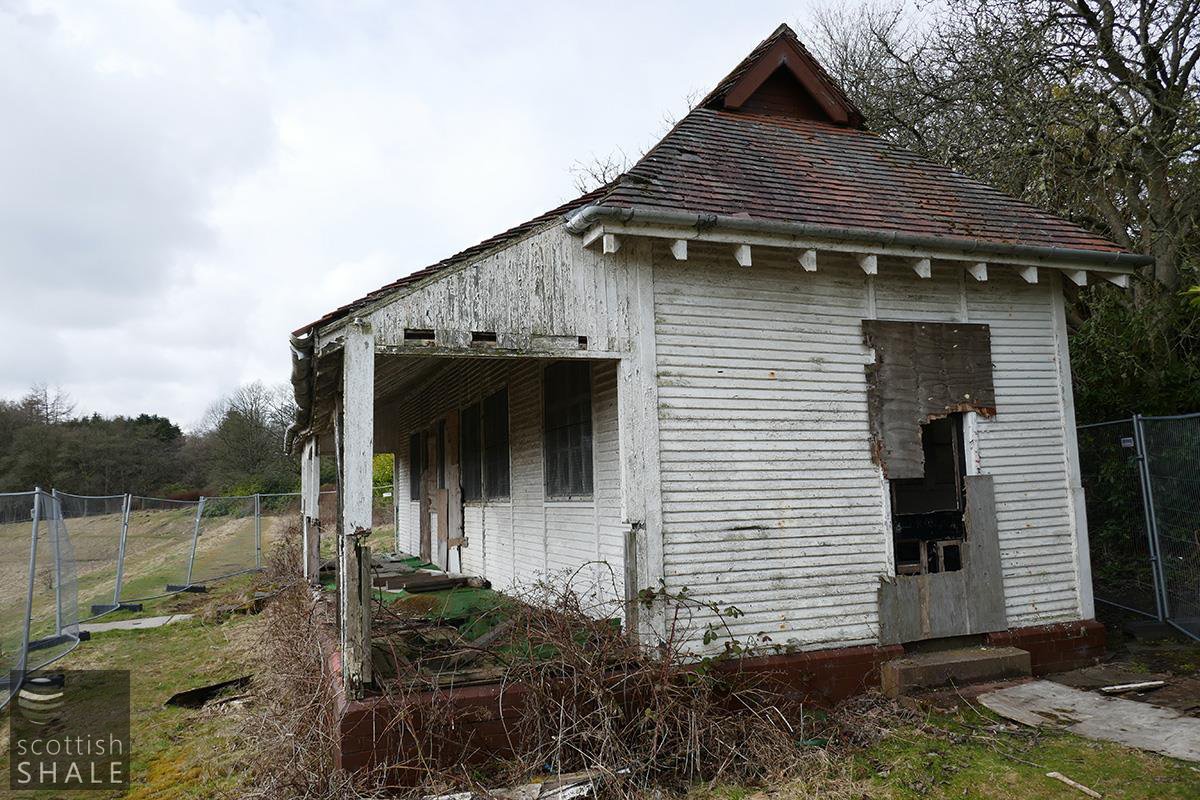 The gablet of the railway station can just be seen at the edge of this Robert Braid postcard, with the wonderful smoking chimney of the power station in the background. 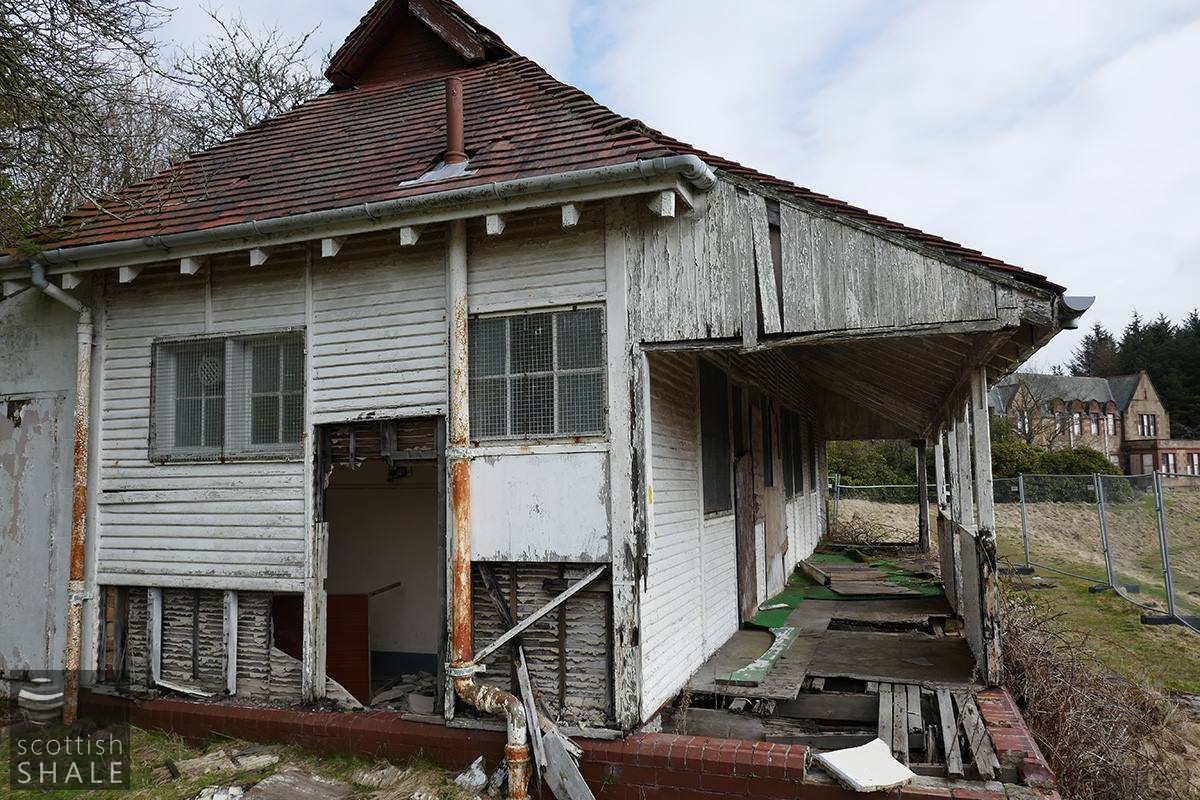 The pavilion from the west.

In 1915, Bangour was designated a war hospital, and the private railway was kept busy with a constant stream of the walking wounded and stretcher cases conveyed on specially adapted ambulance trains. The platform was altered, and a covered shed built to assist the unloading of the wounded. After the war, motor traffic soon proved more economical than rail, and the branch line was closed in 1921, with the track material put up for sale in 1924.

Some time after that, the Bangour station building was dismantled, and its components used to build a sports pavilion in the hospital grounds, about a half mile from its original site. No doubt many adventures and happy memories were played out there.

The pavilion is an unusual-looking structure with a steep pitched roof and retaining the distinctive gablets at either end that are seen in old photographs of the station. The building is vaguely reminiscent of the “swiss cottage” style stations built on the West Highland Railway that were designed by James Miller, a former pupil of of H.J. Blanc.

Bangour hospital finally closed in 2004, and since has slowly decayed while waiting a grand scheme to redevelop the site in a way that respects and preserves much of the original architecture. Efforts are being made to keep the site tidy and to stay one step ahead of the neds and vandals. Welcoming dog walkers and joggers during daylight hours seems to help in this respect. The pavilion is not listed, but planning conditions have previously required its retention by any developer of the site. However, as time passes and the pavilion progressively decays, it's hard to visualise a happy ending for this lovely piece of history. 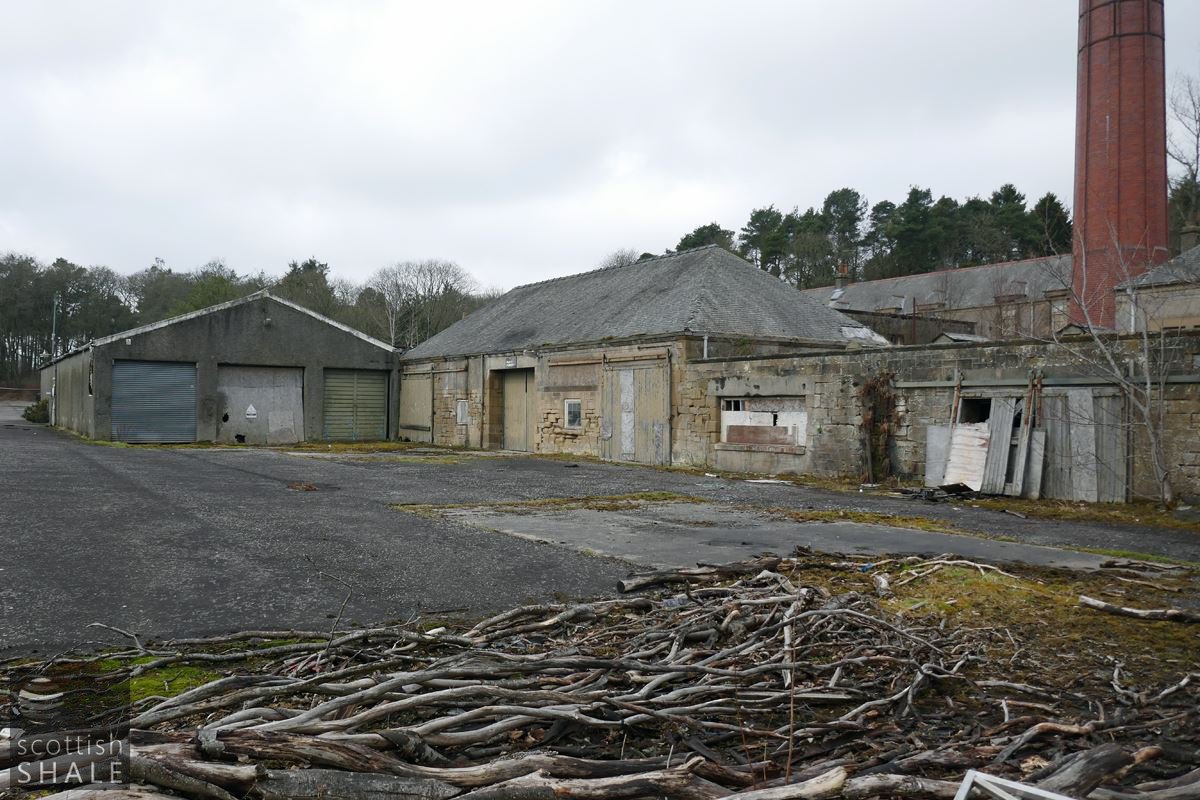 Original site of Bangour station. The station sidings would have been approximately in line with the three doors of the shed on the left. 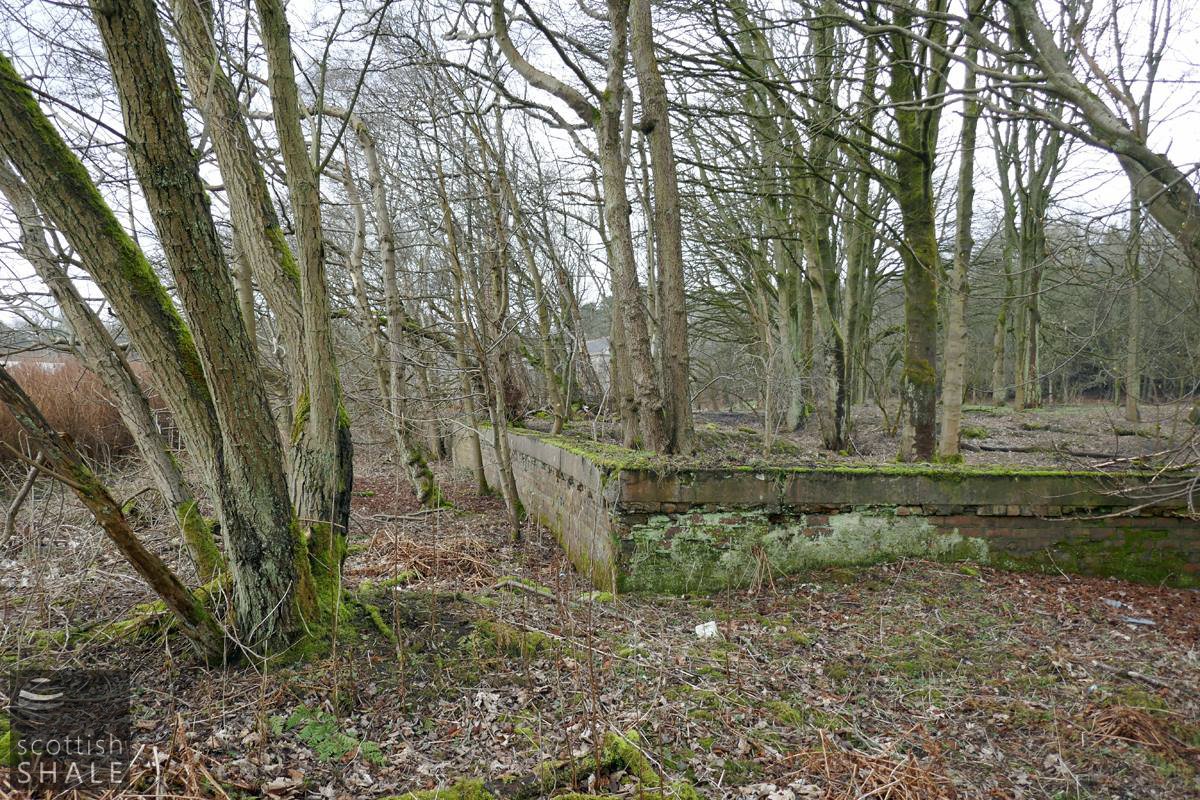 Goods loading bank to the east of the passenger station. 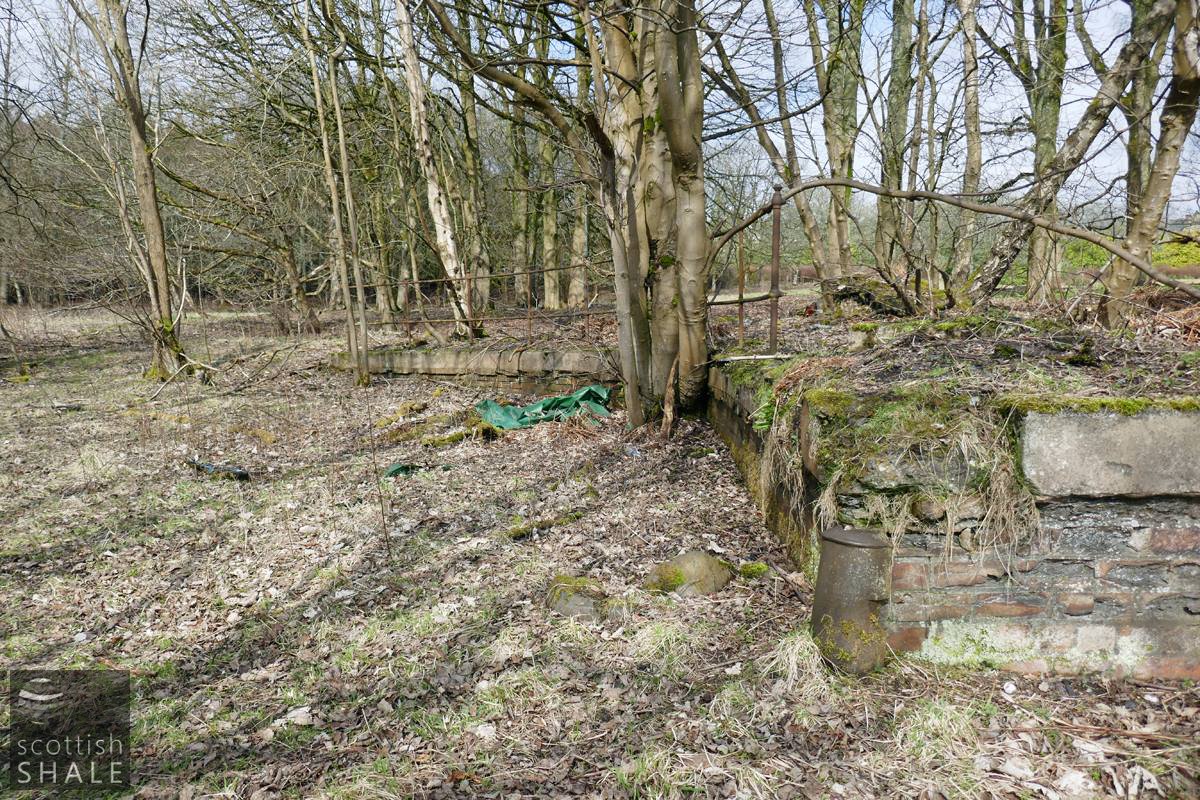 Loading bank and curved wall, seemingly at the site where coal was offloaded to fuel the electric power station. 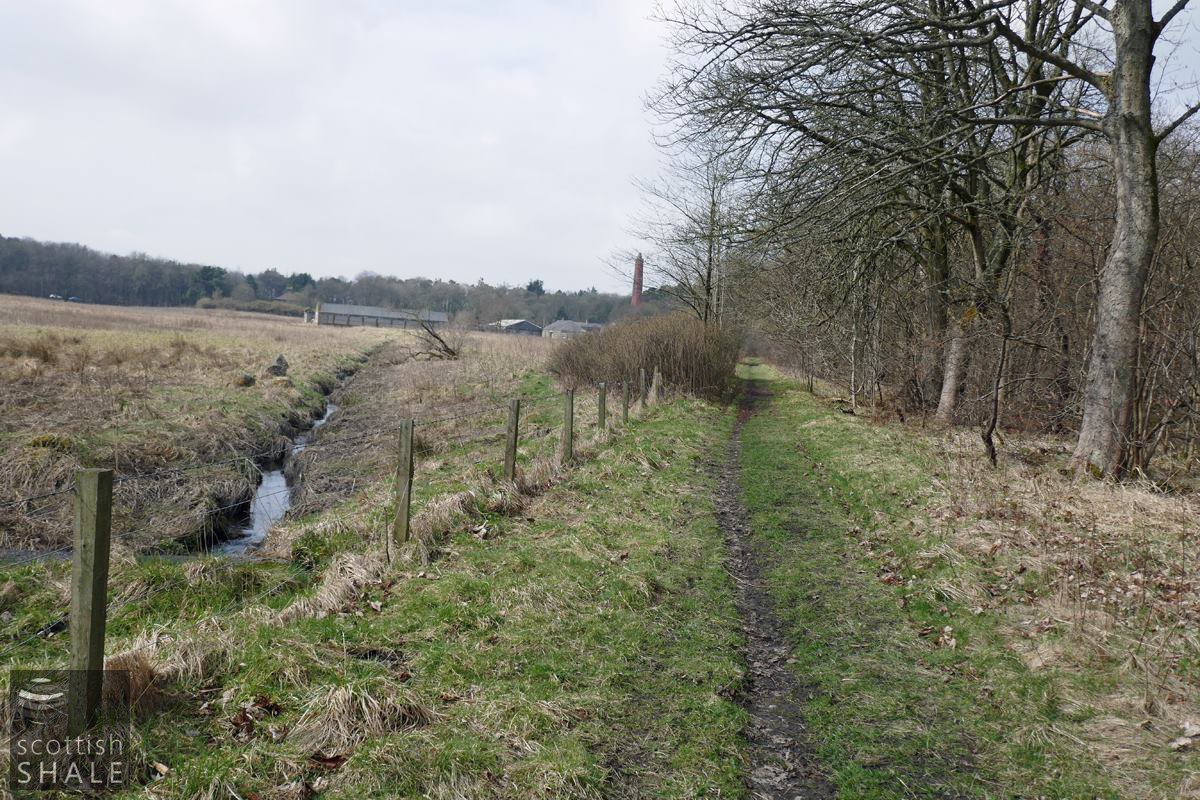 Route of the railway, looking west. with the chimney of the power station marking the terminus of the line.