An Excursion “every bit as good as Portobello”

Wallaces cave by the River Avon 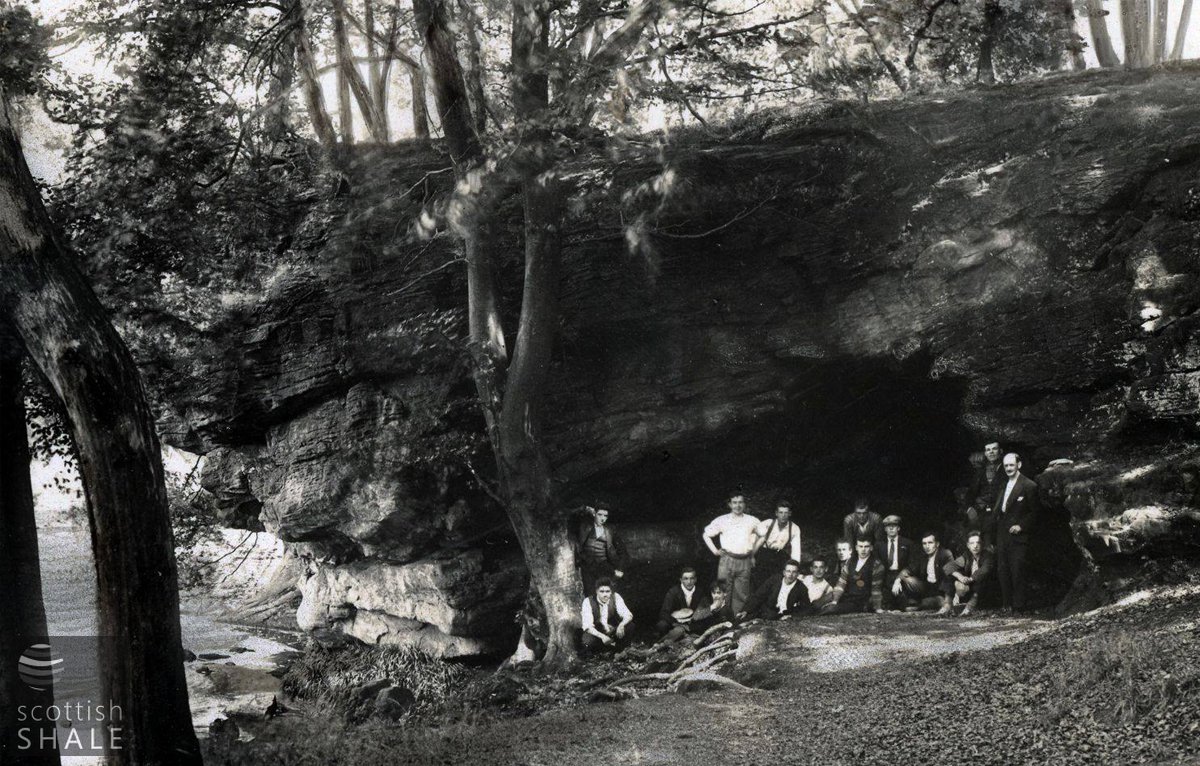 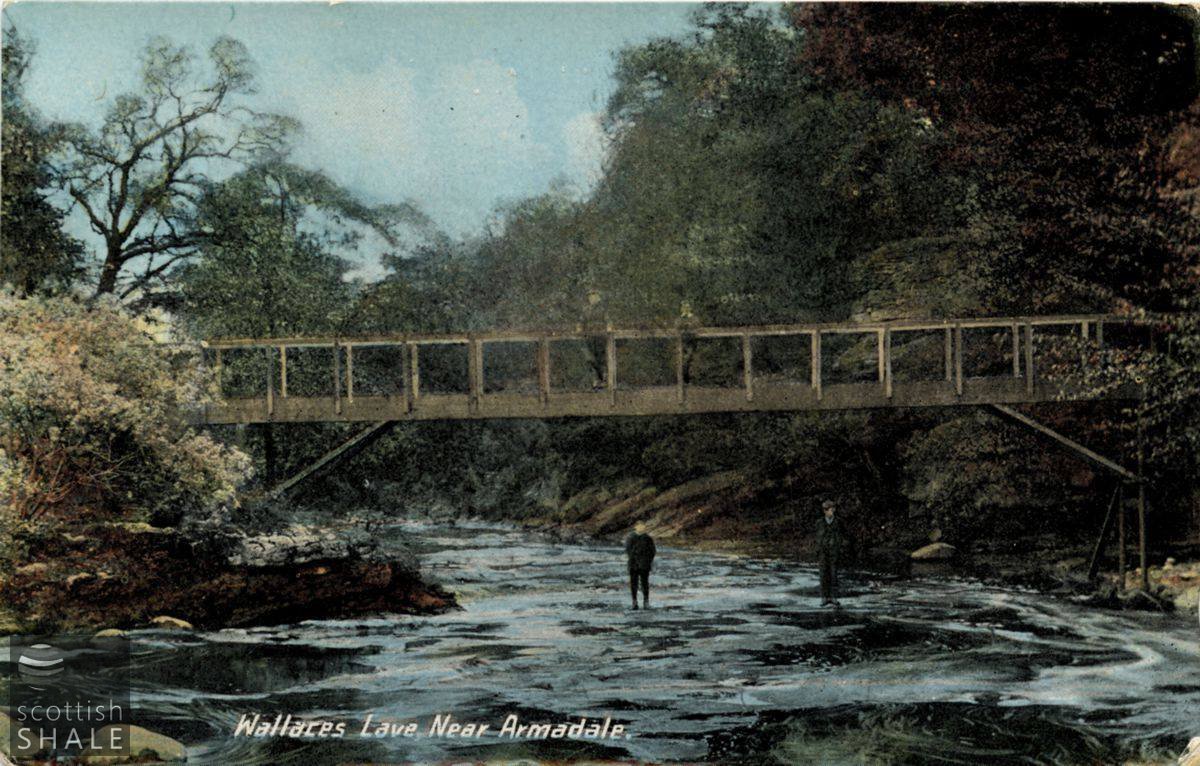 The rather rickety timber bridge, c.1910
According to a newspaper account from 1923; "the precarious state of the bridge at Wallaces cave is a drawback to the enjoyment of mothers and children".

Early in the 20th century, the wooded valley of the river Avon around Wallace's Cave became a favourite destination for picnics and excursions from Bathgate and surrounding industrial districts. One account described such a visit as opportunity “to spend a couple of hours frolicking away from the hum of the factory and the busy throng”

The rocky outcrop and natural arch of Wallace's cave was supposed by some to have been a hiding place of William Wallace following the battle of Falkirk. The first edition OS map, published in 1854 shows the “cave” on the Linlithgowshire bank of the river linked by a footbridge to the Avon Steel Works on the Stirlingshire side. The steel works were probably established early in the 19th century, and produced modest quantities of high quality tool steel using a process that involved heating iron in fireclay crucibles then hammering out impurities using large water-powered drop hammers. Production seemed to have ceased during the 1880's and the works gradually fell derelict. Avon cottages, once home to steel forge workers, continued to be inhabited into the 20th century. 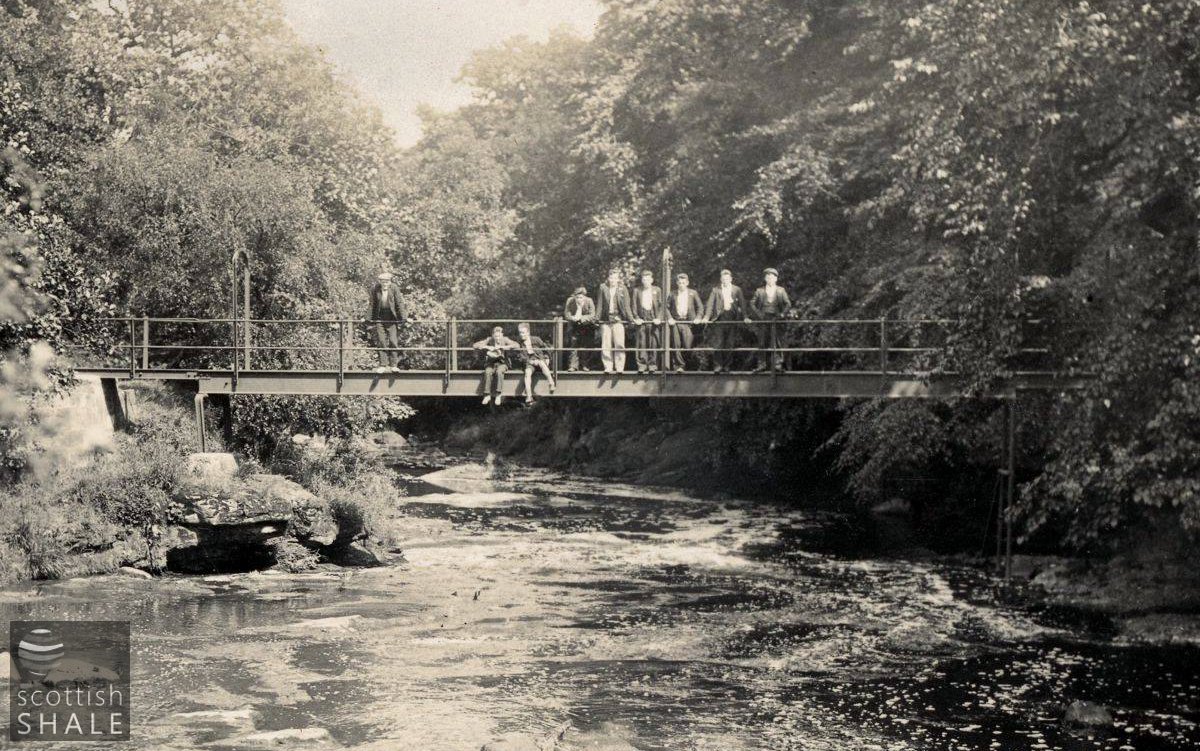 The all-steel bridge built in 1925 for £150, used by picnickers but also "serves as a direct route for workmen to reach their places of occupation." 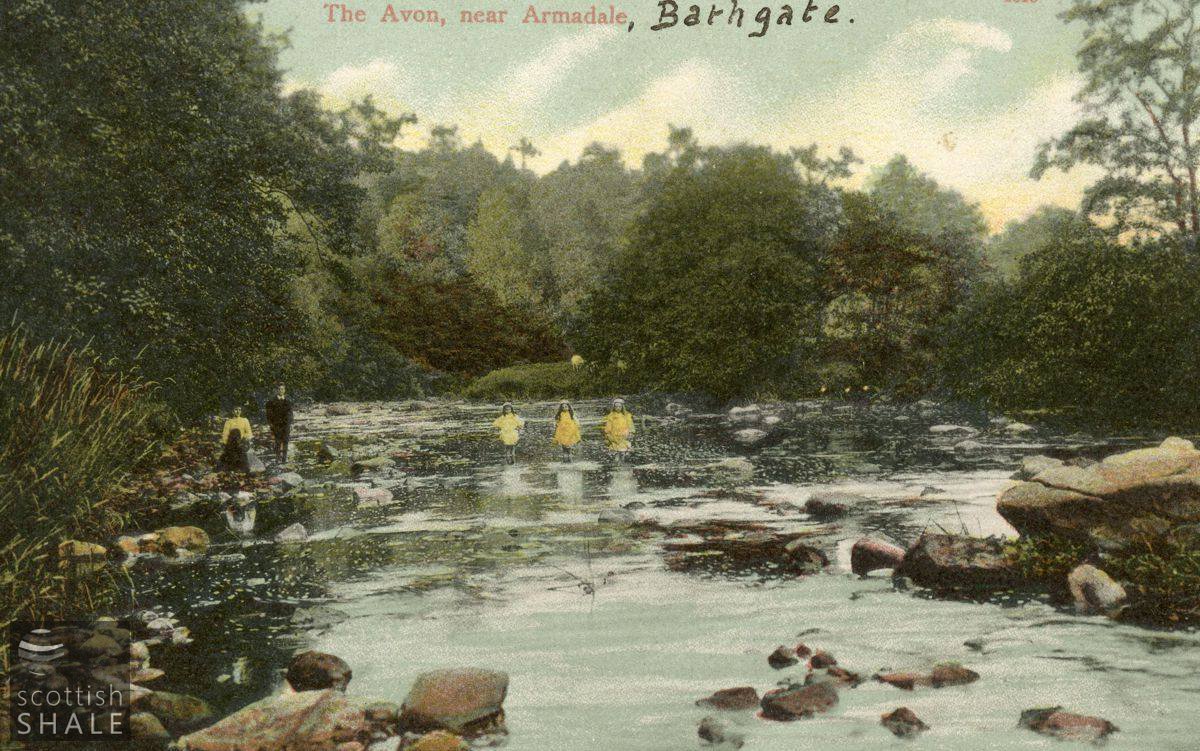 Paddling in the Avon, c.1910.
Pollution only became a problem later in the century with effluent from mining and paper making killing off most river life.

This ditty by "Man on the wing" was published in the Linlithgowshire Gazette on 30th July 1948:

Wallace's cave had long been popular with ramblers, and in about 1892 funds raised by public subscription to replace the old footbridge across the river. Mass excursions to the cave became popular in the opening years of the 20th century, often organised by temperance groups such as the Rechabites , the Good Templars, and St Andrew Catholic Total Abstinence Society. Large groups usually travelled by train from Bathgate Upper to Westfield station, then trekked the three-quarters of a mile to Wallace's cave. Tents were pitched on the old steel works site, games of football and cricket were played, and there was dancing, music and hampers full of picnic refreshments. General excursions soon followed, and it became the custom that special trains were run on the Monday of the Bathgate trade holidays to convey excursionists to festivities at Wallace's cave, where in 1906, the Bathgate Public Band entertained a crowd of over 500. Summer-time excursions were also popular on Wednesday afternoons to coincide with half-day closing.

As motor transport became more widespread, excursions from Armadale and more distant parts became possible. In 1913, the large volume of visitors, and the damage done to property, led the landowner to ban access across the fields from Westfield. The lengthy detour required spelled the end of excursions by rail In the changed world after world war one, picnic excursions to Wallace's cave remained popular with Sunday schools, guides and scout groups. Perhaps the largest gathering at the cave took place in 1932 when 1,200 people took part in an Independent Labour Party ramble and picnic.

The condition of the footbridge across the Avon was a frequent concern. Various novel efforts were made to raise funds to replace the old timber structure, but it was often left to the local scout group to effect makeshift repairs with planks and nails. In 1925, the two county authorities eventually agreed to fund an all-steel replacement. This steel bridge survived until about 1994, although latterly in a decrepit condition. It was replaced with an elegant arched steel structure as part of the construction of the River Avon heritage trail, which now provides easier access to this fascinating area. 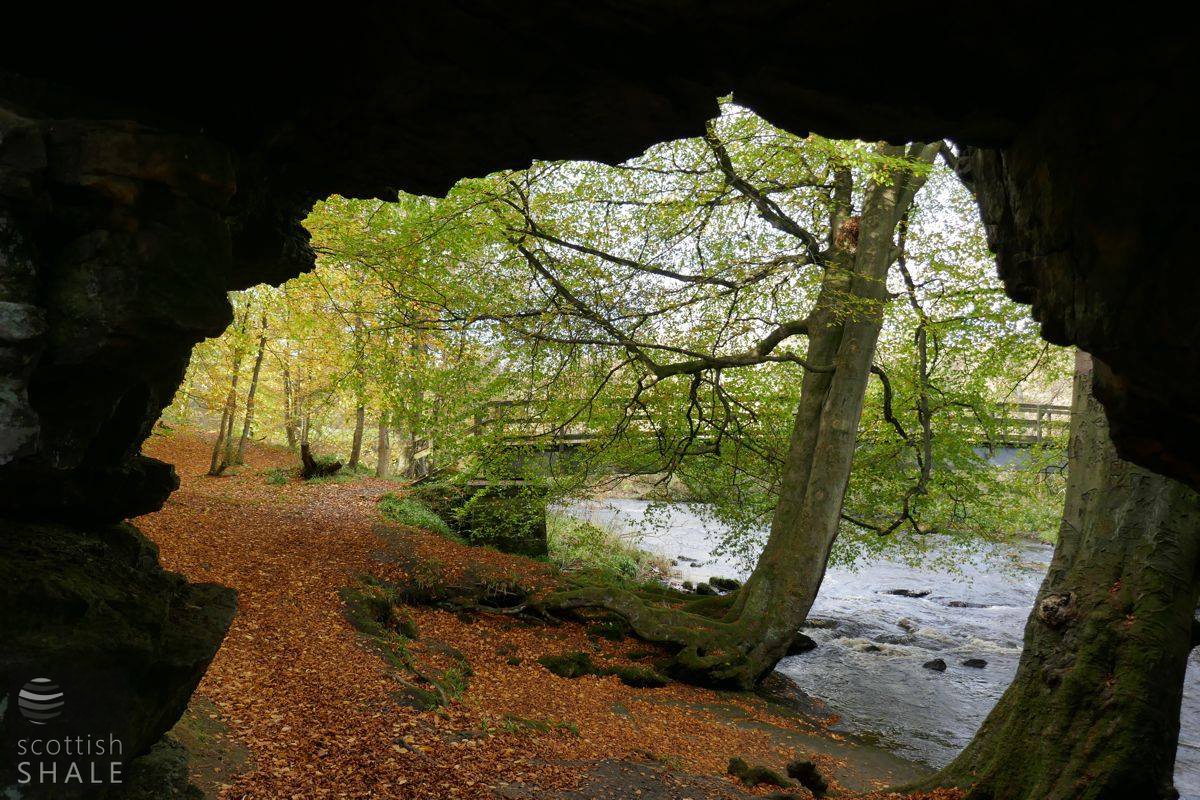 Peeking out of the cave, with the 1994 bridge beyond. 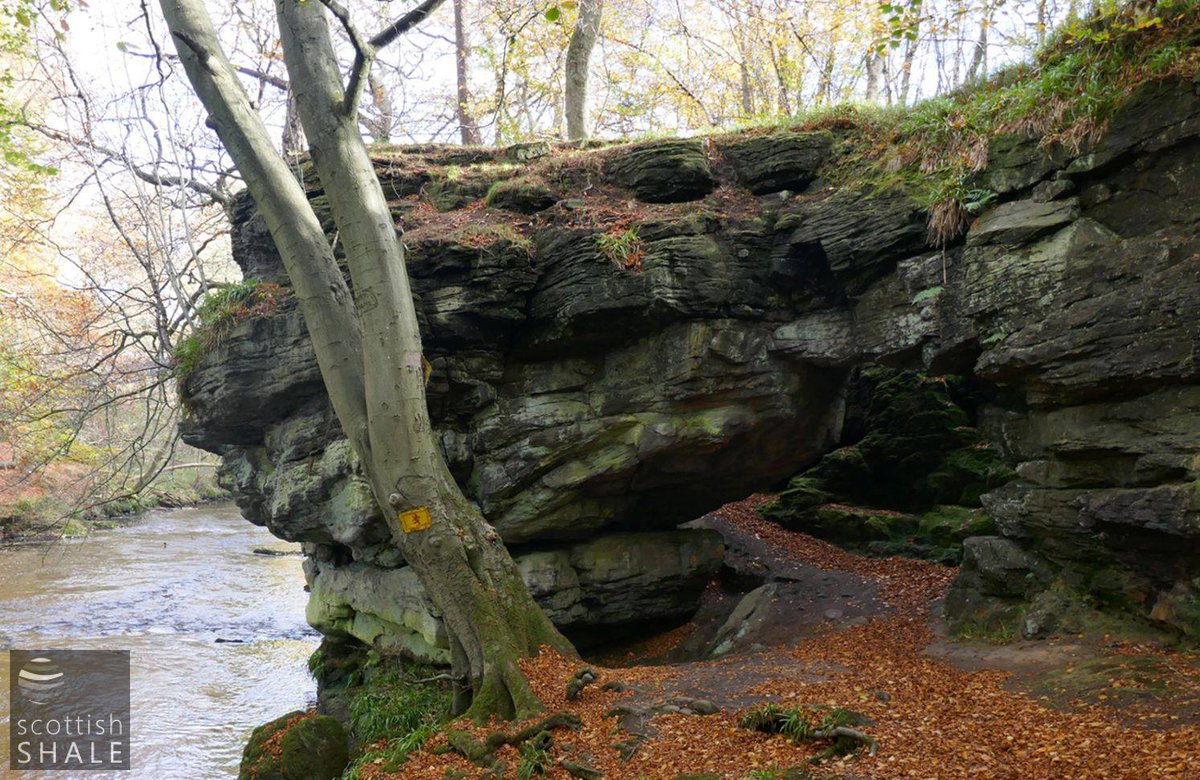 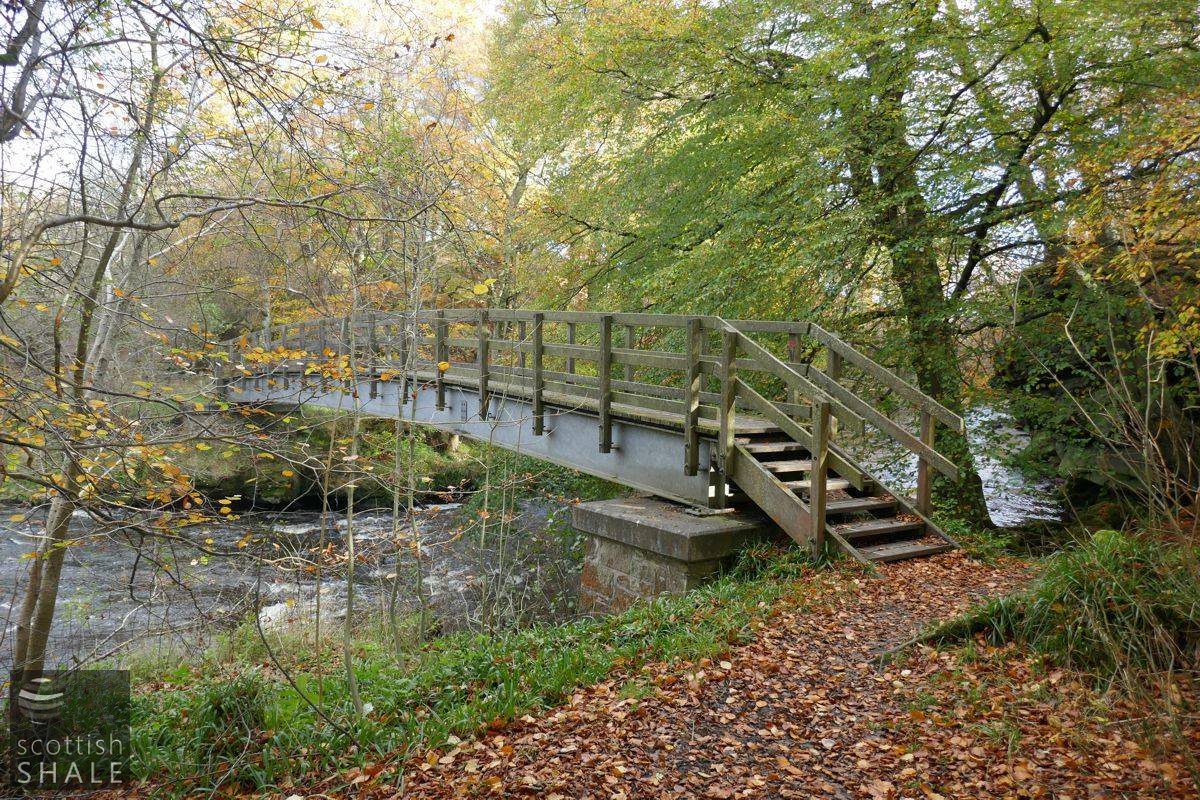 The new bridge for the River Avon heritage trail. 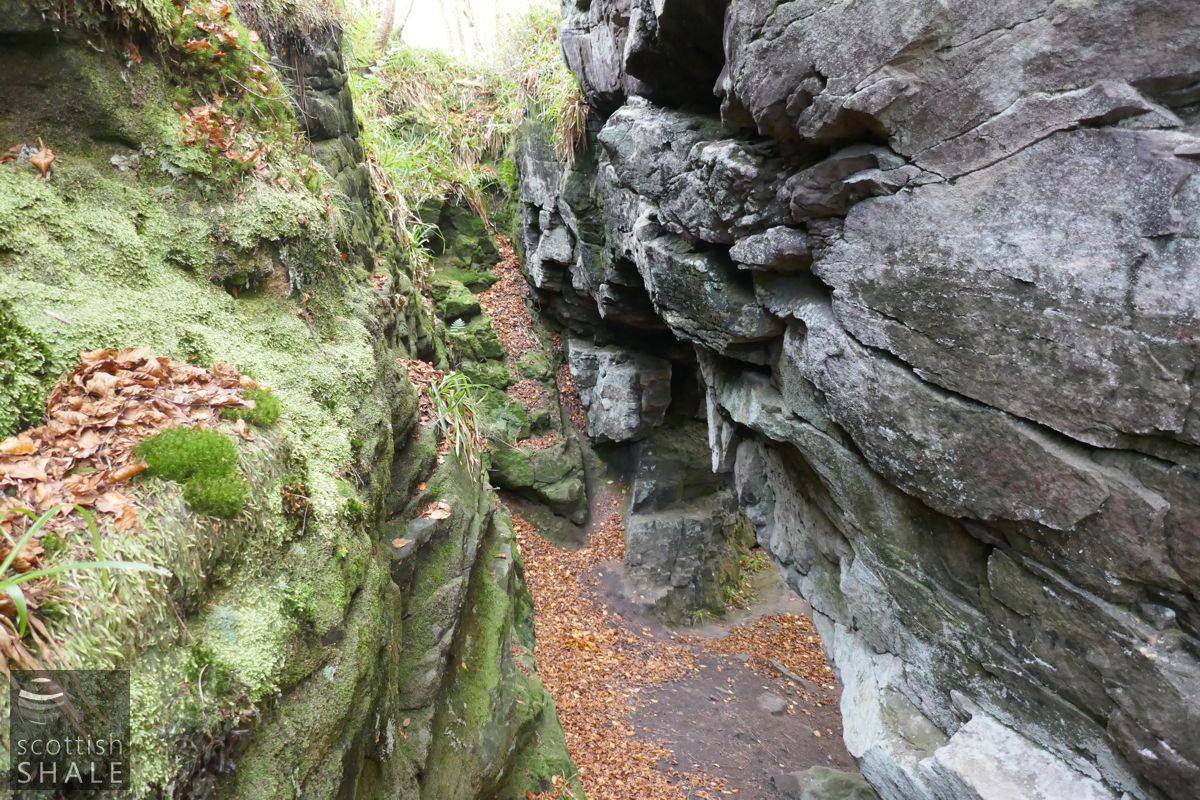 Behind the arch of Wallace's cave.

The area c.1896, with the steel works disused but seemingly intact. The 1913 map shows the works as a roofless ruin. 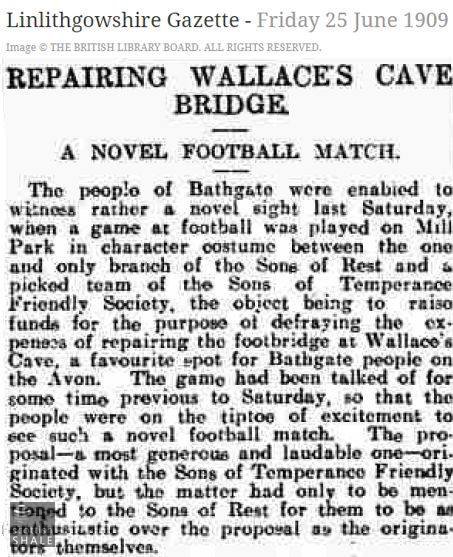 A bold effort to raise funds the renewal of the bridge, however it was 15 years before a new bridge was built. 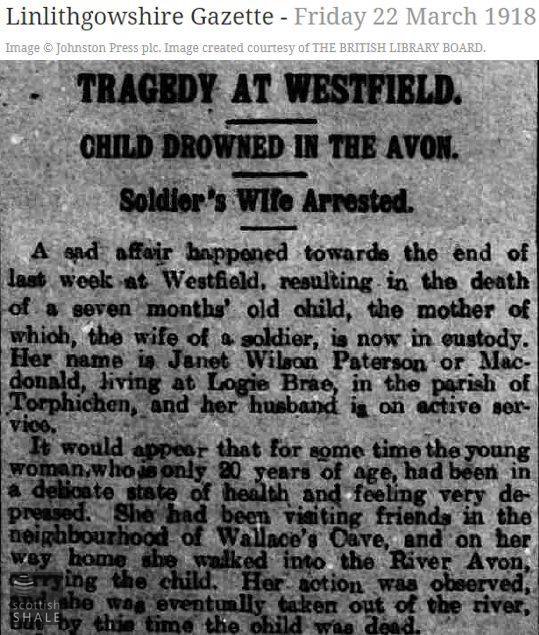 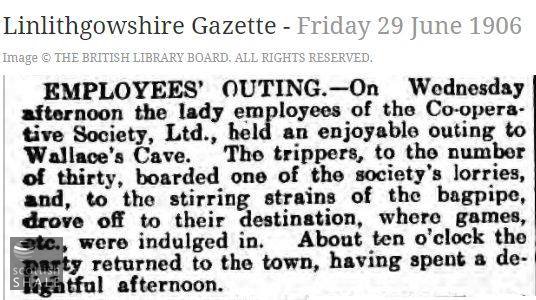 A good use of a half-day holiday. 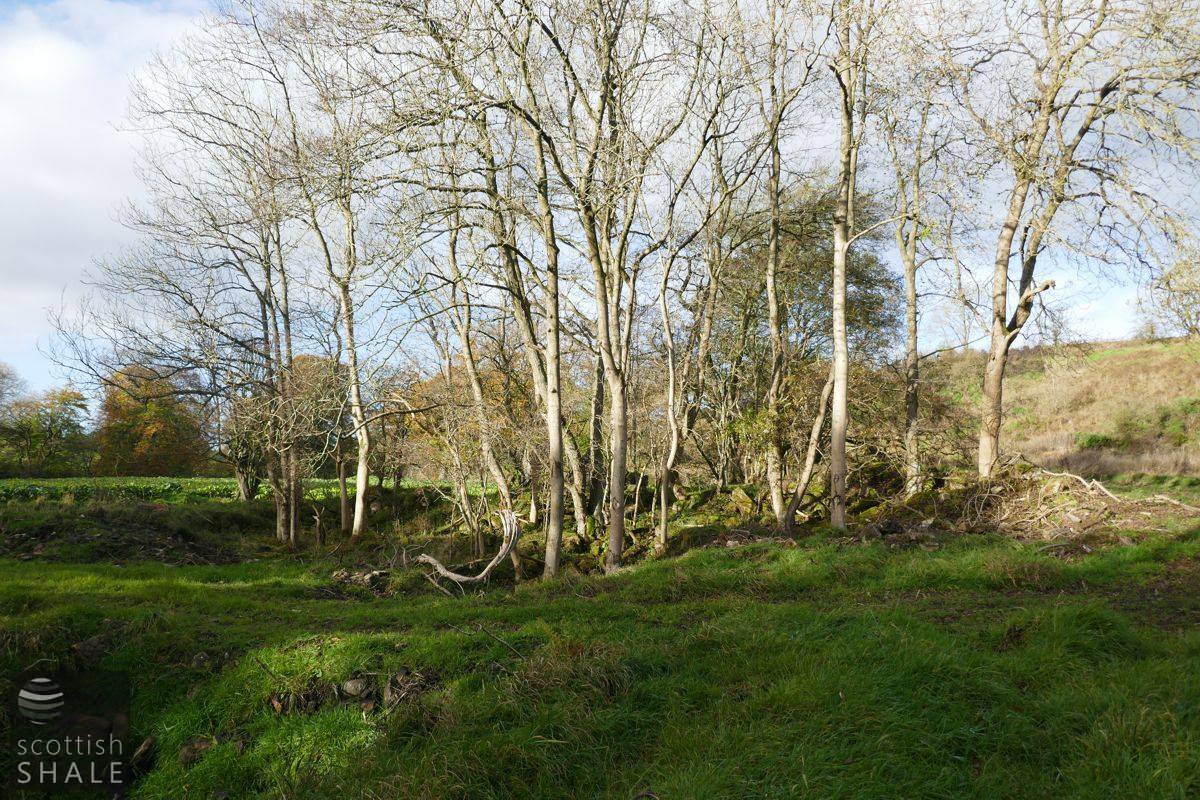 The steel works site, with the remains of stone walls and watercourses. 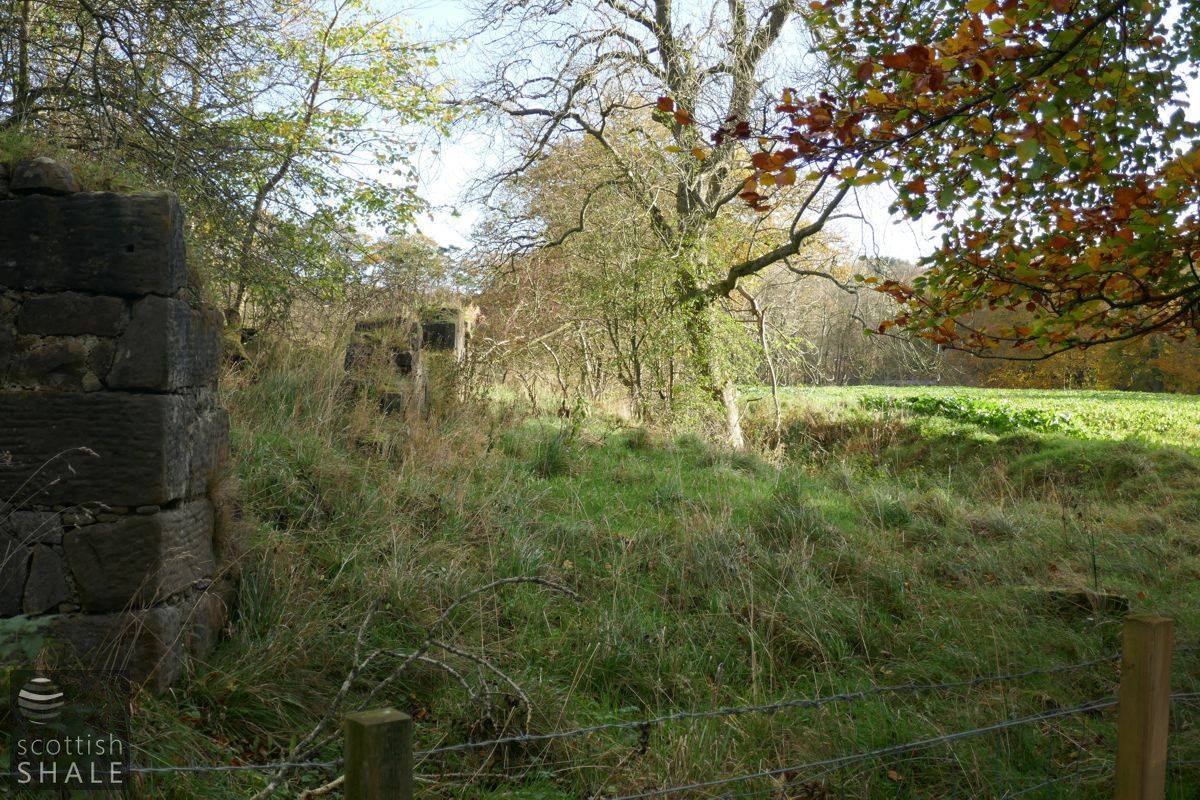 The ruins of Avon cottages, which housed the workforce of the steel forge. The ditch marks the route of the mill lade. 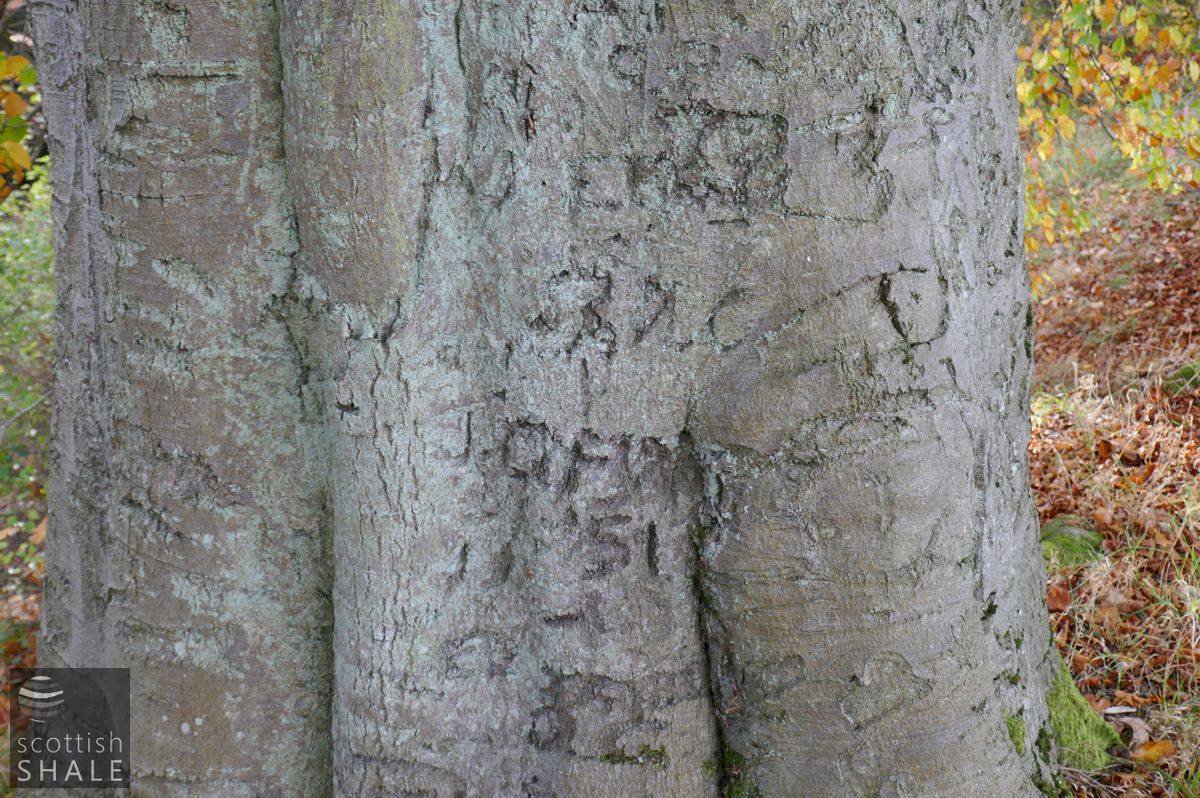 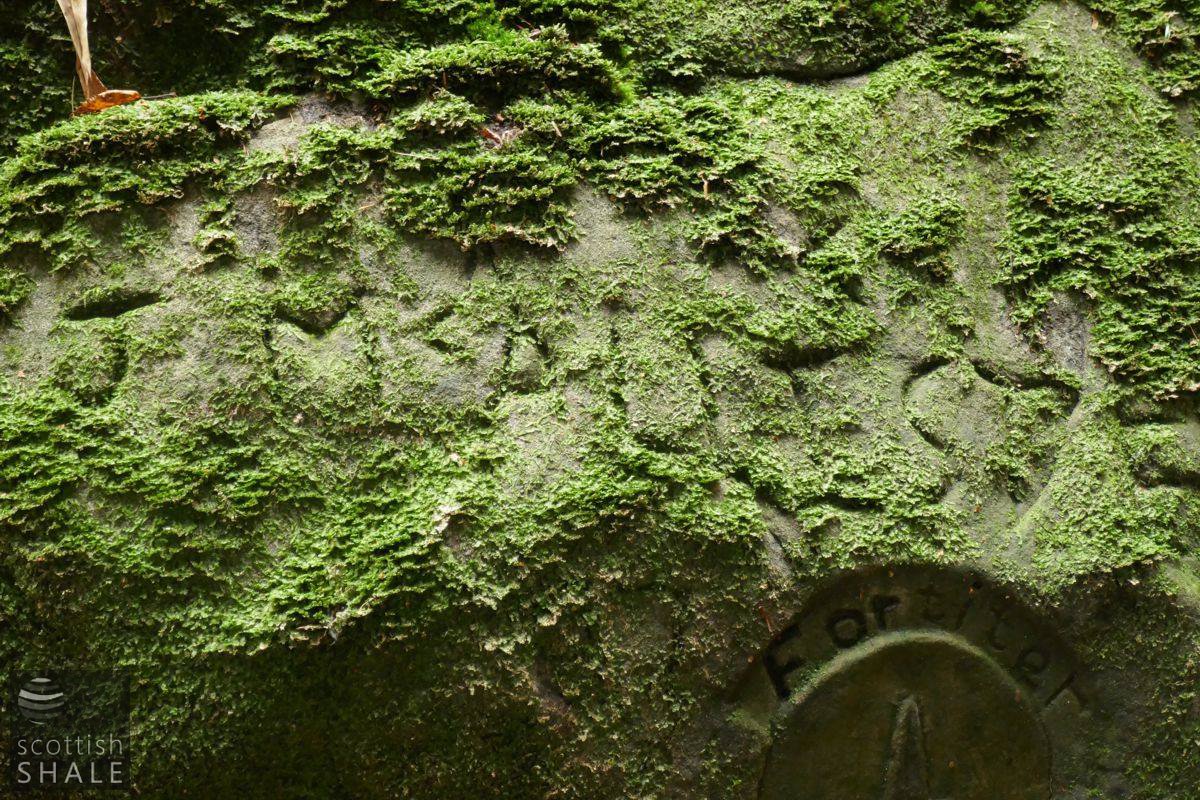 A little of the inscribed graffiti around Wallace's cave, evidence of idle hours many years ago.