The West Calder Loop Line Viaduct over the Breich Water 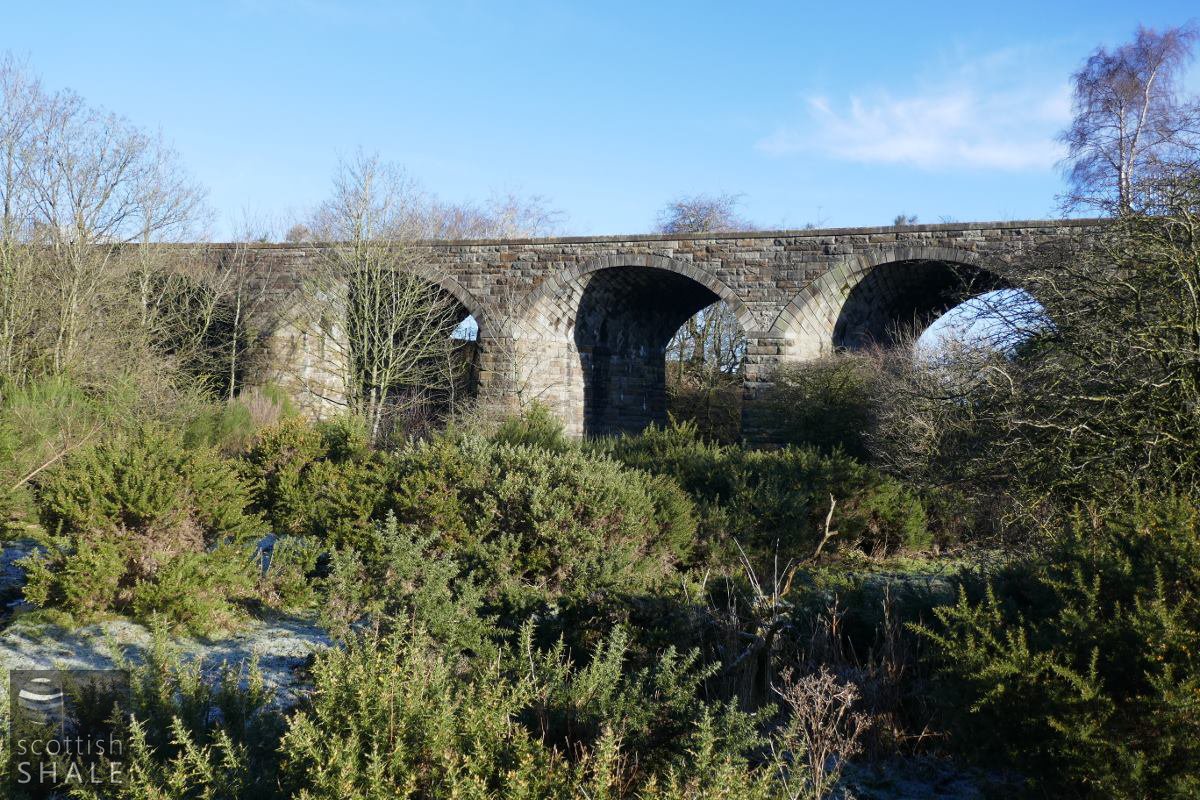 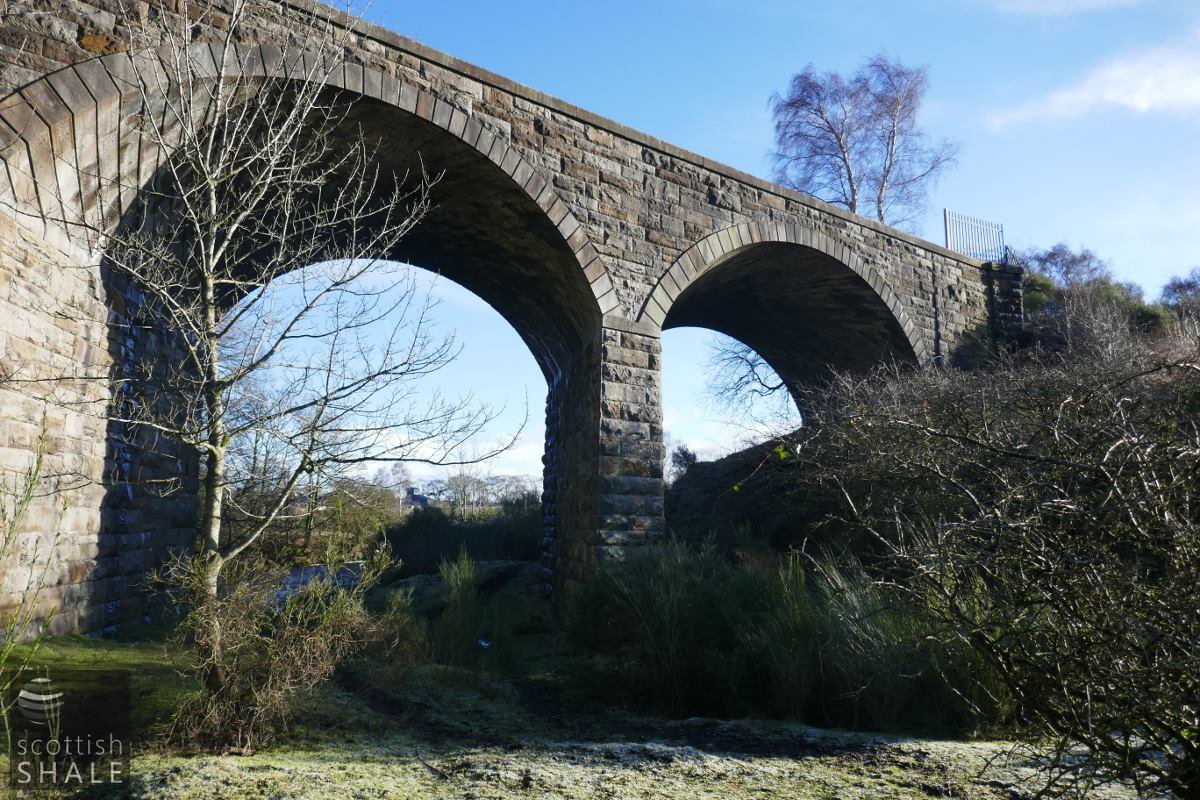 View from the ground, looking north towards Stepend.

The Caledonian Railway’s Mid-Calder and Cleland line, opened in 1869, completed the route between Edinburgh and Glasgow via Shotts. To serve many of the oil works and coal mines in the West Calder area, a goods-only loop line was also constructed, splitting off from the main line near Limefield, and rejoining just beyond Loganlee.

No expense seems to have been spared on the construction of an elegant and solid four arch stone viaduct, built on a graceful curve, that carried the West Calder Loop Line across the Briech Water. This still survives in remarkable condition, hidden away in the river valley out of sight from surrounding roads.

Not long after the new railway was opened, the shale oil bubble burst, and most of the shale oil works served by sidings and branches from the loop line were abandoned. The first Westwood oil works was demolished in about 1871, Grange oil works in 1875 and Gavieside in 1880. Following closure of the Briech oil works in 1903, only occasional trains ventured along the sleepy, overgrown line to serve local farms. 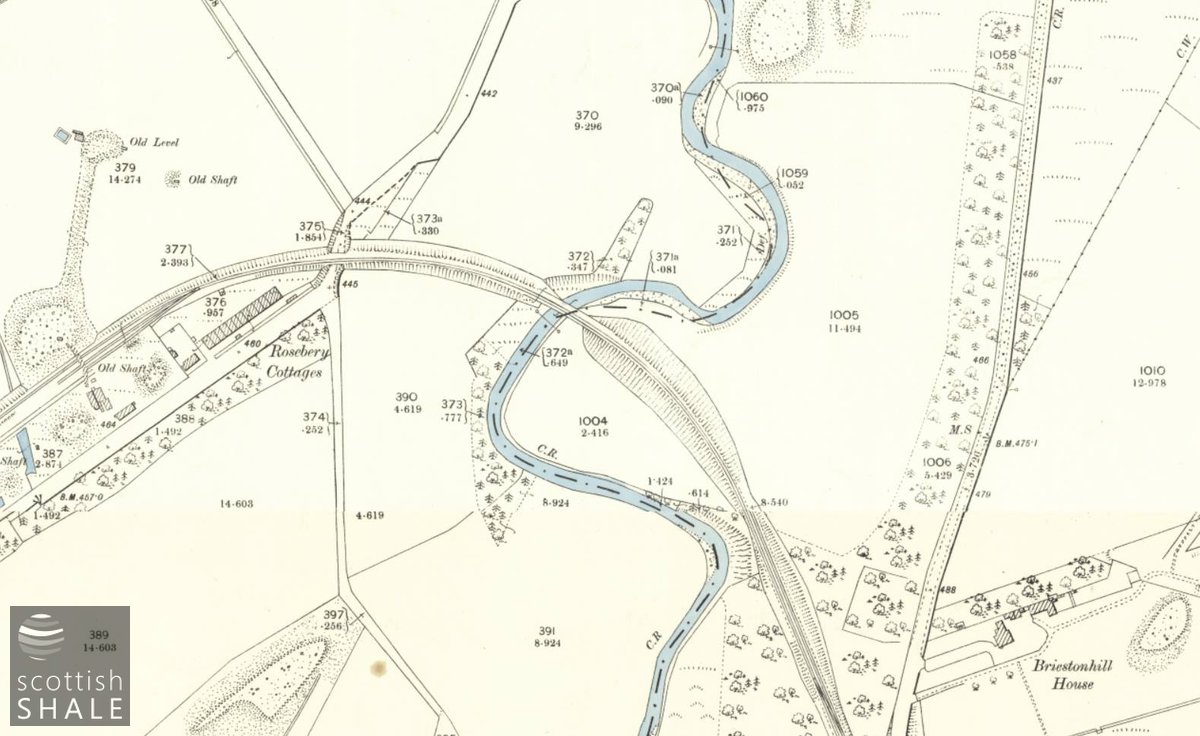 The site of the viaduct, on a gently sweeping alignment, from the 25" OS map c.1895 - image courtesy of National Libraries of Scotland. Only later was a new line installed to serve Westwood pit, and the "oakbank cottages" built to house its miners. 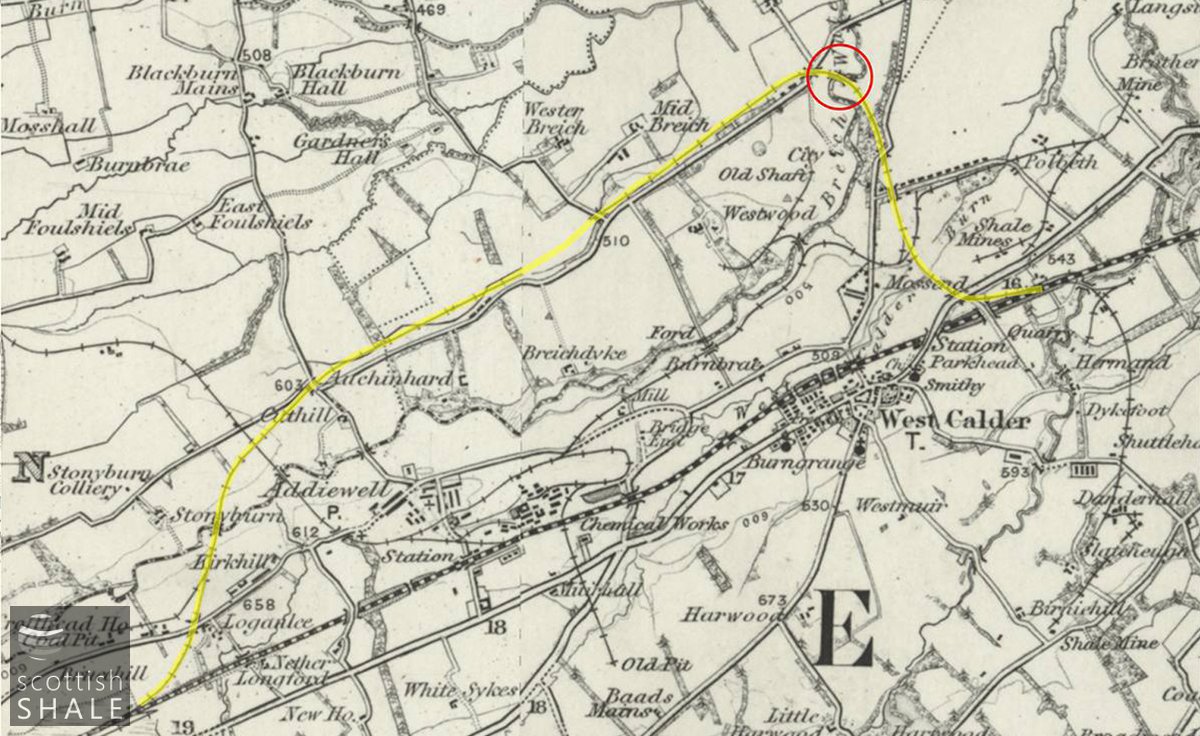 The route of the West Calder loop line, with location of the viaduct circled. 1" OS map c.1890 - image courtesy National Library of Scotland.

The eastern part of the loop line, including the Breich Water viaduct, enjoyed a new lease of life when the Oakbank oil company sunk a new deep pit to the Dunnet shale at Westwood in 1915, served by a new siding leaving the route of the loop line just west of the viaduct. Westwood shale was transported by rail for retorting at Oakbank oil works. During the Second World War the last of the shale oil works – the new Westwood Works - was build adjacent to Westwood pit, gradually creating the bing now known as the Five Sisters. Tankers of crude oil made their way along the loop line from Westwood and onto Pumpherston refinery until closure of the industry in 1962. The loop line was then abandoned.

The Briech Water viaduct doesn’t seem to be a listed building but continues to be owned by British Railway’s successors, the Historical Railways Estate, who care for over 3,000 redundant structures around the UK. The solid steel barriers preventing access to the deck of the viaduct are testimony that it is regularly inspected and might receive an element of maintenance. It’s hard to think what the future holds for the bridge however. In other locations, redundant viaducts make exciting paths and cycleways, but the Briech water viaduct now lies within private land, going from nowhere to nowhere, an elegant but hidden monument to the shale oil age. 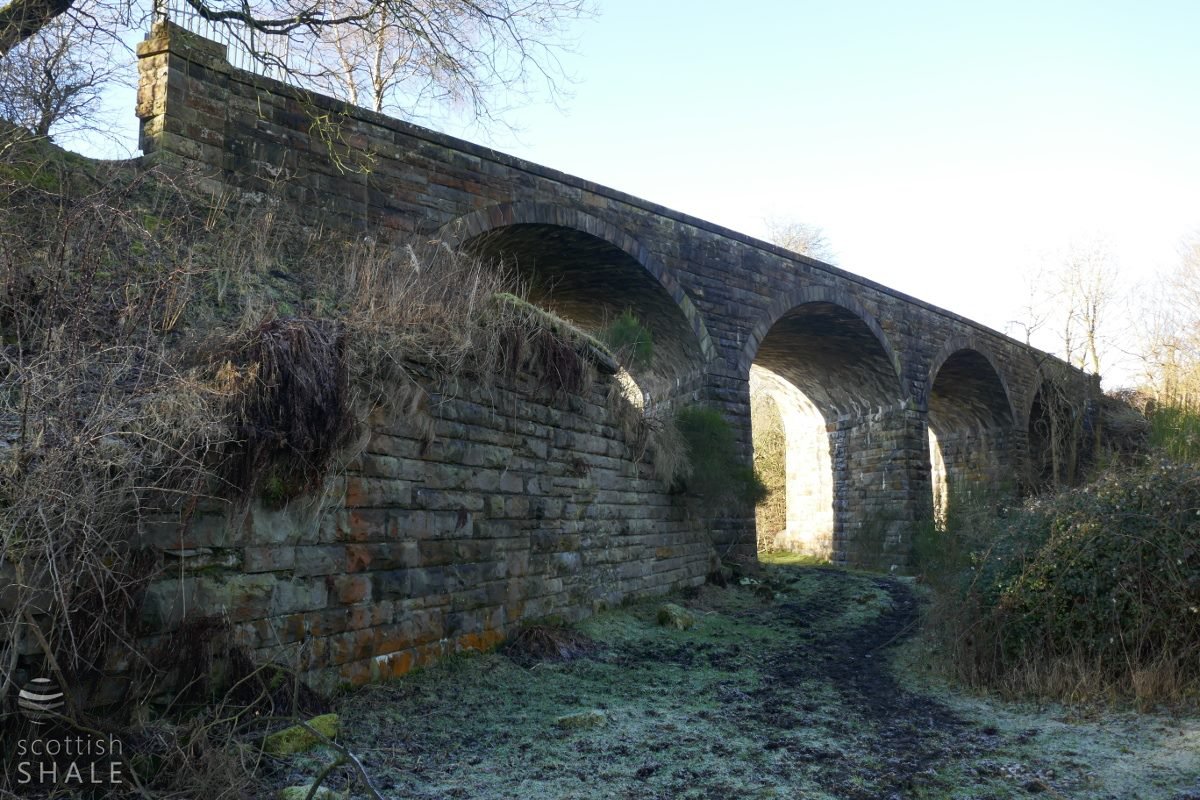 The viaduct from the upstream (northern) side. The purpose of stone abutment in the foreground is rather a mystery. The line of capping stones at its centre suggests some form of bridge deck once sprung from it, but there are no matching abutments across the river. 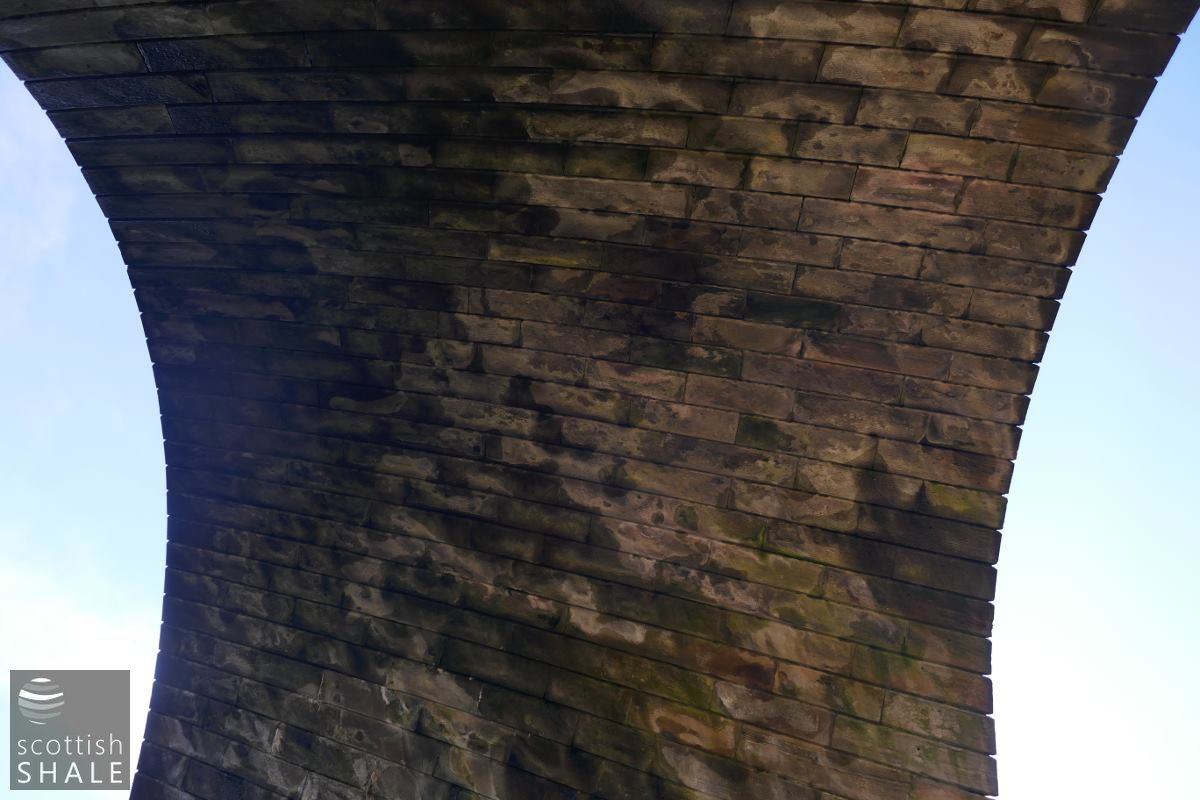 The soffit of an arch, with some evidence of water leeching through the structure. 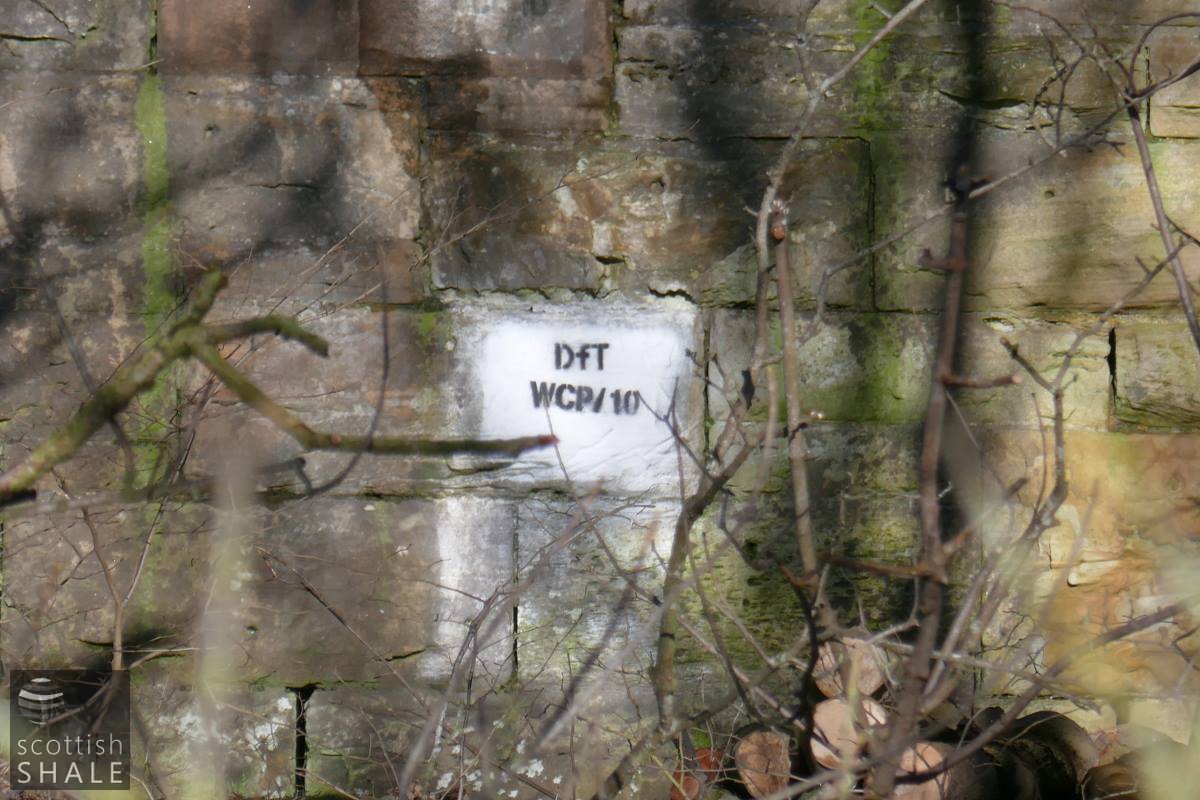 The writing on the wall, shows that the viaduct is an asset of the Department for Transport. 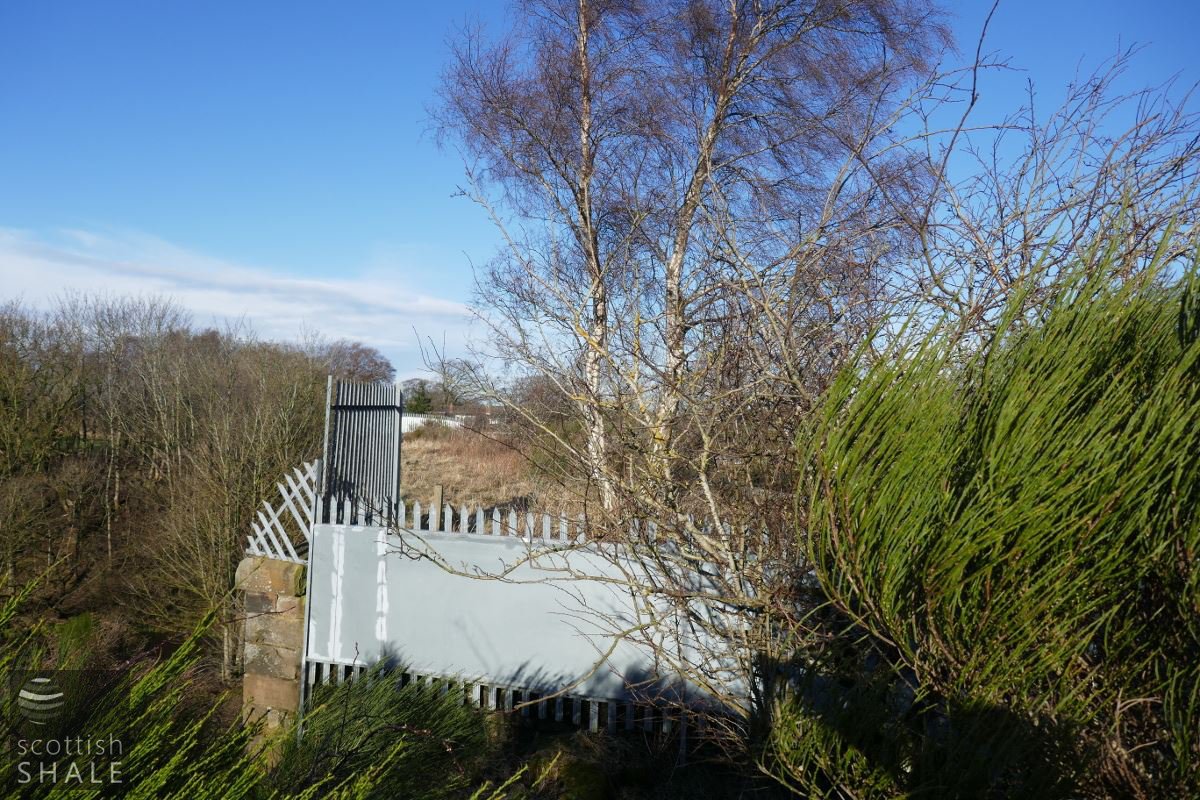 A very jaggy barrier prevent you from crossing the viaduct. 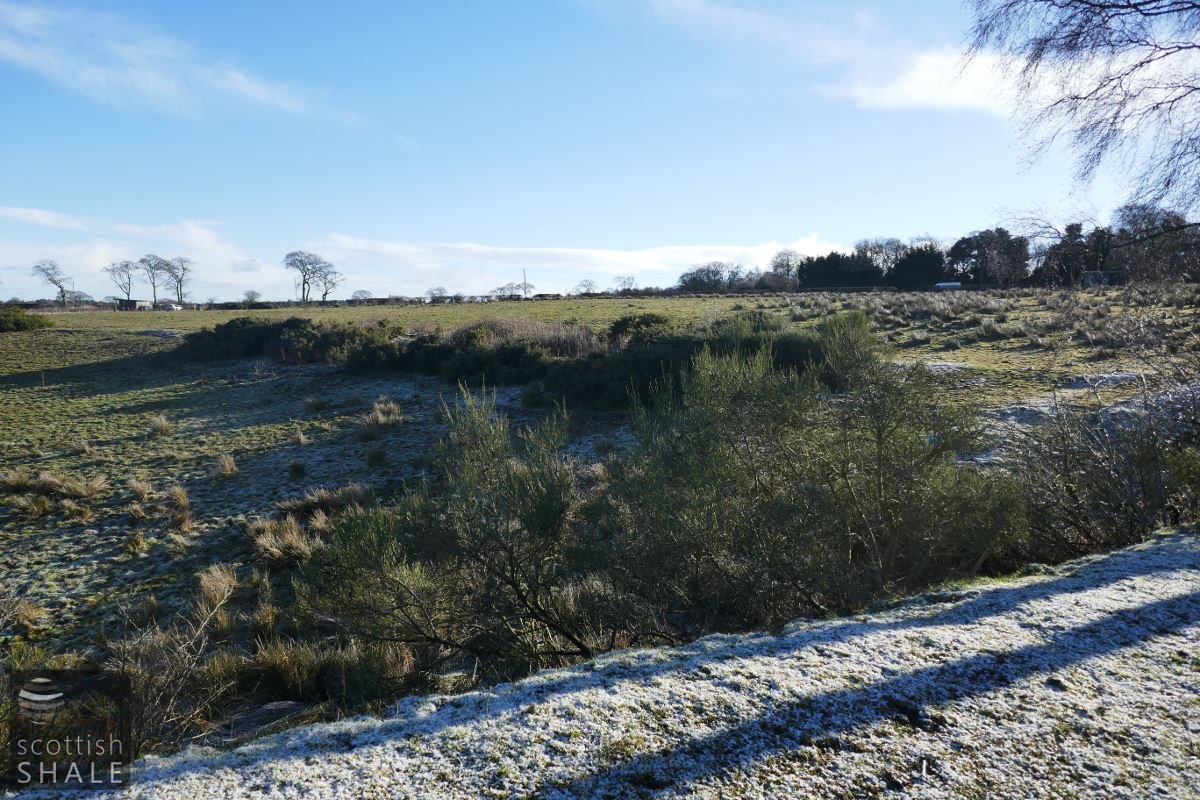 Looking east from the viaduct approach toward Briestonhill. The slight ridge and line of Broom in the field seems to represent the branch from the loop line to Grange oil works - now site of Stepend poultry farm.