KIRKLISTON is a parish and village partly in Edinburghshire, but chiefly in Linlithgowshire, and in Linlithgow poor combination; the village, anciently called Temple-Liston, from the fact that the Knights-Templars formerly had an establishment here, is situated on the left bank of the Almond, on the road from Edinburgh to Falkirk, and has a station on the Edinburgh, Ratho, and Dalmeny branch of the North British railway, 8 miles west from Edinburgh. The Niddry burn, in the northern part, and Brox brook in the southern part of the parish, both tributaries of the Almond, join that river in this parish. The village is well built, the principal industry being shale mining, but there is also a large distillery. The land is generally rich, well cultivated, and produces excellent crops. Here Lord Stair first introduced the culture of cabbage in the open fields.

By the " Local Government (Scotland) Act, 1889 " (52 and 53 Vict. c. 50), boundary orders 83 and 122, a part of Dalmeny parish was added to Kirkliston. The parish church is an ancient structure, originally erected in the Norman period, and retains a fine doorway in that style; within the church is the mortuary vault of the noble family of Dalrymple, Viscounts and Earls of Stair, and here was buried Elizabeth (Dundas), wife of John, 1st Earl of Stair, and the "Lady Ashton" of Sir Walter Scott's "Bride of Lammermoor." The church affords 700 sittings. The "Catstane," a remarkable monument of antiquity, within a field which stands on Westbriggs farm, on the east bank of the river Almond, rises 4 feet above the ground, and is about 11 feet in circumference; it bears a much worn inscription as- yet undeciphered. Newliston,- now the seat of Thomas Alexander Hog esq. J.P. was once the property and favourite residence of the distinguished soldier, Field-Marshal John, 2nd Earl of Stair K.T. who fought at Oudenarde and Dettingen, but the estate was sold by John, the 6th Earl, who died in 1789; the mansion was built in 1794 from the designs of William Adam, and the plantations in its grounds are said to have been arranged so as to represent the disposition of the British army on the eve of the battle of Dettingen, fought 16 June, 1743. Carlowrie Castle is the residence of Mrs. Hutchison, and Clifton Hall, of John D. Bell esq. The Marquess of Linlithgow K.T., G.C.M.G., G.C.V.O., P.C. Mrs. Steele-Maitland, of Barnton, T. A. Hog esq. J.P. and Stewart Clark esq. of Dundas, are the principal landowners. Area of the parish, 8,010 acres ; rateable value in 1902, including minerals and railways, £36,166; population in 1891, 3,777, and in 1901 was 3,904, civil parish, 3,874 ecclesiastical parish and 1,023 village. 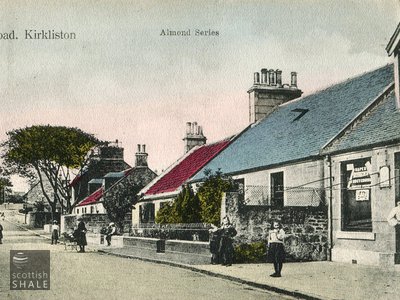 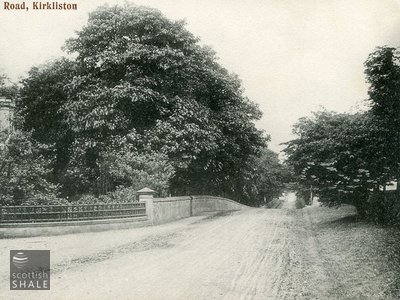 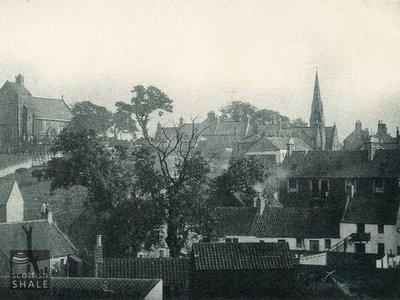 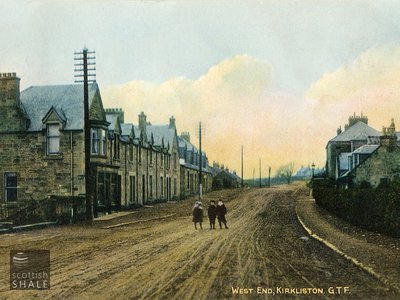 Postcard - "West End, Kirkliston. G.T.F." Coloured printed postcard showing a group of children standing in the street in the West End of Kirkliston. 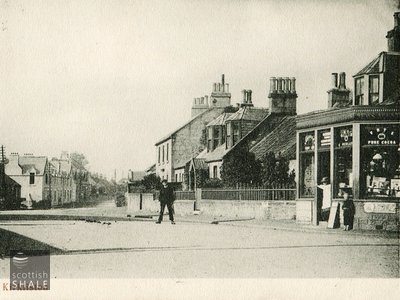