QUEENSFERRY is a seaport town on the Firth of Forth, wholly in the parish of Dalmeny, under Secretary of Scotland' s Order, small debt court district of Linlithgow and poor combination of the same, and is 8 miles west from Edinburgh and 8 east from Bo'ness; it is sometimes styled South Queensferry, to distinguish it from the town of same name on the north shore of the Firth of Forth, and took its name from the use made of the ferry by Margaret, the queen of Malcolm Canmore, in her journeys to and from Dunfermline.

Queensferry ecclesiastical parish, which is very small, faces the Forth, and is bounded on three sides by that of Dalmeny. As a royal burgh, Queensferry is governed by a provost, two bailies, and a town council. This burgh, together with Stirling, Culross, Inverkeithing and Dunfermline, forms the Stirling parliamentary district, constituted in 1708, and returning one member. The water supply is now obtained from Mid-Calder. There is a good harbour accessible at any time, and about half a mile distant is Dalmeny station, on the Edinburgh and Dunfermline section of the North British railway. At Newhalls (a little to the eastward of the town), is a ferry across the Forth, and a pier. A short distance westward is another pier forthe convenience of boats when they cannot make the former point. At this place the Firth is contracted to a gut of two miles in width; in the middle of the strait lies a small rocky island called Inchgarvie, and on a height above the town stands Dundas Castle, with a modern house adjoining and bearing the same name. The Established church was consecrated in 1633; there are also United Presbyterian Episcopal and Roman Catholic churches. At the west end of the town are the ruins of the Carmelite priory of St. Mary, dating from 1330. 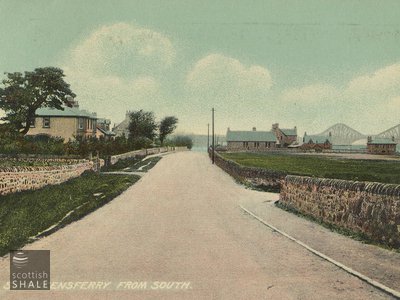 Postcard - "So. Queensferry From South" 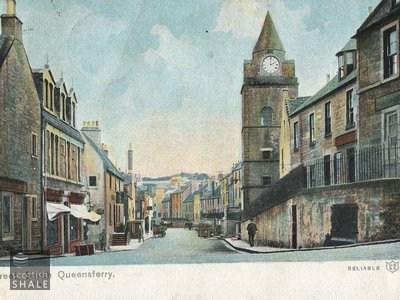 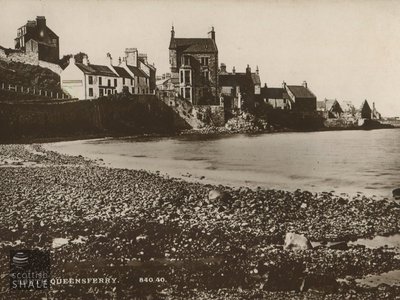 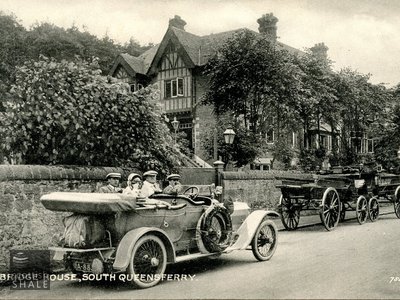 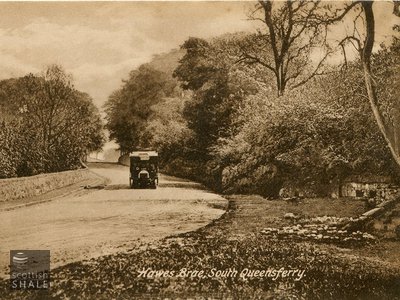