Andrew Graham Yooll was described as "a gentleman of varied and extensive attainments, both in science and art, and also in languages, and who, for many years, has devoted himself the study of the oil trade in its various branches."

Unravelling his history is complicated by the varied spellings of his surname as "Yoole" and "Yool", and the inconsistent use of the double surname "Graham Yooll". The hyphened "Graham-Yooll" name seems to have been adopted by the family early in the 20th century.

Andrew Graham Yooll was born c.1820 in Langholm, Dumfriesshire. He appears in the 1861 census as an oil merchant and refiner, employing six men and one boy, resident in the London burgh of Camberwell. At or about that time he was partner in the firm of Humfrey, Yooll & Co. who operated a refinery at Suffolk-grove, Southwark which processed imported Canadian crude oil. The works appear to have closed following outcry over the obnoxious fumes produced by the process.

Yooll's partners in this enterprise included Charles Humfrey, who had been involved with various oil businesses in the London area since the 1840's, latterly in association with his son Charles Humfrey junior. For a short period until their bankruptcy in 1862, the Humfreys operated the Wareham oil works in Dorset, where oil was produced from Kimmeridge shale.

A Charles Humphries (perhaps Charles Humfrey Jnr?) was manager of the St. David's Oil Works, Saltney, near Chester, owned by the Mineral Oil Company; of which Ebenezer Waugh Fernie was managing Director. In the famous Young v. Fernie court case of 1864, Fernie testified that: 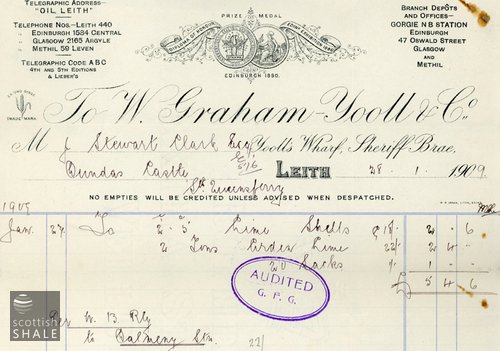 “We had for a time 24 vertical retorts (at Saltney) similar to those used by Mr. Young. They were erected in 1861, and worked the same as the horizontal retorts, …....They have now gone to Scotland to be used in my works there.”

The account of a dinner held in 1866 (see references, below) records that Yooll had supervised the erection of Fernie's Albyn oil works in Broxburn. This might suggest that A. Graham Yooll had some association with the coal oil industry in North Wales prior to his return to Scotland.

By 1866 Andrew Graham Yooll had established Kilrenny oil works near Anstruther in partnership with Edinburgh lamp-manufacturer Thomas Rowatt. As managing partner of the firm, resident at Cove Wynd, Priorsgate, Pittenween, he soon became a well-known and respected member of the local community. Between 1873 and 1882, he served as captain in the volunteer Fifeshire artillery corps, whilst his contribution to social events, dinners and more novel occasions (such as penny-farthing races!) were regularly reported in the local press. He appears to have become sole proprietor of the Pitcorthie mines that supplied coal and shale to the oil works, and the cottages built to house the workforce became known as "Yooltown" in his honour. As the oil business failed, efforts were made to extend his business interests in Anstruther, including the operation of a brick works.

In about 1886 Andrew Graham Yooll and much of his family moved to Jessfield House, Leith, and in the 1891 census was still described as an oil merchant. Jessfield House was also listed in various post office directories as home to Frederick R Graham Yooll (1866-1936) sometimes described as a scrap iron and machinery merchant, and William Graham Yooll (1854-1912), of the firm W. Graham Yooll & Co., moss-litter, cement and oil merchants and manufacturers and, from c. 1894, also cement, fireclay, and sanitary goods, brick and general builders merchants. Fittingly William, who as a child raced homemade bicycles around Anstruther, was also manufacturer of Pycnolene lubricating oil for cycles.

Andrew Graham Yooll died at Jessfield House in 1901. An internet search for the surname Graham-Yooll, reveals that Andrew's decendents remain a diverse and accomplished family.

NOTICE is hereby given, that the Partnership heretofore subsisting between us the undersigned, Edward Coleman and Andrew Graham Yooll, carrying on business at Crown-court, Old Broad-street, in the city of London, and at The Grove, in Southwark, as Oil Merchants and Refiners, has been dissolved by mutual consent. All debts due and owing to or by the said partnership will be paid and received by the said Edward Coleman, by whom, the business will in future be carried on. —

NOTICE. —The Partnership heretofore existing under the style of Humfrey, Yooll, and Co., and consisting of the undersigned partners, has this day been dissolved by mutual consent.—London, 23rd December, 1861.

Notice of the application to the Metropolitan Board for a licence to store petroleum, made by Messrs. Humfrey and Youll, of Suffolk-grove, was read by the clerk, and it was understood that the licence had already been twice refused. The board thought fit to hear a report upon the subject before coming to any decision, and the following able report by Mr. Bianchi, the medical officer, was read.

On Friday last, about 40 gentlemen met for dinner in the Buchan Arms Inn here, in order to enjoy the satisfaction of spending few pleasant hours in the company of one whom they all delighted to honour. The guest of the evening was A. Grahame Yoole, Esq., a gentleman of varied and extensive attainments, both in science end art, and also in languages, and who, for many years, has devoted himself the study of the oil trade in its various branches.

Mr Yoole superintended the erection here the Albyn Shale Oil Works, belonging E. W. Fernie, Esq. He has now commenced the erection of similar works on his own account in Fife, the neighbourhood of Anstruther.

Though he came here a stranger, and has not been quite three years among us he has gained golden opinions from all and sundry of all classes of society ; and his friends assembled Friday evening were, one and all, glad the opportunity of manifesting their respect for him, and of unitedly giving expression to their good wishes for himself, his amiable and excellent lady, and numerous and interesting young family.

Though Bacchus might perhaps have complained that the potations were not more deep, the evening was a very pleasant one—toast and reply, song and sentiment following each other in rapid succession, and more than one of our amateur singers possessing abilities that could bring down plaudits even behind the footlights. The only one thing tending to cause an occasional dash of sadness was the consideration that one so dear to all was about depart from amongst us.

Interesting Velocipede Race. —On Monday evening bicycle race—a novel one for the district—took place between two champion riders, Master W. G. Yool, son of A. G. Yool, Esq., and Mr A. D. Hunter, clerk, Kilrenny Oil Works. Both machines were perfect models of their kind - having been made by Mr Thomas Morton, the talented manager of the works, but they differed so far in size that the wheel of Mr Yool's velocipede had a diameter of only of 30 inches, while that of his opponent measured 42. Like gladiators old, or champions the "ring" of the present day, both appeared as if stripped to their shirts, and bestriding their " iron steeds" at a point a little to the west of Airdrie Avenue, they, at the given signal, darted off like Jehu himself along the dusty highway. "Let the last be the merriest run of all," said old Gen. Anstruther of Airdrie, giving directions for his burial in the family aisle in Elie Church, and so this " spurring and sweating" is proverbial still, as they drove the old renegade to his grave. Just such another race along the self-same road went the " whirring" velocipedes as gaping ploughmen stopped their harrows and looked on in wonder, and outrun whipsters drew up with no less amaze, but heedless alike of hillock hollow, the racers dashed on their way, the contest, of course, being all the more intense as the goal was neared. The distance run was fully three miles, and for a time it seemed a neck and neck race, but on approaching the North Toll, Mr Yool drew about yards ahead of his opponent, and so won the race, doing the distance in thirteen minutes and half, or at the remarkably fast rate of speed about thirteen miles an hour.

The Brickwork. -The site of the new brickwork was exposed public auction according to the statute on Saturday, when the ground was taken by A. Graham Yool, Esq., for the stipulated period fifteen years, at the annual rate £40 the imperial acre. The proceedings were altogether formal, but considerable interest was evinced, owing to the well-founded impression that the spirited lessee intends to carry on this new enterprise with characteristic energy and breadth, for which the situation of the works contiguous to the railway station and the neighbourhood of his coalworkings at Kellie , not to speak of the extent and value of the clay deposit on the banks of the Dreel, affords every facility.

THE Trustees of the late William Graham Yooll, Oil and Cement Merchant, &c., who carried on business at Sheriff Brae, Leith, and at Gorgie Station, Edinburgh, under the Firm name of W. GRAHAM YOOLL & CO., hereby give notice that they have sold the Business at Sheriff Brae, Leith, with the goodwill thereof, and the exclusive right to use the Firm name, to Mr. William Smith Forrest, Wholesale Drysalter and Oil Merchant, 34 West Preston Street, Edinburgh, as at the eighth day of March 1913, and that the said Business has been from that date, and will be in future, carried on by the said William Smith Forrest for his own behoof under the name of W. GRAHAM YOOLL & Co. The Trustees of the late Mr. W. Graham Yooll will continue to carry on the Business at Gorgie under the name of THE BUILDERS' SUPPLY COMPANY. Dated at Edinburgh, this eighth day of April 1013. E. E. GRAHAM-YOOLL, AND. NICOLSON, GEO. WINCHESTER, Trustees of the late William Graham Yooll.