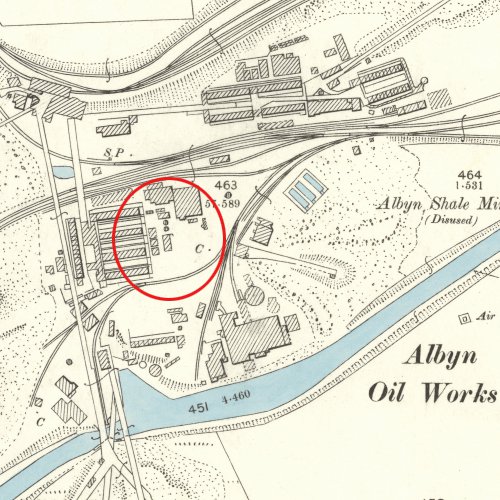 This entry relates to early oil works on the Albyn site. For the works built there subsequently by the Broxburn Oil Company, see Broxburn Oil Works

For more information on the complicated history of Broxburn's early oil works, see this overview

"In this year (1862) Bell sublet a portion of his shale fields to Faulds, under the condition that a stipulated quantity of shale be retorted per annum, and failing that the work be abandoned. Faulds built a work just north of Broxburn village, and set up thirty six horizontal and thirty two vertical retorts, but in a year found his inability to comply with the terms of the lease and had to confiscate his work to Bell, who about 1865 let it to Steel, together with a lease of shale fields, under the same condition that Faulds had it. Steel found his level with Faulds after a very few month's practical work, and therefore the Broxburn Oil Work (under which name the work had gone) again reverted to Bell, who then carried on the crude oil business himself, until he eventually disposed of the work and shalefields to what turned out to be one of the most successful of the Scotch oil companies, namely the Broxburn Oil Company, Limited."

This account is not fully in accord with other evidence, and there remains uncertainty of the precise sequence of use of the Albyn oil works site, which was redeveloped on a number of occasions.

The Albyn site lay on the north bank of the Union Canal, close to bridge 28, and in the days when the railway network was still in development, much of the output of the works will have have transported by canal. An account from 1866 describes how oils from Broxburn were transported by canal to Grangemouth, and from there by lighter to the Forth Bank refinery in Stirling.

The first Albyn oil works were constructed in 1862 by the Broxburn Shale Oil Co. Ltd. , a company headed by Glasgow timber merchant, Robert Faulds. Presumably as a consequence of failing to meet the quota set by Robert Bell, who owned the local mineral rights, the company was wound-up in 1863. Newspaper accounts (below) suggest that the works, then little more than a year old, were dismantled and sold off piecemeal in early 1864.

It seems likely that Ebenezer Waugh Fernie built oil works on the same site late in 1863, or early in 1864. Fernie was a powerful and influential businessman with substantial oil interests in North Wales. In evidence presented during the "Great paraffine case of 1864" (in which James Young taking Fernie to court for infringement of patent), Fernie stated:

"We had for a time 24 vertical retorts (at Saltney, near Chester) similar to those used by Mr. Young. They were erected in 1861, and worked the same as the horizontal retorts, …....They have now gone to Scotland to be used in my works there."

Testimony was also given by A.G. Yool, a chemist who had "lately been engaged by Mr. Fernie, at Broxburn, Near Edinburgh, to fit up works and manufacture oil from shale". It seems that Fernie's works operated for little more than a year, perhaps also having failed to meet a production quota set by Robert Bell.

Redwood indicated that the Albyn site was "let to Steel in 1865". Dr James Steele did operate an oil works in Broxburn that lay on the north side of the Union canal, however this is thought to have been sited a little to the west of the Albyn site. It may have been that Redwood intended to refer to "Fernie" rather than "Steel" in his account.

The Glasgow Oil Co. Ltd. (Broxburn), a company of which Robert Bell was a director, was established in 1866 to take over the Albyn site. As no account is known of the sale of plant from Fernie's works and it may be that this was also taken over by the new company. This substantial enterprise employed 110 men and by 1873, when the company went into liquidation, the works were equipped with 257 horizontal retorts and 36 vertical retorts. Evidence suggests that oil production ceased c.1874 when ownership reverted back to Robert Bell, and that the works lay derelict until the formation of the Broxburn Oil Company Ltd in 1878.

In 1878, Robert Bell's various oil interests in the Broxburn area were sold to the Broxburn Oil Co. Ltd., of which Bell was the first Chairman. It appears that 36 vertical retorts remained at Albyn and we returned to service by the new company. The Albyn site became the location of the company's crude oil works, which were equipped with new Henderson patent retorts. The further history of the site is continued as Broxburn Oil Works. 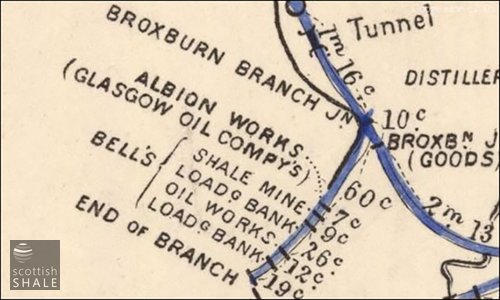 Above right: 25" OS map c.1898. The red circle marks the approximate site of the oil works. 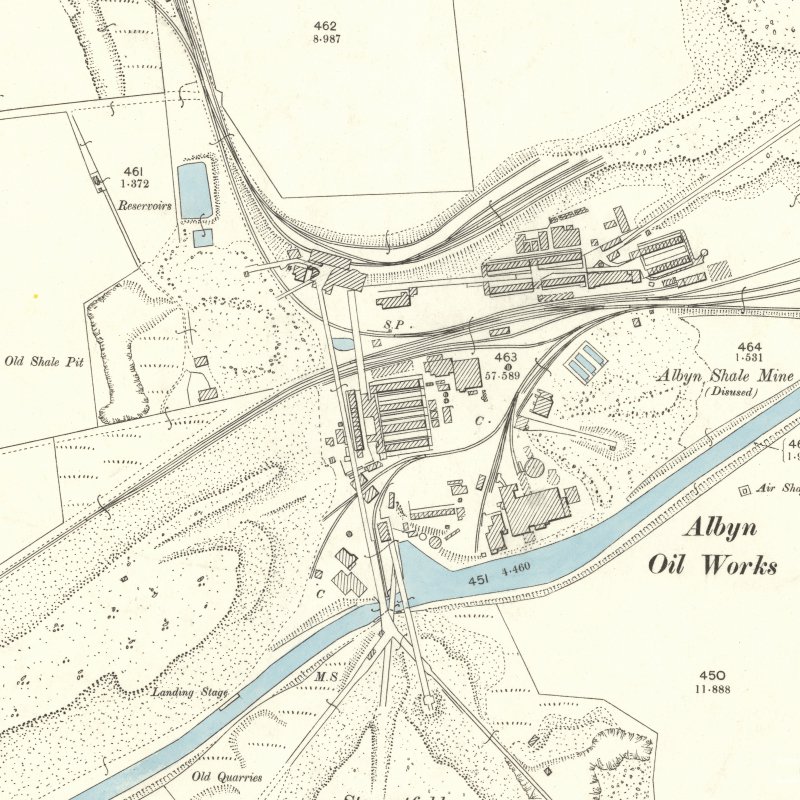 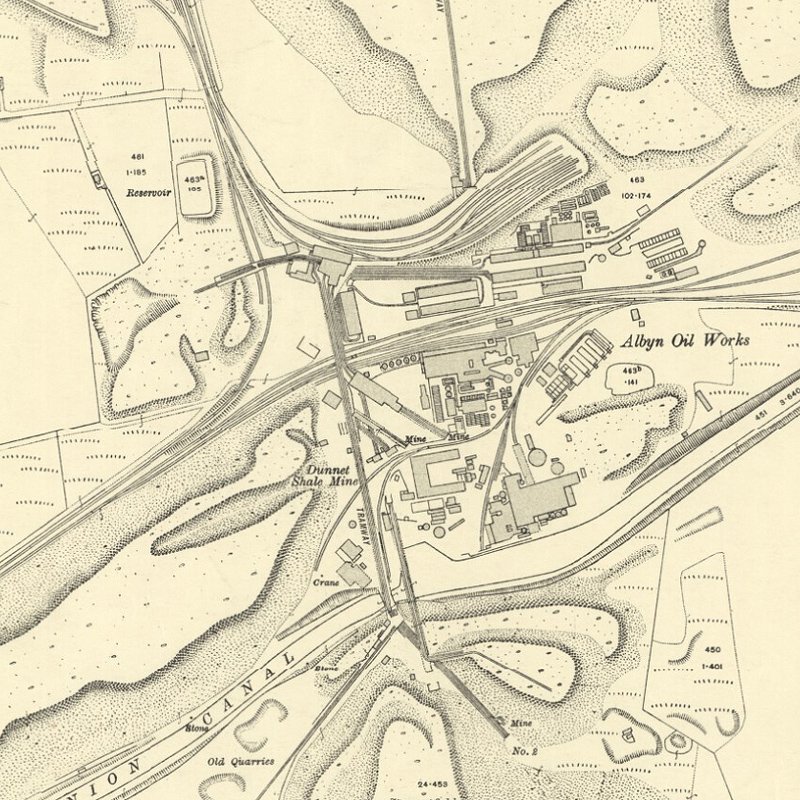 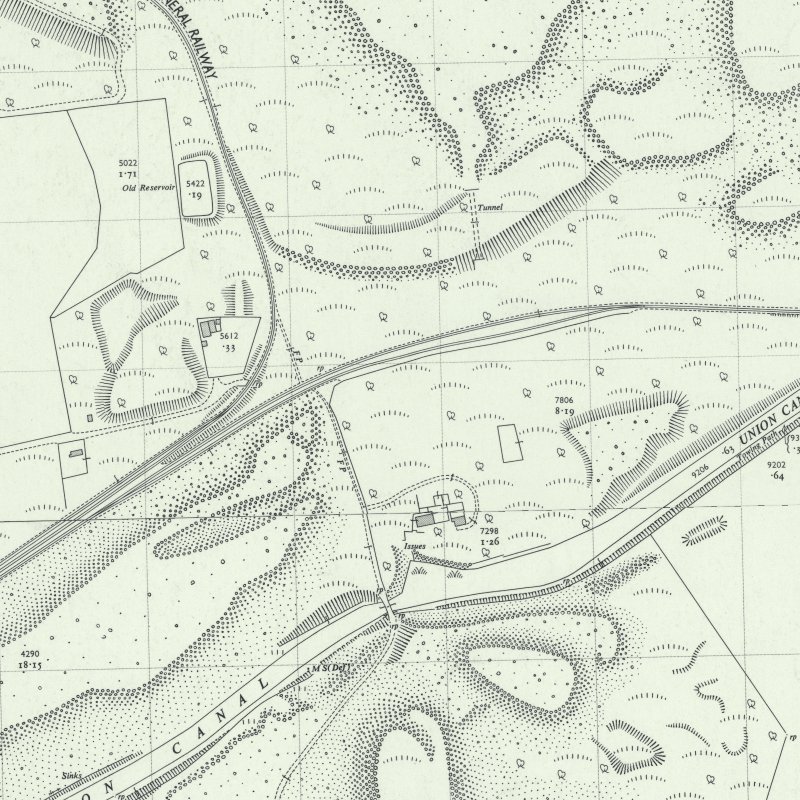 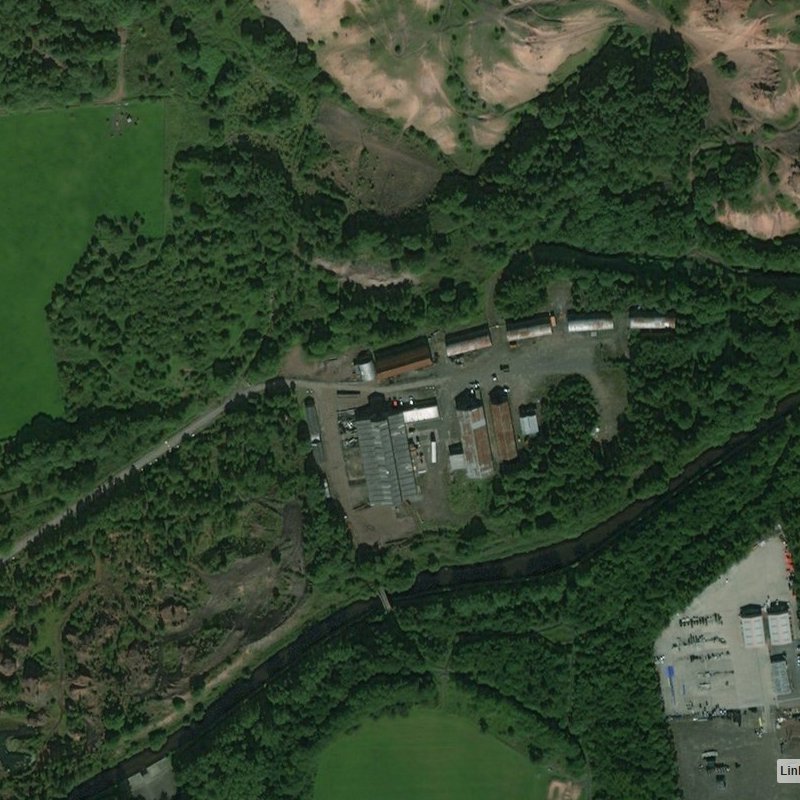 The extensive works that have been erected on the Earl of Buchan's property at Broxburn, by Messrs Faulds & Co., of Glasgow, are now in operation. The mineral is said to be of the very best quality, and in the greatest abundance, and likely to pay highly both his Lordship and the company. The works will be greatly increased shortly. There are two other oil works on the property. The village of Broxburn is fast increasing in size, chiefly from the mineral works and coal pits, and from the many improvements going on over the property.

TO BRICKLAYERS, JOINERS, AND OTHERS. THE Liquidators of the Broxburn Shale Oil Company (Limited) require TENDERS for the TAKING DOWN of the WALLS and ROOFING of the several brick erections including Retorts, Benches, Tanks, &c., at the Company's Works, near Broxburn, and within Ten Miles of Edinburgh. The terms and conditions of Contracts will be learned by applying to Mr. McGregor, at the office of the company, 49 West George St, Glasgow.

TO BE SOLD At the BROXBURN SHALE OIL COMPANY'S WORKS, BROXBURN, About Ten Miles West of EDINBURGH, On TUESDAY, 19th JANUARY 1864. P. BURN & Co. Beg to intimate that they are instructed by the Liquidators of the BROXBURN SHALE OIL COMPANY (LIMITED) TO SELL the Whole MACHINERY, UTENSILS BUILDING MATERIALS, PLANT, &c., belonging to the said company. The Union Canal Bounds the Works on the South, and there is a Wharf and Crane, so that the above Plant, &c. Can be easily removed.

The extensive works of the Broxburn Shale Oil Company, recently erected at a cost of £10,000, were sold in lots on Tuesday. The sale was largely attended, and competition was good; but the price realised was only about one-fourth of the original cost.

Early in 1862, the Broxburn Shale Oil Company (Limited) was formed, which after expending a large sum of money, was wound up in about two years. The whole plant was sold, and Mr. Fernie of the Saltney Oil Works, succeeded the company in the occupation of the ground.

THE UNDERSIGNED is prepared to receive TENDERS for the Works of the above Company, situated near Broxburn, consisting of 257 Horizontal Retorts, 36 Vertical Retorts, One Crude Oil Still, with all the Receivers and Stock Tanks, Steam Engines, Boilers, Winding Gear, Donkey Pumps, Railways, Shale-Breaking Machine and Connections. Tank Boat for the Carriage of Oil by Canal, Plant for the Manufacture of Ammonia, Clay-grinding Mill, with Engine and Boiler attached; Offices, Manager's and Workman's Houses, Workshops, Working Tools &c. – all per specification. A considerable proportion of the Plant has not been long in use. The Work is capable of producing 90,000 Gallons of Crude Oil per Month, with Shale, producing 24 Gallons per Ton, and in excellent working order. The whole will be shown to intending Offerers on their applying to the Manager of the Works. Sealed Tenders to be lodged with the Undersigned, at 48 Dundas Street, Glasgow, on or before the 15th April next. The highest or any Offer may not be accepted. JOHN ANDERSON, Liquidator. Glasgow, 28th March 1873.

Evidence of the Glasgow Oil Company (Limited). Broxburn. Our works are situated on a tributary of the Brox burn. Employ 110 hands. Rateable value of works, £628. The bed of the stream has not silted up. Our works are not affected floods. Obtain supply water partly from springs and from surface drainage, but do not know the annual consumption at our works. Use yearly 42,000 tons of bituminous shale, and 150 tons of sulphuric acid. Produce 1,050,000 gallons of crude shale oil, and 200 tons of sulphate of ammonia. Have no liquid refuse except water from which the ammonia has been extracted, and which is used for raising steam. The whole of the solid refuse produced is conveyed to a rubbish heap. Use steam as power. Consume yearly 13,000 tons of coal, the ashes from which are removed to a rubbish heap. The excrements of our workpeople are removed by farmers and used for manure. Have no suggestions to offer as to the best means of avoiding pollution in future, or to the conservancy of rivers and streams.

Evidence of Robert Bell, Paraffin Oil Manufacturer, Broxburn, Linlithgowshire. My works are situated on an affluent of the Almond. Employ 340 hands. Rateable value of works £510; and of minerals, £1644 13s 11d. The bed of the stream is not silted up. My works are not affected by floods. Obtain supply of water jointly from mines and canal, but am not able to state the annual consumption at my works. Use yearly, bituminous shale, 70,000 tons; sulphuric acid, 260 tons; caustic soda or other alkali, 20 tons. Produce crude paraffin, 460,000 gallons; illuminating oil, 250,000 gallons; sulphate of ammonia, 60 tons; paraffin scale, 80 tons; blue oil, 130 tons. I am not able to give the volume of the condensed water separated from tar after removal of naphtha, or spent sulphuric acid after first purifying process, or spent caustic soda and tarry matter after second purifying process. These waste liquids are put on to a burning spent shale heap and consumed there. The whole of the premises use steam, 117 nominal horse-power. Consume yearly 10,000 tons of coal, the ashes from which are used to repair roads, and the remainder put on to the spent shale heap. The excrements of my workpeople are used as manure on our farm. Have no suggestions to offer.

Mr. Faulds, in company with some others, erected a small work in 1862, just north of Canal-Bridge No. 28, and set up 36 horizontal retorts, but they abandoned the works shortly afterwards because the price of crude oil fell below a shilling per gallon. Mr. Fernie then took up the works in 1864, added 32 vertical retorts, and abandoned them in 1866; they were restarted, however, shortly after by a firm known as the " Glasgow Oil Company ".

Primrose, Strathbrock or The history and antiquities of the Parish of Uphall, 1898