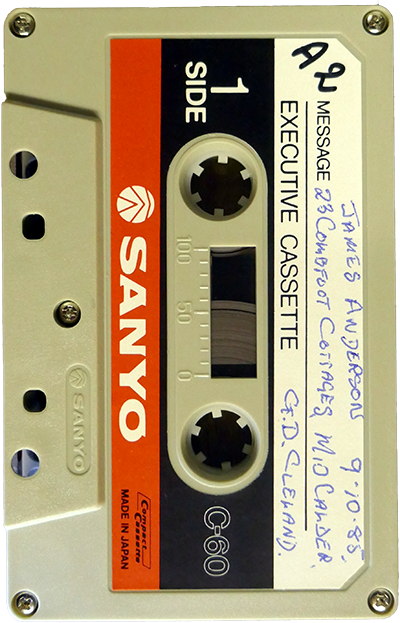 The sharp increase in oil prices during the 1970's prompted a review of shale oil reserves in many parts of the world. In the USA, plans to exploit shale in Colorado prompted the US Department of Energy to commission a programme of research into the possible health consequences of the planned new industry.

The Institute of Occupational Medicine, based in Edinburgh, was commissioned to undertake a programme of research looking at parallels between the Scottish industry and that planned for the USA, and considering factors that might affect the health of the workforce and local population. The work included analysis of health records and a programme of interviews with retired shale workers and their families that aimed to identify any common factors in working or home life that might increase the risk of illness.

Dr. Sara Randall's paper "A socio-historical study of Scottish shale mining communities in Mid and West Lothian" was published in 1990 and concluded:

"Comparisons with contemporary studies show that, although the shale communities were poor with bad living conditions compared with today, there is no evidence that they were any worse off than contemporary working class communities, and thus no reason to expect that overall mortality levels should be raised."

Dr. Randall's paper, and all other reports in this study, are available on-line from the Institute of Occupational Medicine library. The original cassette recordings of these interviews, and their transcripts, were subsequently deposited in our museum.

The study, and Sara Randall's thorough and sensitively conducted interviews, provide a unique record of working and home life, and of the interests and attitudes of the day. The interviews are personal accounts and sometimes touch on sensitive and intimate issues. Except for a few interviewees marked as anonymous, all agreed at the time to be identified in subsequent publications; however in 1983, when most of the interview were conducted, few could have conceived that their words would be shared on-line throughout the world. We feel that there is great value in retaining the identity of those interviewed and those referred to in the interviews, however if any direct relative of an interviewee is concerned on this point, we ask that they contact us so we might consider measures to obscure identities.

In addition to those interviewed as part of the IOM study, our collection included various oral history recordings conducted in the late 1980's by the Livingston Oil Museum project.

The names link to the appropriate file records, where the "view file" links to a pdf file containing a transcription and index.

An Electrician from Polbeth who was employed by Scottish Oils Ltd at various oil works and mines as work required. Lived in Mossend.

From Dalmeny, Mr W was a Shale Miner's Drawer at Duddingston No. 1 & 2 Mines.

A Pony Driver, Shale Miner's Drawer, Pit Sinker, Oversman, Fireman then Under-manager, from West Calder, who worked at Polbeth No. 26 Mine, Burngrange No 1 & 2 Pits and Fraser Pit.

A Drawer and Shale Miner at Newliston No. 29 Mine, Dunnet (Sandhole) Mines, Roman Camp Mines, Philpstoun No. 6 Mine and Hopetoun No. 35 Pit (Threemiletown).

A Shale Miner's Drawer and Checkweighman at Hopetoun No. 35 Pit (Threemiletown). Lived in Bridgend.

Mr Black was a Drawer and Shale Miner at Stewartfield No. 1 Mine and Hopetoun No. 4 Mine. Lived in Broxburn.

A Drawer and Shale Miner at Roman Camp No. 6 Mine and Westwood No. 1 & 2 Pit. Lived in Roman Camp.

A Carter at Addiewell Chemical Works. Lived in Burngrange Cottages.

Mr Cameron was an Engineer at Dalmeny Oil Works and lived in Dalmeny since his birth.

An Oncost Worker and Drawer at Baads No. 42 Coal Mine. Lived in Burngrange and West Calder.

Widow of John Lightbody, one of the Shale Miners who died in the Burngrange Disaster at Burngrange No 1 & 2 Pits. Lived in Cobbinshaw and West Calder.

A Pit Bottomer, Shale Miner's Drawer and Shale Miner at Hopetoun No. 35 Pit (Threemiletown) and Philpstoun (Whitequarries) No. 6 Mine. Lived in Uphall.

A Pony Driver at Baads No. 42 Coal Mine and Shale Miner's Drawer at Gavieside No. 40 Mine and Burngrange No 1 & 2 Pits, Tip Labourer at Westwood Crude Oil Works. Lived in Mossend and Polbeth.

A Pithead Worker, Pit Bottomer and Shale Miner's Drawer at Burngrange No. 1 & 2 Pits, Hermand Mine and Westwood No. 1 & 2 Pits. Lived in Polbeth and Livingston Station.

Worked in the Cooperage, Time Office and Filling Station then as a Labourer at Pumpherston Refinery.

A Labourer in the Sulphate House, Retort Worker and Retort Charger at Niddry Castle Crude Oil Works. Lived in Winchburgh.

A Retort Worker, Labourer on the sulphate of ammonia plant and Hammersman at Oakbank Paraffin Oil Works. Lived in Oakbank.

A Shale Miner's Drawer, Faceman and Repairer at Duddingston No. 1 & 2 Mines and Duddingston No. 3 Mine and Philpstoun (Whitequarries) No. 1 Mine. Lived in Niddry Rows and Winchburgh.

A Pit Bottomer and Shale Miner's Drawer at Westwood No. 1 & 2 Pit then worked at Pumpherston Refinery. Lived in Dedridge.

A Bag Boy, Message Boy and Office Worker at Pumpherston Oil Works / Refinery and Westwood No.1 & 2 Pits. Lived in Pumpherston.

An Engineer at Roman Camp Crude Oil Works, Broxburn Oil Works, Pumpherston Oil Works / Refinery and Addiewell Chemical Works. An Undermanager at Grangemouth Refinery. Lived in Faucheldean, Winchburgh and Roman Camp and talks about the houses he lived in there.

A Hammersman, Apprentice Joiner and Shunter at Oakbank Oil Works then worked as a Shunter at Pumpherston Oil Works. Lived in Oakbank and Pumpherston.

A Drawer at Ingliston Pit and Totleywells No. 1 mine. Lived in Edinburgh, then Broxburn.

Talks about domestic life and houses in Addiewell. Mentions Loganlea Pit, Addiewell Oil Works, Philpstoun Oil Works and Stoneyburn. Also talks about the gala days and the types of work women did.

A Candle Maker at Broxburn Oil Works. Talks about women working in the candle works and the houses and living conditions in Broxburn.

A Pithead Worker, Chain Runner, Drawer and Labouring Squad at Duddingston Mine. They talk about domestic life, living conditions and gala days of Dalmeny.

A Bag Boy and Chain Runner at Glen Devon Mine (Hopetoun No. 6 Mine) then as a Drawer at Tottlywells and Whitequarries (Philpstoun No. 1 Mine). Talks about recreation and living in Millgate and Broxburn.

A Pony Driver at Breich No. 1 & 2 Pit, Gavieside No. 40 Mine, Baads No. 42 Coal Mine and Polbeth No. 26 Mine. Then worked as a Mine Foreman at Waikato Coal Mine in New Zealand, Fireman in Upper Newcastle, NSW, Australia, Sinker, Pithead Worker, Shaftsman, Pit Bottomer and Shiftman at Burngrange.

A Pony Driver at Polbeth No. 26 Mine then Drawer at Baads No. 42 Coal Mine and Burngrange and also a Fireman at Burngrange. Lived in West Calder.

A Drawer at Roman Camps No. 6 Mine then as a Diesel Filtration Operator and Cleaner in Pumpherston Oil Works / Refinery. Talks about various accidents in the pits.

A Bank and Accountant at West Calder, Edinburgh and Dalkieth working for the City of Glasgow Bank, which then became the Commercial Bank, then the National Commercial Bank and finally the Royal Bank. Talks about social life and living conditions in Gavieside and West Calder and that his grandfather was a Candlemaker at Addiewell Chemical Works.

An Assistant Grocer at Broxburn Cooperative then Apprentice Joiner for Scottish Oils and worked at Broxburn Acidworks. Then worked at Whitequarries, Roman Camp No. 6 Mine, Roman Camp Oilworks and Oakbank as a Joiner.

A Chainrunner at Westwood No. 1 & 2 Pit, then as a Drawer. Lived in Dedridge.

A Greaser at Addiewell Oil Works then a Sandboy, a Labourer and Platelayer. Then worked as a Breaker and Nightwatchman at Westwood. Lived in Addiewell and talks about houses and living conditions.

A Labourer, Blacksmith's Labourer, Ostler and Surface Foreman at Tottlywells No. 1 Mine and Duddingston Mines.

Worked in service as a Maid. Lived in Broxburn and talks about the houses and living conditions. Both father and husband worked in the shale industry.

A Drawer and Faceman at Philpstoun Mine. Talks about the accident that caused the death of his brother and dicusses the works of a Faceman in great detail. His grandfather was the General Manager at Pumpherston Oil Company. Also talks about recreation at the Philpstoun Reading Room. Lived in Philpstoun.

A Sulphate House Worker at Deans Crude Oil Works, then a Stillman and Fire Deputy before becoming Foreman. Moved to Westwood and worked cleaning the boilers. Lived in both Dechmont and Livingston Station. Talks about working during the blackouts in WWI.

A Pithead Runner and Drawer at Roman Camp and Duddingston Mines. Lived in Winchburgh

Mr Paterson: An Apprentice Plumber and Tank Filler at Philpstoun Oil Works, then as a Pony Driver at Whitequarries. Reopened Faucheldean and worked as a Pumper and then a Drawer. He then left the shale mines and went to work as a Maintenance Engineer at Pumpherston Oil Works. Mrs Paterson: Worked as a Housemaid until she married. They lived in Queensferry, Newton and Dalmeny.

A Chainrunner at Westwood Pits. Talks about playing football and other hobbies that he had.

Lived in Livingston Station and learned play the piano which she used to play for the wounded soldiers at Bangour Hospital. Her father was a miner at Pumpherston and her grandfather worked in Oakbank Paraffin Oil Works. Talks about women in the Labour Party, Parish money, and living in Livingston Station especially during the World Wars.

A Stillman at Oakbank Paraffin Oil Works, then moved on to working on the retorts and talks in great details about this, before becoming Shift Foreman. Also worked at Hopetoun Oil Works, Addiewell Chemical Works and Roman Camp Oil Works.

Mr Reid: A Stillman, Retort Worker and then Manager at Hopetoun Oil Works. Mrs Reid: A Sulphate House Worker where she sewed up the bags. She was the only woman working there and stopped when she got married. They lived in Oakbank and Broxburn.

Worked in Duddingston Mine and Oakbank Oil Works. Lived in Broxburn and talks about the houses and living conditions.

A Pony Driver, Drawer and Faceman at Newliston, Kirkland and Fauchledean Mine. A Faceman at Whitequarries Mine and then Oncost. Talks bout Unions and football teams.