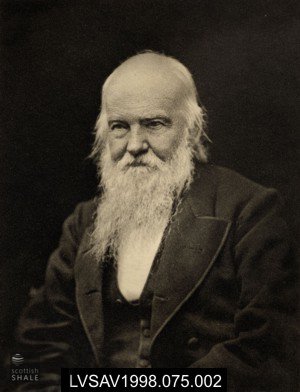 James “Paraffin” Young was one of Victorian Scotland's great heroes and is the name most people associate with the shale oil industry. In 1850 his Bathgate Chemical Works was arguably the first in the world to refine mineral oil on a commercial scale. Young's success sparked a rash of short-lived coal oil works throughout the Scottish coalfields and, more significantly, laid the foundations for a Scottish oil industry that operated for over a century based on the oil shales of East Central Scotland.

Death of Dr Young, of Kelly

We record with regret this morning the death of Dr James Young, of Kelly, which took place at his residence at Wemyss Bay on the evening of Sunday. Dr Young, who was in his seventy-second year, has been in failing health for some time past, and latterly he has been attended by Dr Christie, of Glasgow, in consultation with professors Gairdner, McCall Anderson, and McKendrick. He has been confined to the house since the New Year, but no special anxiety was entertained regarding his condition till towards the end of January. During the fine weather which prevailed about the close of February and the beginning of March he regained strength, and hopes were cherished that he might recover. Symptoms of a more serious nature subsequently supervened, and death has been anticipated for some weeks past. He suffered from general debility rather than actual disease, and he retained full possession of his mental faculties until within a few hours of the end.

By the death of Dr Young a remarkable career has closed, and Glasgow has lost one of the most eminent and widely-known of her citizens. Born in the humblest circumstances, he attained to the possession of princely wealth, and by his inventive genius he not only enriched himself, but has conferred lasting benefits on mankind. He was the son of a working cabinet maker who lived in the Drygate of Glasgow in the year 1811; and having obtained the rudiments of education he was apprenticed to his father, who at this time was established in business in a shop still in existence at 91 Kirk Street, Calton. While thus employed he began to attend classes at Anderson’s College, with the view of satisfying his growing thirst for knowledge. One of his favourite studies was chemistry, and he specially attracted the attention of Professor Graham, subsequently Master of the Mint, then in the Chair of Chemistry, who found him useful in making for him pieces of apparatus, and in assisting in his class experiments. Ultimately he relinquished his trade of cabinetmaker, and was installed in a subordinate capacity in the university where he remained for seven years, acting latterly as assistant to Professor Graham, and occasionally lecturing in his absence. On Graham's removal to University College, London, Young accompanied him, and was again associated with him in his work, continuing the while to extend his own acquirements, and to cultivate his taste for original investigation and research. After remaining for about four and a half years in London, he was appointed, on the recommendation of Professor Graham, to a responsible position in the works of Messrs Muspratt, at St Helens, near Liverpool.

Subsequently, about the year 1843, he removed to Manchester, where he was employed in the works of Messrs Charles Tennant & Co., a branch of the Glasgow establishment. While he lived in Manchester, Mr, now Sir, Lyon Playfair, MP., whose acquaintance he had made at Anderson’s College, brought under his notice the fact that there was oil flowing from a pit at Alfreton, in Derbyshire, belonging to Mr Oakes, Playfair's brother-in-law, and asked whether any use could be made of it. The question was one precisely of the kind to fire the inquiring spirit of Dr Young, for in all his labours he ever worked towards some substantial practical result. He accordingly went and examined the oil spring, submitting the oil to an exhaustive series of experiments, with the result that in the year 1848 he along with Mr Meldrum, who had been his assistant in Manchester, established works for the purpose of preparing the product for the market. It consisted of a thick lubricating oil, and a lighter oil for burning purposes, and soon commanded a ready sale.

But the petroleum spring, like some of the “gushers” in America, of which in these later times so much has been heard, speedily became exhausted, and the experiment threatened to end in disappointment and failure. About this time the Torbanehill mineral ,of which so much was subsequently heard in connection with the action against the lesee, had begun to be used for gasmaking. Mr Hugh Bartholomew, who was then manager of the City and Suburban Gas Company, finding that it was too rich for the purpose for which he required it, brought it under the notice of his friend Dr Young, suggesting that it might by a process of distillation be converted into paraffin oil. Dr Young had previously been experimenting on the subject, and succeeded by distilling the mineral at a low temperature in producing a considerable quantity of crude paraffin. He at once saw that here he had found the substitute for his petroleum spring of which he had been in search.

Having secured the patent rights of his invention he then proceeded, in conjunction with Mr Binney of Manchester and Mr Meldrum, to erect works at Bathgate, in the centre of the Torbanehill field, for the purpose of extracting the oil from the mineral; and here in the year 1851 was laid the foundation of his own fortune, and of what has now become an extensive and lucrative industry. Very soon the works at Bathgate were found inadequate to supply growing demand for the products of the hitherto valueless shale, and a larger and more complete establishment was erected at Addiewell, near West Calder, where a deposit of shale had been found. But Dr Young's success in experimenting with shale did not end in the production of lubricating and burning oils, for, while it cannot be claimed for him that he was the discoverer of paraffin, we believe it is not disputed that he was the first to produce those beautiful candles which are now manufactured in hundreds of thousands, and practically monopolise the field. 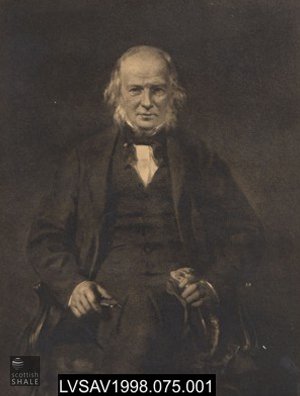 He also devoted his attention to the construction of lamps in which the oil produced at his works could be consumed, thus leading the way in what has now become another important department of industry. In the year 1866, shortly after the expiry of his patent rights, Dr Young sold his whole works at Addiewell and Bathgate to a limited liability company for about £400,000. He retained a large holding in the concern, and continued to act on the board of directors, but about ten years ago he resigned, and has never since taken any interest in the business. As showing the extent of the industry created by Dr Young, it may be mentioned that when the works at Bathgate and Addiewell were transferred to the limited company the total production of mineral oil in Scotland amounted to over six and a quarter million gallons a year. It is now over fifteen million gallons, of which Young's Company produces fully one-third, and there are in addition residuary products of nearly equal value.

Dr Young's name will be chiefly associated with the discovery of the method of distilling oil from shale; but he was also the author of other useful inventions. When he worked in the laboratory of Professor Graham the making of other useful inventions. When he worked in the laboratory of Professer Graham the making of caustic soda was a delicate operation conducted on a small scale in silver vessels. Dr Young discovered a method of making it in iron vessels, and it is now one of the chief operations in alkali works. The manufacture of chlorate of potash is also a large and growing industry. Dr Young invented and carried into effect the method still in use in its production. He was also the first to suggest the application of caustic lime to prevent the corrosion in the hulls of iron ships, the course followed, we believe, in the Royal Navy. All these inventions belong to the period of his earlier life; but even in his later years he continued his favourite study, and within the past year he has had several new patents registered. One of the subjects to which he latterly directed his attention was the recovery of ammonia from sewage. In the laboratory fitted up at his residence at Wemyss Bay, with the aid of two assistants, he conducted an elaborate series of experiments on the subject; and so satisfied was he of the success of the process he was following that he had it patented. Experts who have seen it speak favourably of the result, though it is considered doubtful whether it can ever be brought into practical operation on account of the expense involved. Dr Young was also much interested in the subject of electric lighting, and tried many experiments with the view to its practical application for ordinary purposes.

From his early connection with Anderson College, Dr Young was led to take a special interest in the institution, and spent a great deal of time in promoting its interests. From 1870 till 1877 he was chairman of the trustees, and after his retirement he gave a donation of £10,500 for the foundation of the Young Chair of Technical Chemistry. He testified the respect he entertained for his friend Professor Graham by erecting at his own expense the statue to the Master of the Mint which occupies a prominent position in George Square, and many of his acquaintances in early days received substantial proofs of his friendship. He was closely associated with Dr Livingstone all through his life, and supported and encouraged him in his self-sacrificing labours in connection with the exploration of Africa. Before leaving on his final expedition Dr Livingstone placed his family under the care of Dr Young, and how faithfully he justified the trust reposed in him is well known. After the return of Mr Stanley when the celebrated traveller was lost in the “dark Continent”, he fitted out at his own expense the expedition which succeeded in recovering his body. He was one of the trustees of Livingstone, and we believe he received the original manuscript of his travels in Africa.

Dr Young was a fellow of the Royal Society, and received the honorary degree of LLD from St Andrew's University. Besides the estate of Kelly, where he principally resided, Dr Young also owned the estate of Durris, in Aberdeenshire, as well as the lands of Limefield and several other properties in the neighbourhood of West Calder. He is survived by three sons and four daughters, three of the latter and one of the former being married. Mrs Young died some years ago.

An interesting ceremony took place in the Technical College, Glasgow, on Monday afternoon. In presence of the governors and an invited company of ladies and gentlemen a marble bust was unveiled of the late Dr James Young of Kelly and Durris, who was so long intimately associated with the college. The bust, which is the work of Mr Kellock Brown, sculptor, Glasgow, and is the gift of Mrs Walker of Limefield, West Calder, a daughter of Dr Young is place in the Technical Chemistry Department.