A substantial industrial complex, in its time one of the largest chemical works in Scotland. Redwood notes:

"The year 1863 brought forth... the Addiewell Works. The fast approaching exhaustion of the Boghead Coal Mines about the year 1859 – 60, caused Young to look around elsewhere for a new supply of oil-yielding material. As burning oil was at that time in greater demand than lubricating oils or even wax, and as the Addiewell shales were known to yielded a larger percentage of burning oils than any other shales, Young took a lease of those shale-fields and concluded to build a new works in their vicinity. The corner stone of the oil refinery was laid by Young's intimate friend, Dr. Livingstone (the noted African explorer), and the works were completed about the latter end of 1865... ".

There are many excellent contemporary descriptions of the works, including accounts from 1865, and 1872.

Addiewell remained the centre of operations for Young's Paraffin Light and Mineral Oil Co. Ltd, but as local supplies of shale became exhausted, activities were increasingly focussed on shale-fields to the east at Hopetoun, Newliston and Ingliston whose output was retorted at Hopetoun or Uphall oil works. 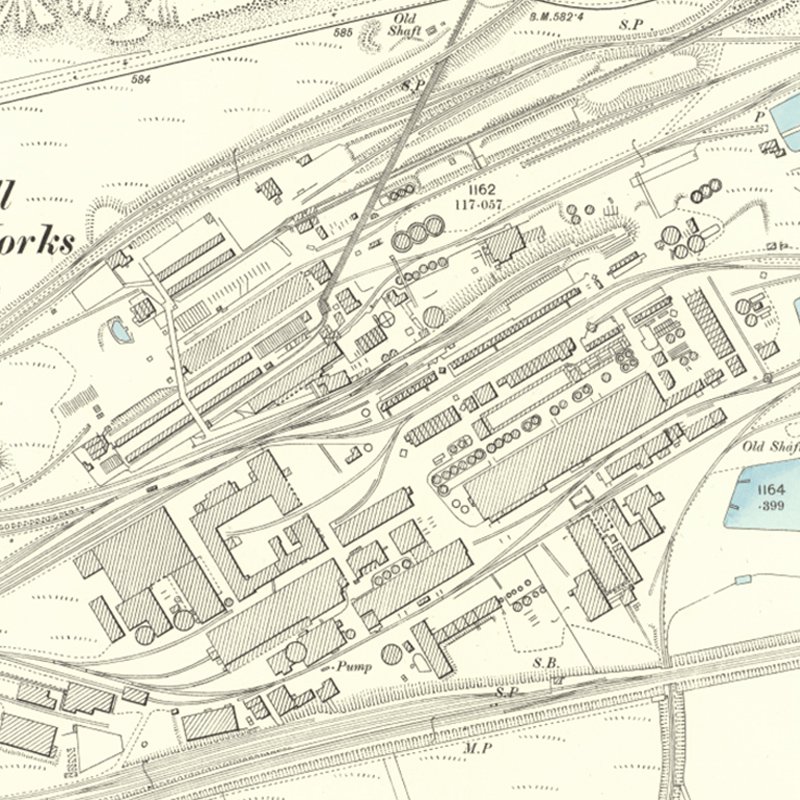 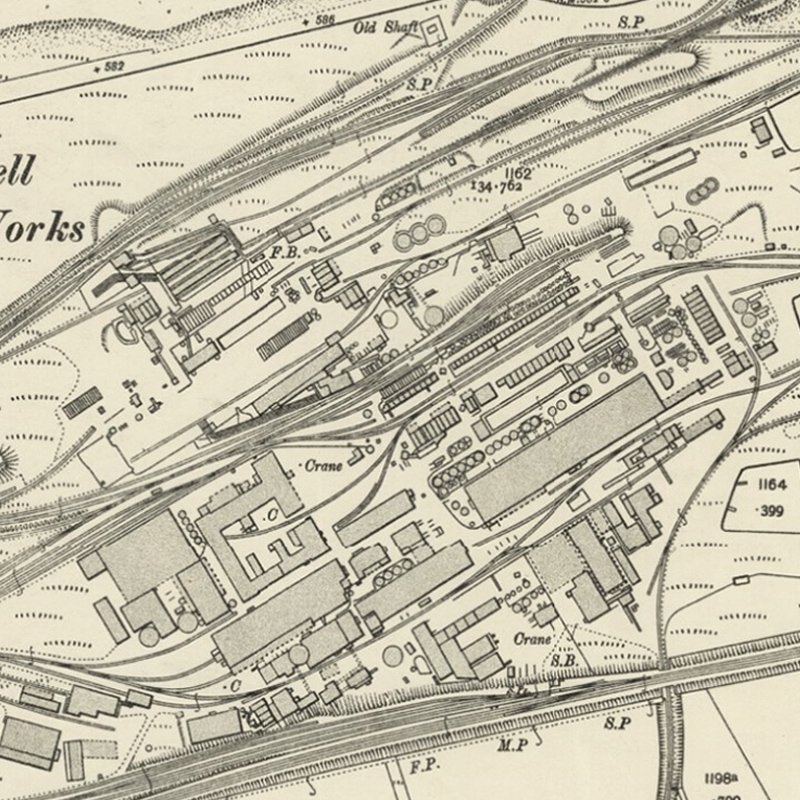 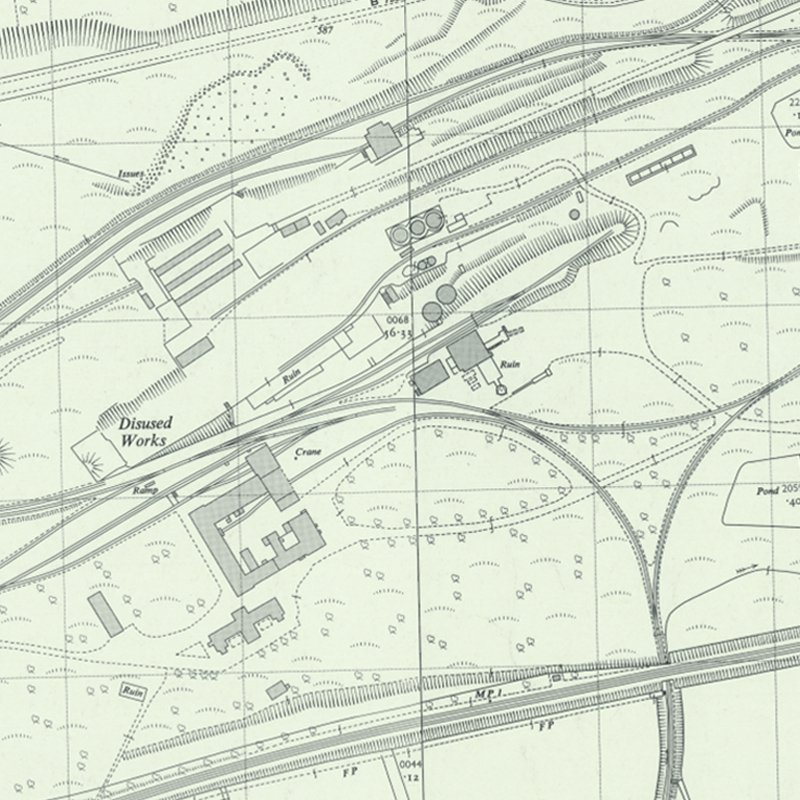 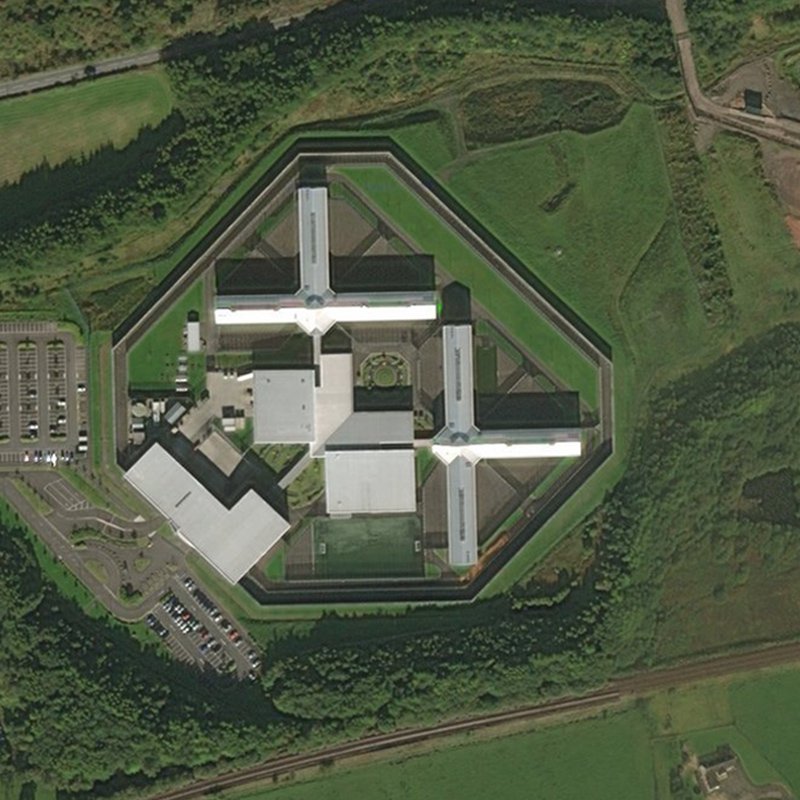 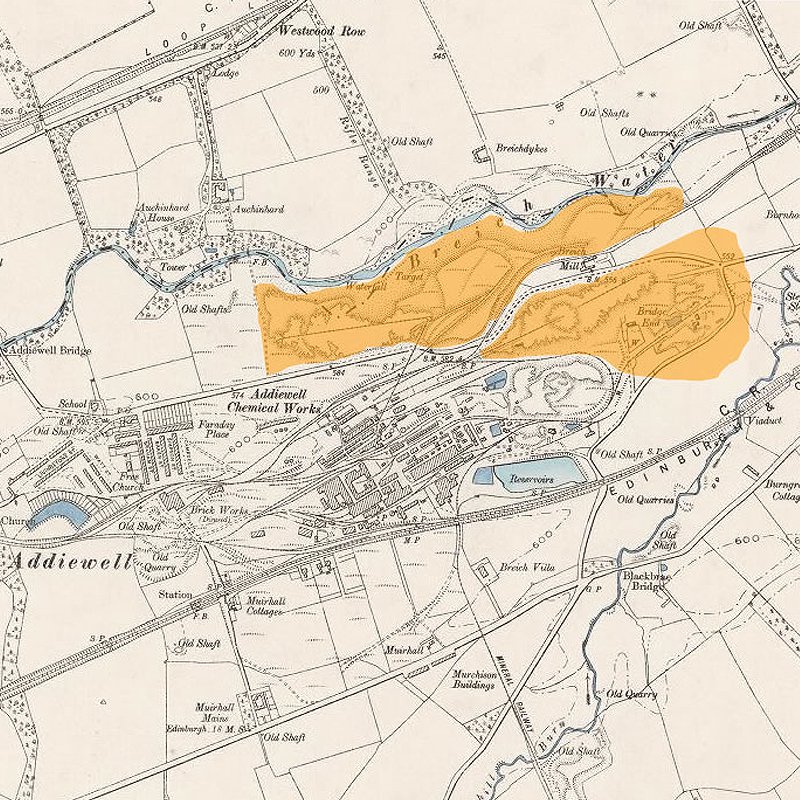 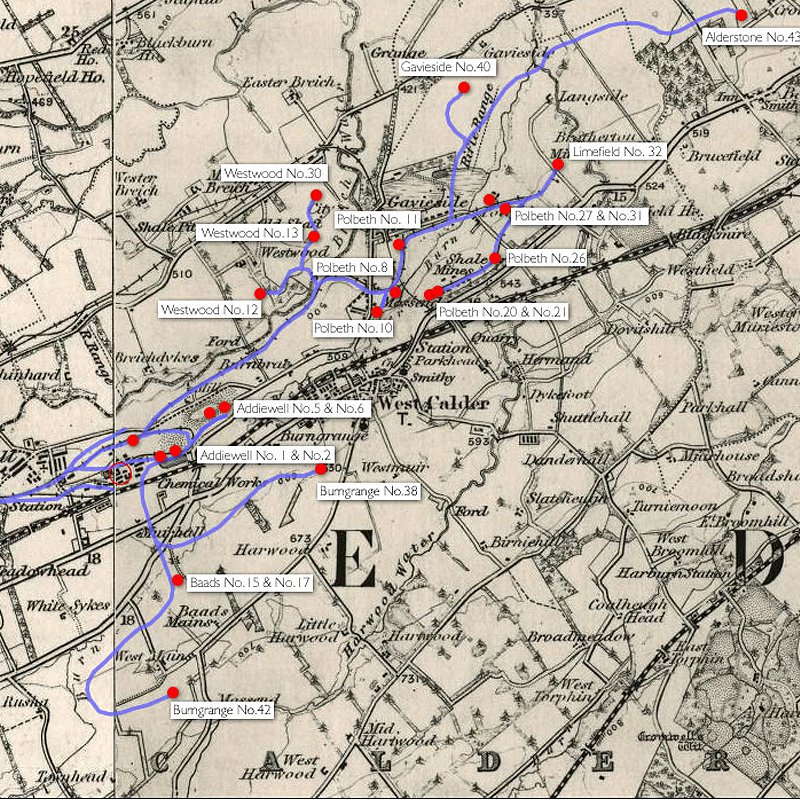 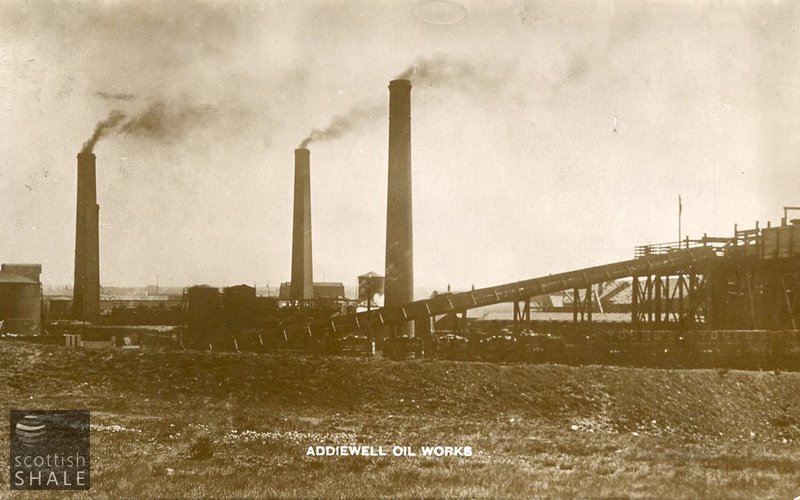 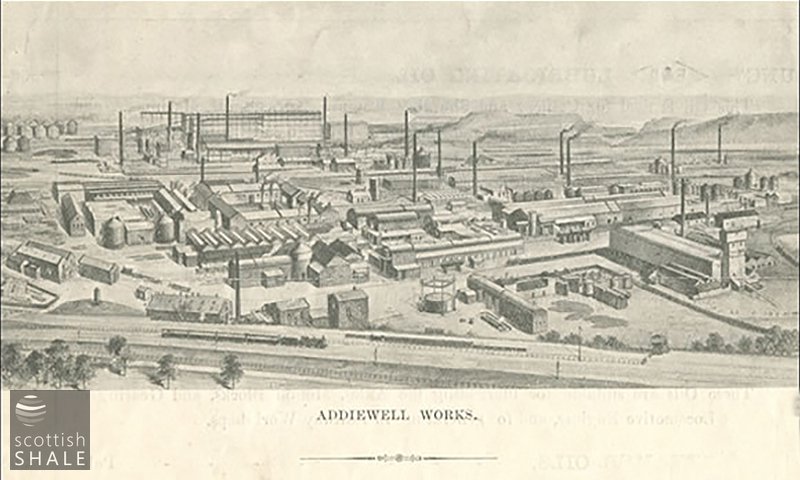 General idealised view of the works from the south. 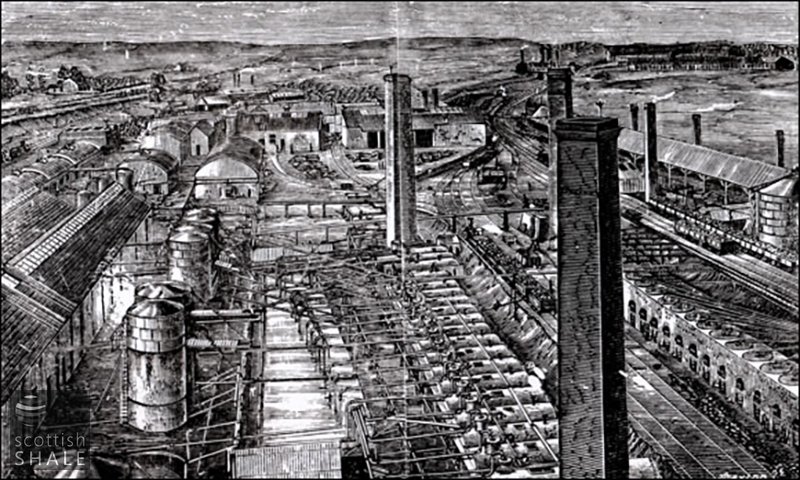 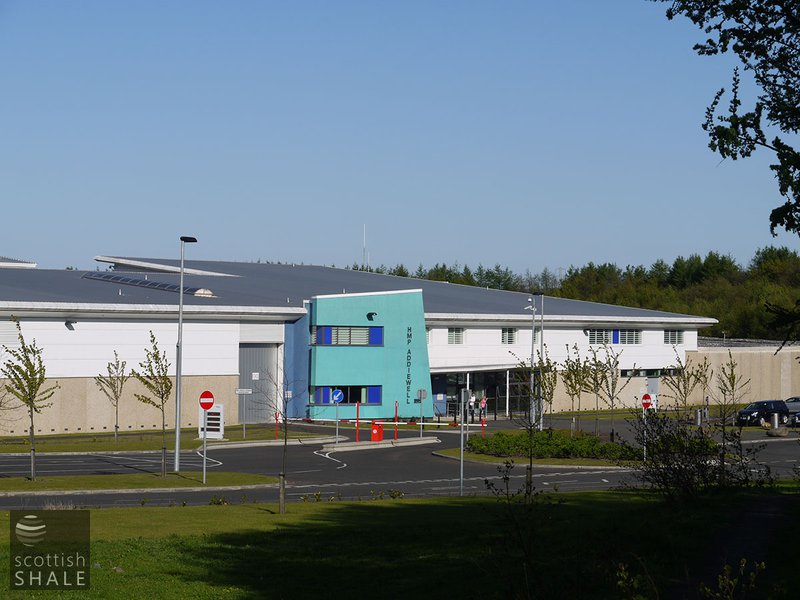 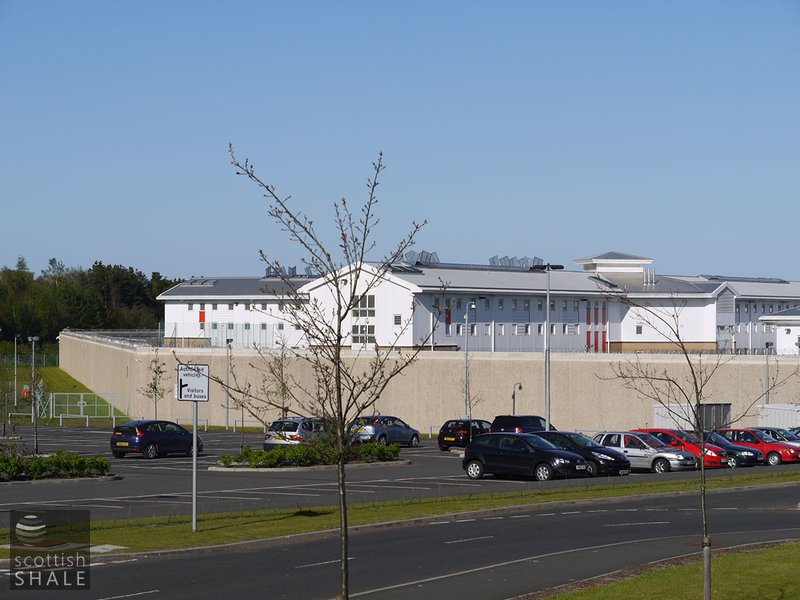 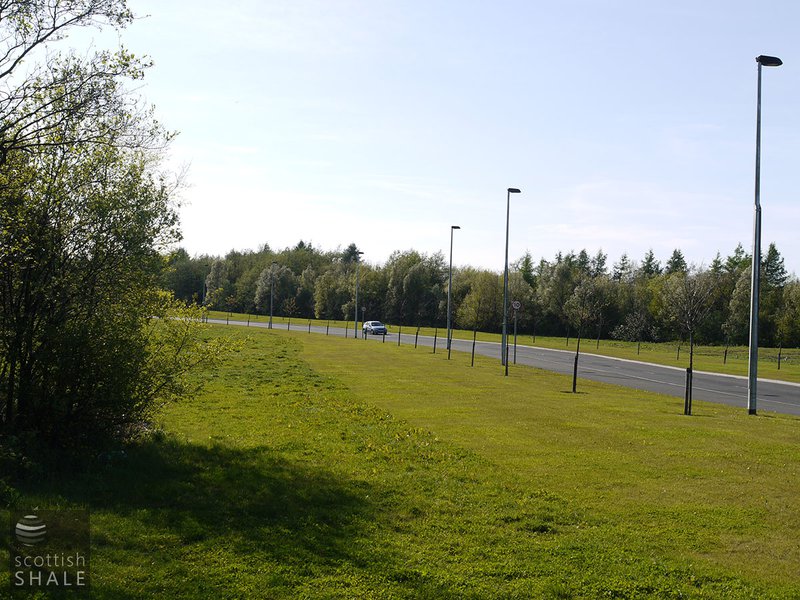 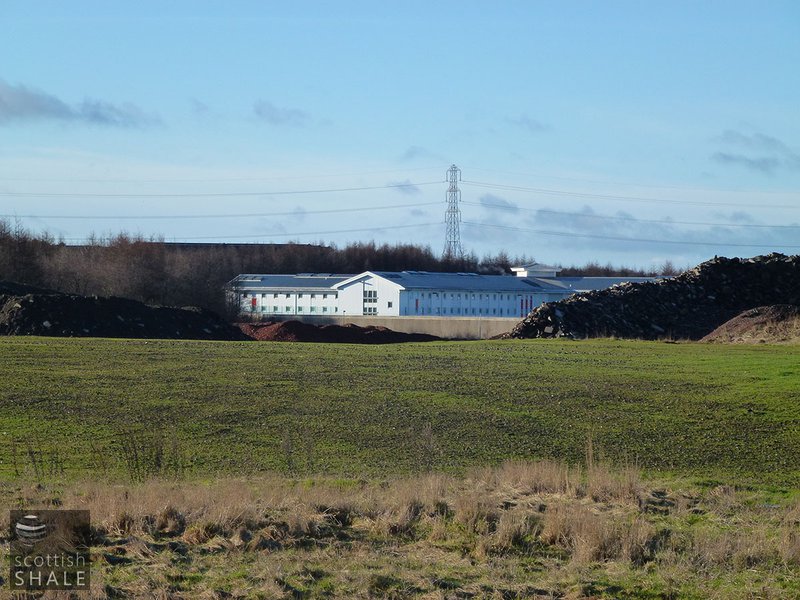 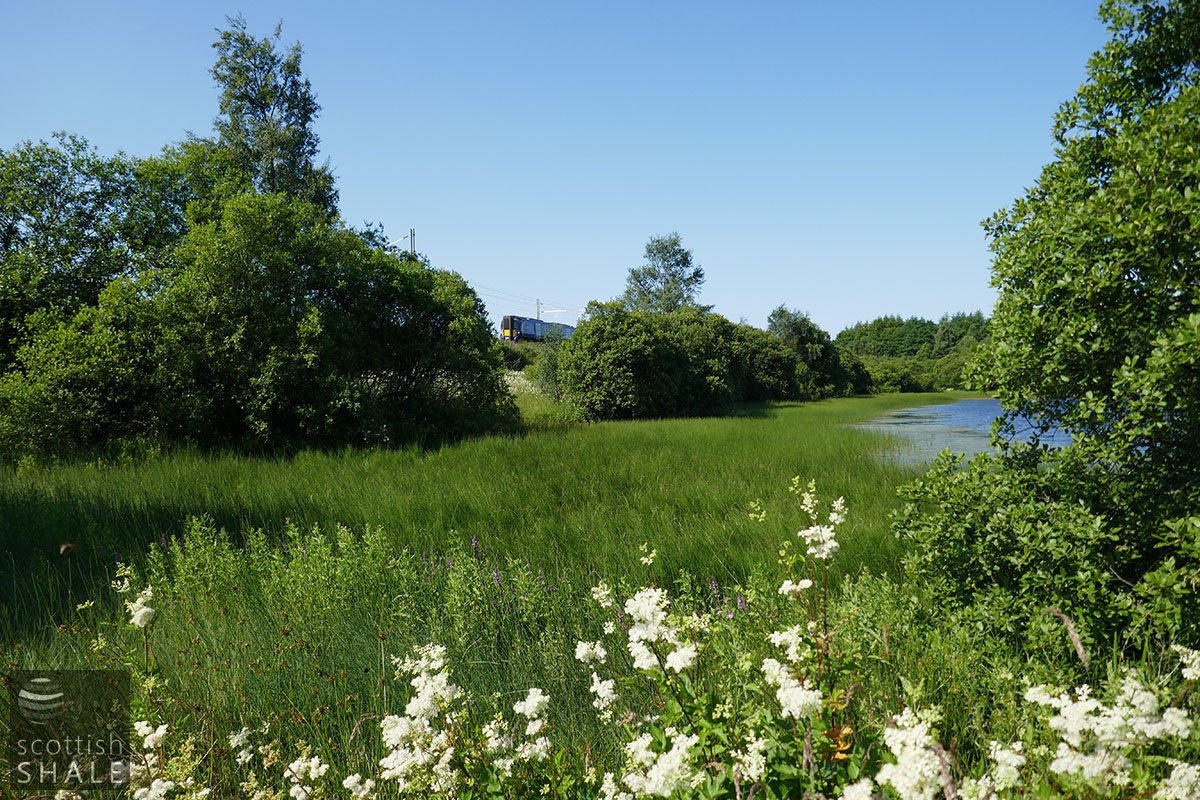 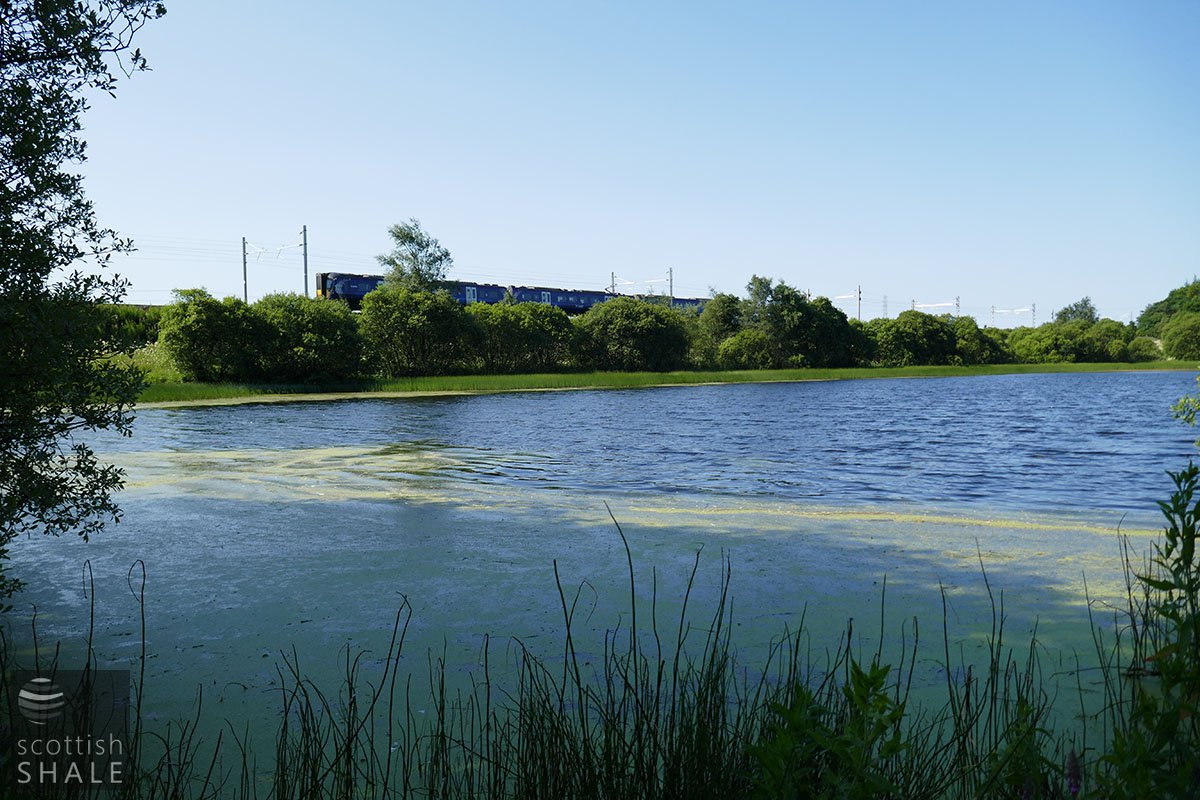 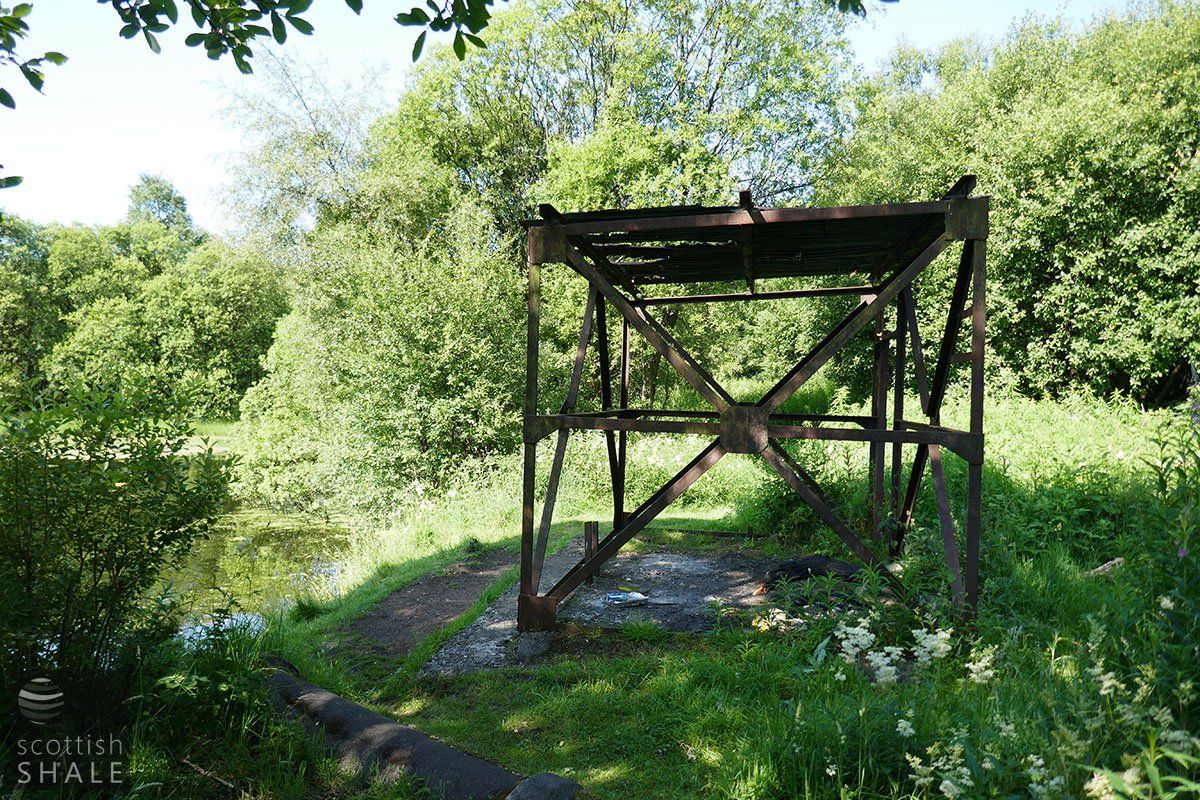 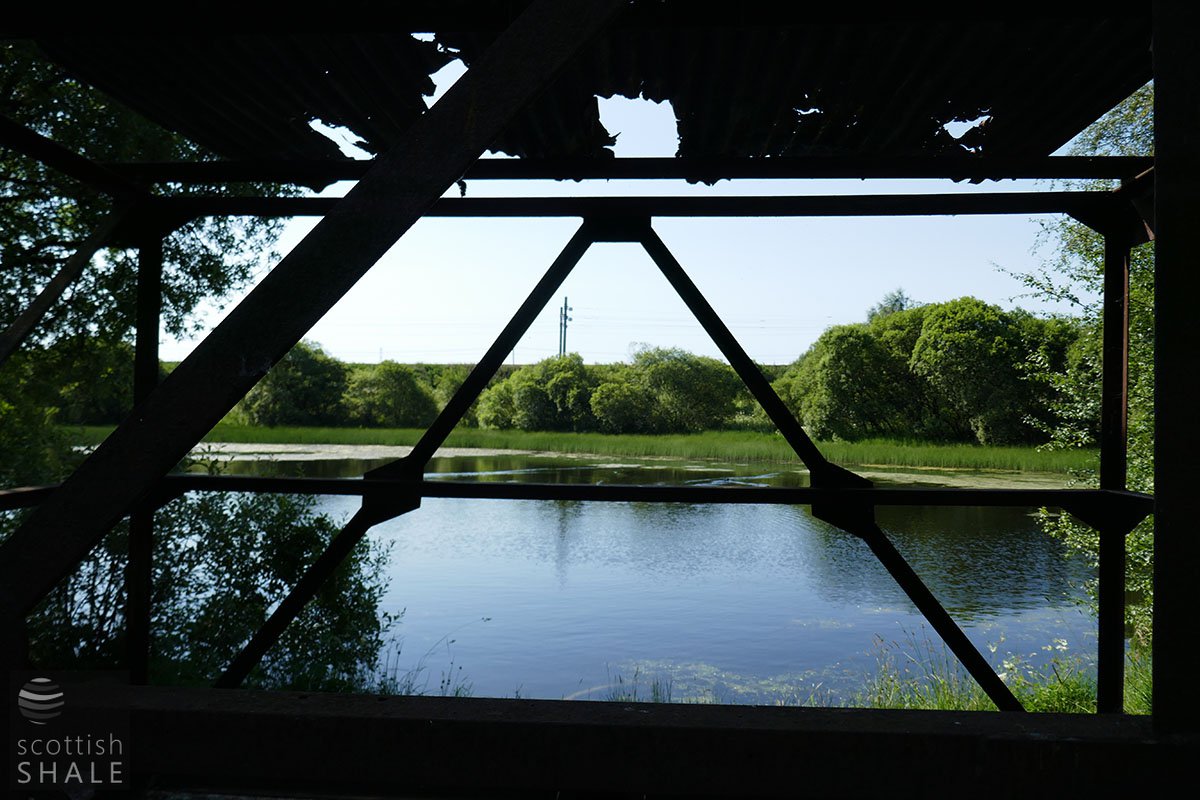 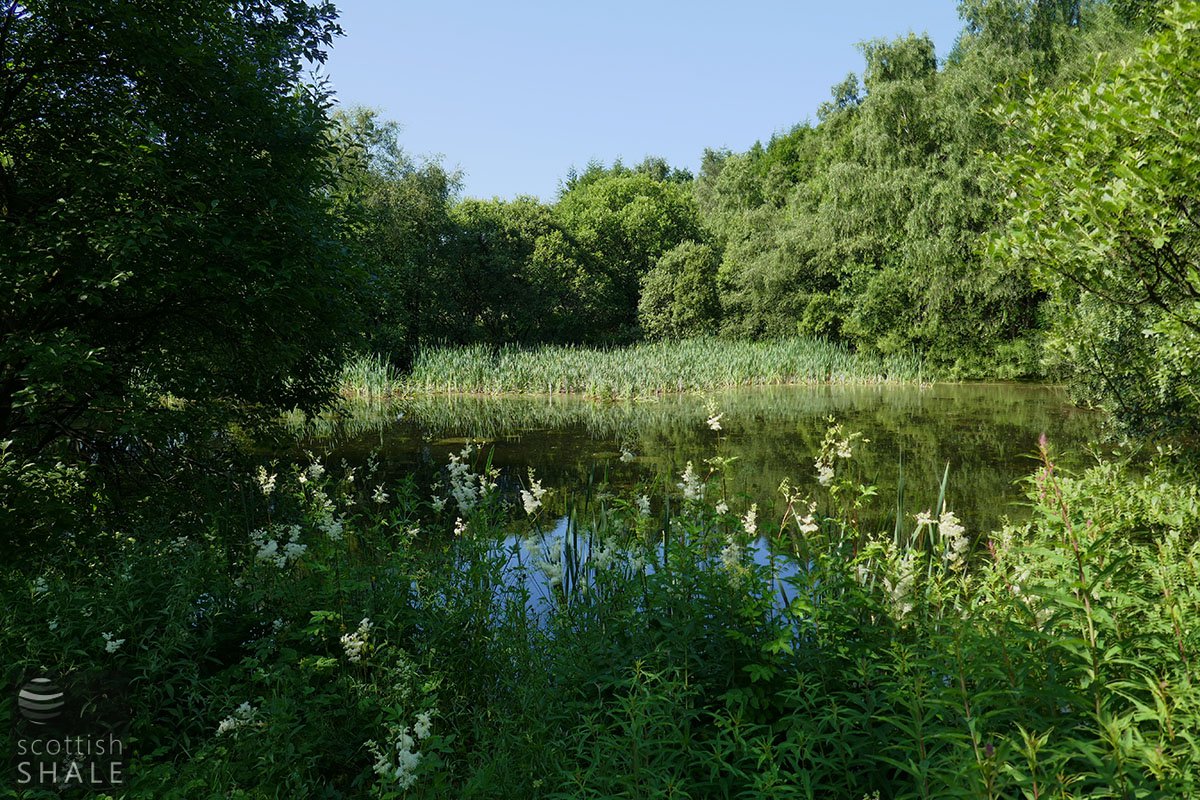 Evidence of Young's Paraffin Light and Mineral Oil Company (Limited) Addiewell, near West Calder, Edinburghshire Our works are situated on the Breich River. Employ 700 hands. The bed of the river has not silted up. Our works are not affected by floods. The stream is very seriously polluted by mines above, and rendered quite useless. Obtain supply of water by pumping from pits of our own; consume yearly 526,000,000 gallons. Use yearly, bituminous shale, 134,000 tons; sulphuric acid, 2940 tons, and caustic soda, 628 tons. Produce naphtha, 120,000 gallons; crude paraffin, 1300 tons; lubricating oil, 172,000 gallons; illuminating oil, 2,285,400 gallons; and sulphate of ammonia, 585 tons. The whole of the waste liquid produced at our work is burned under our furnaces. Produce 11,000 tons of shale refuse, which are deposited in heaps on our premises. Use steam, 280 nominal horse-power. Consume yearly 73,210 tons of coal, the ashes from which are used to repair roads. The excrements of our work people are used on our own farm. Have no suggestions to offer as to the best means of avoiding pollution in future, or as to the conservancy of rivers and streams.

Report on the pollution of Scotch rivers to the Rivers Pollution Commissioners, as reported in Falkirk Herald 28th August 1873

Young's Paraffin Light and Mineral Oil Company Limited desire offers by 15th inst. for the consideration of private railway and sidings at Addiewell, near West Calder, extending in length to about 1½ miles. Copies of specification may be obtained at the company's office. ? West George-street, Glasgow; or at the mining office in their Addiewell Works, where the drawings can also be seen. The company's mining manager will point out the line of railway and works on 9th instant, leaving Addiewell office at eleven o'clock a.m.

ADDIEWELL OIL WORKS ARE ABLAZE THIS MORNING, AND GREAT DAMAGE IS DONE

Despite Strenuous Efforts of Firemen – The most destructive fire that has ever overtaken the Addiewell Oil Works, West Calder, belonging to Young's Oil Company, Limited, broke out shortly before four o'clock this morning, and raged till after nine o'clock. The outbreak took place in the Greenhill department of the works. The paraffin, after being separated from the oil the refinery, is pumped to this department and stored, and here also it goes through its first purification. Above the sheds were four full tanks of paraffin, and there was also a quantity in process of purification. The fire originated about the middle of the department and spread with great rapidity. As soon the fire was discovered the works fire horn was sounded, and the works fire brigade promptly answered to the summons. A south wind was blowing, which carried the flames across the Greenhill, and threatened the other departments of the work. The roof of the sheds did not withstand the strain long, and the tanks above caught fire, and fell into the building. This greatly increased the volume of flames, which soon got hold on the valuable candlemaking department. The roof above this department caught fire, and the tubhouse was soon also burning. The workmen fought hard to save this department. At times it looked if it would be lost, but, just when things looked worst., the wind veered round, and the danger was averted. A telephone message had been sent the Edinburgh Fire Brigade, and when the necessary guarantee had been given a fire engine and squad of men, under Superintendent Allan, came out with the first passenger train. A local team of horses was secured, and took the fire engine to the works, a distance of two miles. By this time the wind had gone round to the north, and the fire spread along the pipes, and caught the heavy oil sheds. Theses were ablaze in few minutes, and everything inside the buildings was destroyed. The fine refrigerating plant to the west of the burning buildings was also threatened, but fortunately the firemen were able save this plant. A source of danger at first was the works gasometer, which was only a few yards from the burning buildings. Every precaution was taken here by lowering the gasometer to the ground level. The naphtha department, where all the works naphtha stored, was only short distance off, but the arrival of the Fire Brigade saved any risk in that direction. No reliable estimate of the damage can be formed, but must be considerable.

A serious outbreak of fire took place at the Addiewell works of Messrs Young's Oil Company yesterday forenoon. The fire originated at a point where. The hutches of spent shale come out, from -the retorts, and in a short time the woodwork of a large platform which carries the railway from the breaking machines to the retorts was in flames. ^ The fire spread with great rapidity. The works fire brigade were called out, but it was early evident they would be unable to cope, with the outbreak. A message was sent for, the Edinburgh Fire Brigade, and a motor with a fire engine and a detachment of men arrived, at the works about one o'clock.. A copious supply of water was available at the works pond, and the firemen at first directed their efforts to keep the flames from spreading to the other departments. In. this they were successful. In, a. short time they had, mastered the fire on the; large wooden platform, and had stopped its progress-along several of the main pipes which threatened trouble.- All the woodwork at the eastern end of the retorts however, was destroyed; and one of the main pipes snapped. At the end of each of the three benches of retorts a ratchet-machine was housed. These machines keep the shale in constant movement inside the retorts. The, three houses were destroyed, and it is feared the machinery will be seriously damaged. A large gas, pipe carrying; the return gas from the producers to the retorts, took-fire and burned furiously for several hours. Gradually however, the firemen gained the mastery, and in the afternoon all danger of the flames spreading was at an end. The firemen had to stand by, however, as the woodwork repeatedly burst into flame with the great heat; the material damage was considerable, but no reliable estimate of it could be formed. It will take several weeks to replace the material destroyed, and in all probability, the works will be thrown idle for a time.