Perhaps the world's first commercial-scale oil refinery, and the site where James Young and his partners Edward Binney and Edward Meldrum experimented and perfected many of the fundamental technical processes of the oil industry. In 1864, when the partnership was dissolved, the works were bought by James Young and subsequently passed to Young's Paraffin Light & Mineral Oil Company. Crude oil from coal and shale were produced at the works until c.1887. Production of Sulphuric Acid, used in the refining and processing of oils, continued on the site until c.1956.

Redwood noted: "Great curiosity was of course manifested by all inhabitants in the neighbourhood, and for miles around the Bathgate Oil Works. To prevent too inquisitive people from learning and seeing too much of the methods and machinery used in making and refining the crude oil, a massive stone wall, calculated to withstand the attack of artillery was built around the works; and the two heavy wooden gates, which afforded the only means of ingress and egress, being constantly guarded, caused the works to be spoken of as “the secret oil works”.

In 1889 additional land was leased as site for “a small engine with condensing apparatus for extraction of naptha, also ground for a vitriol chamber.” 215852 (page10) 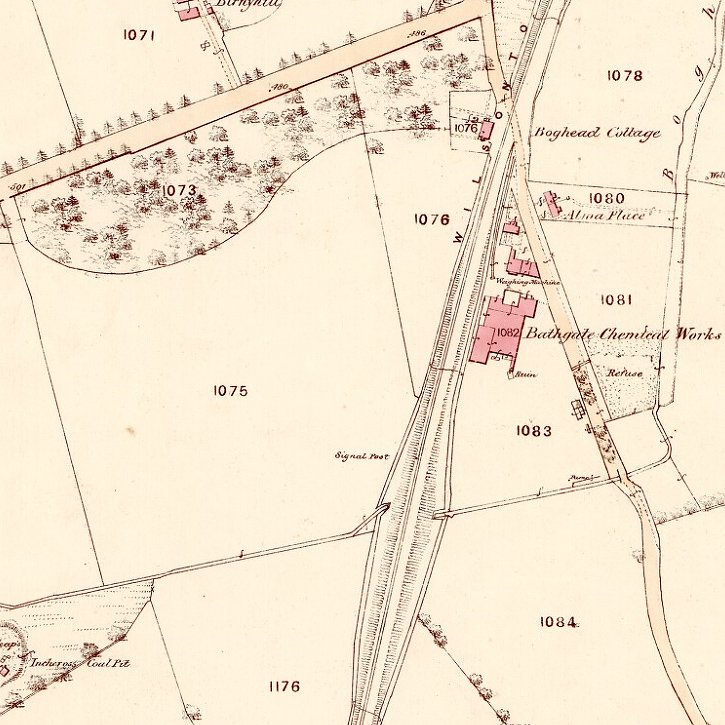 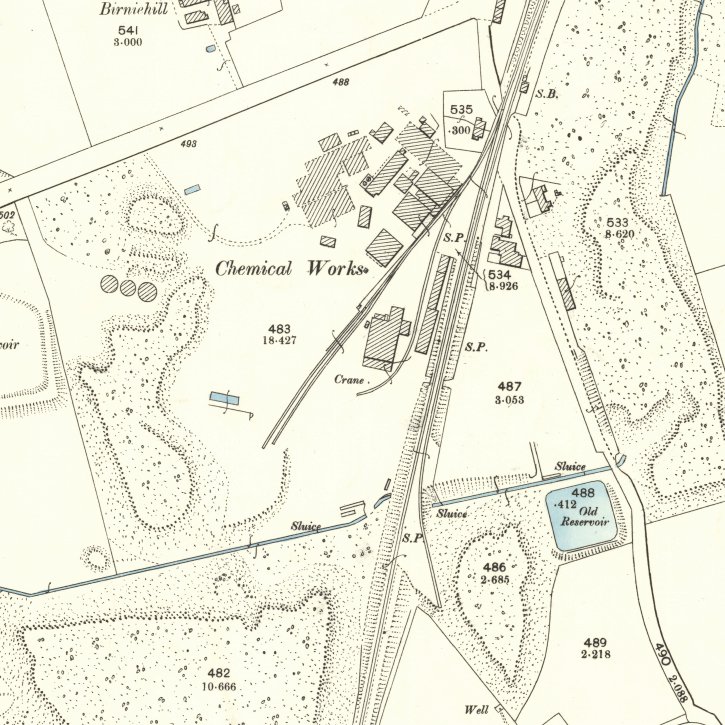 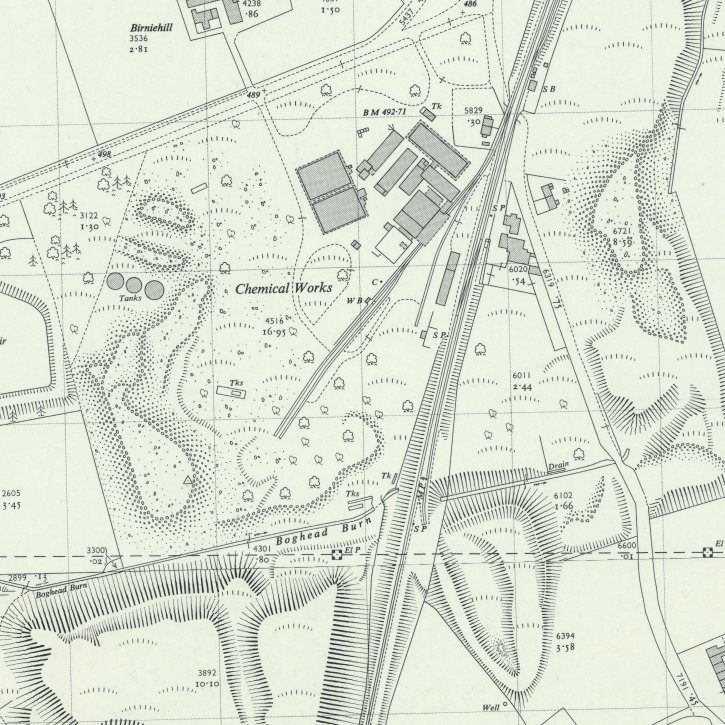 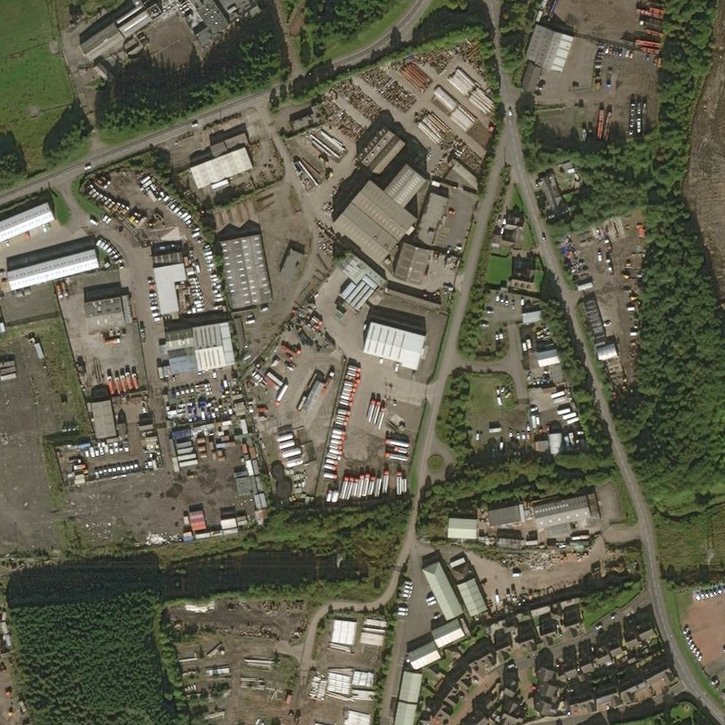 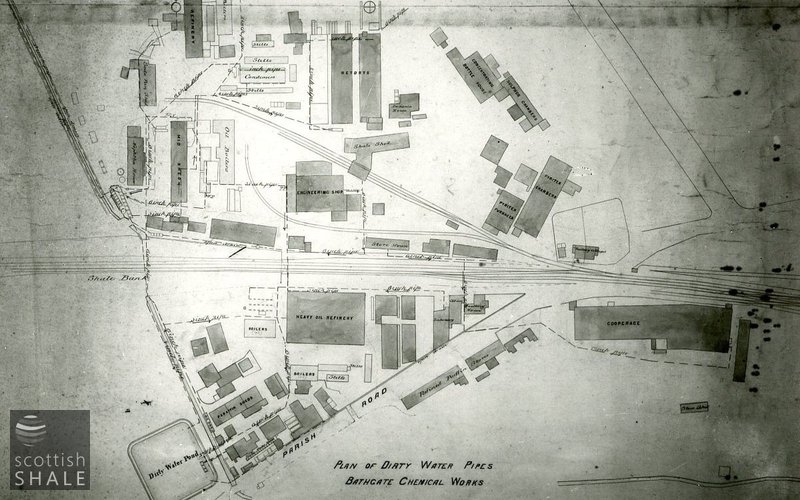 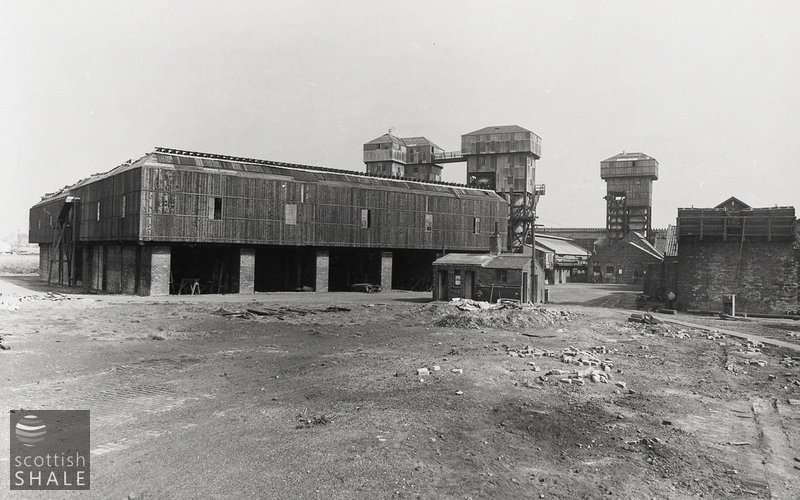 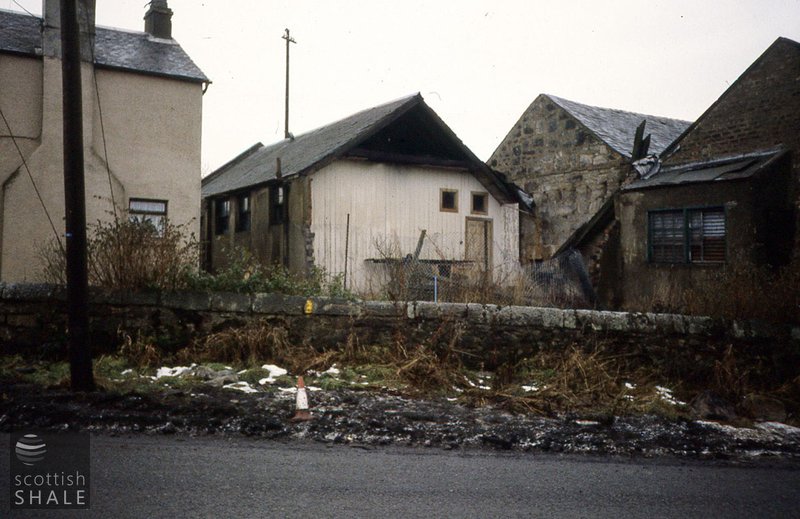 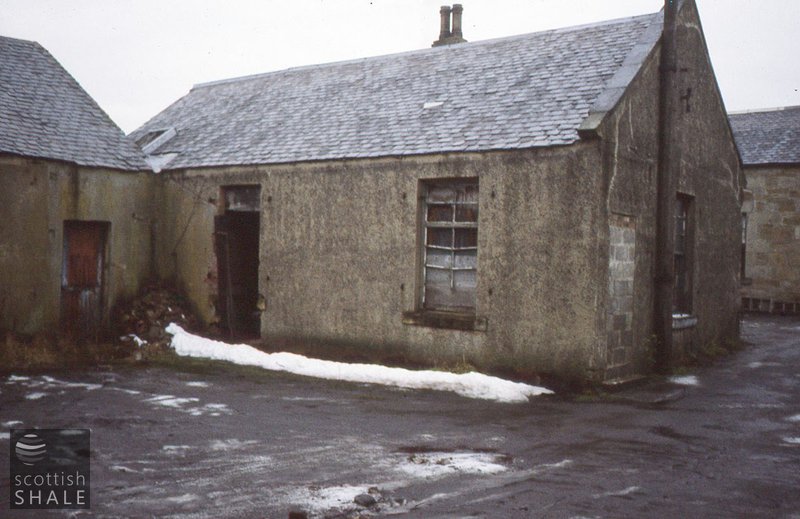 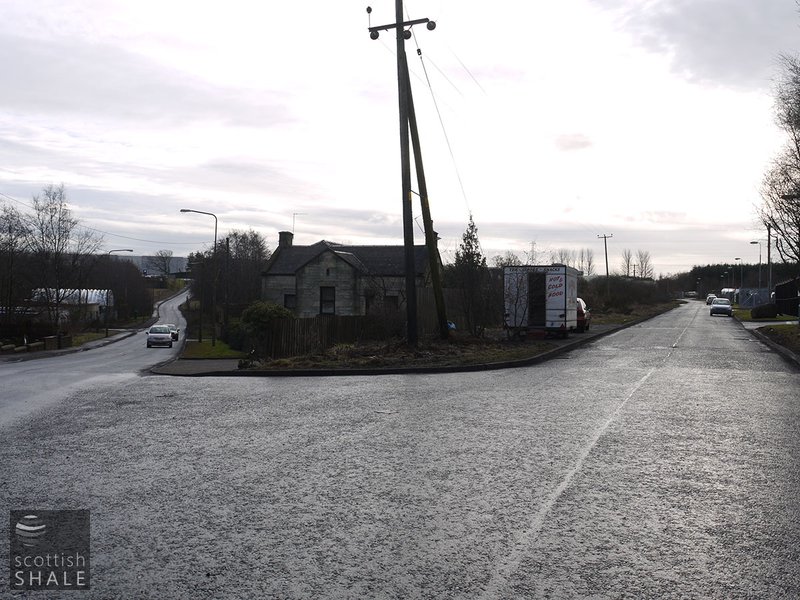 View towards "Meldrum Cottage", the road on the right lies on the course of the Wilsontown, Morningside and Coltness Railway. Looking south. January 2011. 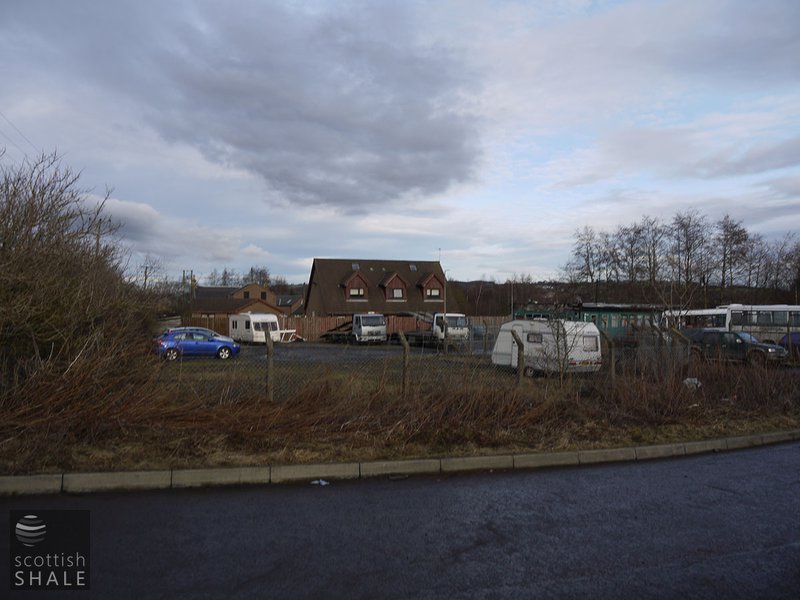 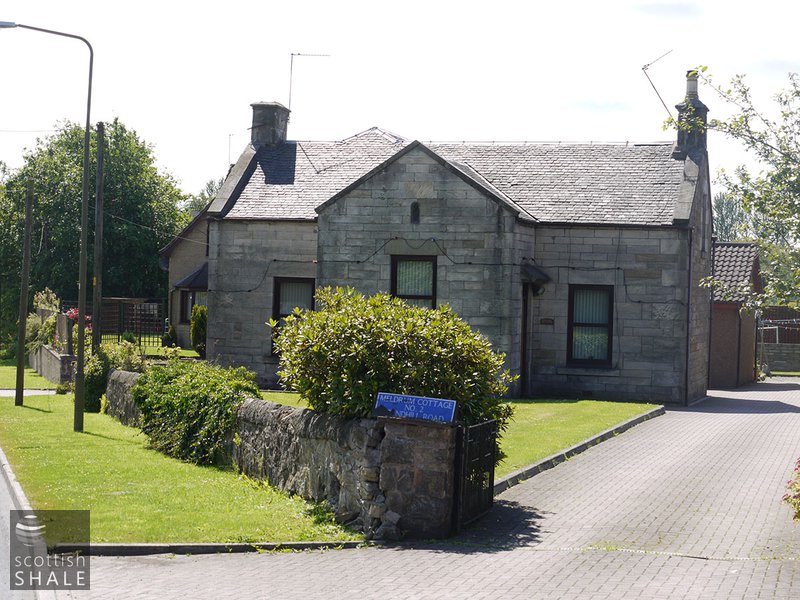 Bathgate Chemical Works, occupied by Messrs Meldrum & Company. It appears that about eight o'clock some gas retorts having got overheated, burst, and that the flames spread rapidly over the paraffin sheds and other buildings, which being full of inflammable materials, also caught fire. The fire raged till past midnight, notwithstanding that every exertion was made, and it is understood that it will take £1000 to repair the damage and cover the loss sustained. The Chemical Works are not insured.

In consequence of the Expiration of the Partnership of the Firms. THERE WILL BE SOLD BY PUBLIC ROUP, within Messrs. Gay & Black's Saleroom, No.65A George Street, Edinburgh, on Wednesday the 26th day of October next at two o'clock afternoon (if not previously disposed of by Private Bargain). THE ORIGINAL AND WELL-KNOWN PARAFFINE AND PARAFFINE OIL WORKS at BATHGATE, belonging to and carried on by Messrs.. YOUNG, MELDRUM & BINNEY, under the styles of Firms of E.W. BINNEY & Co., and E. MELDRUM & Co; respectively, comprising Land, Buildings, Steam-Engines, Machinery, Tanks, and the whole Fixed and Working Plant, with the exception of Coals, Chemicals, Casks, and Stock, both manufactured and I the process of manufacture, together with all rights belonging to the Partnerships, all as occupied and used by the said firms. The works are situated in the vicinity of Bathgate; upon the Railway from Bathgate to Morningside, by which they are intersected, and there is communication by railway from the Works to the Edinburgh and Glasgow, the Caledonian, and the Monkland Railways. The Lands extend for about 25 acres, and the Feu-duty unredeemed amounts to £161, 2s., 8d., or thereby. The Works may be seen on Mondays between the hours of Twelve and Three, by Tickets only, which may be had at Messrs. HORNE & ROSE'S Chambers, 32 North Castle Street Edinburgh, by whom offers for Purchase by Private Bargain will be received on or before the 15th October next.

Considerable surprise was created this on Saturday night in consequence of a rumour having been very extensively circulated the effect that the Bathgate Chemical or Paraffin Oil Work, which generally from 500 to 700 persons, was to be closed for season, and that all hands had been paid off. Such, however, is not the case. But the following particulars may be relied on as the true state of affairs;- At the work there is what is termed sixty sets of retorts, each set consisting of four retorts. Of these sixty sets generally forty sets are constantly kept going, employing about 120 men, consisting of retort men, hoist men, and black-stuff men, all of whom, without any previous warning, were discharged from their employment on Saturday night, and all the retorts stopped. On Monday it was currently reported that all hands would be discharged on Saturday ; but for the veracity of this statement we cannot in the meantime vouch.

Our works are situated on the Bogend Burn. Employ 500 hands. The bed of the stream has not silted up. Our works are not affected by floods. The stream is not polluted by works above, but it is by mines. Obtain supply of water from our pits, and consume yearly about 300,000,000 gallons. Use yearly bituminous shale, 236,379 tons; sulphuric acid, 4790 tons; and caustic soda, 766 tons. Produce sulphuric acid, 2000 tons; caustic soda, 150 tons; naphtha, 150,000 gallons; crude paraffin, 1000 tons; lubricating oil, 250,000 gallons; illuminating oil, 1,500,000 gallons; and sulphate of ammonia, 130 tons. The whole of the waste liquid produced at our works is burned in our furnaces. Produce yearly 40,000 tons of shale refuse, which are deposited on our premises. Use steam, 120 nominal horse-power. Consume yearly 40,000 tons of coal, the ashes from which are put on to a waste heap or used for repairing roads. The excrements of our workpeople are carted away by farmers and used as manure. Have no suggestions to offer as to the best means of avoiding pollution in future, or as to the conservancy of rivers and streams. bongo.

Report on the pollution of Scotch rivers to the Rivers Pollution Commissioners, from The Falkirk Herald 28th August 1873