Serving: not in commercial production.

The Kimmeridge shales extend in a narrow band running approximately east to west between Holworth and Abbotsbury. Except where exposed on the cliffs near Holworth, the shales are buried beneath later sediments. There are a number of early accounts of "coal" or shale being worked at Upway (1833), Portesham Dairy (1856) and Buckland Ripers (1872). 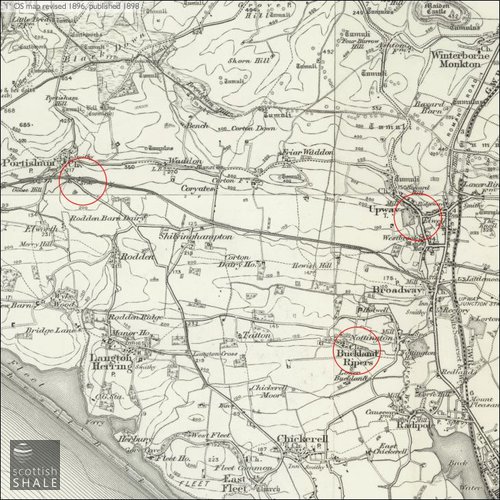 William Manfield (c.1848-1892) was proprietor of the Portesham estate, and served as secretary of the Abbotsbury Railway Company. The railway was promoted locally to exploit the "vast mineral wealth" of the Abbotsbury, but experienced great difficulty in raising the necessary capital. Construction of the railway began in 1879, but the line was not opened until 1885.

Mansfield was keen to exploit the minerals on his estate, and a branch line with cable-hauled incline was built east of Portesham station to serve quarries where Portland and Purbeck stone was worked, and limestone burnt in limekilns. A bituminous shale was reveal led during railway construction works in the cutting to the east of the station. A number of shafts were sunk in search of shale, but all encountered problems with flooding. In 1883, the Mansfield pit was sunk (50.668493, -2.554286) to a depth of 189 feet and encountered seams of rich shale, samples of which were sent to Scotland for testing.

The OS map (surveyed 1888) shows a shaft, a spoil heap and two small buildings marked "engine house". A second shaft near the railway might represent the inclined adit driven from the outcrop which was described by Strachan. It was stated that the trial was abandoned on the death of Mr. Manfield

It is thought that William Manfield died in 1892, and much of the estate was sold off in 1896. His son, William Hardy Manfield c. 1860-1937), retained an active interest in the bituminous shales of Dorset, and for a period was manager of a shale works in the south of France.

Mapped by the Ordnance Survey of c.1901, showing the location of sites where shales were worked. 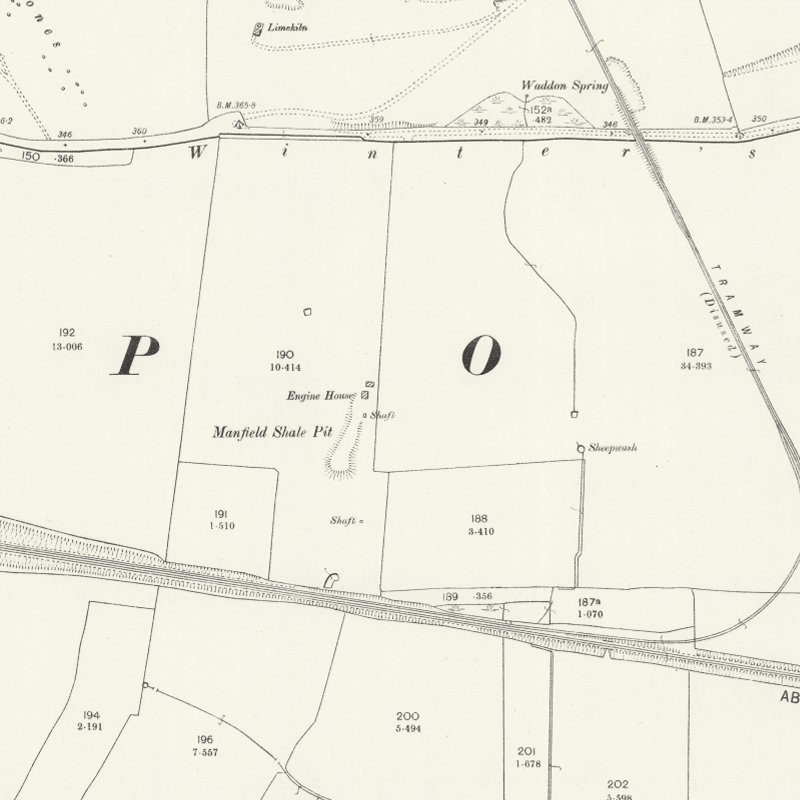 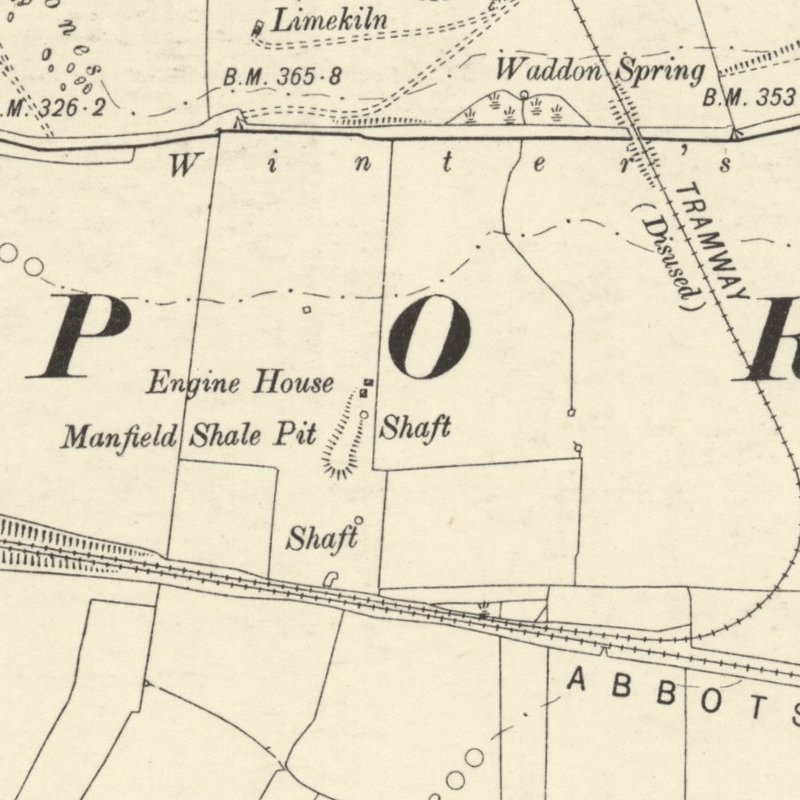 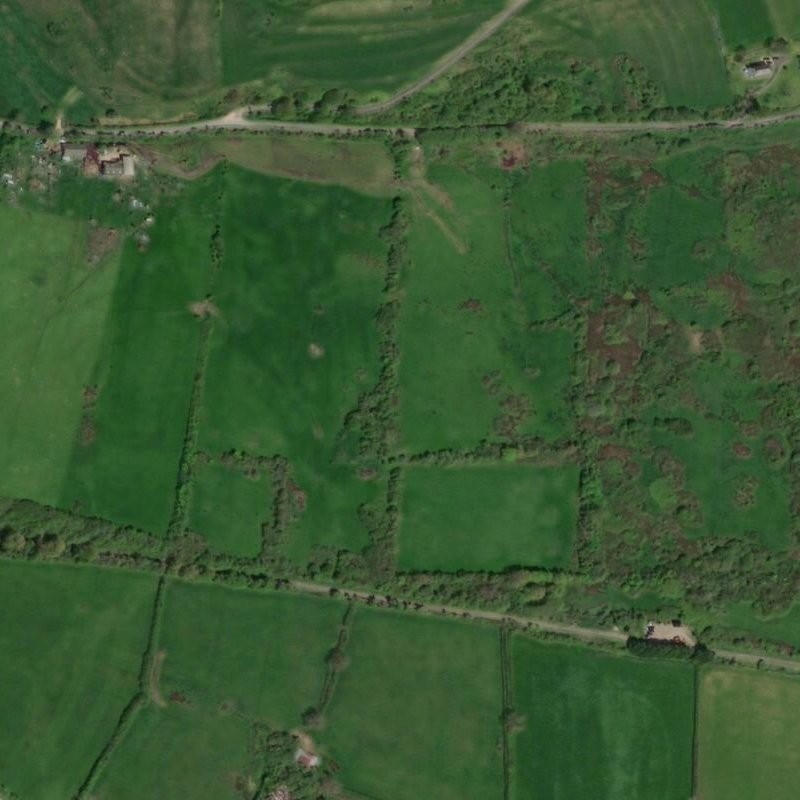 Coal Gas.—It has been proved that the Bituminous Shale, commonly called Kimmeridge coal, produces as much, if not more gas. than the Sunderland coal, and as there a substance which would sufficient to furnish with light for century, the inhabitants will find is a superior mode of lighting the town less expensive, than first thought and less so than the inhabitants of other towns, who have-not fuel within so short distance.

On the Property of Henry Sherren, Esq., in Upway field is a pit at distance from the four mile stone on the Weymouth road where it has formerly been dug, and where it may be procured with little labour. The town of Weymouth may be supplied with this description of fuel for gas from Radipole where there is great abundance, indeed there is large substratum of it extending from Abbotsbury to Corfe Castle, and it is surprising that portion of the county so very badly supplied with cheap fuel should not make use of it. The smell of it is disagreeable, but a strong and cheerful fire, and answers better than furze for baking and cooking, and the smell may be much lessened by exposing to the air six months before is used.

The excavations Buckland Ripers, near Weymouth, the site of the supposed coal-field, have been continued from day to day, but they have been considerably retarded by the prevalence of water. It is therefore conjectured that steam power will be absolutely necessary to clear the working. The pump has to be kept continually at work during the digging, the water lodging in the nighttime especially. The shaft has not yet been sunk 40 feet, and it is calculated that double that depth will have to reached before the coal is found. The site is several acres extent, and the project has created considerable interest in Dorset, especially as iron ore has, it is stated, been discovered in the neighbourhood of Abbotsbury, not far from Buckland Ripers

This Company is incorporated with the object of opening up the vast mineral wealth of the Abbotsbury District, and with a view of ultimately completing the coast line and connecting Weymouth more directly with Exeter and the West of England.

The mineral deposits in the neighbourhood of the proposed line are most extensive and important in their character. At Abbotsbury there are deposits containing millions of tons of Oolitic ironstone. At Portesham there are beds, 100 acres in extent, of Purbeck and Portland stone. These beds are about 100 feet thick, and the demand for this stone in London alone is unlimited.

The line for some distance will pass through Kimmeridge clay and shales, which are highly bituminous and impregnated with oil, similar to the products of the celebrated Kimmeridge beds. Some of these beds yield a considerable quantity of alum. There is also a brick earth of unquestionable quality, and this points to a heavy trade in carrying bricks over the railway.

Apart from the Agricultural Merits the Estate, there are within its boundaries, and connected with the Railway, extensive and well-established of PORTLAND and PURBECK STONE, of approved quality, in addition to Valuable LIME KILNS, both of which, under enterprising management, should alone produce a considerable trade and permanent income. MINERAL SHALES are also found on the Estate, which may be valuable in the future.

From advert for sale of Portisham Estate, The Western Gazette, 22nd May 1896

At Portisham an energetic attempt has been made of late years to turn the "coal" to account. About 1856 it had been discovered in the Potisham Dairy (100 yards west of the station) at 14 ft deep, and a few tons were got out. A pit was sunk on the east side of the building and intersected the bed at 12ft deep, but in both cases the works were drowned out.

In 1879 the railway cutting east of the Station, having disclosed the outcrop, the "coal" was mixed with clay and burnt for ballast. Various other shafts were sunk, but all were overpowered by water until the Manfield Shaft was made in 1883. This was dry until coal was reached, when a feeder, which yielded at first 11,000 gallons per hour was struck. A very rich oil shale was met in the shaft at 46 ft 7 inches depth, but the principal bed at 137 ft, a hard rock band occurring 33 feet below it.....

The shaft was sunk to a total depth of 189 ft with a boring to a further depth of 126 feet. It is situated 170 yards north of the railway, and an incline was driven to it in the "coal" from the outcrop at the side of the line, the inclination being 1 in 4 (15 degrees). One hundred tons of both parts of the principal bed were sent to Scotland for distillation, but in consequence of the death of Mr. Manfield the trial seems to have been abandoned.

From the Geology of the Isle of Purbeck and Weymouth. By A. Strachan, published 1898

At the age of 77, Mr. William Hardy Manfield, of Portesham House, Portesham, passed away suddenly on Friday. Mr. Hardy Manfield was a great-greatnephew of Lord Nelson's flag captain, Sir Thomas Masterman Hardy, whose monument on Blagdon-hill above the picturesque village of Portesham is a wellknown Dorset landmark. Thomas Masterman Hardy spent a number of years of his boyhood at Portesham House, and his sister Catherine married John Collard Manfield, attorney, of Dorchester. Portesham had been Mr. Hardy Manfield's home all his life, and he will be widely remembered as a notable sportsman who had occupied a conspicuous position in Dorset county cricket. Deceased about 40 years ago, was a playing member of the Yeovil Rugby Football Club, rendering yeoman service as a forward, and leading the pack with rare dash. On Friday he appeared to be in his normal health and was out for a considerable part of the day, but soon after retiring night he collapsed and passed away.

Mr. Hardy Manfield was educated at Dulwich and Pembroke College, Oxford, He had a great knowledge of the oil bearing shales of the country and had for many years been keenly interested in Dorset shale, and one room in his home he had fitted as a laboratory in which he experimented. A number of years ago he was for a time engaged in managing a shale mine in the South of France.