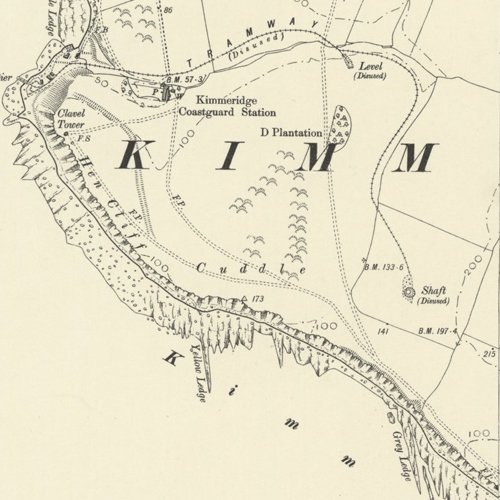 Type of working: Adits and pits.

This page is not intended to offer a full description and history of the Kimmeridge shale mines. There are many other publications and internet sources that offer a wealth of information of the geology, workings and surviving remains of shale workings at Kimmeridge. Dr. Ian West's profusely illustrated web pages on the geology of Kimmeridge coast are particularly commended.

All published histories should however be treated with caution. No comprehensive record is known of the various leases granted for the working of the shale at Kimmeridge, adding to the difficulty in matching the remains on the ground with the activities of any particular company. It is also unclear whether all of the many proprietors of Wareham Oil Works, operated the Kimmeridge mines on their own account, or whether shale was supplied under contract by third parties.

Kimmeridge Bay is thought to have been a site of industry since prehistoric times, and erosion by the sea has revealed a number of early hearth areas where shales were used to fuel the production of salt. From about 1610 Sir William Clavell developed salt, alum and glassworks in an area on the east side of Kimmeridge bay. The site of this remarkable early industrial complex is now a scheduled monument.

Mapped by the Ordnance Survey of c.1903, showing the general area.

During the Victorian period, there appears to have been three main phases of working oil shale at Kimmeridge. While the precise sequence of working remains unclear, the following map attempts to summerise the available evidence, The extent of workings is only shown schematically. The numbering of the levels driven in from the cliff face is taken from a sketch map in "A Guide to Purbeck Coast and Shipwreck by Rodney Legg (1984) said to be based on an 1890 plan of the Kimmeridge Oil and Carbon Co.'s working in that author's possession.

Limestone was also mined at Kimmeridge for cement production, often in conjunction with oil shale working 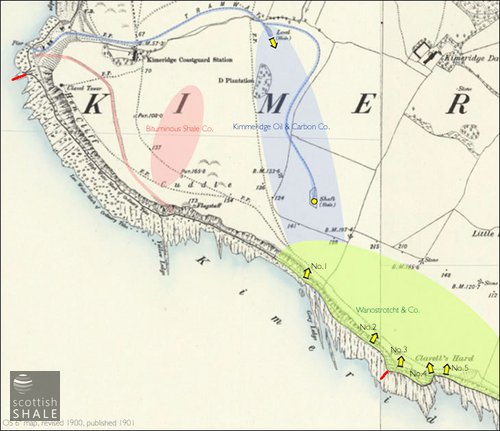 The Bituminous Shale Co.. acquired a lease of minerals at Kimmeridge in 1848, and the following year advertised for contractors to work the shale. In the Young v. Fernie trial of 1864, John Vine, an long-standing employee at Wareham, described mining operations at Kimmeridge during the 1850's

"I should say the place where we got it from was about a mile and a half south-west of Colonel Mansell's house. They have to take off the earth at the top. They begin on the slate and work down to it, and take it out by batches. There are 5 or 6 feet of slaty stuff ...then we come to the Kimmeridge coal, which is about 8 or 10 inches. Then you come to cement stone, as they call it. Great quantities of it go away to the Isle of Wight for cement at the present time."

This description suggests that the shale was obtained mainly from opencast working. This coincides with a description by Strachan that:

" (The outcrop of the blackstone) strikes inland (from Hen Cliff), the outcrop being marked for about 800 yards northwards by a line of old surface workings"

The company's Bill of Incorporation included powers the construction of railways and tramroads, and the earthworks shown on the first edition OS map (surveyed 1888 OS, seem likely to indicate the route of a tramway that brought shale from the opencast workings on the cliff top down to a pier at Kimmeridge Bay. While limestone was shipped by sea, the majority of shale was carted by horse and cart to Wareham Oil Works.

Wanostrocht & Co. acquired a lease of mineral at Kimmeridge in 1857 and began working oil shale in the vicinity of Clavell's Hard where the Blackstone outcrops in the sea cliffs. A platform or ledge was cut into the cliffs, from which a number of levels were driven into the shale seam. This platform was linked to an "elegant and new cast iron pier" from where the shale was shipped, as there was no road access to the site. It appears that the iron pier was a frail structure built in a terribly exposed position and had a short life.

A new and more substantial stone pier on Kimmeridge bay was under construction in 1858, and while traces of this are still extant, it seems that the structure was quickly eroded and is not marked on the 1888 OS map. 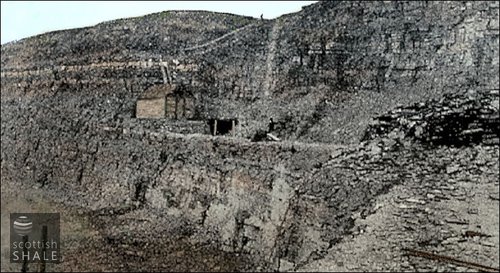 The formation of the Kimmeridge Oil & Carbon Co. Ltd. in 1883 seems to have been marked by a further investment in the Kimmeridge mines. The 1888 OS map shows a further pier on Kimmeridge bay, and a tramway linking this to a level and, further to the south, with a pit shaft . It appears that these workings were linked underground to No.1 adit of the former Wanostrocht workings.

Recent histories name the pit as "Manfield Shaft". This seems erroneous, most likely as a consequence of misinterpreting Strachan's account of the Manfield shale pit at Portesham.

Despite substantial investment, it appears that operations of the Kimmeridge Oil & Carbon Co. Ltd continued on a small scale. In 1889, Thomas George Whiterow of Kimmeridge is listed as the company's manager. In the 1881 census Thomas George Whiterow was listed as resident at the Post Office in Kimmeridge with his son Walter. The only other mine workers in the village were Thomas Whiterow (foreman of miners), David Whiterow (miner), Henry Whiterow (cement labourer) and Reuben Whiterow (foreman at cement works). The 1887 Mineral Statistics list Kimmeridge Oil and Carbon Co. Ltd. as producers of "cement stone".By 1891 Henry Whiterow was the only Kimmeridge resident to be described as a "shale miner"