Footpath from Easter Breich to Seafield

From the Shale Trail, at a point close to Oakbank Cottages, this right-of-way heads through farm and fields to the shale mining village of Seafield, one mile distance. The path is well used and in good condition, with no gates or stiles.

The walk starts from the A7015, constructed late in the 18th century as the turnpike road to Hamilton. The lands of Easter Breich, then part of the Livingston estate of the Earl of Rosebery, will have been enclosed and improved at around that time, being divided into five fields by hedges and ditches. A tree-lined tarmac road now leads to Easter Breich farm, where byres and barns have been converted into smart homes for a happy little community. The footpath zig-zags through what was once the farmyard, and continues along an unsurface farm track that serves the fields north of the farm. A narrower path then continues to the River Almond. The 1856 Ordnance Survey map shows a ford across the river at that point, but no road or path continuing north of the river in the lands of Seafield farm.

The village of Seafield was created to serve the shale oil industry. The first housing (the now-demolished "old rows") was built in the early 1880's to serve the Seafield works of the ill-fated Bathgate Oil Company. The Pumpherston Oil Company took over the oil works in about 1891, and built the "new rows" of workers houses that survive to this day on the south side of the main street. It seems that a path from the old rows, following the field boundary down to the ford on the River Almond, became established soon after construction of the oil works. By 1895 a simple footbridge had been built across the Almond, funded by public subscription from the shale folk of Seafield. Children from the Breich area used the path for their journey to school in Seafield, and following closure of the Seafield oil works in 1931, many workers trudged along the path each day to work in other shale pits and works

The path, and its continuation south by way of City Farm, linked Seafield to the bright lights of West Calder, and became recognised as a public right of way. The parish, and later the district council, had a right to repair the path if they considered it in the public interest, and arrangements were made for the occassional cart load of ashes to be dumped in swampy areas. The little footbridge over the Almond was frequently damaged when the river was in spate. The original wooden bridge was swept away in 1903, and its successor was damaged on many occassions as the river current scoured beneath abutments and piers. A new bridge with solid brick piers was constructed in 1936, and the present timber bridge now rest on one of the abutments of this predecessor.

Immediately south of the Almond footbridge you have the option of heading east through the Easter Briech woodlands on a path that will re-join the Shale Trail. Cross the footbridge and there's a crossroads with paths heading east and west, with a handy riverside picnic table nearby. Carry straight on, and the footpath to Seafield follows an arrow-straight route up the gentle slope towards the site of the shaleworker's rows. As the village has extended southwards, the route of the path has remained unchanged, and it now slices through housing schemes contained in a narrow canyon between tall garden fences. You finally emerge among the shaleworker's rows of Seafield village. 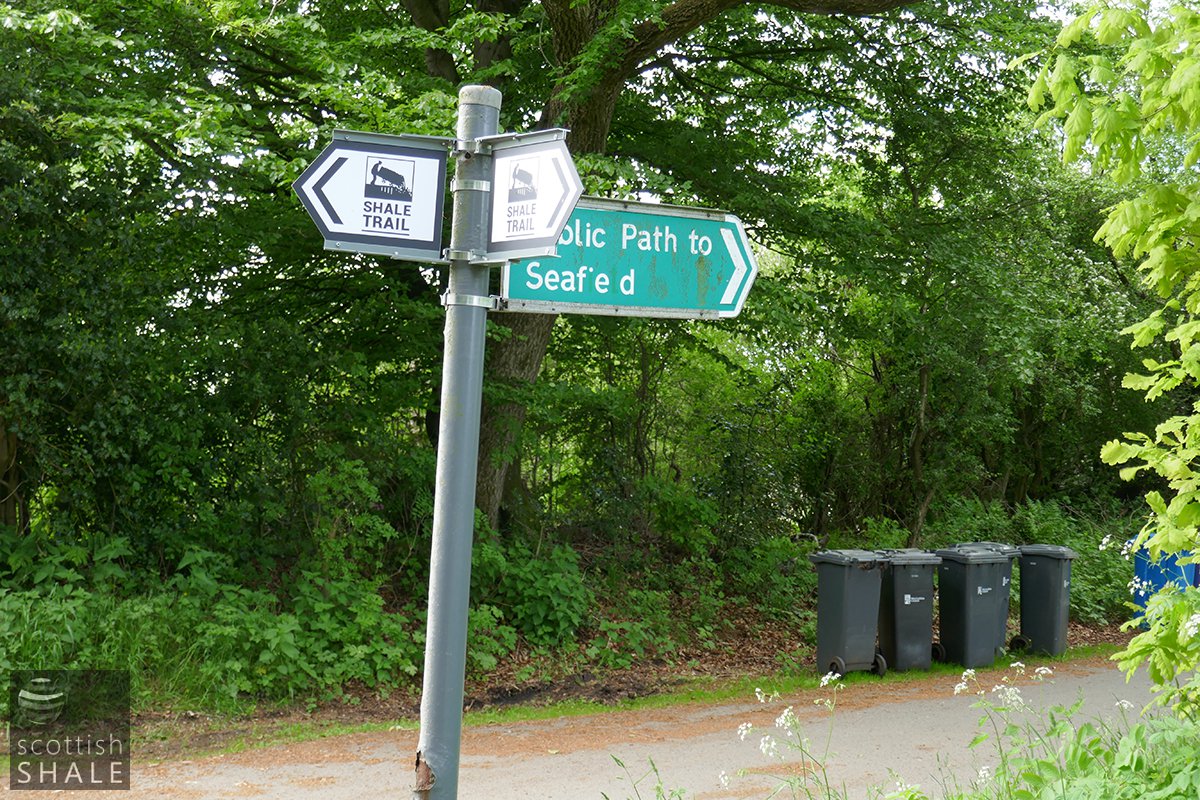 The start of the path, where the good folk of Easter Breich put out their bins 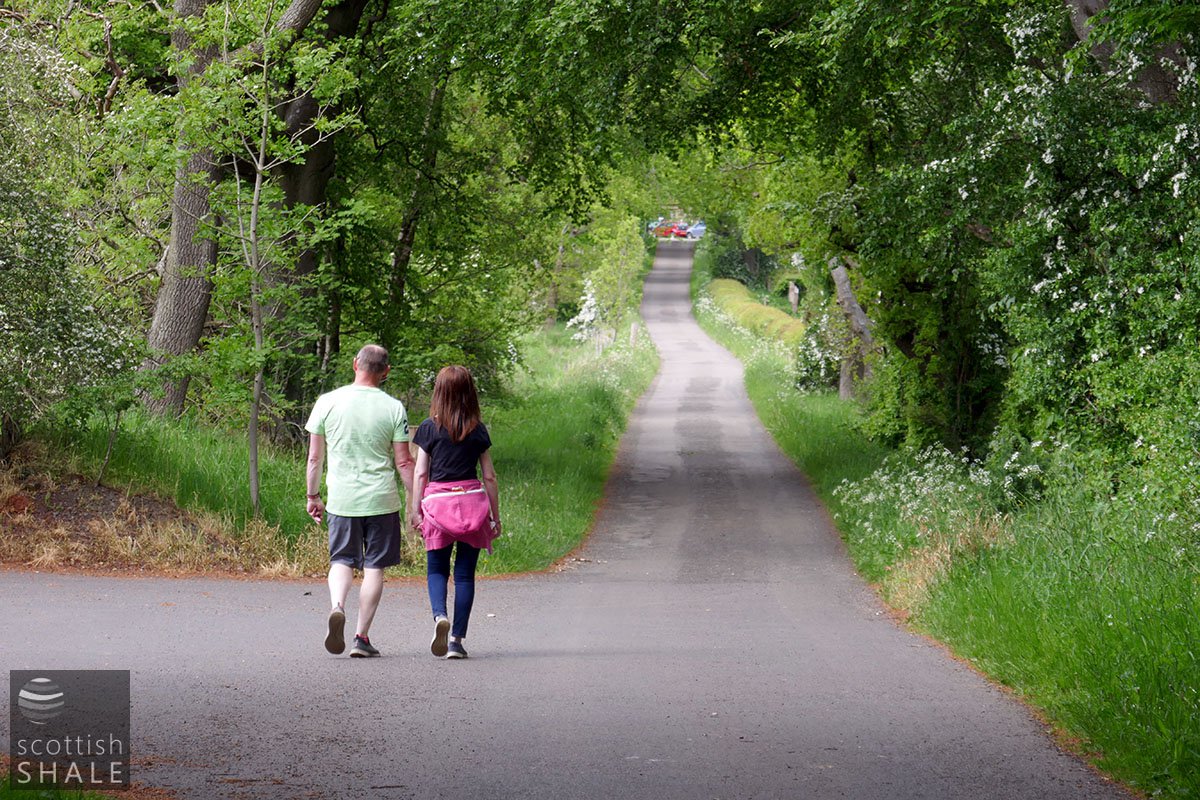 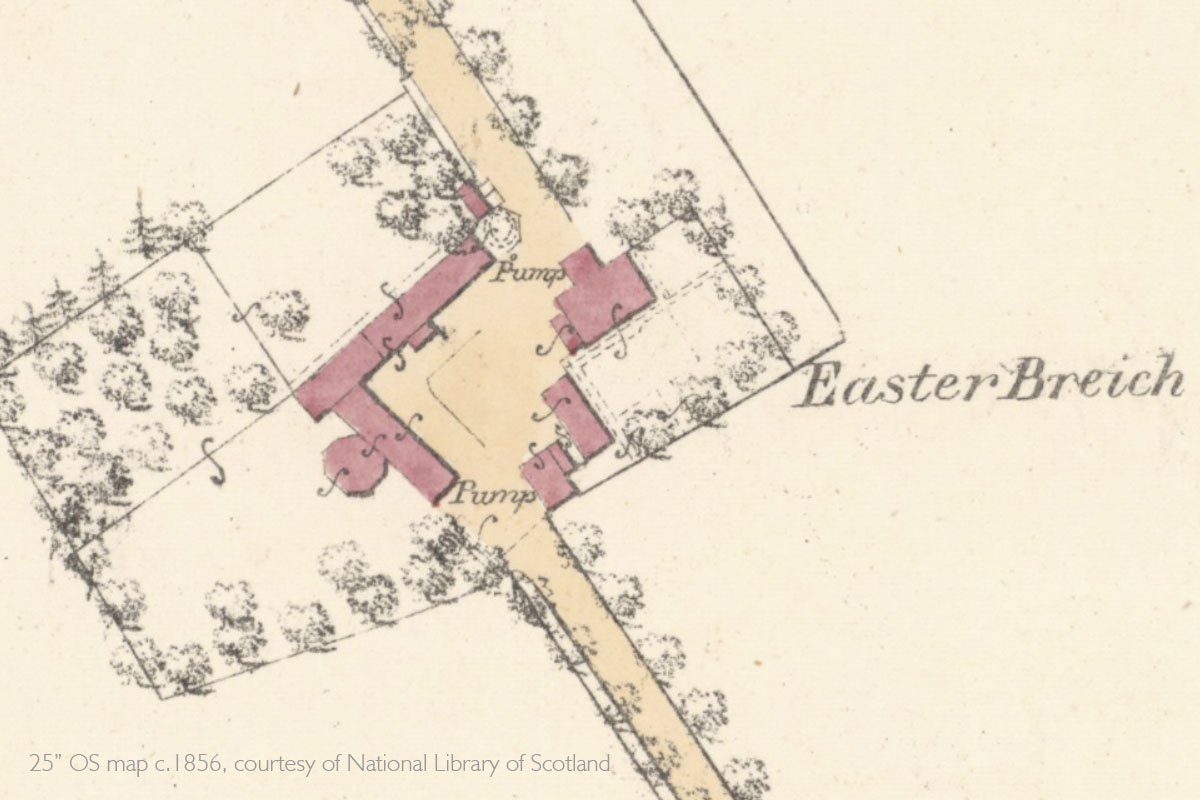 The basic arrangement of buildings has changed little since the 1850's 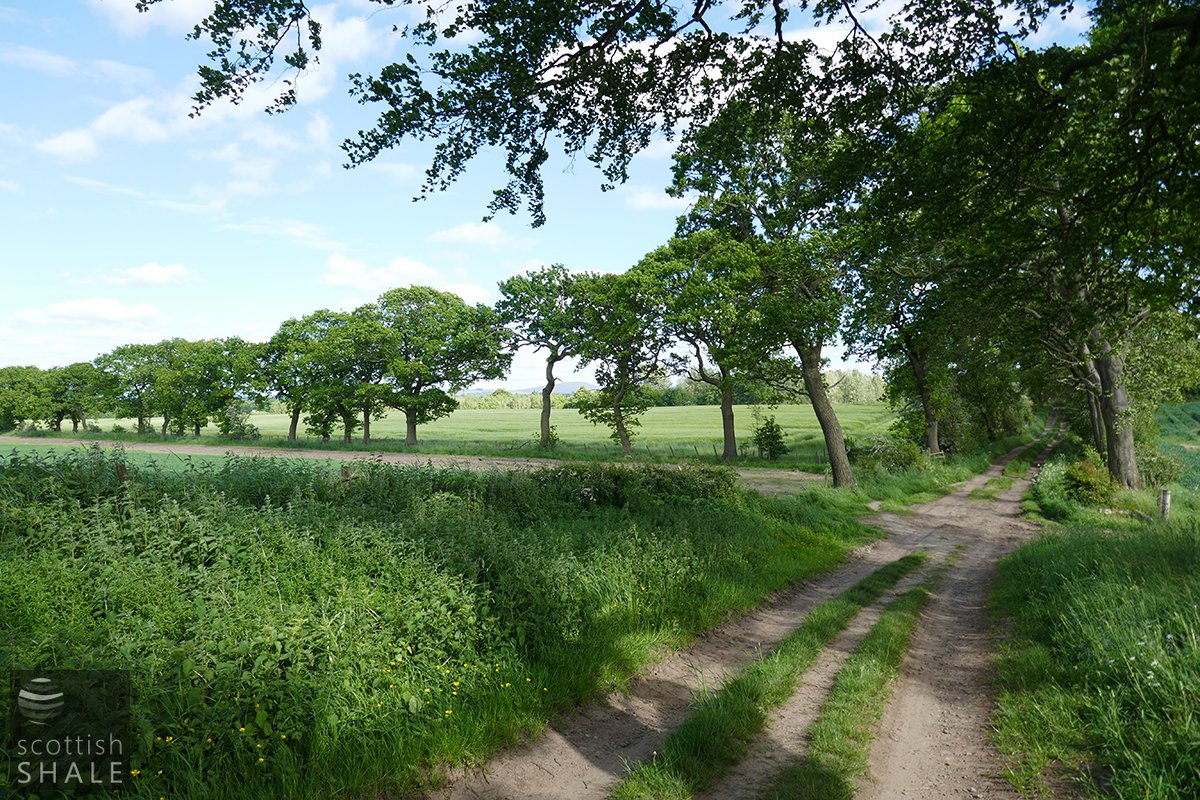 Looking east towards the Charlesfield estate 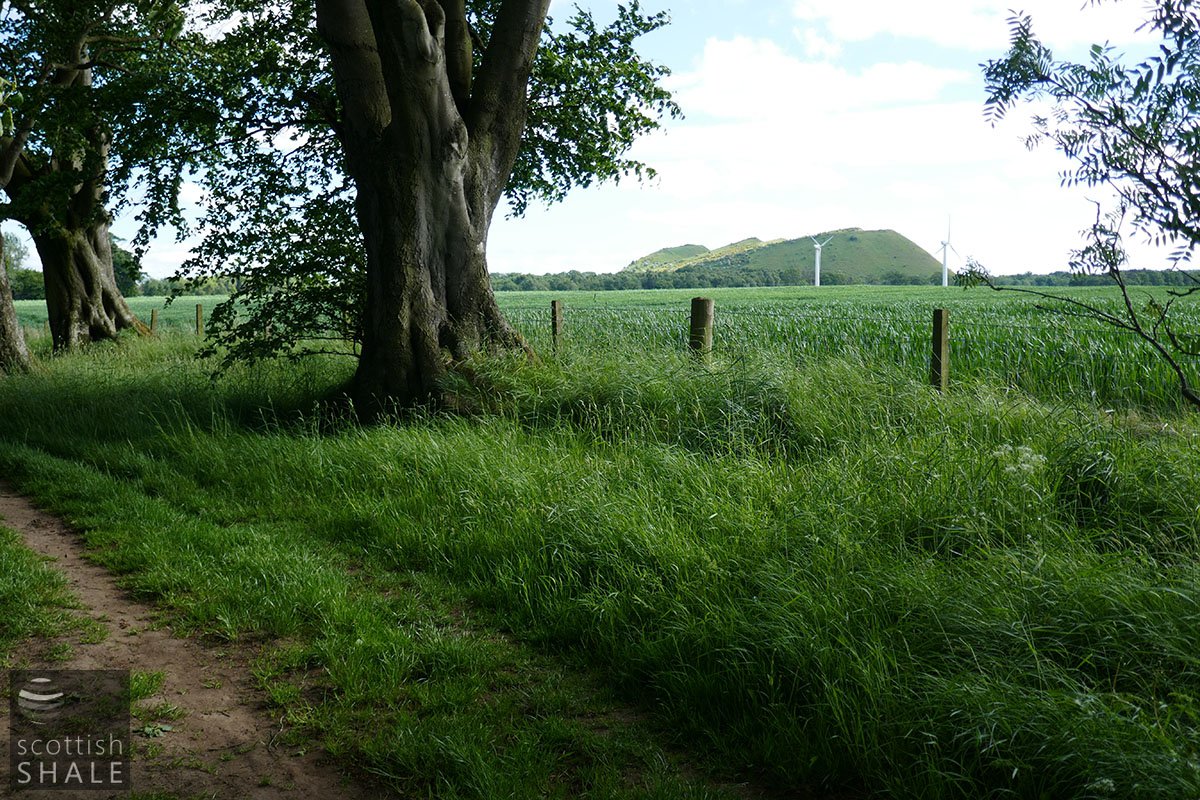 Looking west towards the five sisters 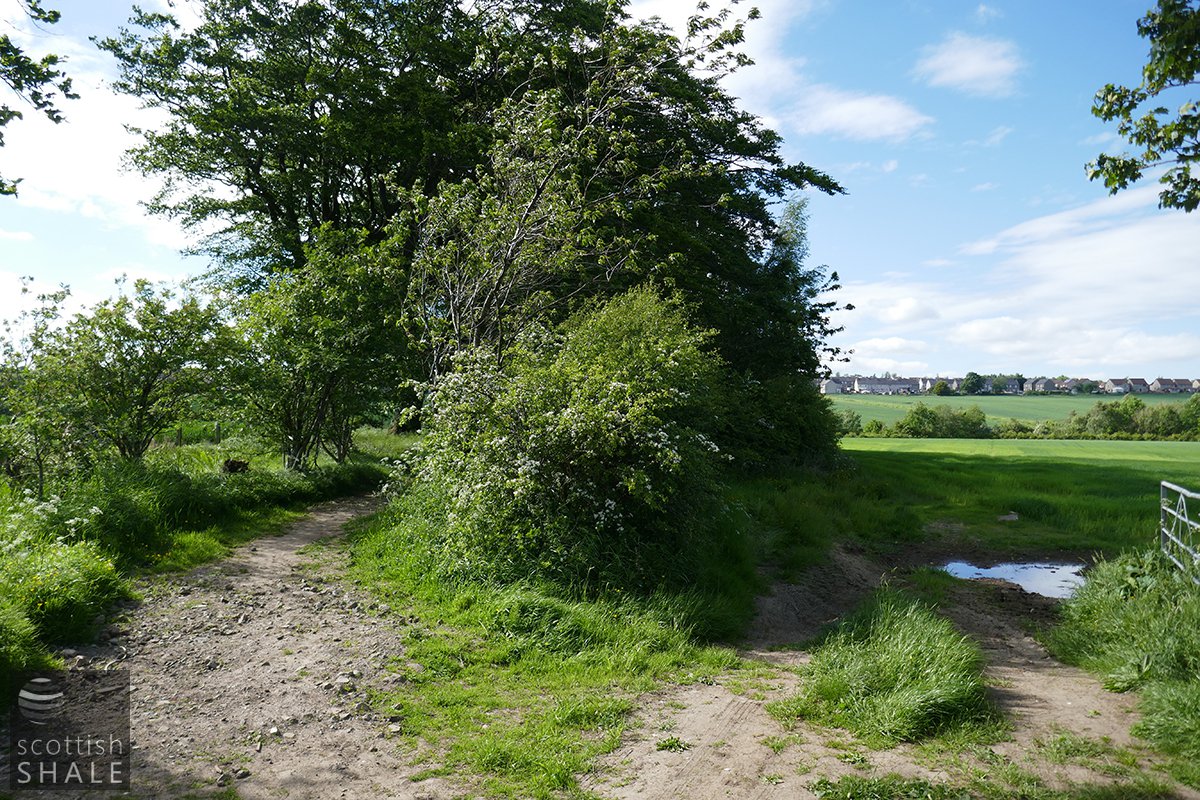 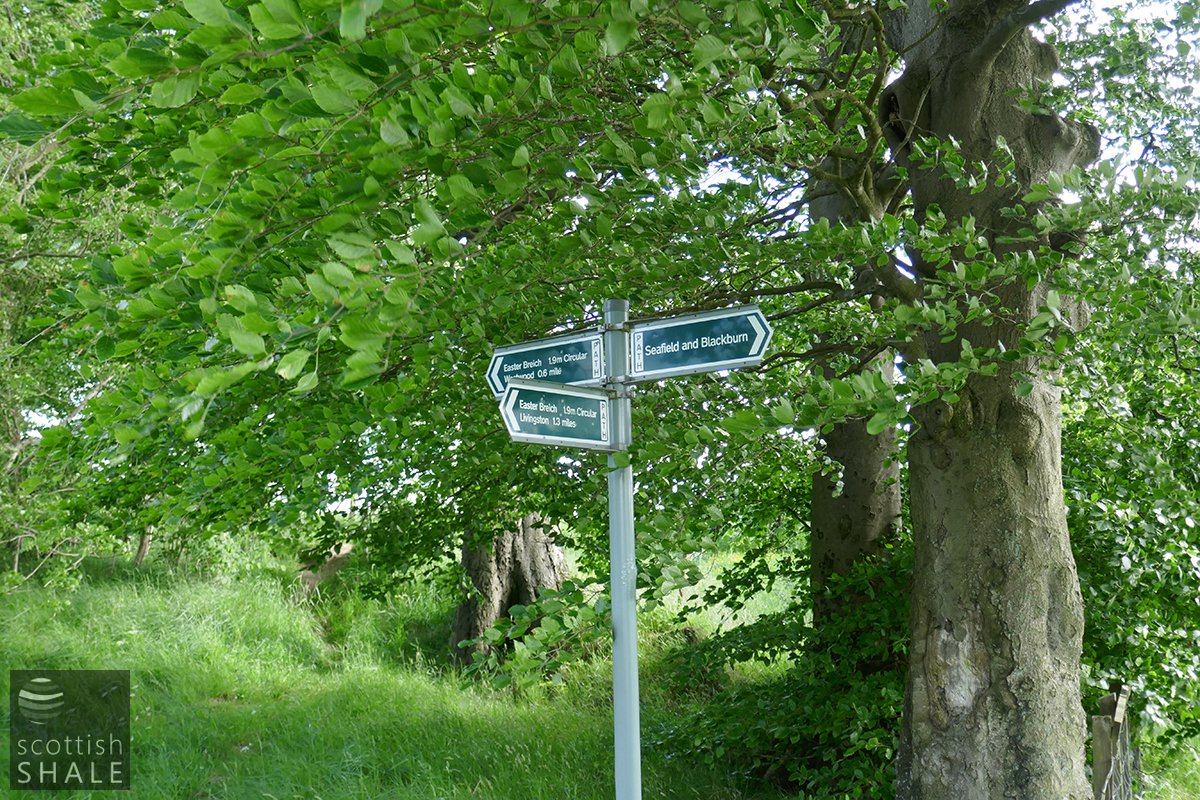 A choice of route 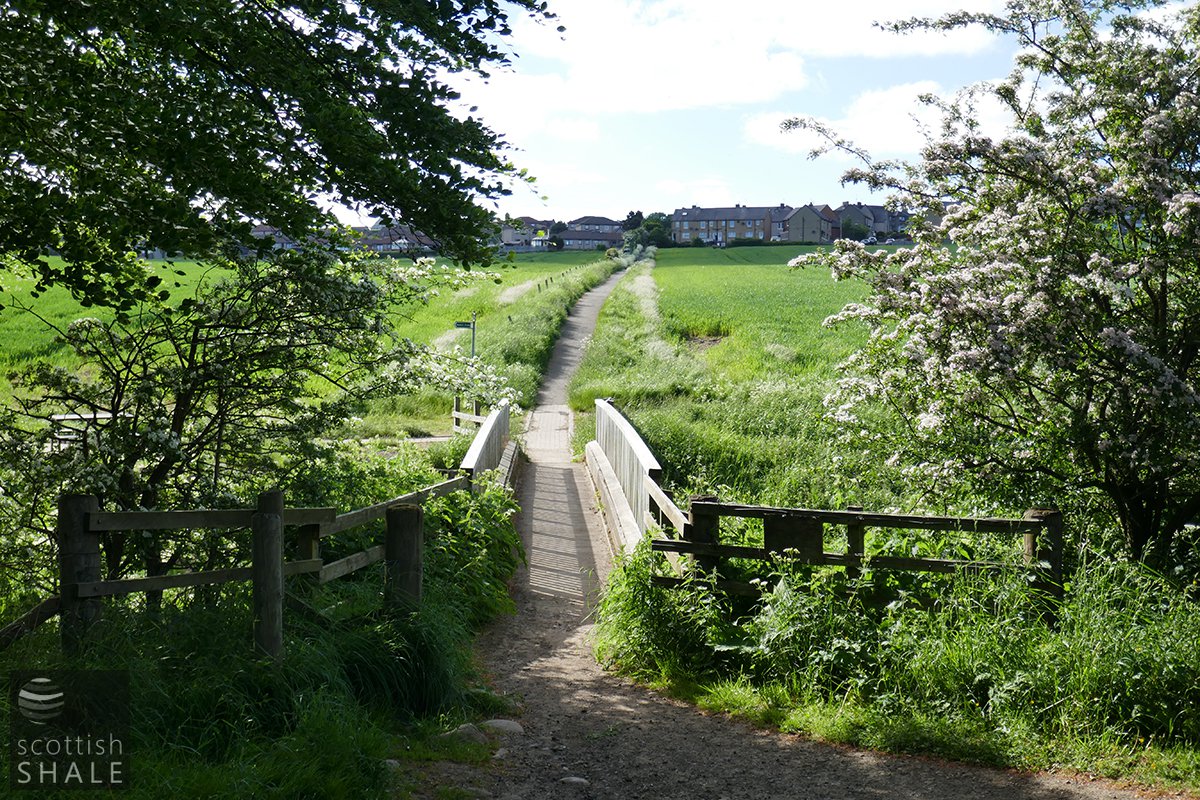 Across the bridge looking towards Seafield 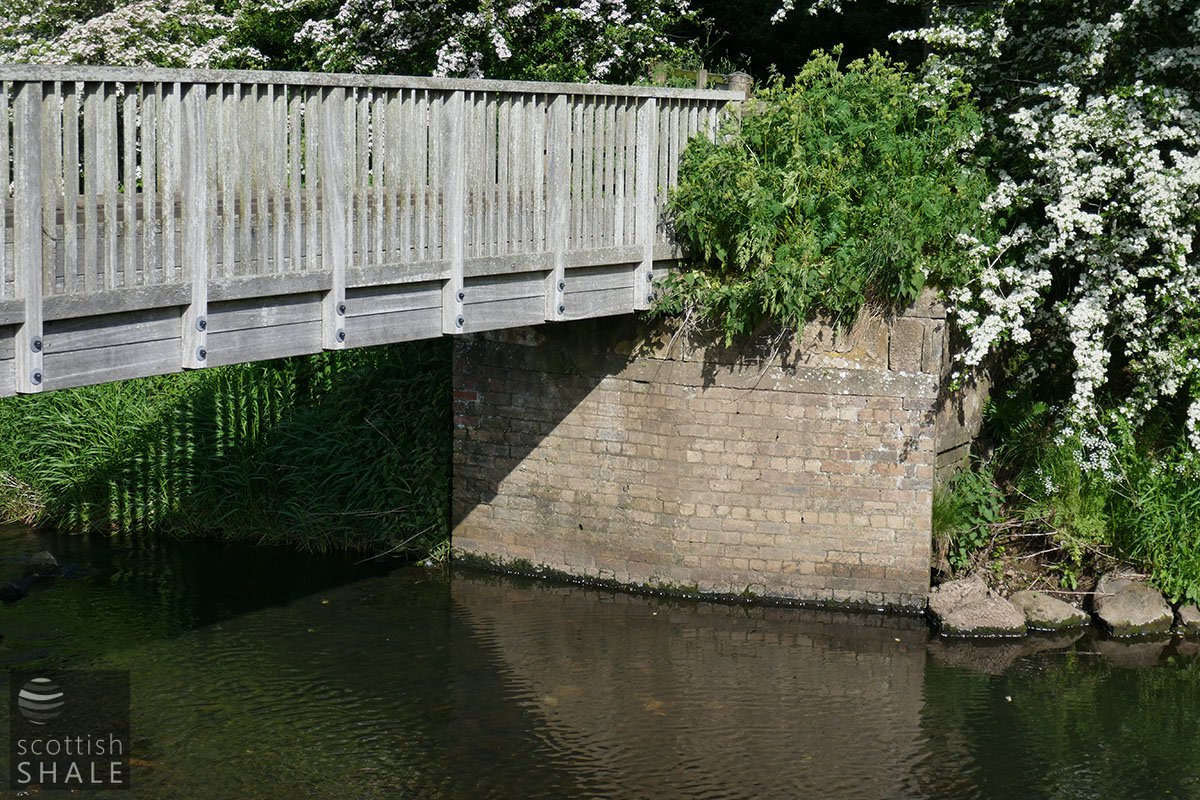 The abutments of a much wider bridge that once existed here. 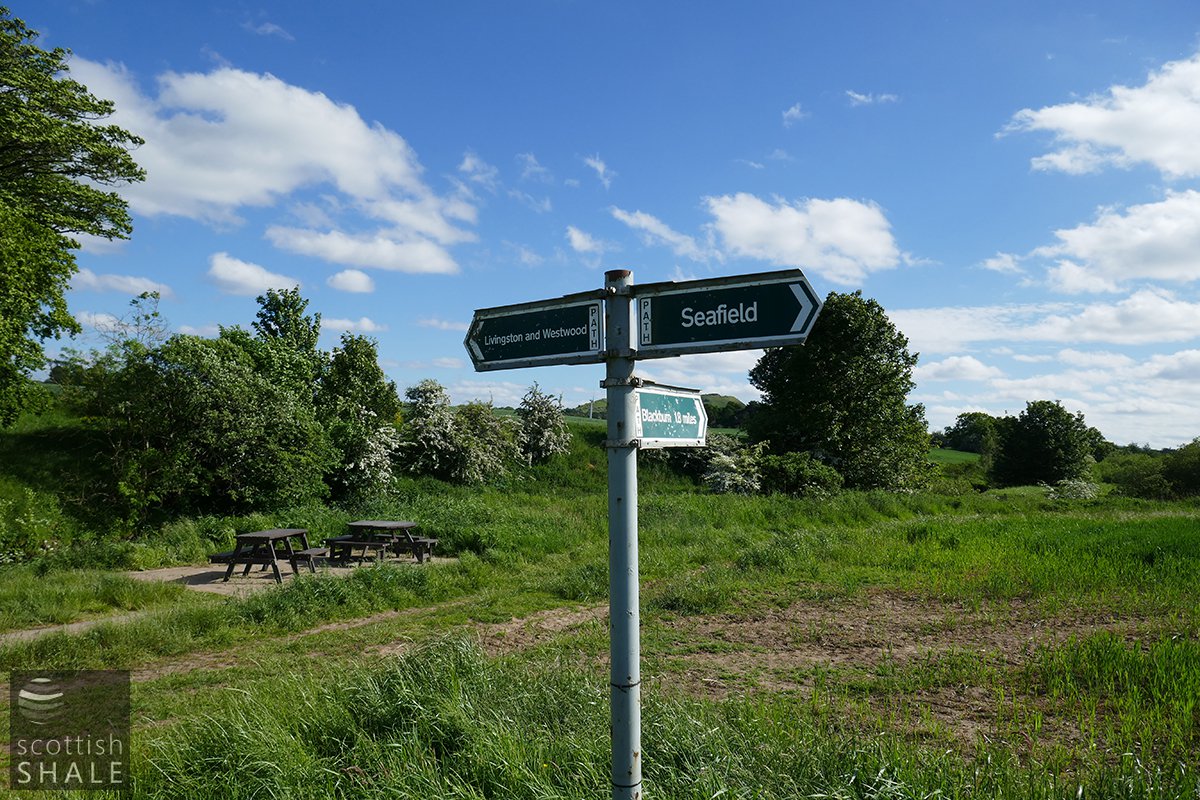 Another choice of path 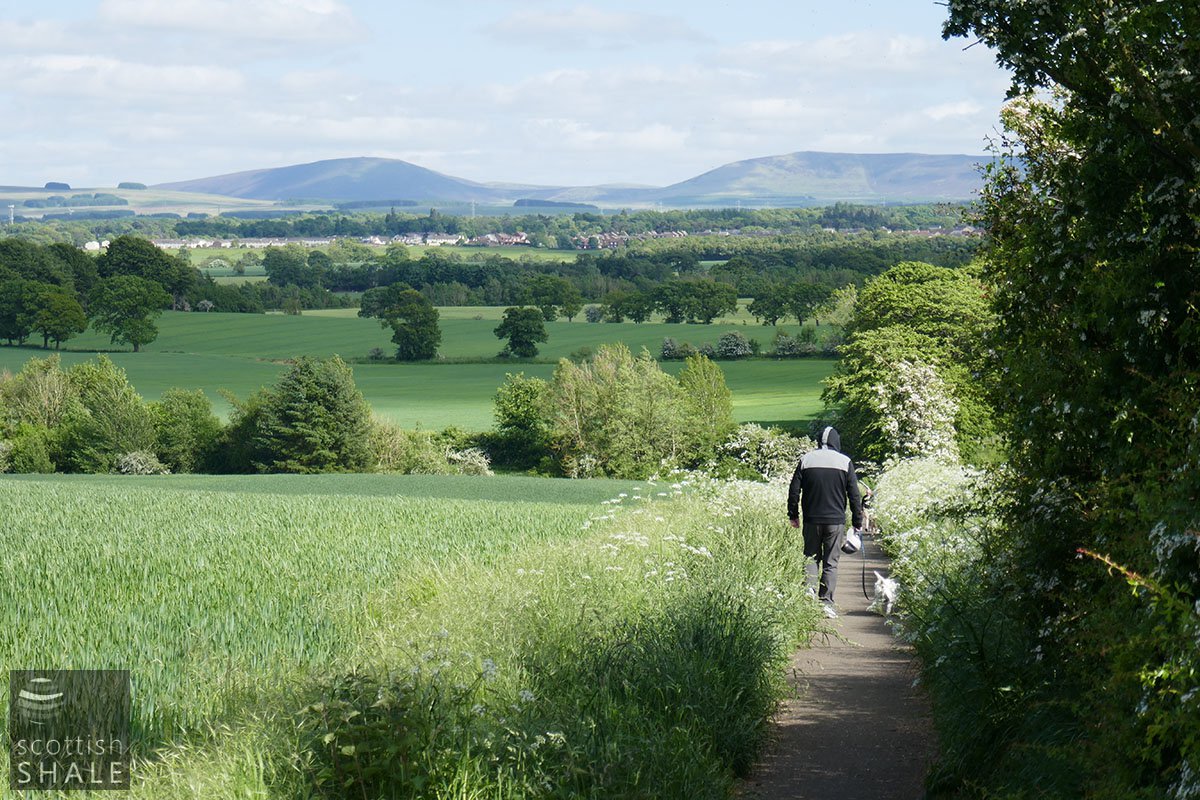 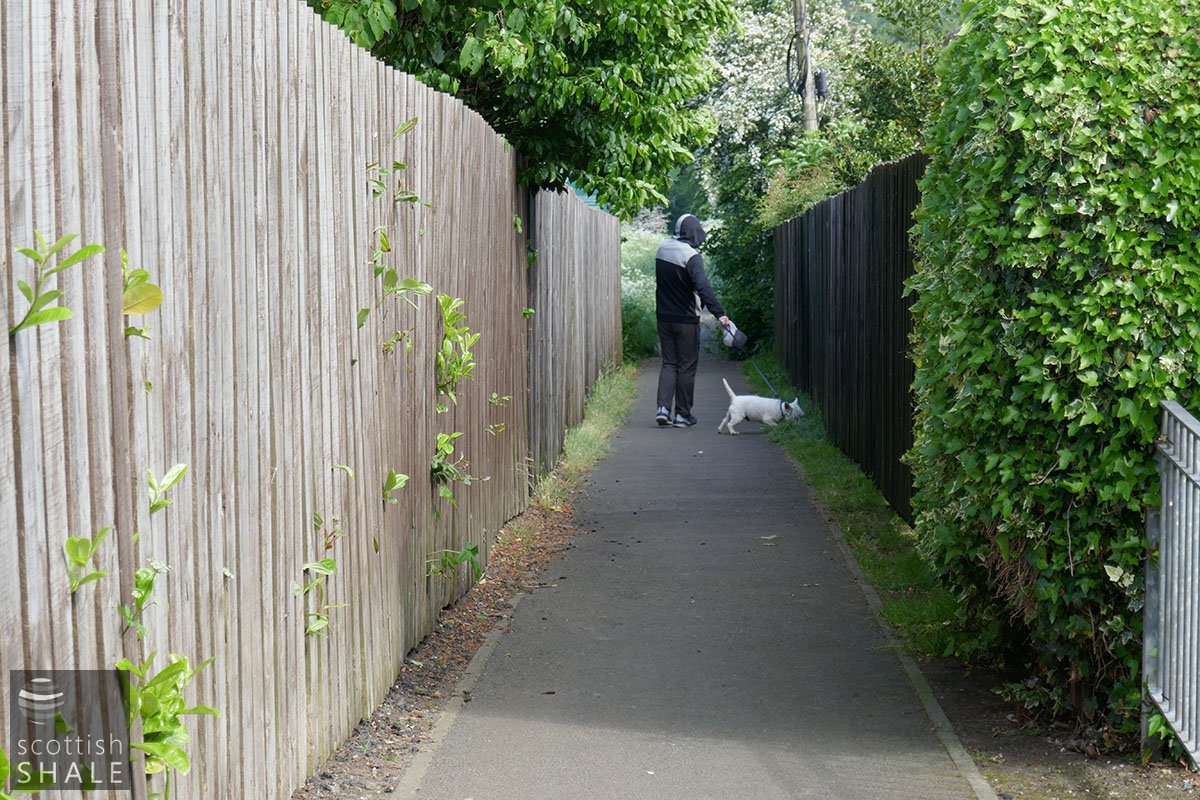 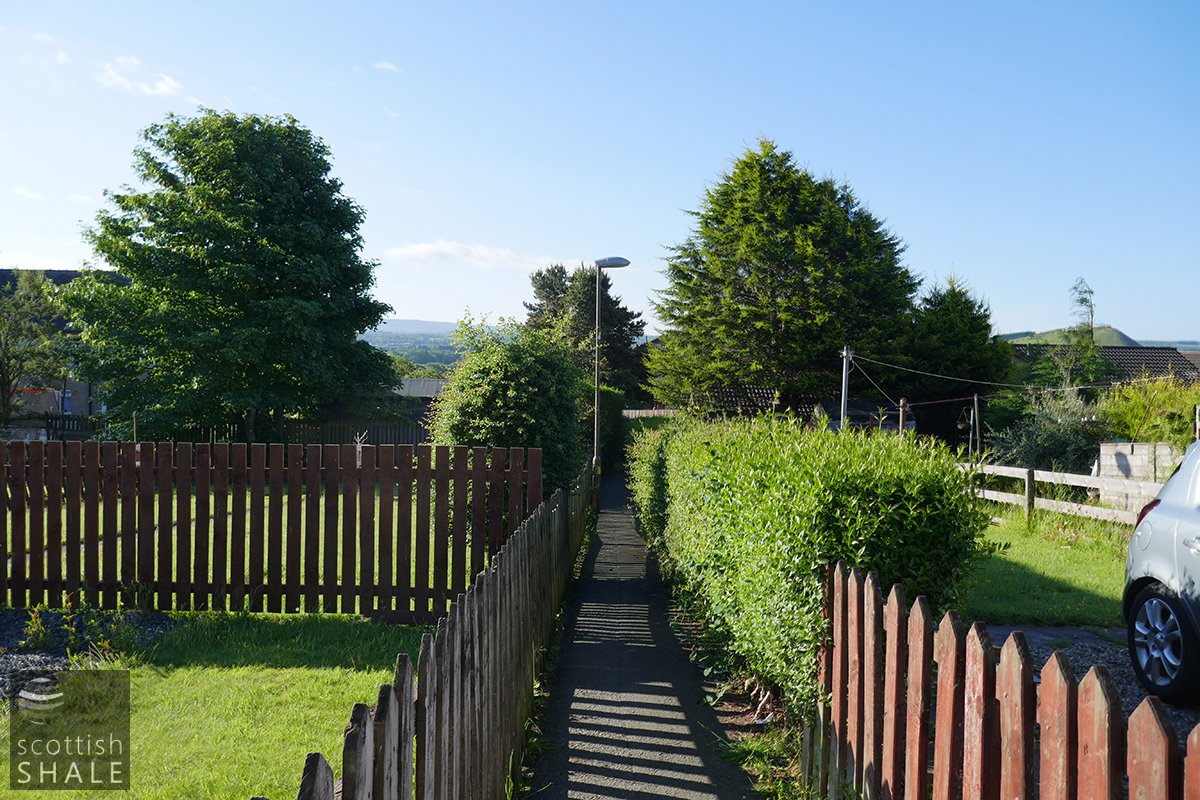 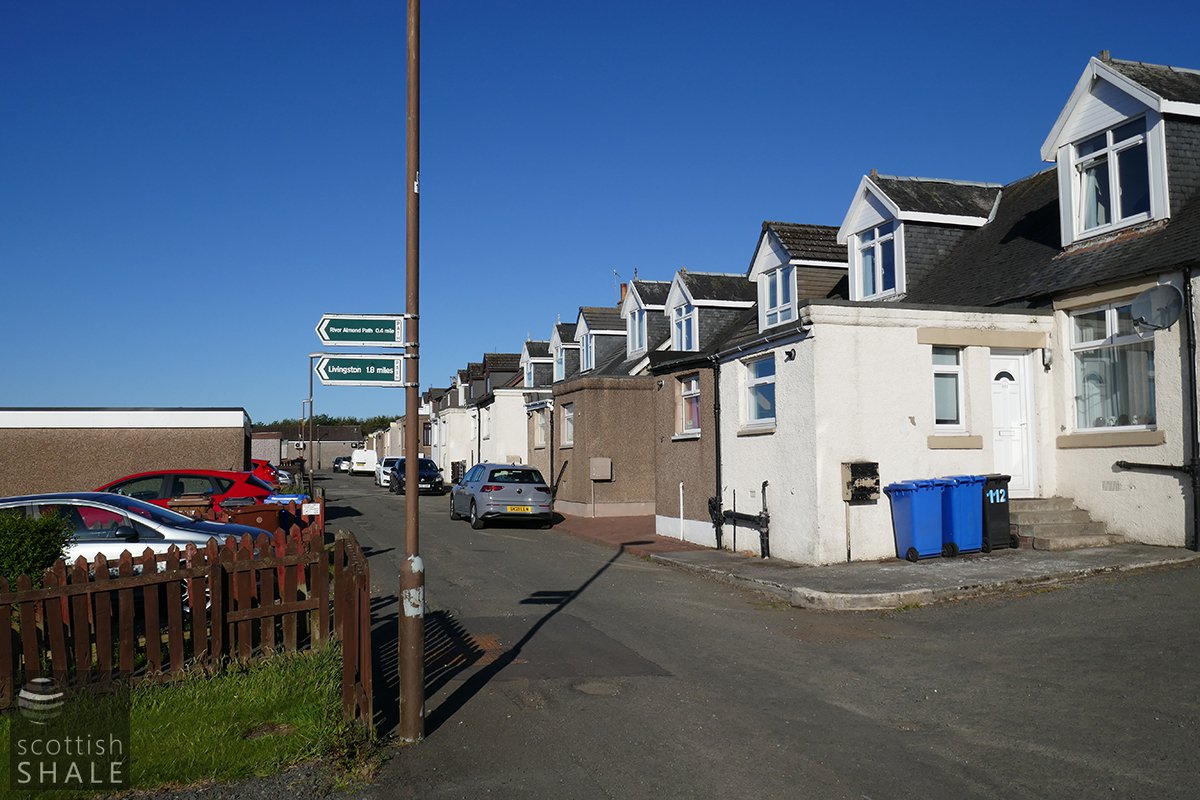