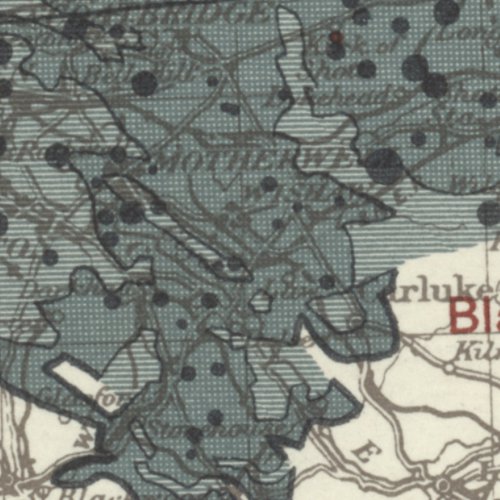 An exceptionally rich gas coal was found in the Lesmahagow area which, from the 1840's was highly prized for gas production and supplied a few oil works constructed in the area.

"Special Reports of the Minerals Resouces of Great Britain. Vol.XXIV, Cannel Coals", published by the Geological Survey in 1915" states:

"The well-known Lesmahagow Main Gas Coal, which used to be the standard of comparison in the classification of the Scottish cannels and gas coals for trade purposes, is now practically exhausted. It was extensively worked in the Crossford-Auchen­heath district, where it was locally associated with a thin blackband ironstone."

"Near Crossford the coal varies from 5 to 20 in. At Auchenheath it averaged 18 in. The Wee Gas Coal or Auchenheath Oil Coal lies 11 or 12 fms. above the Main Gas Coal. It appears to be confined to a limited area in the Auchen­heath and Blackwood district. It varies in thickness from 1 to 12 in., and has generally a band of blackband ironstone 3 to 5 in. thick at its base. It was considered a first-class gas coal, but was still more valued as a paraffin oil coal, second only in quality to the Boghead Coal."

"The oil yield is stated to have reached 95 gallons per ton. Its interest is only historic."

A cluster of short-lived oil works in Dalserf parish used the same seam of Kiltongue Musselband shale used in some works in North Lanarkshire. "Special Report..." stated "It was wrought....in the Larkhall district at Swinhill, Kittymuir, and Birkenshaw, where the yield was 23 galls. a ton."