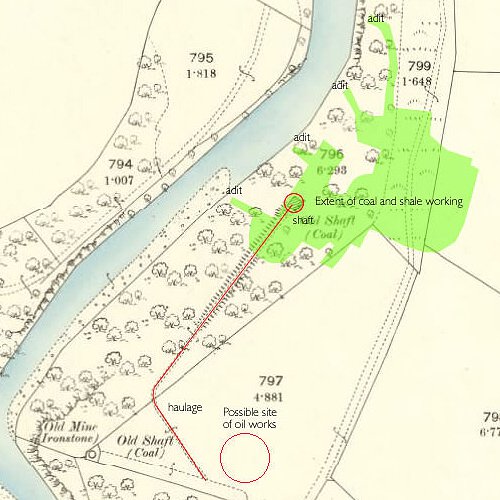 In his publication "Damn few an' they're a' died" (c. 2000); local historian John Young identifies the location of the oil works as "across from a bend in the River Avon known locally as "The Ritchies"." An inscription on the rear of a local postcard provides evidence for this. John also quotes a Geological Survey publication, referring to a location "between the viaduct and the Meetings, adjacent to Double Dykes but on the other side of the river" (i.e. in the vicinity of 55.709408, -3.969672) notes " the Musselband is also well exposed in the Avon Water, where the shales associated with it were mined on a small scale for their oil content".

Notes to British Geological Survey, Geological map - sheet No.22 (1872) makes reference (as a fossil site) to "Oil shale works, Avon water, 1/2 mile above its junction with Cander Water about 1 ¼ miles N, by E. of Stonehouse."

The 1871 census lists nine individuals with oil-related employment in Stonehouse. These include William Stewart, described as "Superintendent of Shale Works."

On the north side of the River Avon, a roadway can be traced from Millheugh Brae (55.706062, -3.983364), beneath the piers of the former Avon Viaduct to the sites of two drift mines - Kittymuir No.1 and Kittymuir No.2 - coal workings dating from the 1920's or 30's. Waste from these two mines is still apparent, but nothing in the way of brick debris or burnt shale that might indicate the site of an oil works.

British Geological Survey mine abandonment plan LSP1482 is a rough pencil sketch on tracing paper that shows an area of shale and coal workings on the south side of the River Avon. Four adits spaced about 100 feet apart are shown, extending about 500ft into the river bank. The plan notes the thickness of seams; ("Shale 17", Iron 6", Coal 6"). When this mine sketch is superimposed on the second edition OS map (c.1896) it is apparent that an "old shaft" marked on the map (55.705776, -3.971800) would pierce these workings. The map suggests that this old shaft, sited on the slope of the river valley, was linked by an inclined road or haulage to level ground in the vicinity of the present Townlands Farm. Part of the route of the haulage can still be seen as a crop mark on aerial photographs.

Available evidence suggests that the most logical and likely site of the oil works would be in the vicinity of Townlands Farm. This site would be easily accessible from Stonehouse by a roadway leading to Cochrane street in Stonehouse and crossing the railway by an overbridge.

John Young has also provided the image of an egg-ended boiler which survives in the river near "Millers Brig", and is thought locally to have come from the oil works. The authors of this website have yet to locate this boiler, but did photograph a length of riveted wrought iron pipe, or vessel, on the south bank of the river about 120m downstream of Miller's Brig (55.709079, -3.969395). Many fragments of bituminous shale occur in the river at that point.

Mapped by the Ordnance Survey of c.1898, annotated to show the extent of shale workings. 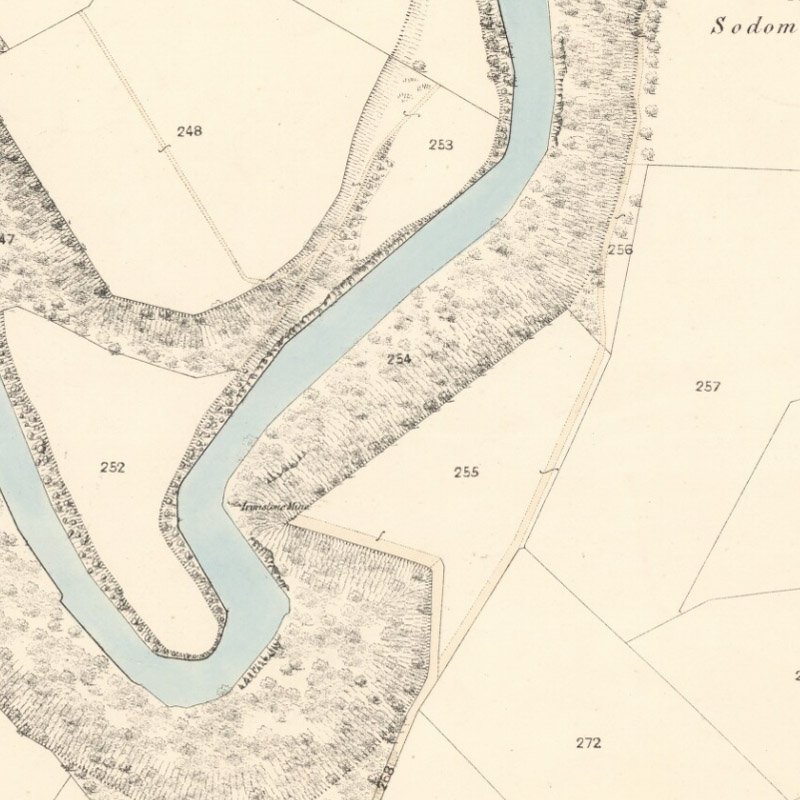 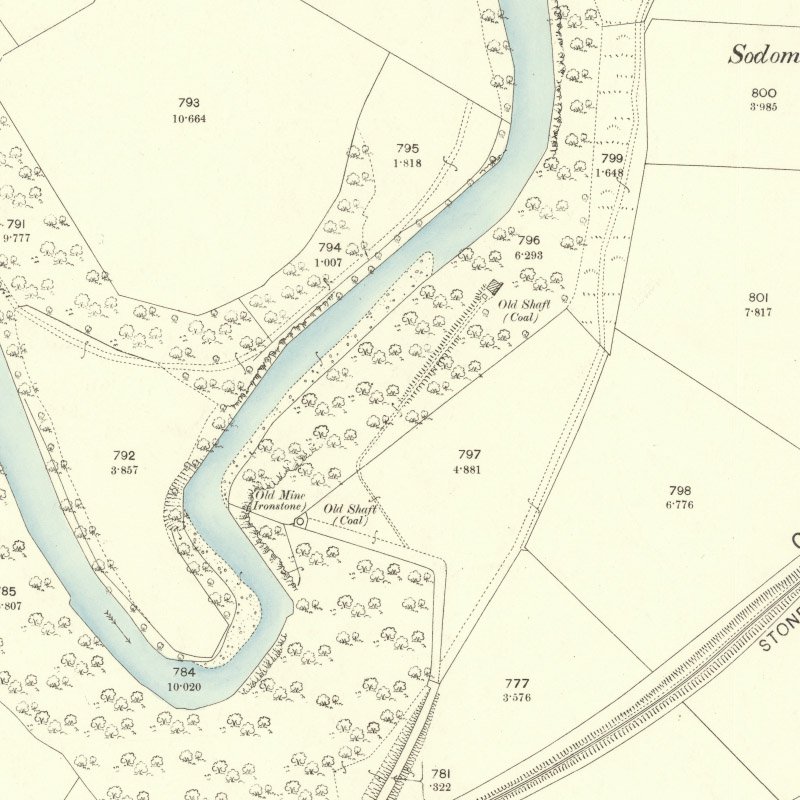 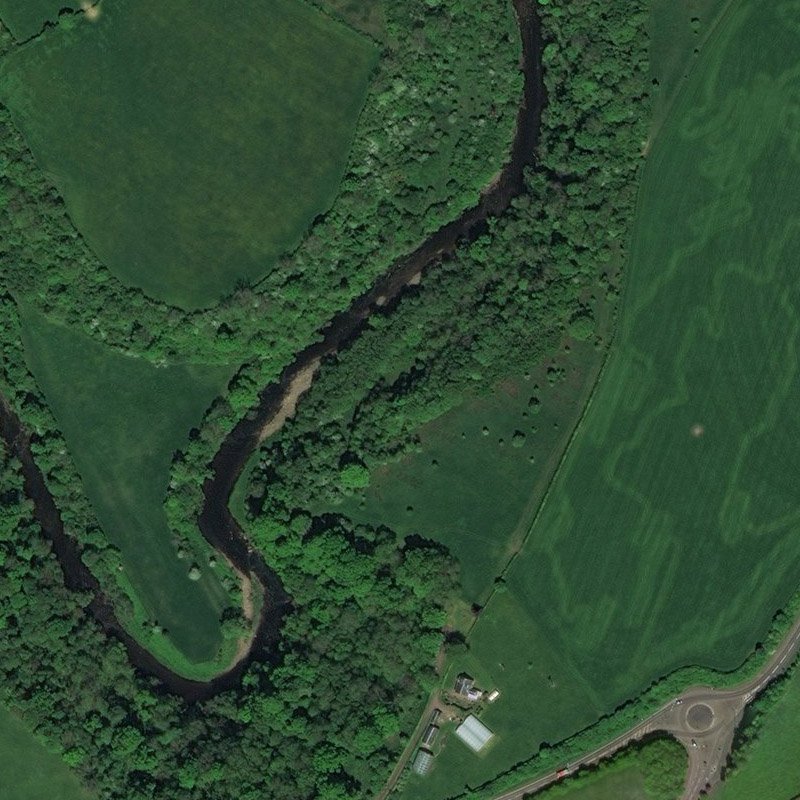 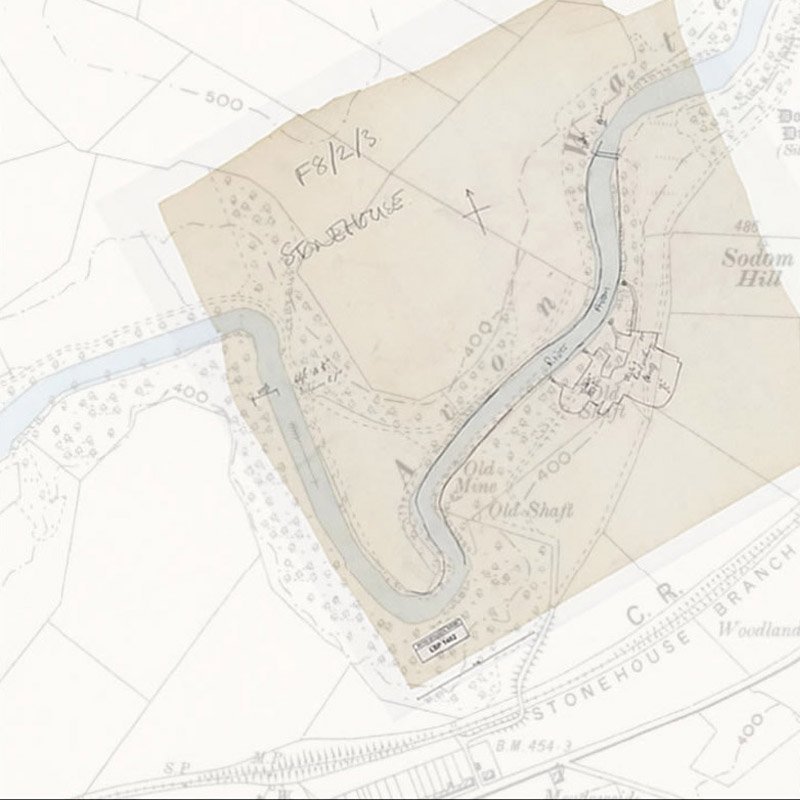 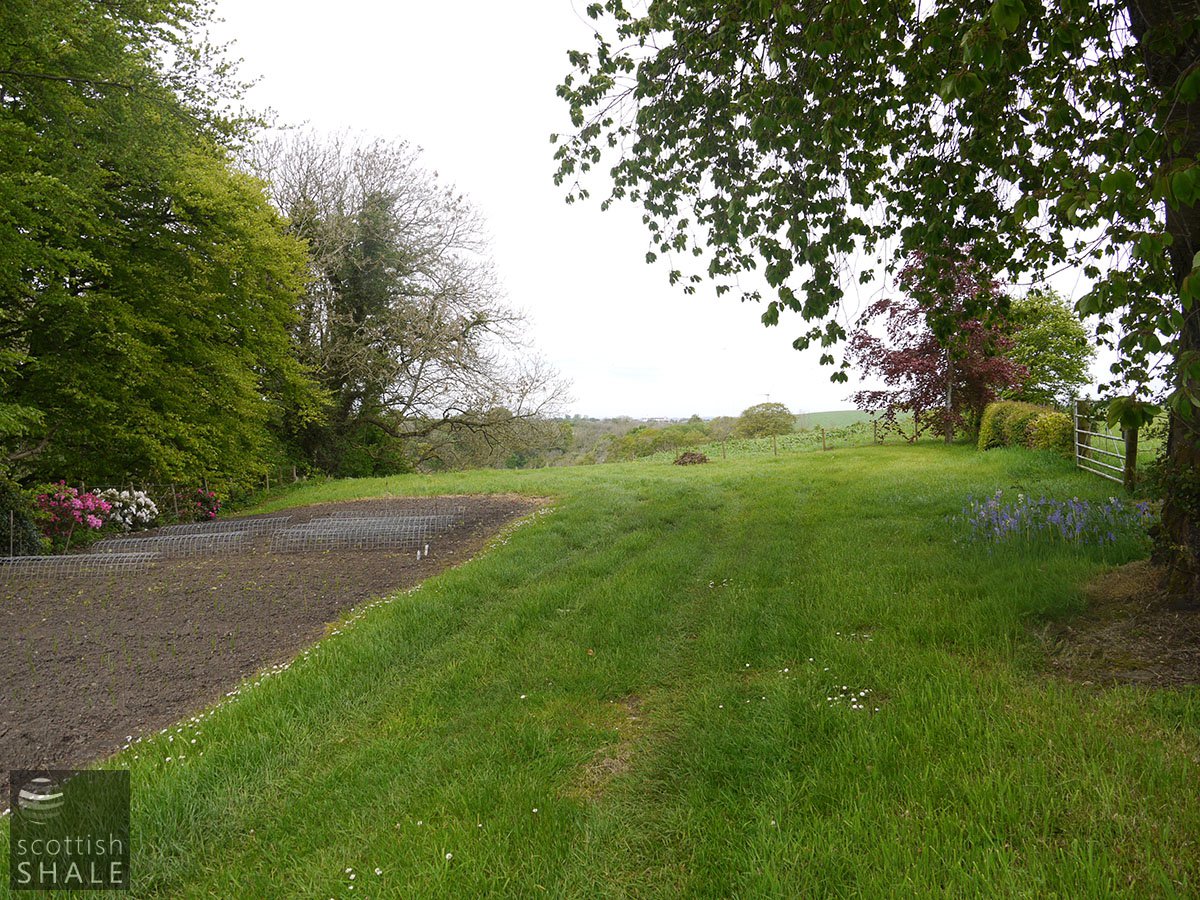 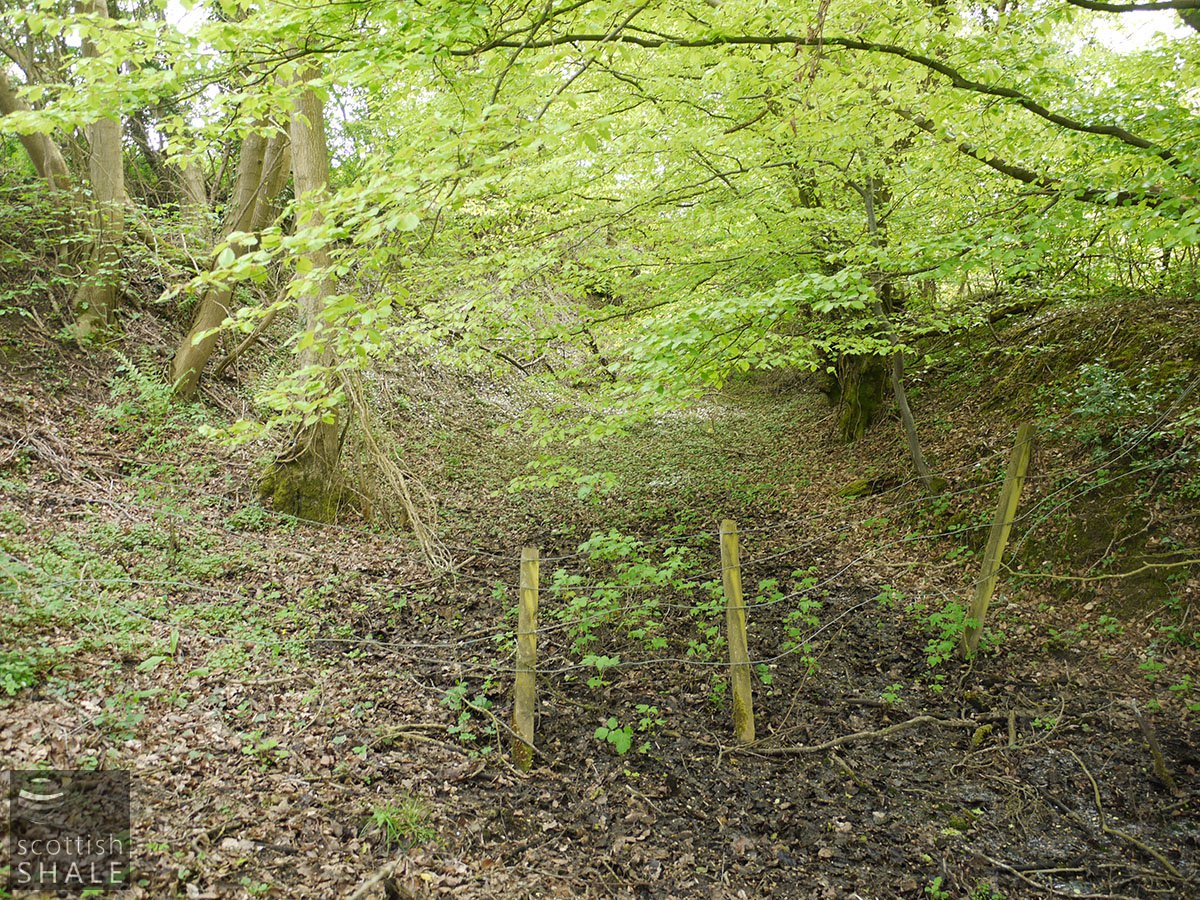 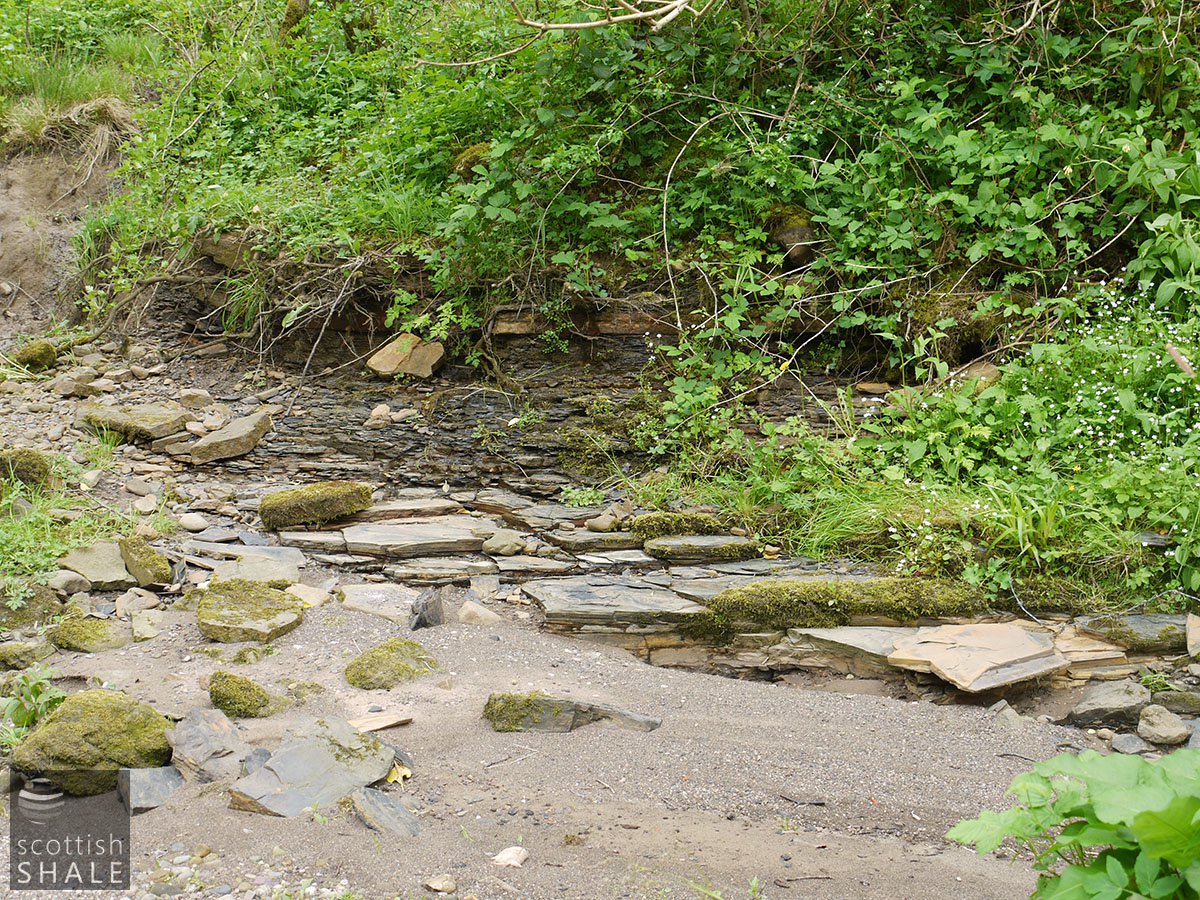 Shale exposed on the river bank, close to mine sites. June 2014.

On Sunday night or Monday morning a wooden house, used as a store at the Stonehouse Shale Oil Works, situated at Slayholm, and belonging to Mr M'Naughton. railway contractor, was destroyed by fire. The origin of the fire is unknown but it is supposed to have been caused by some cinders falling from the fire-place on to the floor. There was a considerable quantity workmen's tools in the place, which were also burned. The damage is estimated from £30 to £40.

On Wednesday boy named Robert Stewart, aged 13 years, son of William Stewart, manager, Oil Works, was drowned while bathing in the Avon. The boy had left the Oil Works, whence he had gone with his father's breakfast, about ten o'clock, had gone into the water (some yards distant) to bathe, got beyond his depth, and, not being able to swim, was drowned. News had arrived at the works about that had not returned home, and a search was immediately instituted, when his body was found in 5 feet of water.