Lesmahagow Gas Coal, a variety of cannel coal exceptionally rich in gas and oil, was mined in the Auchinheath/Auchenheath area from the mid-1840's. James Ferguson & Co., proprietor of the Auchinheath pits, supplied this coal to gas works throughout Britain, as exemplified by a court case in December 1873 in which the Gas, Light, & Coke Co. of London took action against the company for supplying inferior product.

In 1864, shortly after the expiry of James Young's patent, Ferguson's advertised the advantages of their product for oil production and offered to provide land close to their pit to persons wishing to establish an oil works. The construction of works by the Auchinheath Chemical Company was presumably a consequence of this.

Redwood notes that Auchenheath works, Lesmahagow were operated between 1866 and 1868, by J & J Baird. The Baird family were proprietors of a number of oil works in Ayrshire and Lanarkshire, and therefore seem likely to have had an interest in the Auchinheath Chemical Company. The Bairds became proprietors of the Auchinheath brick and tile works, presumably after 1870 when advertised for let by the Duke of Hamilton.

The precise location of the Auchinheath oil works is not known. The first edition OS map, surveyed in 1858, show a network of mineral railways serving various coal pits in the vicinity of Auchenheath. The coal pits shown on the map immediately south of Nethan viaduct might appear the most likely location for the oil works. At some time after 1858, thirty workman's cottages were constructed in this area. These houses, described as Auchenheath Cottages at Langlee, were advertised for sale in 1884, the advert indicating that they were currently let to the Nitshill and Lesmahagow Coal Co. 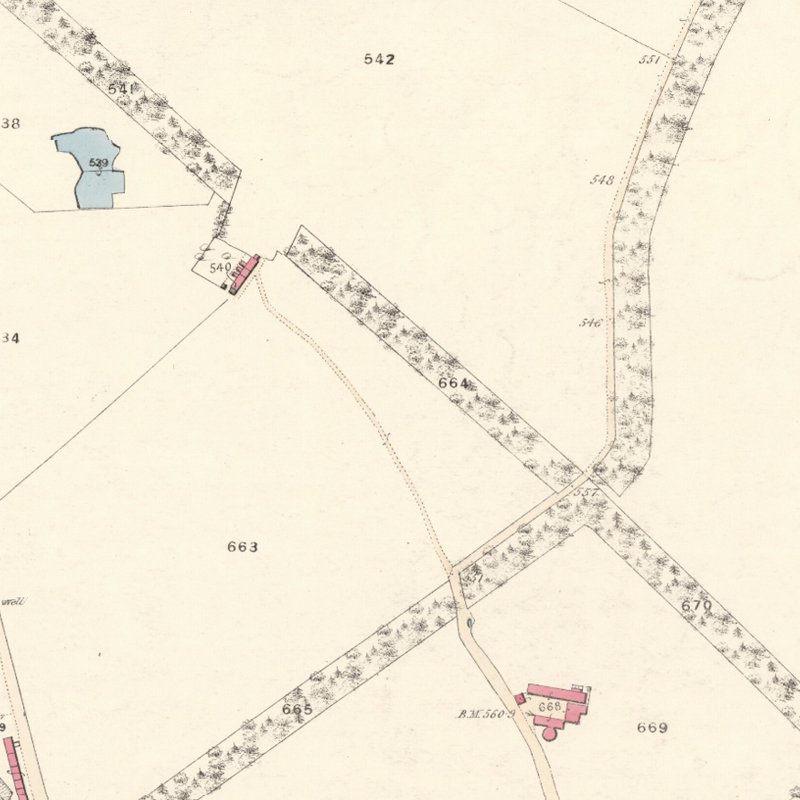 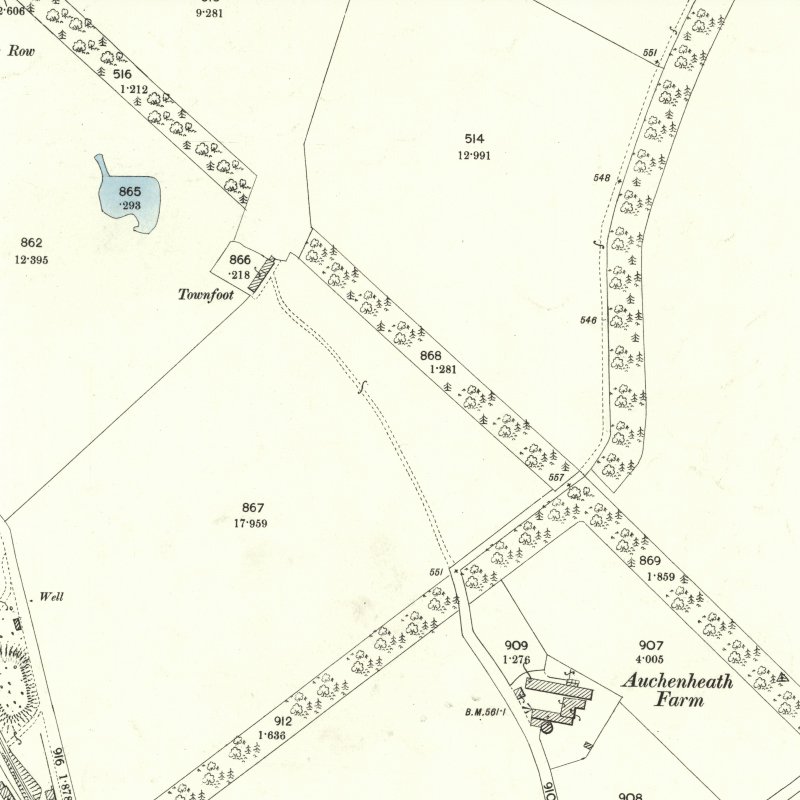 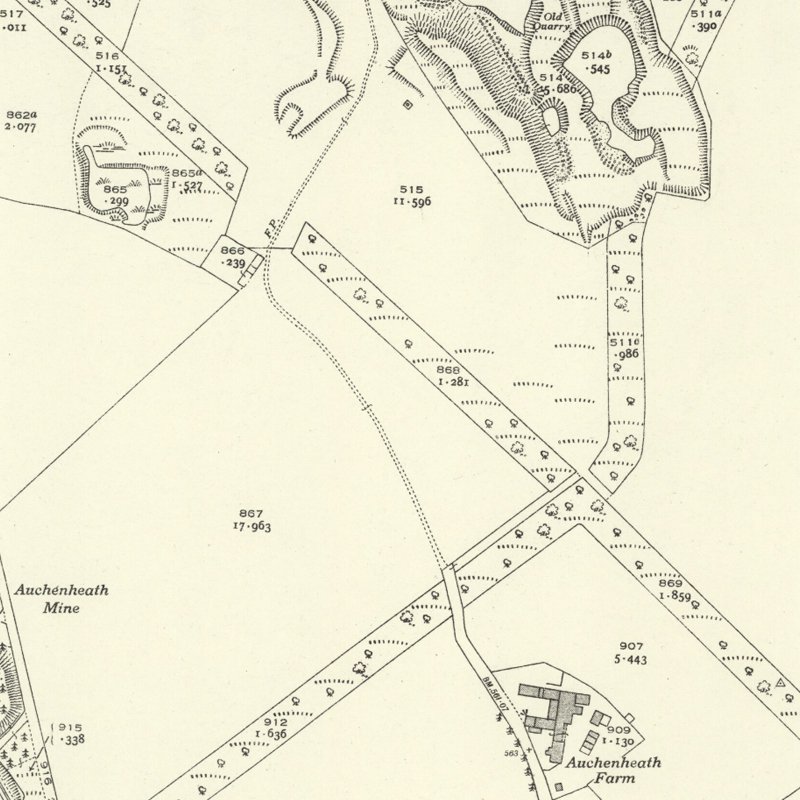 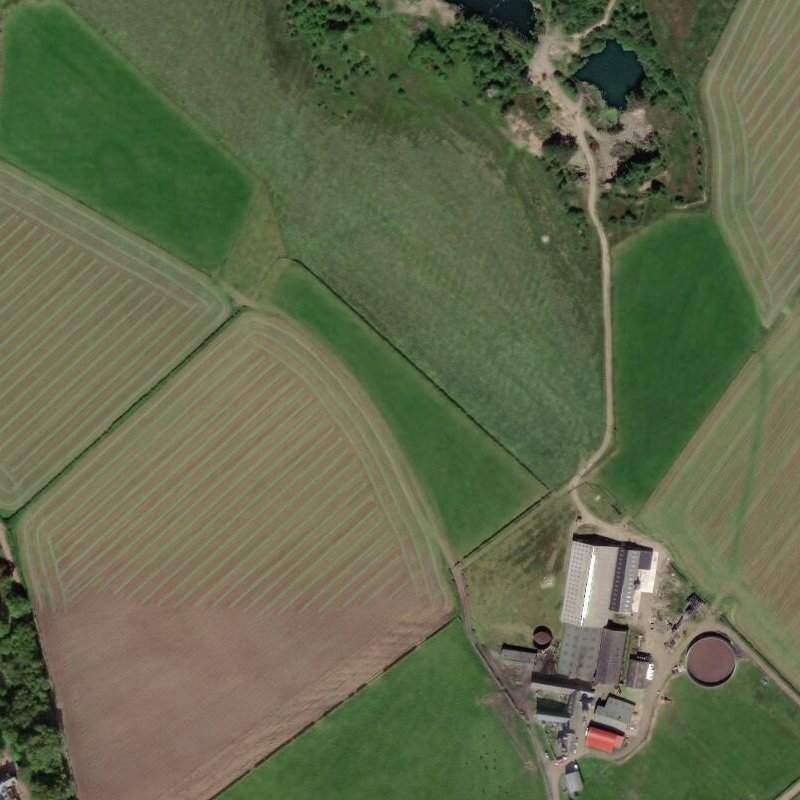 JAMES FERGUSON & CO., Auchinheath; Lesmahagow, Scotland, solicit the attention of Mineral Oil Manufacturers to their well-known LESMAHAGOW GAS COAL, and their still more Valuable LESMAHAGOW OIL COAL, as suitable mediums for the production of paraffin and other Oils. In a "Practical Treatise on Coal Petroleum, and other Distilled Oils," by Abraham Geesner, M.D., F.G.S., published in 1861; it is stated that, submitted by him " to the test of working," 96 Gallons of Crude Oil were taken from One Ton of Lesmahagow Oil Coal; and experiments recently made in this Country show that the oil Coal for such uses is 17 per cent. still more valuable. Specimens will be given on application, whereby Parties wishing to contract for a supply can satisfy themselves as to quality. J. F. & CO. are prepared to supply those Coals at a fixed price for a period of years, and Parties wishing to manufacture Oils at the Colliery can be accommodated with Ground adjoining the Railway. For additional particulars apply as above. Auchinheath, Lesmahagow, 25th July, 1864.

WANTED a MAN Thoroughly Experienced in Crude Oil from coal, one qualified to keep books preferred. To a suitable person liberal wages will given. Apply personally Auchenheath Oil Works, near Lesmahagow.

Valuable Gas Coal, Ironstone, and Limestone to be let - The COLLIERY at AUCHINHEATH consisting of several pits in active operation, is to be let, with immediate entry, for such term of years and on such conditions as may be arranged. Further particulars will be given in future advertisements. Application may be made to Stewart S. Robertson, Chamberlain's Office, Hamilton Palace; to Messrs. H & A Inglis W.S., 16 Queen St. Edinburgh; or Messrs. Jamieson & Haldane, 24 St. Andrew's Square, Edinburgh.

HUTCHISON & DIXON are instructed by the Proprietors, in consequence of the Work being given to sell, as above, the Whole PLANT, including-

Tomorrow (Tuesday) at AUCHINHEATH by LESMAHAGOW.
SALE OF OIL WORK PLANT:
35 IRON RETORTS Malleable and Cast Iron
MALLEABLE TANKS
PLATFORM WEIGHING MACHINE
CONDENSERS, TANKS, 15 Tons pipes, casks
40,000 FIRE-CLAY and COMMON BRICKS, TOOLS &c.
At AUCHINHEATH OIL WORKS, Auchinheath Station. HUTCHINSON & DIXON are instructed by the proprietors, in consequence of the works being given up, to Sell, as above, the WHOLE PLANT Sale begins at One o'clock. Train from Buchanan St. Station, Glasgow, at 12 o'clock.

The well-known Lesmahagow Main Gas Coal,which used to be the standard of comparison in the classification of the Scottish cannels and gas coals for trade purposes, is now practically exhausted. It was extensively worked in the Crossford- Auchenheath district, where it was locally associated with a thin blackband ironstone. Near Crossford the coal varies from 5 to 20 in. At Auchenheath it averaged 18 in. The Wee Gas Coal or Auchenheath Oil Coal lie 11 or 12 fms. above the Main Gas Coal. It appears to be confined to a limited area in the Auchenheath and Blackwood district. It varies in thickness from 1 to 12 in., and has generally a band of blackband ironstone 3 to 5 in. thick at its base. It was considered a first-class gas coal, but was still more valued as a ' paraffin oil coal, second only in quality to the Boghead Coal '. The oil yield is stated to have reached 95 gallons per ton. Its interest is only historic.