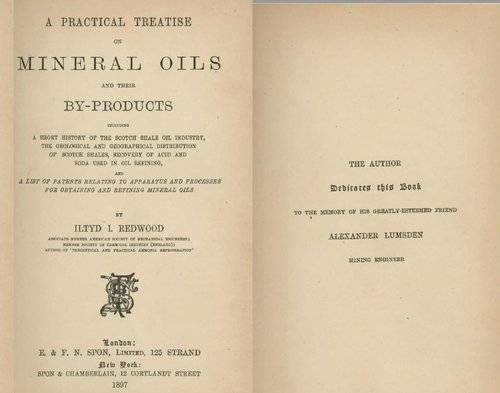 There are more than 130 locations in Scotland where crude oil was at some time produced from coal or shale, or where this crude was refined into oil products. The vast majority of these works were small scale and short lived enterprises; many the products of the Scottish "oilmania" of the late 1860's. Only a dozen crude oil works remained active by the start of the 20th century.

Iltyed Redwood's 1897 book, "A Practical Treatise on Mineral Oils and their By- Products", lists 117 Scottish oil works and notes: "...this number may possibly have been greater, as there is a liability that one or two unimportant and small works may have existed for a short time and have escaped the Author's investigations".

The book includes a table listing oil works in Scotland, their owners, dates of operation and other details, which seems to have drawn on the recollection of oil industry stalwards John Galletly and Alexander Lumsden . Unfortunately the table contains many errors that were presumably introduced when oral accounts were noted down or subsequently transcribed. This has introduced some bizarre spelling of place names, a few errors in dates, and the occasional mix-up between entries. Nevertheless the table remains a superb research resource when carefully interpreted.

Redwood's list was used as a starting point for this gazetteer and various research has attempted to identify the location of the listed sites and verify them through reference in other historical documents. This process identified some duplication of locations on Redwood's list, and left a handful of sites unidentified or uncorroborated by other sources.

Tables from "A Practical Treatise on Mineral Oils an their By-Products"; see full publication LVSAV2010.005 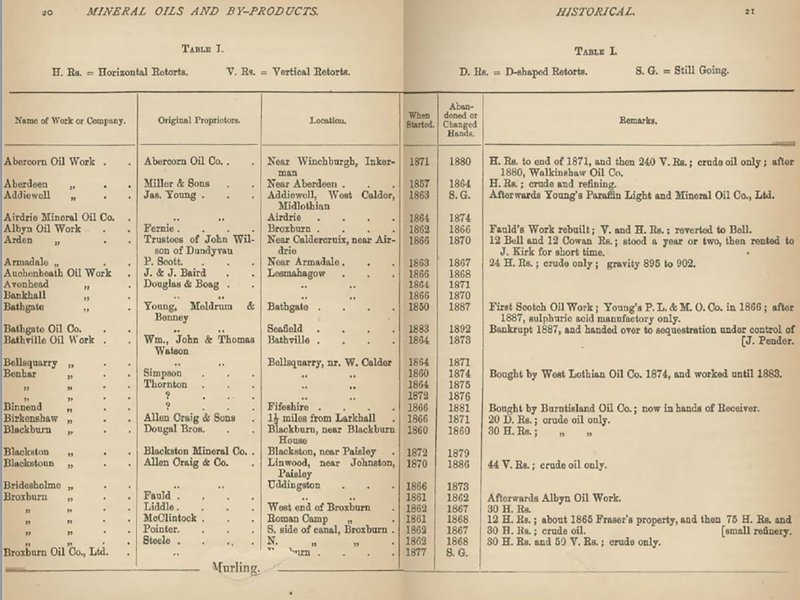 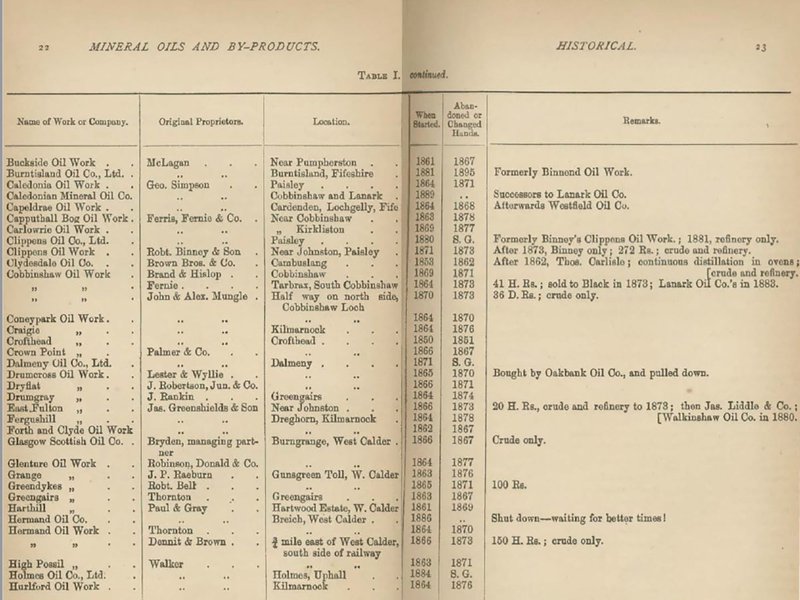 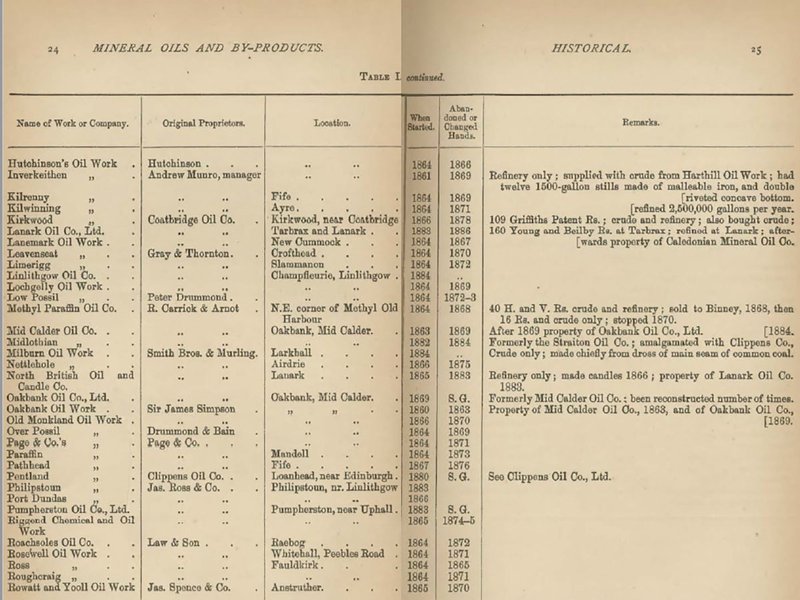 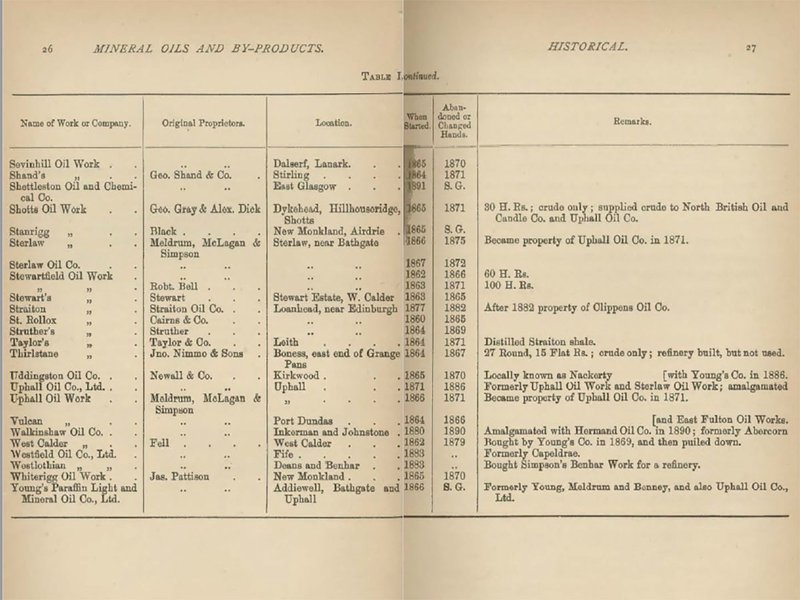 Research also revealed a number of likely shale or coal oil work locations that were not listed by Redwood, although some care is needed to differentiate these sites from the broader activities of the oil trade. Scotland had an advanced oil and chemical industry long before James Young's discoveries. Oil works, mainly in the east coast ports, processed whale, seal and fish oil to produce lamp fuels, candles and lubricants. In numerous oil mills, seeds were ground to extract oils used as lamp fuels, paint solvents, and for culinary purposes. Oil and tallow works, often built close to slaughterhouses, produced a range of oils, candles and greases, whilst the by-products of the gas industry were refined to produce tars, benzole, naptha and other solvents. All of these industries continued in parallel with shale and coal oil production during the Victorian era, as did a growing trade in imported crude petroleum and mineral oils. Use of the terms "paraffin" or "shale" is usually sufficient to distinguish shale or coal oil operations from the activities of the wider oil trade; in most cases however further evidence is available to justify inclusion of a site in this gazetteer.

In some areas of the Scottish coalfields, seams of coal shale and cannel coal were used to produce oil. Often these shales were worked along with seams of coal and would otherwise be discarded at waste. Most coal-oil works were small-scale and short-lived enterprises, and all had closed by the 1890's 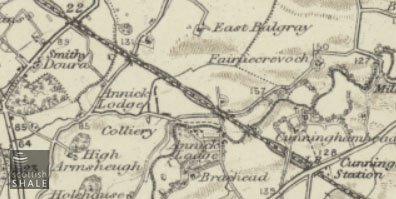 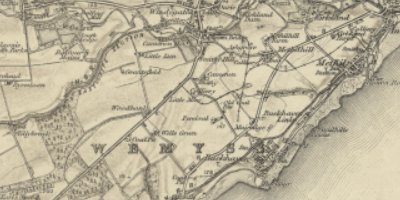 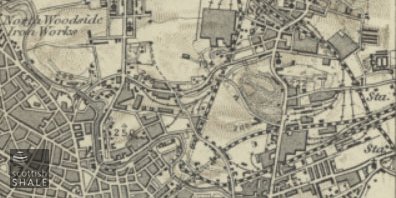 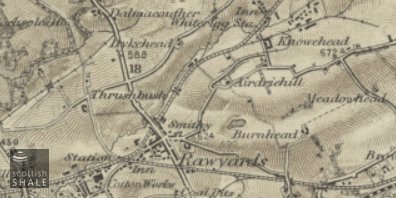 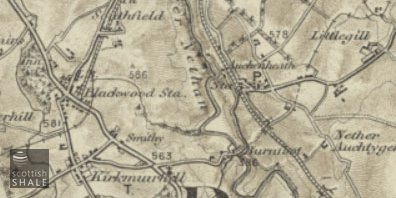 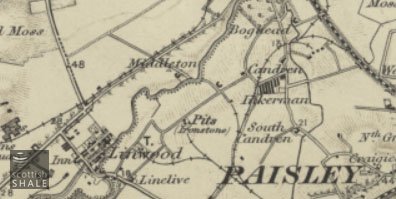 Redwood in his 1897 book " A Practical Treatice on Mineral Oils and their By-Products" lists a 117 Scottish oil works and refineries. A small handful of these have yet to be identified including:

Redwood simply states that Bankhall was active between 1866 to 1870. No further clues exist as to the location of Bankhall

Redwood lists the proprietor as "Geo. Simpson", the location as "Paisley" and the years of operation as 1864 to 1871. This might conceivably relate to the Caledonian Oil Company Works, associated with George Simpson whose crude oil works at Benhar supplied Mandal Oil Works. There is no known link to the Paisley area however.

Redwood lists the proprietors and Page & Company, and the period of activity from 1864 to 1871. (Might this relate to the partnership of Palmer and Page (James Palmer & Company), who briefly operated Drumcross Paraffin Oil Works?)

Redwood note the proprietors as "Struther", active between 1864 and 1869. This might relate to Stand Oil Works, listed in valuation rolls between 1866 and 1872 as owned by James Struthers & Co.

Redwood lists a "Capputhall Bog Oil Work"; proprietors Ferris, Fernie & Company;, located "near Cobbinshaw" and active between 1863 and 1878. This entry raises many problems:

Redwood's table of oil works is notorious for its geographical misspellings and substitution of place names, but entries usually prove to have some historical substance. It seems very unlikely however that an oil works near Cobbinshaw, or Drumcross, or anywhere else could have operated for fifteen years without leaving any other trace in the historical record. Until other evidence comes to light, it might be supposed that this entry was an error; a jumble of information relating to a number of other extinct oil works. Perhaps Redwood was distracted from his labours by the White Lady of Capputhall Bog?

References from The Edinburgh Gazette still to be resolved:

WALTER MACKENZIE, Accountant in Glasgow, Trustee on the sequestrated estates of THOMAS WALKER KING, Oil Manufacturer and Merchant in Glasgow, sole Partner of the Firm of ARCHIBALD LIDDELL & COMPANY, Oil Manufacturers and Merchants there, as such Partner, and as an Individual, herebyintimates that his accounts, brought down to the 19thcurrent, have been audited by the Commissioners, and that they have postponed the declaration of any further dividend until the recurrence of another statutory period. WALTER MACKENZIE, Trustee. 66, St Vincent Street,Glasgow, November 20, 1865.
Edinburgh Gazette 21st November 1865

NOTICE OF DISSOLUTION. THE Copartnership between the Subscribers, under the Firm of WALLACE & DUYCK, as Shale Oil Manufacturers, has this day been DISSOLVED by mutual consent. February 18, 1867. EBENEZER WALLACE. J. E. DUYCK. JOHN M'INNES, Witness. ALEXR. COCHRAN, Witness.

This notice of dissolution of shale oil manufactures Wallace and Duych has been a puzzle for some time, as it doesn't relate to any known oil works. Thanks to Mr J.E. Duych's unusual surname, something of his history can be traced through the on-line British Newspaper archive. We first encounter Jacque Edouard Duych of Old Kent Road London in 1841 when he patents improvements for manufacture of vinegar. Two years later, when working as a foreman at an oil refinery, he is declared insolvent. There's then a dissolved partnership in 1846 in a firm of oil purifiers and another in 1851 in a firm of sod oil manufacturers (?). Now known as James E Duych he pops up again in Kent in 1860 in charge of an oil seed mill. A newpaper accounts describes how the hand of a 14 year old boy employed at the mill was amputated by machinery, but reassures readers that "every care was taken of the poor fellow by direction of Mr Duych, the kind-hearted proprietor of the mill". Further patents for improving manufacture of seed cake and expressing oil from seeds were followed by a futher period of insolvency in 1860.

Some time after that, Duych seems to have travelled to Scotland seeking a fortune in the oil industry. He is listed amongst guests at the launch of a steamer in 1864, his address being given as "The distillery, Inverkeithing". 1867 sees the dissolution of his shale oil business, followed by further patents for James R. Duych of Glasgow concerned with utilising mineral oils and, in 1870 for improvements in treating mineral oils. Then all goes quiet.... except for an advertisement ten years later in the Glasgow Herald; "FRENCH – Madame Duych had resumed teaching, Private classes at her residence, 8 Park Street."

THE Subscriber, Peter Forbes, retired as on the 20th day of November last, from the Copartnery of PETER FORBES & COMPANY, carrying on Business as Paraffin Oil Makers and Manufacturing Chemists at Port-Dundas Oil Works, Port-Dundas, Glasgow; and the Business will in future be carried on by the other Subscribers, under the Firm of The PORT-DUNDAS OIL COMPANY, who will receive payment of the debts due to, and discharge the debts due by, the Firm of Peter Forbes & Company. PETER FORBES. JOSEPH TOWNSEND. JAMES BURGESS READMAN.

During the course of research, several companies or sites have been identified that are not included by Redwood, but might be involved in the production or processing of Scottish shale or coal oils. To warrant inclusion in this gazetteer, evidence is required that coal or shale was retorted, or that crude oil from coal or shale was refined, at these sites. Businesses concerned with merely the blending, refining, or marketing of coal or shale oil products are not included, nor those involved exclusively in the refining of imported petroleum or other types of oils.

Sale of the sequestered estate of Avondale Oil Works, advertised in The Scotsman of 18th June 1887, lists cast iron stills, cooling tins and filters, suggesting the company was involved in the processing of wax products rather than crude oils.

The following advert appeared in the Fife Herald on several occasions during 1863. Ballingry lies close to the site of Capeldrae Oil Works.

CHEMICAL WORKS, BALLINGRAY. Subscriber is now disposing of an excellent Substitute for Rosin Oil, suitable for Trams and all Pit purposes, at 12s. per Cwt. Excellent FRICTION GREASE may also be obtained at 12s. per Cwt. All Orders received at the above Works will be carefully attended to. THOMAS LEITCH. Lochgelly, June 19, 1863.

Listed in report on the sale of heritable property appearing in Glasgow Herald on 23rd March 1873 (upset price £1,000), realised price £1,450) and the following sale notice which suggests a trade restricted to the refining of waxes and greases.

"The Dean Tavern; a Gothenberg Experiment", published by Dean Tavern Trust in 1986 and reproduced on the website www.prestoungrange.org, states "The Dean Oil Works was a firm belonging to Charles Handyside employed in the extraction of oil from coal for industrial purposes". Dean Oil Works was sited immediately north of Lady Victoria colliery (55.864259, -3.068277) and is marked on the 1907 and 1914 OS maps, although not that published in 1932.. The Scotsman of 16th May 1902 provides an account of a fire "at the extensive establishement of Messrs C.H. Handasyde & Company, Dean Oil Works, Newbattle". This describes "the contents of the refineries to be largely made up of wool oils, stearine, and other products", suggesting trade links with the borders textiles industry rather than the nearby collieries. The Scotsman account also mentions that considerable stocks were held at the company's other establishment - the Abercorn Oil Works in Paisley.

No record has yet been located of oil works directly associated with the company's ironworks and collieries. However, a court case (Procurator Fiscal of Airdrie vs. Merry and Cunningham), reported in the Glasgow Herald dated 4th December 1868, mentions John Nish as "Manager of Merry and Cunninghame's pits ar Woodhall". Valuation rolls for Woodhall Oil Works list "Nish, Gibb & Co." as owner, suggesting a possible link between Merry & Cunninghame and oil production at Woodhall.

Messrs Merry & Cunninghame (Limited) were proprietors of a number of Renfrewshire pits that produced shale as well as coal and ironstone. Such shale was sold to local oil producers, but no evidence has yet come to light to suggest that they operated an oil works of their own in the Paisley area.