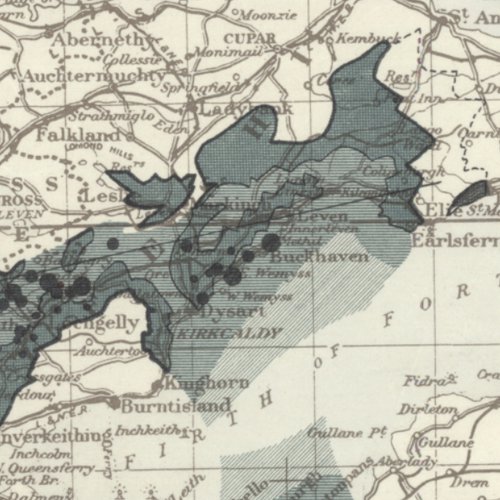 The coalfield of Fife contained a variety of coal shales that at have some time have been used to produce oil. Many of these were described in "Special Reports of the Minerals Resouces of Great Britain. Vol.XXIV, Cannel Coals", published by the Geological Survey in 1915" which includes the following references:

"At Muiredge, near Pitcorthie, 2 miles north of Anstruther, a compound seam of true oil-shale, blackband ironstone, and irony parrot coal was worked for a short period about the year 1870. The shale portion yielded from 20 to 25 galls. of oil of good quality per ton. Work was abandoned owing to the failure of the local supply of cheap fuel. Of recent years search for more remunerative seams was made by boring in the same district, but without success."

"The Lochgelly Parrot Coal contains intercalations of cannel, occasionally up to 3½ ft. thick, but as a mle the thickness is between 1 and 10 in. The yield of oil is about 34 galls. per ton; sulphate of ammonia: 57 lbs. per ton. The Lochgelly Ironstone, over most of the Lochgelly field is a compound seam of blackband ironstone and shale. The shale varies up to 16 in. in thickness, and where richest, has given up to 32 galls. of crude oil per ton."

"The Capeldrae Parrot Coal, not far below the position of the Calmy Limestone, has long been known as a first-class cannel. It is typically developed in the Capeldrae-Lochore basin, and was systematically worked in the latter half of last century. The more readily accessible portions are supposed to be worked out, but many of the pits were abandoned before exhaustion on account of difficulties due to water. The cannel was sold for the enrichment of gas, and was not used as an oil producer. The seam consisted of two leaves up to 1 ft. 6 in. and 1 ft. 8 in. respectively, of different quality, the best giving on distillation from 70 to 81 galls. of crude oil per ton. The second quality yielded from 41 to 65 galls. "

"The Lower Dysart Coal contains a band of cannel varying in thickness from 0 to 5 in. It is rich in oil of good quality-up to 90 galls. per ton. The coal is of inferior quality. Probably corresponding to the Lower Dysart Coal, a seam of coal, at Westfield, north of Auchterderran, is underlain by a bed of oil-shale from 2 ft. 4- in. to 3 ft. 9 in. thick. It was worked for oil-making for a few years in the sixties and again in the eighties of last century, with a yield of crude oil varying from 18 · 5 to 30 galls. per ton. As the field has not been tested by boring beyond the vicinity of the workings, it is not possible to make an estimate of the reserves, but the seam may possibly extend over the whole of the Kinglassie Coalfield, or about 3 square miles. The Pirnie or Earl David Parrot extends over an area of 3 to 4 square miles between West Wemyss and Leven. It also has an unproved extension under the Firth of Forth. Its thickness varies between 1 ft. 2 in. and 4 ft. 6 in. From 1864 to 1868 it was worked at Pirnie and retorted for oil at Methil. The quality of oil was good and the yield from 28 to 74 gallons per ton, with from 30 to 36 lbs. of ammonium sulphate per ton."