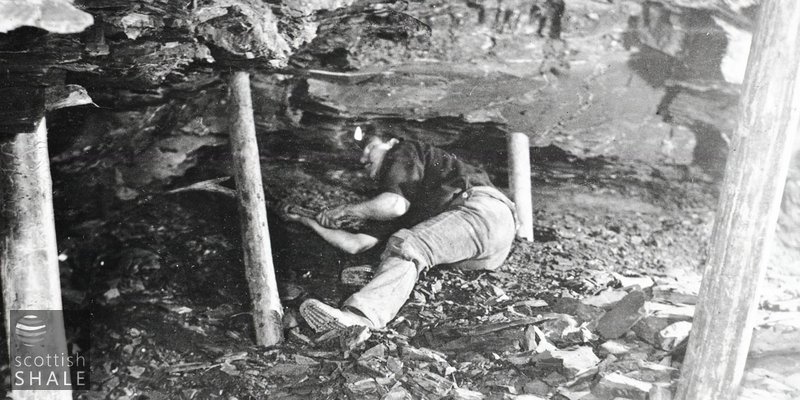 Oilshale was mined by undercutting the bottom of the shale face, drilling series of shot holes in the shale face and progressively bringing down sections of the face with a series of explosions.

Shale miners or facemen were contractors paid on a tonnage basis. The faceman employed one or more drawers who were normally paid a fixed wage out of the faceman's earnings. The facemen would often employ their son or brother as their drawer.

As well as paying their drawers, facemen had to use some of their earnings to pay for and maintain their graith or "toolkit" which included a mash hammer for setting roof props and hammering wedges, a drill and drill bits for drilling shot holes to insert explosive charges, explosive charges and a pick for dislodging and breaking the shale after it had been loosened with explosive charges.

The Board of Trade Census of Wages conducted in 1886 records that shale miners earned between 27s 0d and 32s 0d per week, the average being 28s 11d. The report states that "Nearly all miners and drawers worked about 46 to 49.5 hours per week, reckoned from bank to bank. Some worked 60 hours in 1885, but since then their hours of labour have been reduced to 48."

In 1925, the Report of a Court of Investigation Concerning the Wages Position in the Scottish Shale Oil Industry, records that an average 5.55 day week was worked by miners with around 7.5 hours per day spent underground. Average weekly earnings were £3 19s 3d.

By 1958, an Agreement Between the Scottish Shale Oil Companies and the National Union of Shale Miners & Oil Workers records that miners earned a minimum of 34s 8d per shift although, as piece workers, their actual earnings were normally considerably higher. They worked an average of 40.5 hours per week over an 11 day fortnight.