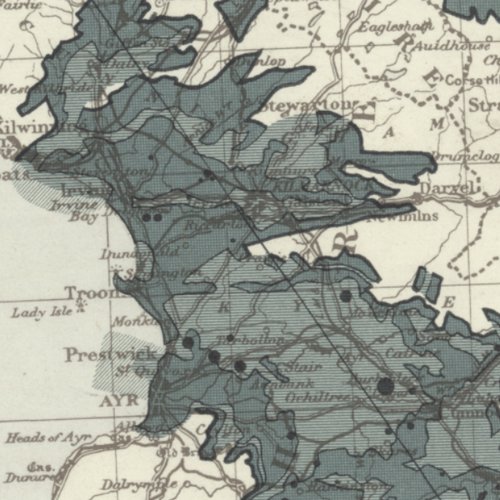 Oils shales found in the Kilwinning and Irvine areas were used in a number of small oil works that operated between the 1860's and 90's. These shales are described in "Special Reports of the Minerals Resouces of Great Britain. Vol.XXIV, Cannel Coals", published by the Geological Survey in 1915

"Cannel coals or oil-shales occur at the following horizons, in descending order, in the Coal measures of northern Ayrshire

"At Auchenharvie, to the east of Saltcoats, the Ell Coal consists of 15 in. of free coal underlying 10 in. of 'parrot,' and the seam was at one time been locally known as the Little Parrot. The cannel is, however, of local occurrence, as it does not extend as far as Kilwinning, nor has it, so far as is known, been found on this horizon in any other part of northern Ayrshire."

"The Parrot Shale, or Shale Coal was in former years the most important seam in northern Ayrshire from the point of view of distillation of oil. It was wrought, and oil works were erected for its treatment, between Stevenston and Kilwinning, at Fergus­hill (near Montgreenan), and in the neighbourhood of Doura and Annick Lodge. The Annick Lodge oil-works, the last in operation, was closed down about 15 years ago. Ammonium sulphate was obtained as well as oil, but the latter was only from 14 to 20 galls. per ton, and had to be taken to a Lothian refinery. Even under these adverse circumstances the enterprise was financially a success."

"Where best developed, the seam consists of about a foot of shale, overlying a similar or somewhat greater thickness of free coal, which is a good steam coal at Fergushill. The horizon is clearly indicated in a good many bores, which have been put down between the Doura and Annick Lodge area and Kilmarnock, and it has been worked to some extent in this district, but close to Irvine it is probable that the seam has been largely destroyed by igneous intrusions. East of Kilmarnock, though the coal can be recognised in places, the shale seems to be absent. Analyses of the shale give from 24 to 31 per cent. of volatile constituents, with from 44 to 59 per cent. of ash. A recent test of the material from Fergushill gave 54 galls. of crude oil per ton, with 49.9 lbs. of sulphate of ammonia, while another from Annandale, near Kilmarnock, gave 37 galls. and 20 lbs. respec­tively. There is, undoubtedly, a large area of this seam to work, as none of the past workings have been very extensive."

"The Parrot Coal is known by that name from Saltcoats to some distance cast of Irvine, though further east it is named the Splint, or forms the upper part of the Hurlford Main Coal. Where it is called the Parrot it very commonly contains a band of cannel coal. The ' clach ' is an inferior parrot, replaced in some sections by ' daugh ' or by clay. The parrot was formerly used for gasworks, though in some workings it has been left under ground for a long time. An analysis of this portion from Fergushill gives 37.10 per cent. of volatile matter: with 12.39 per cent. of ash."

"The Linn or Linnie Bed is a thin coal which occurs a few fathoms above the Parrot Coal, or top of the Hurlford Main, over part but not all of the North Ayrshire Coalfield, and in some places contains cannel. A sample of the latter from Gauchalland gave 34·20 per cent. of volatile matter, with 12·31 per cent. of ash. The presence of cannel in the Major Coal appears to be rather exceptional, 'though a foot of it occurs in the upper part of the seam at Burnbank, and a layer of cannel from the Major at Gauchalland gave 34 · 24 per cent. of volatile matter, with only 2 · 72 per cent. of ash."

"A black bituminous shale almost constantly overlies the Tourha' Coal, through the whole of northern Ayrshire, and measures from 3 ft. to 8 ft. in thickness. An attempt at distilla­tion was made some 40 or 50 years ago at Hurlford, but though 30 galls. of oil per ton are said to have been got, the venture does not appear to have been a success. An analysis of the shale from Windyedge Pit, west of Kilmarnock, gives 14·06 per cent. of volatile matter, with 57 · 96 per cent. of ash. A cannel is occasionally found about a fathom below the McNaught Coal. A gas coal in the Coal Measures was wrought long ago at Adamhill, on the northern margin of the Mauchline basin. The outcrop is shown on the six-inch Geological Survey Map (Ayr 23), but no details have been obtained with regard to this occurrence."

In 1883 it is recorded that Ayrshire produced a modest 4,929 tons of shale. Many of the oil works in North Ayrshire were operated by the Baird family, either individually or as John and James Baird, who were also associated with oil works in the Lesmahagow area. John Barr of Ardrossan also had interests in the North Ayrshire oil industry and in Coneypark oil works in Stirlingshire. It seems that much of the crude oil produced in Ayrshire were transported to works in West Lothian to be refined.

A sample of this shale, representing the entire product of the seam, gave on examination the following results :— The shale inclines to brownish black, with slight lustre and brown streak ; fracture highly slaty with some small nodules of ferric carbonate; cross fracture angular and partly semi-conchoidal, with slight deposits of calcic carbonate ; moderately cohesive, but very compact ; thickness of seam, 6 in. ; mean specific gravity, 1.515
This shale is easily distilled, and yields a moderate volume of 30-36 candle gas. It is very dry, and the foul gas contains a moderate percentage of impurities. Compared with Main Lesmahagow cannel coal, represented by 100 (calculated on the basis of a production of 13,000 cubic feet of gas and 1,535-5 lb. of sperm value per ton, and having regard also to the value of the .secondary products, and the cost of the purification of the gas), this shale is equal to 56.27.