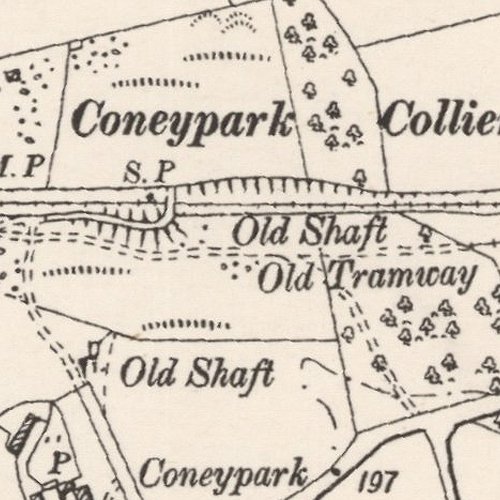 Redwood noted that Coneypark Oil Works operated between 1864 and 1870.

A narrow seam of bituminous shale was worked along with common coal in the Coneypark pits and retorted to produce crude oils and grease. The oil works operated intermittently during the late 1860's and early 70's, then lay derelict for a period until efforts were made to re-start the works in 1878. The oil works appear to have been dismantled in 1884. John Barr, proprietor of the Coneypark collieries and oil works had extensive mineral interests in Ayrshire, and may have been associated with some of the oil works that operated in Ayrshire.

First edition OS plans show a variety of "old coal pits" in the vicinity of Coneypark farm. Many additional "old shafts" labelled "Coneypark Colliery" are marked on the 1897 OS map, indicating a further phase of coal working during the second half of the 19th century. It might be imagined that the oil works was located close to one of these coal pits.

Mapped by the Ordnance Survey of c.1896. The site of the works would be in the centre of the map. 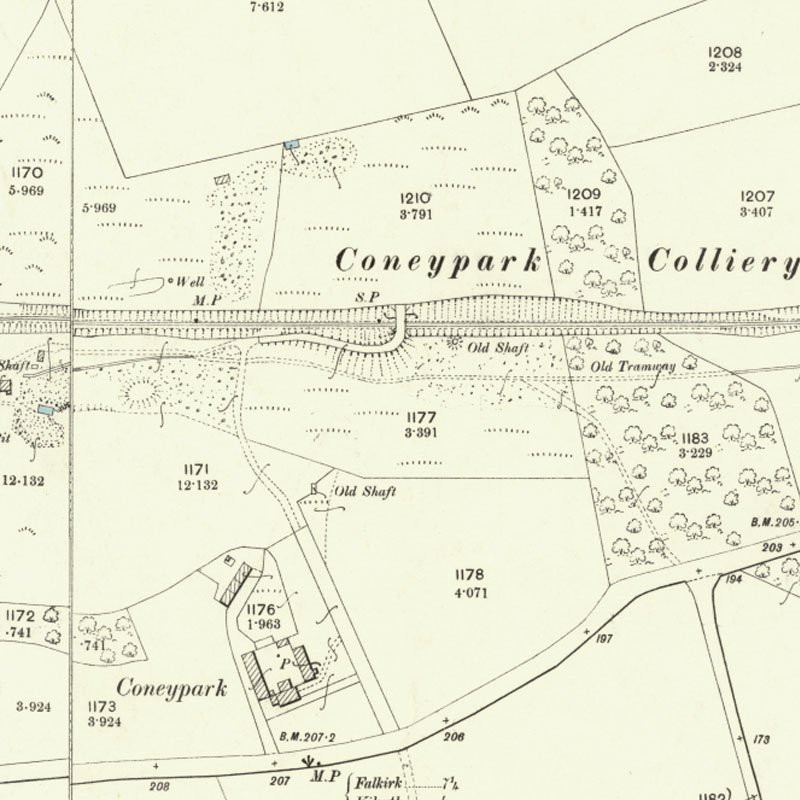 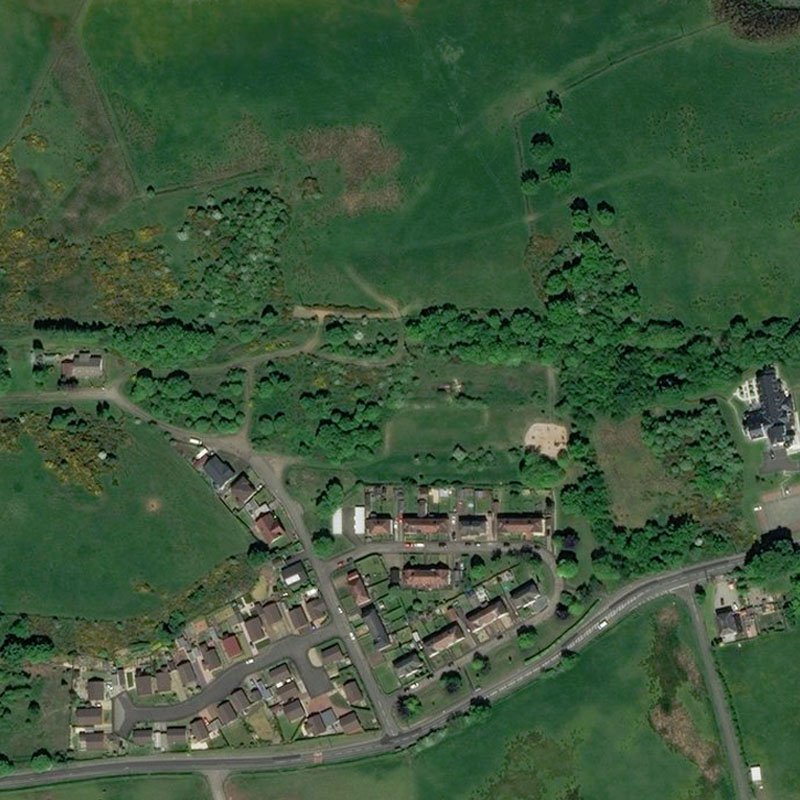 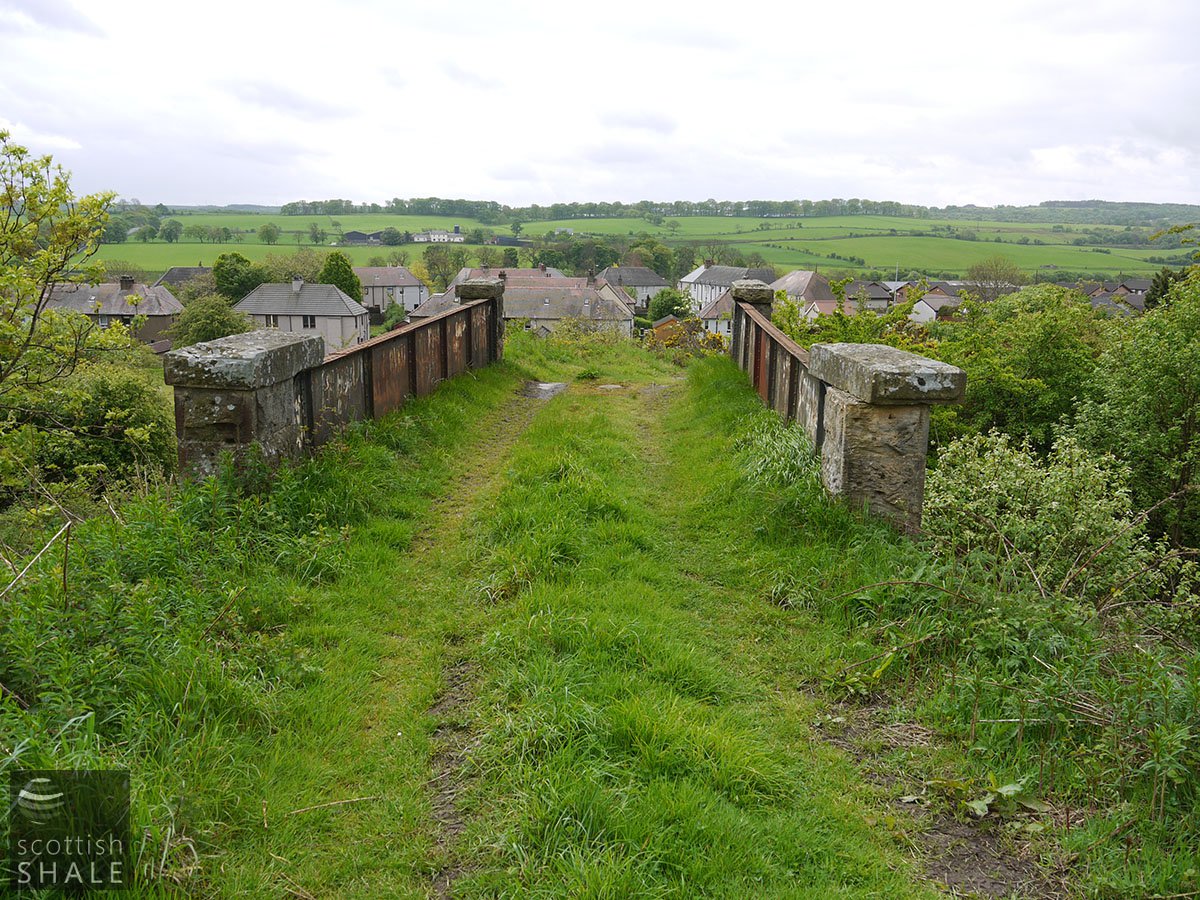 View south from bridge over the Kilsyth & Bonnybridge railway. May 2011. 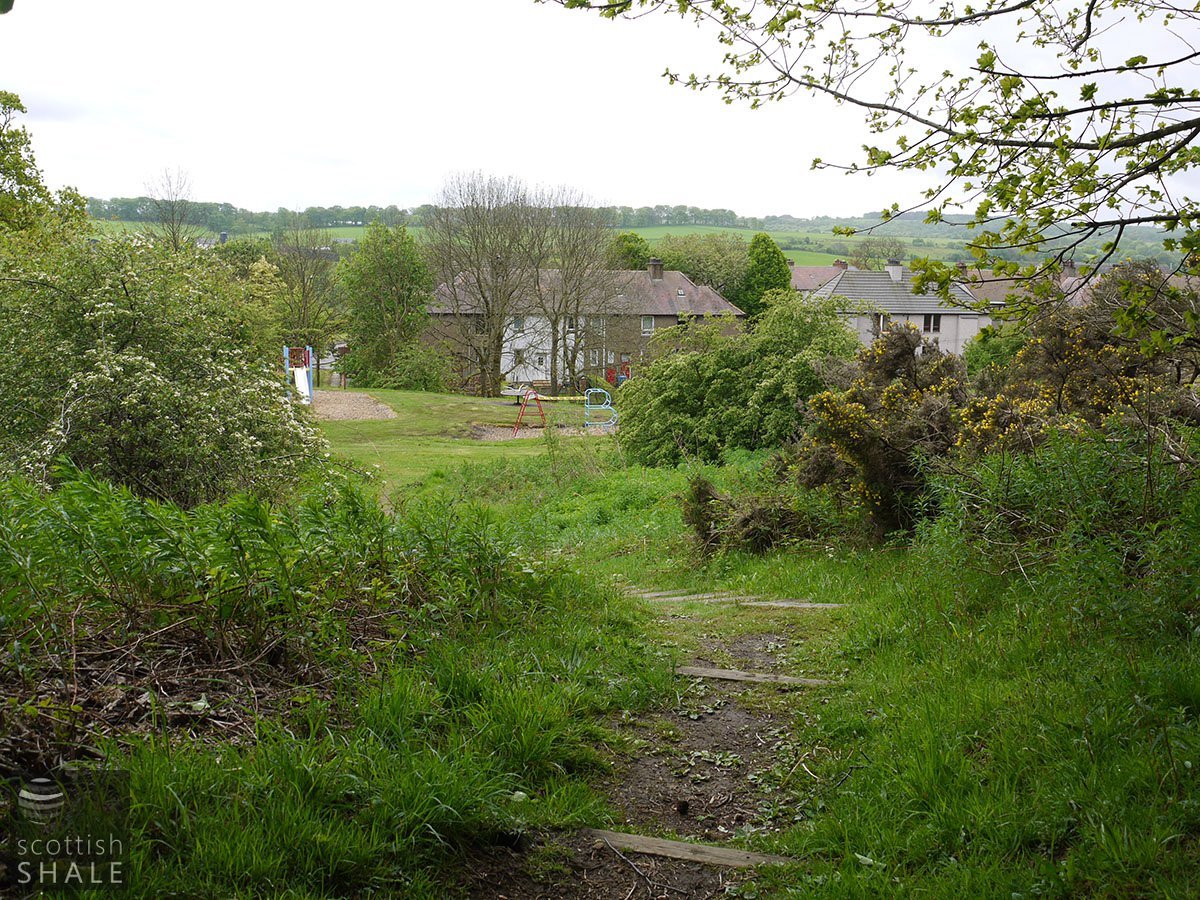 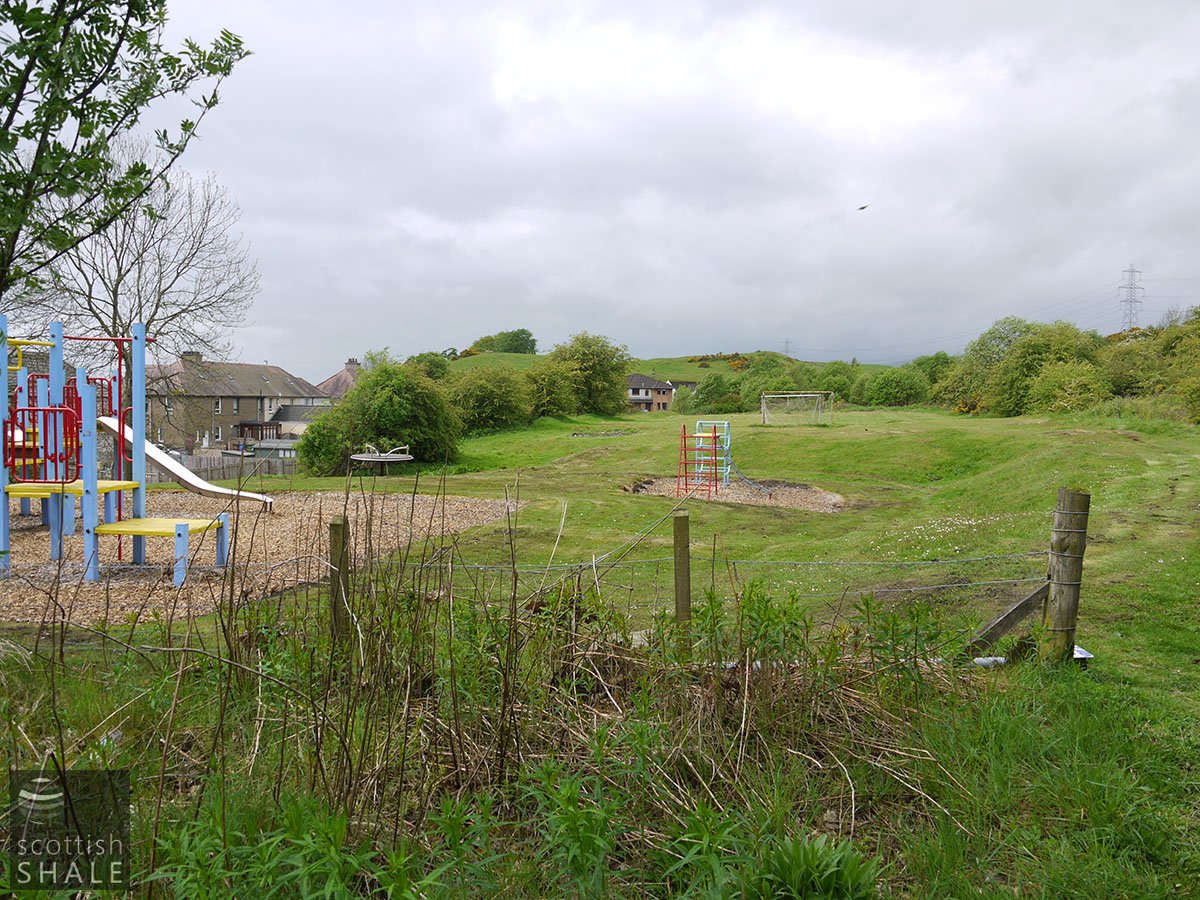 THE BITUMINOUS SHALE, IRONSTONE, and FIRE CLAY, in the Lands of Wester Seamores, in the Parish of Denny, about a mile from Castlecary Station, in close proximity to Forth and Clyde Canal, and intersected by the Highway at Dennyloanhead. The Shale and lronstone, and analysis, may be seen. They lie together, forming one working, are excellent in quality, and the shale rich in Paraffine. The Fire Clay is abundant, and of first rates quality. The Shale and Ironstone are being wrought in adjoining Lande, within a few yards of the march. Apply personally to Adam Smith, Writer, Falkirk.

In your paper on this subject you refer to the shale found in the neighbourhood of Castlecary, which has now been wrought for upwards of 18 months, and is manufactured to a very large extent, producing one of the finest oils in the market, and with highly profitable results. At Coneypark the same shale is being wrought, and a large work is in course of erection for the purpose of extracting and refining the oil. From various indications this shale extends over a considerable area, which is as yet scarcely touched, but which will undoubtedly be soon fully explored, seeing that it is so favourably situated both for coal and conveyance. From the valuable discoveries already made and proved, I have no doubt that " petrolia" will in a few years form a very important article of manufacture, and will bulk largely in our exports. A large portion of the capital for these operations will be furnished by the commercial men of Glasgow, and this city will ere long become as celebrated for petroleum as for its iron and other staples of trade.

The proprietor of Coneypark, this neighbourhood, having commenced, some months ago, to erect retorts for the distillation of shale, found on his ground, began operations last Thursday. At present the retorts at work are only twenty-six in number, but arrangements are being made to increase their number considerably. They are horizontal retorts in one continuous bench, and are of unusual large size - being fourteen feet long by three wide and three high. Each retort is heated from furnace directly beneath it, and is capable of working off the enormous amount of twentyfive hundred-weights in the course of twenty-four hours. The yield of oil is very large, being upwards of forty gallons per ton, and of the very low specific gravity of .855. The works, when fully extended, will give employment to a large number of hands, and help to increase the trade of our town.

Near Wyndford, a work for the manufacture of crude oil was recently erected; but, owing to the stagnation of the oil trade, operations were completely suspended for a time, and it is only within the past few weeks that these were resumed on a limited scale.

Paraffin Grease for sale, at a cheap rate – Apply at Coneypark Oil Works, near Castlecarry Station.

John Barr, Ardrossan appealed against a valuation of £40 on his oil works at Coney-park, Kilsyth. Mr. J.D. M'Jannet, his manager, appeared for him and stated that , in consequence of the dullness of oil trade, the works had been closed for a considerable time. The assessor agreed to restrict the valuation on which assessment might be levied to £20, leaving the other £20 for unoccupied works.

These works, which have been standing for the last four years, are now about to be restarted by Provost Bain, Ardrossan, under the management of Mr Donald Lamont.

AT CONEYPARK COLLIERY, CASTLECARY, On TUESDAY 12th AUGUST. At 12 o'clock noon, EXTENSIVE PUBLIC SALE OF COLLIERY AND OIL-WORK PLANT (Which belonged to the late John Barr, Esq.) DUNCAN KEITH, BUCHANAN, & M'CLOY have been instructed to SELL, by PUBLIC AUCTION, as above, including: At COLLIERY......... At OILWORK – Bench of 25 Retorts with connecting Pipes Doors and Furnace Bars, 2 Malleable Iron Condensers, 33ft long x 3ft diameter; 2 Experimental Retorts, 11 Malleable Iron Oil-Tanks, 219 Oil-Barrels, Chimney Stalk, Brick and Tile Building used as Bothy, &c. On view on Day Previous to Sale. Particulars in Catalogues, to be had on application to ROBERT FREW, Esq., M.E., 73 Bath Street; or from the AUCTIONEER, 72 Renfield Street Glasgow.

At Coneypark, the Shale Coal, 6ftms. above the Kiltongue Coal has been very extensively worked. As the following section shows, an oil shale is associated with it and was formerly taken out along with the coal: Black blaes 2ft. 2 in., OILSHALE 9 in. Ironstone 7 in. COAL 1ft 1in.