One of a number of small oil works that utilised a seam of "parrot shale" or "shale coal" found in the Kilwinning area. Balgray oil works is not listed by Redwood in "A Practical Treatise on Mineral Oils", and it is possible that the site of the works were subsequently developed as Annick Lodge oil works.

The only known references to an oil works at Balgray are:

The farms of West Balgray and East Balgray, lie immediately north of the presumed site of Annick Lodge Oil Works, but maps reveal no evidence of mineral working or any other clues as to where an oil works might have been located. Valuation rolls from 1875 record that the lands of Balgray and Standeep were owned by Robert Dunlop Allison of Balgray, but that "minerals (shale)" were held by Merry & Cunninghame, Coalmasters, although ascribed no rateable value. 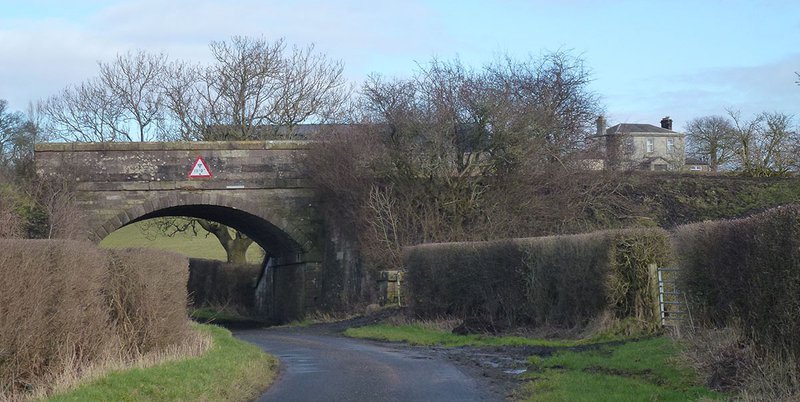 Overbridge and embankment of G&SWR, with West Balgray farmhouse in the background. The presumed site of Annick Lodge oil works lies about 200m SE (to the right) along the course of the railway. Looking north east. February 2012.

On Saturday evening last, William Paterson, aged 33 years, oil manager at Balgray Oil Work, Annicklodge, parish of Irvine, committed suicide by thinking a quantity of vitrol in a house used for making ammonia at said oil work, and belonging to the Glengarnock Iron Coy., from the effects of which he died at five o'clock the following morning. It appears that deceased had been very much addicted to drinking for some time past, and was very much under its influence when he committed.

OILWORK FOR SALE, BY PUBLIC AUCTION

There will be Sold, by Public Auction, the OILWORK at BALGRAY, near Annicklodge, on Thursday, 9th September, 1875, consisting of

The above will be put up in lots to suit Buyers. Annicklodge is three miles from Irvine Station and a Conveyance will start from the Station on the arrival of the 10.40 Train from Glasgow. Sale to commence at One o'clock. Terms-Cash at Sale. JOHN PARKER, Auctioneer.