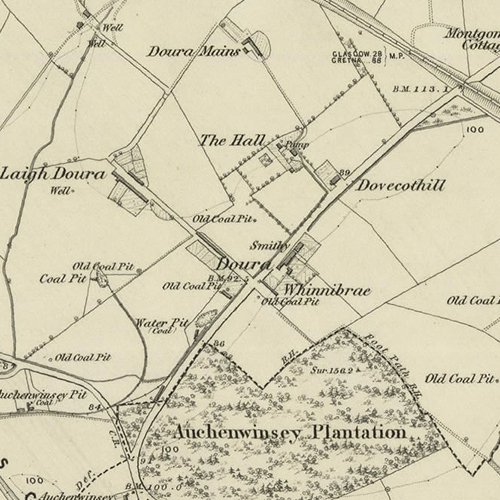 One of a number of small oil works that utilised a seam of "parrot shale" or "shale coal" found in the Kilwinning area. Doura oil works are not listed by Redwood in "A Practical Treatise on Mineral Oils" although the book records that the Doura or Patterson (sic) shale yielded 36.45 gallons of crude oil per ton of mineral.

John Baird of Doura Oil Works is listed in the 1878 Slater's Royal National Commercial Directory of Scotland under "Paraffin Oil Distillers" in "Kilwinning". The precise location of the works is not known, but 1875 valuation rolls list an "oilworks at Doura", property of James Baird of Kirkmuirhill, Lesmahagow, which followed details of brickworks, smithy and various houses owned by John Barr and William McJannet. Details of the Patterton Oil Works, proprietor John Baird, are also included under the heading of "Doura".

Doura was already a well established coal mining area when linked to the main railway network in the 1830's. By 1865 the coal works at Doura were owned by John Barr, the provost of Ardrossan and William McJannet, a shipping agent based in Ardrossan, and by 1875 the firm of Barr & McJannet, had established a brick and fireclay works at Doura. McJannet was declared bankrupt in 1875 and in Slater's 1878 commercial directory, the Doura Fire Clay Co. - Robert Armour, managing partner - were listed as proprietors.

It seems probable that the Doura oil works were associated with the Doura brick and fireclay works. Oil works proprietor John Baird had many interests in tile and brick manufacture, and as a partner in J. & J. Baird had experience of producing oils as part of brick work operations at Kirkmuirhill oil works, and perhaps elsewhere. It seems likely that the "shale coal" retorted at Doura was as a subsidiary product of fireclay and coal mining.

The detailed history of the oil works remains unclear. A report of the annual spring show of the Ayrshire Agricultural Society, that appeared in the Scotsman of the 28th April 1870, listed a prize for implements awarded to Messrs Barr & M'Jannet, of the "Doura and Coney Park Coal, Fireclay and Paraffin Oil Works, Ardrossan". This suggests that Barr & McJannet were manufacturing paraffin oil on their own account at that time, although the "Coney Park" part of the title seems to refer to Coneypark Oil Works, Stirlingshire, which were operated by John Barr.

It seems certain that by 1873,. Baird was producing oil at Doura as the court case of Baird v. Glasgow and South Western Railway (reported in the Glasgow Herald of 8th April 1873) relates to the leakage of crude oil from a railway tank wagon en route from Messrs Baird's works at Doura to a refinery in West Calder. This also indicates that the oil works were served by a railway siding and therefore seem likely were located in the vicinity of the brick and fireclay works. 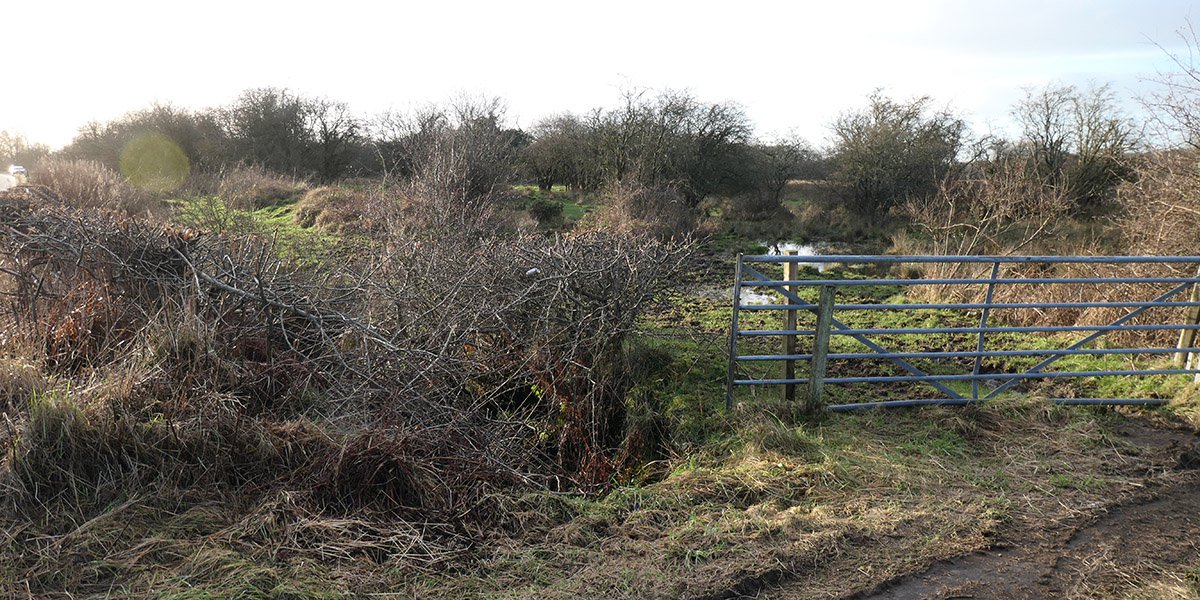 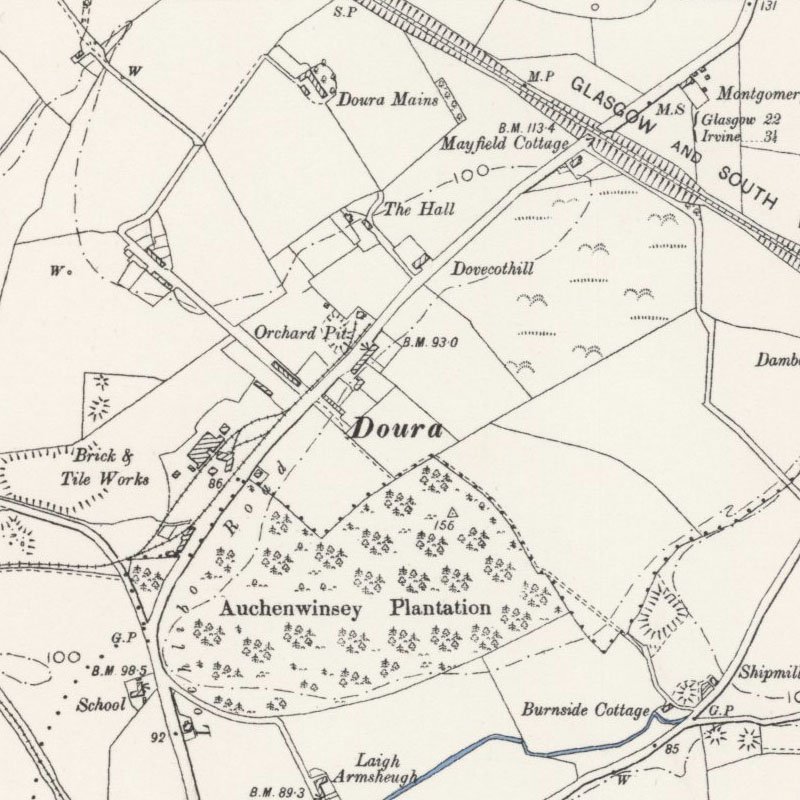 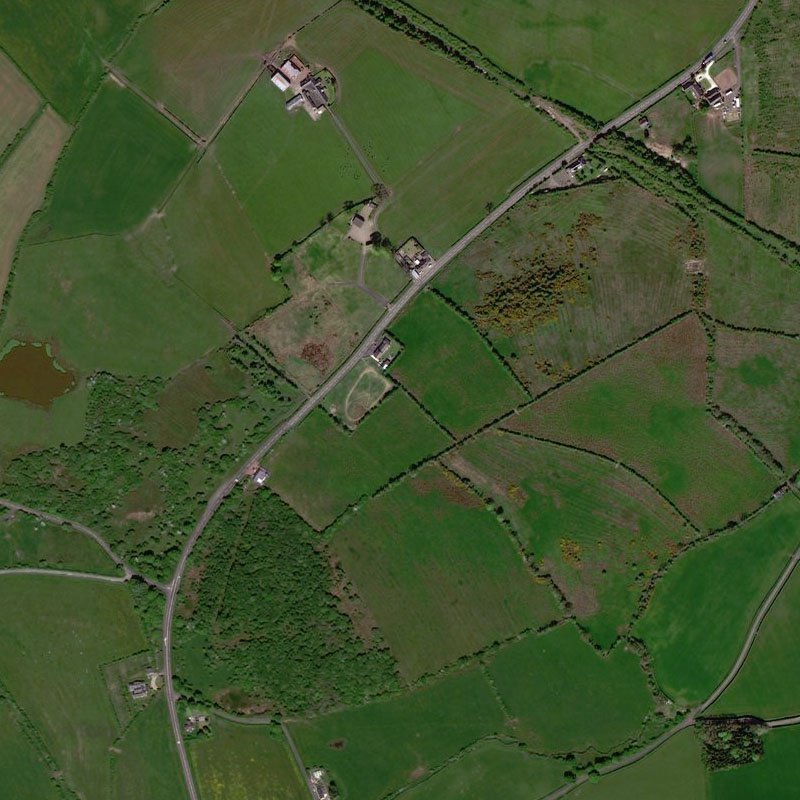 Late on Saturday night last, the Inspector of Police received information that part of the Paraffin Oil Works at Doura belonging to Messrs John and James Baird, oil merchants, Lesmahagow, in the county of Lanark, was destroyed by fire. That officer proceeded immediately to Doura, and, on making enquiry as to the cause of the fire, he found it necessary to take in charge a boy named John Kerr, son of a widow residing there, aged about thirteen years, who was conveyed to Ayr on the following Monday to be examined before the Sheriff. We learn that the oil house where the fire originated was burned to the ground, consuming the oil in the receiving barrels, and causing the oil tank to explode, whereby 1,700 gallons were destroyed. The loss sustained is estimated at between L5O and L6O.