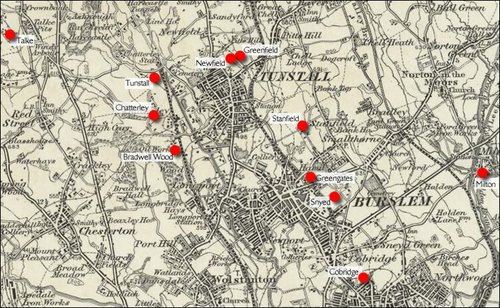 Young's patent for producing mineral oils from cannel coal expired in mid 1864, and as this date approached, many sought suitable oil-rich coals and shales to start new oil industries.

In mining districts of North Staffordshire, notably in the Burslem and Tunstall areas, a coal shale was found in association with ironstone seams that proved to be a good source of oil when retorted. This shale had previously been mined along with the ironstone but had been considered of no value and had been dumped at the pit heads. According to a newpaper report of 1868, a "gentleman formerly in the employee of the patentees" communicated with one one firm of colliery proprietors who erected oil works at Stanfield in c.1865

These works were initially operated in secret, buying in the waste shale from local pits at a nominal cost. Once the value of this waste became known however, many coal and iron masters constructed their own oil works, often closely associated with existing iron furnaces or brickworks. By late 1865, at least eight works were in operation, equipped with a total of 154 retorts.

In 1866 a number of local coalmasters came together to promote a limited company, The North Staffordshire Oil Co. Ltd. to operate a refinery equipped to process output from the various crude oil works. This avoiding the need to ship Staffordshire crude oil to North Wales or Scotland for refining into paraffin and other oil products.

The collapse in the price of oil during 1866 and 1867 put pay to the production of refined oil products, however a demand for crude "colliery oils" to lubricate and waterproof machinery in local mines, furnaces and potteries seems to have sustained many Staffordshire oil works into the 1880's. It appears that several oil works sites continued in use therafter, refining imported petroleum.

Staffordshire Oil Works listed by the Coal Commission in 1865