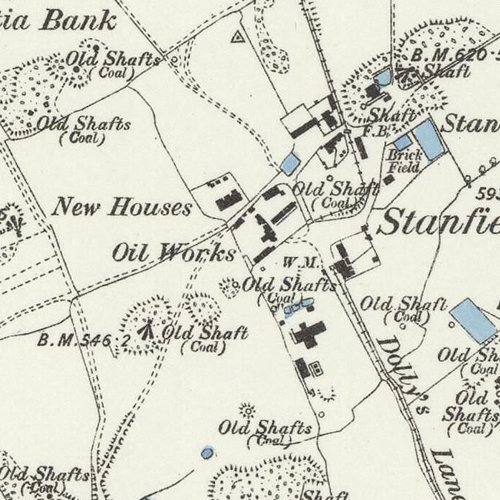 According to a newpaper report of 1867(see below), Stanfield was the first oil works established in North Staffordshire, and for a period bought in waste shale produced from many local pits, until others came to appreciated the value of this material. The Coal Commission report of 1865 lists Messrs. Adams as proprietor of an oil works at Tunstall with 20 retorts.

The works appear to have been sold as a going concern following the bankrupcy of Slater & Co. in 1864. The works remained in use as an oil refinery under a succession of owners until at least 1916.

Mapped by the Ordnance Survey of c.1876, showing oil works. 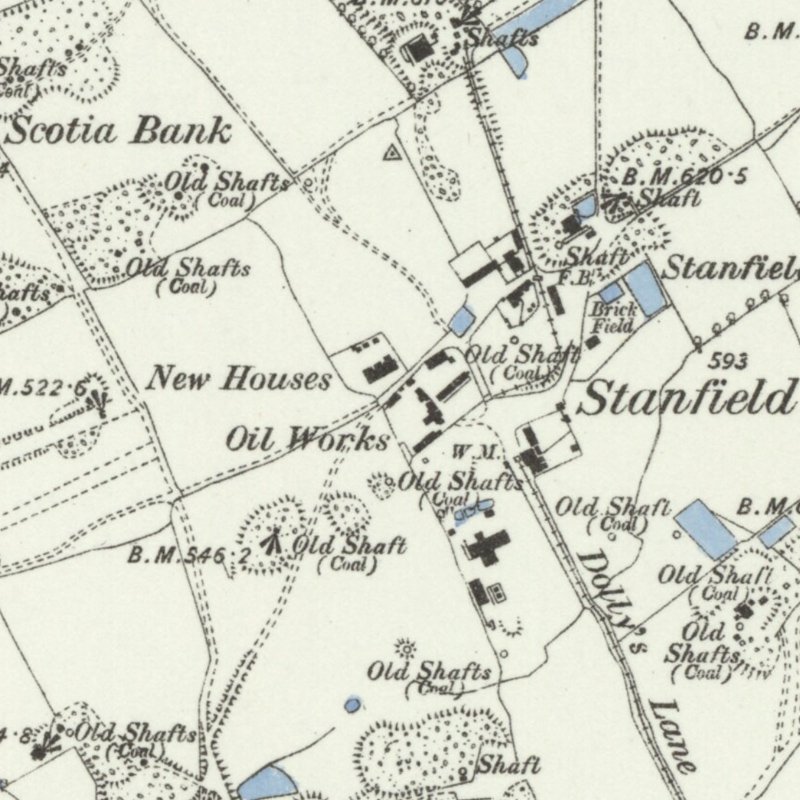 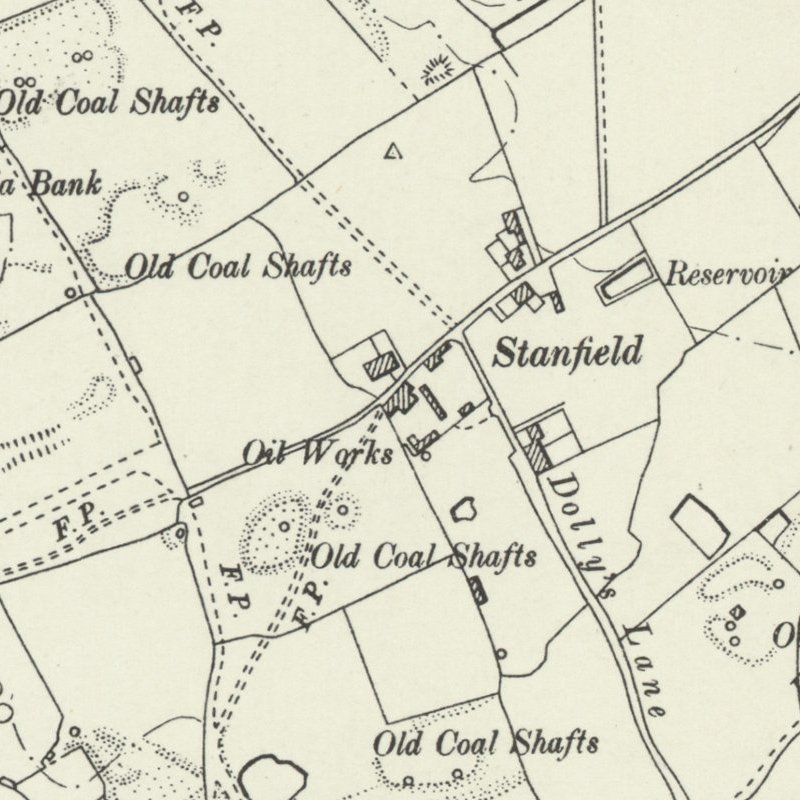 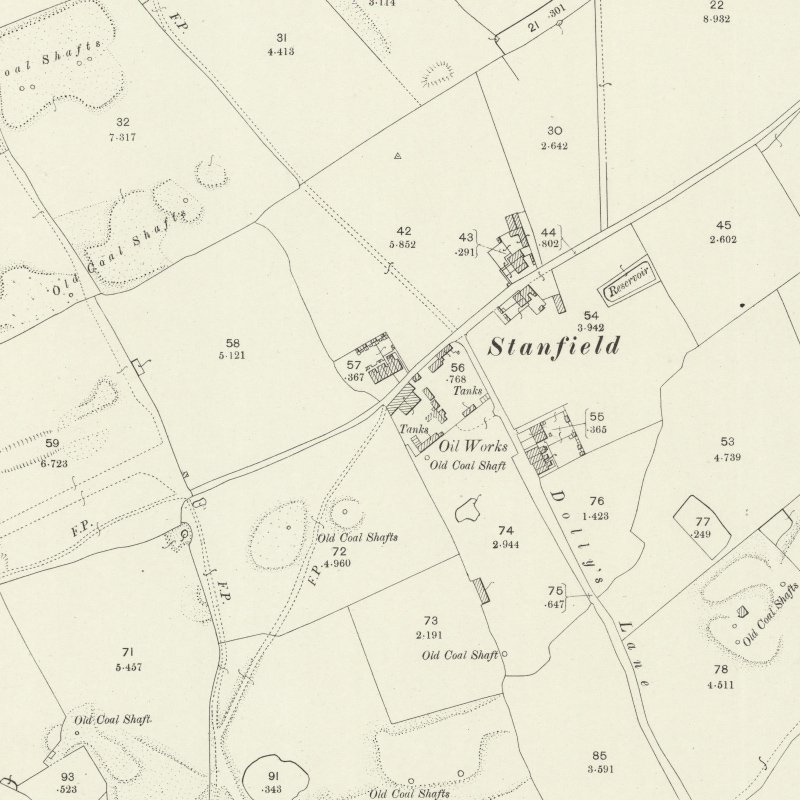 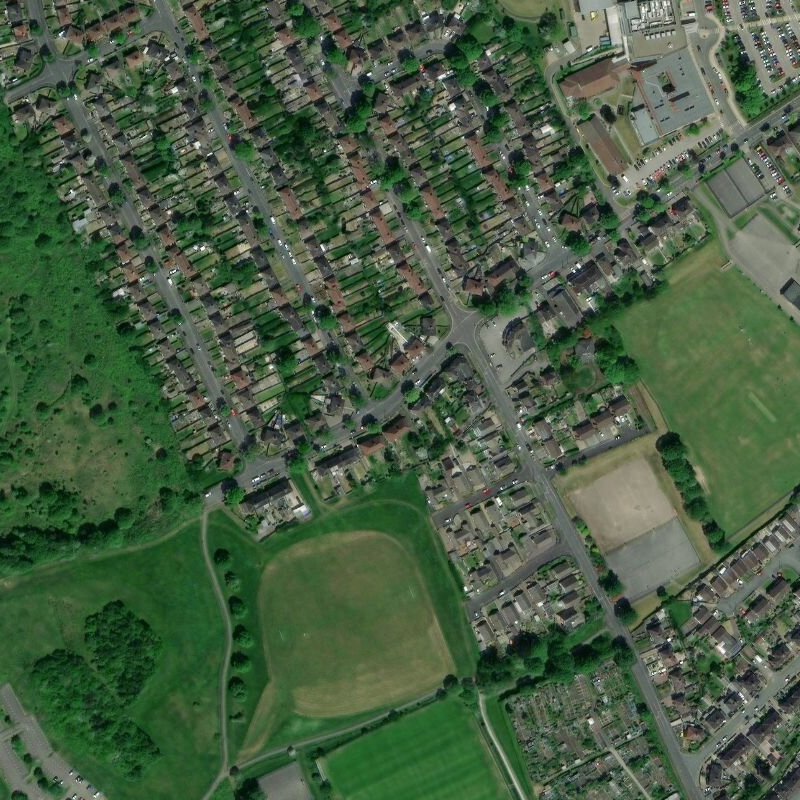 A new and very extensive field of industry has recently been opened up In North Staffordshire. In the Year 1851 a Mr. Young patented a process for extracting oil from to cannel coal, which is principally found in the coalfields of Scotland and North Wales, Three years ago it was discovered that the common shale of North Staffordshire possessed similar properties, which might m he turned to good account under the same patent.

This shale abounds in millions of tons near the North Staffordshire ironstone seams, and has hitherto been considered as worthless refuse, a premium having been frequently paid by colliery proprietors for the removal of the large gr heaps of the material which had accumulated at the pit mouths in the course of the excavations bei for ironstone.

The discovery was at first only known only to one firm of colliery proprietors, who obtained the raw material free of cost from other mine owners in the neighbourhood. The latter, however, at length discovered the secret, and at once demanded and obtained 5s. per ton for their shale, which has suddenly become as valuable as coal itself, being worth 10s. per ton to the proprietor, who may chooses to extract the oil from It himself.

This discovery has of course worked a revolution in the value of the ironstone mines of the district, and many mines which have been worked to their full extent and closed up, will be re-opened for the purpose of extracting the now precious shale, In the meantime Mr. Young's patent has expired, and the process of extracting the oil has become common property, and near 100 tons of crude oil are being produced every week within a short distance from Burslem. and Tunstall, though, as compared with its future magnitude, the trade can scarcely be said to have begun.

The oil thus obtained in its crude state has hitherto been In sent to distant refineries. It was ascertained that the erection of an oil refinery on the spot would be a saving of £3 per ton to the producer in carriage and leakage,. To meet this want some half-dozen gentlemen residing in Tunstall and the neighbourhood, including several extensive owners of shale mines, formed themselves into a company, under the title of the North Staffordshire Oil Company (Limited), The works, which are now almost completed, and were opened on a small scale last week, have been built at a cost of £12,000, on about three acres of ground, near what is known as Bradwell Wood, close to In the North Staffordshire Railway, and midway between the Burslem and Tunstall stations.

Immense tanks and stills and all the most modern oil refining apparatus have been erected, and the company intend, as the trade expands, to enlarge the works to double their present dimensions, so as to be able to refine 200 tons of crude oil per week.

In the year 1851 a Mr. Young patented a process for obtaining paraffin oil from cannel coal, and erected large works for extracting the precious liquid, at Bathgate, in Scotland. Other extensive works under the same patent were soon afterwards established in Scotland, and four years ago a gentleman named Mr. Fernie, in company with several other gentlemen, began the manufacture of the same article at Saltney, in North Wales, his example being quickly followed by other mine owners in the principality.

A little over three years ago a gentleman, formerly in the employ of the patentees, discovered that the coalfield of North Staffordshire abounded in a material which, after undergoing the above-mentioned process, produced oil equal in quality, though not in quantity, to that obtained from cannel. This material was simply shale - a stone which is exceedingly abundant near our seams of ironstone. It abounds to an almost unlimited extent in North Staffordshire, has hitherto been considered quite useless and the thousands of tons which have been necessarily brought to the surface in the course of the excavations connected with ironstone mines have been considered worthless refuse, a premium being been generally paid for its removal.

The person who made the discovery at first only communicated, his knowledge to one firm of colliery proprietors who erected retorts for carrying out the process at Stanfield, near Burslem, keeping the matter a profound secret, and actually obtaining the bulk of their supply of the raw material free of cost from the neighbouring mine owners. But the latter, though ignorant at first of the object for which the refuse from their mine months was carted away so readily, were not long in suspecting the nature of the mysterious operations at Stanfield, and having by dint of a little tact and perseverance gratified their curiosity, showed that they were "wide awake" by at once demanding 5s. per ton for their shale. In the meantime, Mr. Young's patent expired, and the process became common property; the result was that retorts began to spring up in all directions, and at the present time many tons of oil are manufactured weekly within short distances of Burslem and Tunstall, though the trade, as compared with its profitable magnitude in the future, may be said to have been scarcely begun. The discovery of this process of extracting a very valuable liquid from a hitherto almost worthless material, lying in millions of tons near our coal and iron— a discovery more important than that of manufacturing gas from coal— has, of course, worked a revolution in the value of mines in this district. The shale, which several years ago, was worth nothing at all, will now fetch between 5s. and 6s. per ton as raw material, each ton yielding from twenty to thirty-live gallons, according to the quality, and to a proprietor who chooses to extract the oil from it himself it is worth 10s. per ton, thus becoming equal in value to either coal or ironstone. Many ironstone mines, which have been worked to their full extent and have been long closed up, abound in shale, and will, of course, be re-opened, and afford a lucrative return to the fortunate proprietor.

The oil thus obtained, however, is in its crude state, and requires refining, and has to be conveyed, by rail or canal, at a considerable expense, to the nearest refinery. It was ascertained that the erection of an oil refinery on the spot, would be saving of £3 per ton to the producer, in carriage and leakage. In these days of enterprise and speculation, a seriously felt public want does not long remain without some attempt, more or less successful, being made to meet it. In most instances, where the undertaking is a large one, capitalists combine, and establish a limited liability company. This has been done in the present case. Some half dozen gentlemen in Tunstall and the neighbourhood, including several extensive owners of shale mines, have formed themselves into a company called the North Staffordshire Oil Company (Limited).

The process has just been commenced on a small scale, but it will be several months before the works will be in full operation, and then the company will be able to refine 100 tons per week, finding employment for between eighty and ninety persons. As the crude oil trade expands, the company purpose increasing the size of the works until they are enabled to refine 200 tons per week. The works from beginning to end have been erected in first-class style, and on the newest principles, by Messrs. Barker and Cope, of Burslem and Kidsgrove, who have also provided the boilers, engines. tanks (all iron) and in fact the whole of the machinery, We believe this is the first time a local firm has undertaken so difficult and extensive a work, and Messrs. Parker and Cope are to be congratulated for the successful accomplishment of their task. We understand that the total cost of the works will be nearly £12,000.

BURSLEM. Fire.—Early yesterday a fire occurred on the premises of Messrs. Cooper, Adams, and Mellor, Stanfield Oilworks. About seven o'clock a man named William Lymer endeavoured to melt a tap, containing hard grease, with shovel fire, when the grease ignited, and damage to the amount of about was done to the oil refiners' and iron work