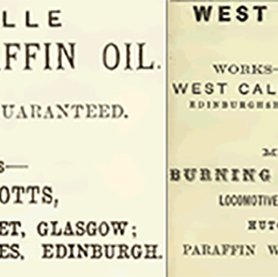 Businesses associated with the shale oil industry usually fall into one of three types of business entity:

Almost two hundred different concerns are known to have been associated with the production of shale oil in Scotland.

In the early years of the industry, the majority of these enterprises were operated as private companies; owned by an individual entrepreneur, a partnership, or operating as a family business.

The Bathgate Chemical Works, which set the foundations of the industry, were developed by the partnership of James Young, Edward Meldrum and Edward Binney. When this partnership was dissolved in 1864, Young bought out his partners' interests and began the development of a new works at Addiewell on his own account.

In a similar manner, most of the rash of small-scale oil works that proliferated during the "oilmania" of the late 1860's were established as partnerships; often hurriedly contrived alliances of landowners, businessmen and the professional classes, all intent in following James Young's example and making their fortune in the oil industry.

Few of the small "oilmania" enterprises operated long enough to establish a consistent trading identity and some may be referred to by a variety of titles in historical records. Without any central register of private companies, this issue can confuse the researcher.

The Rise of Limited Companies

Public limited companies offered the opportunity to raise capital from a much wider circle of investors, in order to fund much larger projects. John McKay in his book "Scotland's First Oil Boom; The Scottish Shale-Oil Industry 1851-1914" identified 43 limited companies associated with the shale oil industry in Scotland.

The first shale oil firm launched as a limited company was the Broxburn Shale Oil Company Ltd, a small scale concern established in 1862 which was active for little more than a year. Most of the limited companies launched in the 1860's and early 1870's were similarly small scale and short-lived. The notable exceptions were Young's Paraffin Light & Mineral Oil Company Ltd; a very substantial public company created in 1866 to purchase much of James Young's interests at Bathgate and Addiewell, and the Uphall Mineral Oil Company Ltd set up in 1871 to purchase interests from Edward Meldrum and his fellow proprietors.

It became common practice for shale oil concerns to start out as private businesses, then be launched as public limited companies once reserves of shale had been proved. Many successful companies were established in this way, but there were also instances where shareholders felt aggrieved that they had been misled by false expectations. George Simpson seems to have been associated with many of the companies in which such discontent arose.

The Broxburn Oil Company Ltd, established in 1877, was the first firm to challenge the scale and dominance of Young's company. It's success, along with the improving economic conditions, sparked the promotion of a new wave of substantial public limited companies during the early 1880's, including the Bathgate, Linlithgow, Pumpherston, Westfield and West Lothian Oil Companies. In many instances, a company was promoted by a group of entrepreneurs, and supported by shareholders, from a particular area of Scotland; for example Linlithgow Oil Company Ltd was backed by Fife business interests. Only the English-registered Caledonian Mineral Oil Company Ltd was promoted outside of Scotland.

Other than the amalgamation in 1883 of the Uphall Oil Company Ltd into Young's Paraffin Light & Mineral Oil Company Ltd, few mergers and acquisitions took place within the industry. Although there were business allegiances between certain shale oil producers and refiners, competition between the major companies meant that opportunities were missed to work together to combat the competition from imported oil. Rather than weak companies being taken over by stronger ones, it was more common that a failing company would be dissolved and new company created in order to reorganise its affairs or to attract additional capital.

During the late 1890's and in the early years of the new century, the Pumpherston Oil Company Ltd grew rapidly by buying up mineral rights and sites abandoned by failed firms and constructing new oil works to serve their Pumpherston Refinery. Similarly the Oakbank Oil Company Ltd made bold new investments and moved the focus of their operations to a new shale field in Duddingston. Over the same period, the weaker and less dynamic firms, such as the Clippens, Linlithgow, Hermand and Holmes Oil Companies, fell by the wayside.

By the outbreak of World War One, only six Scottish shale oil companies remained:

James Ross & Company were exceptional in being a privately owned company; the offshoot of a long established family firm of tar distillers based in Falkirk.