An attempt had been made to form the company in 1883 under a different Chairman, but deposits were returned following a fall in the price of oil.

The Hermand Oil Company Ltd was eventually constituted on 22nd September 1885 to take forward the oil interests of James and the late Thomas Thornton, who had various shale interests in the Hermand estate since about 1866. The company took on the Thorntons' mineral leases at Hermand, Birniehill, Wester Breich, Mid Breich and Easter Breich in the Parishes of West Calder and Livingstone. The new company was also to construct a new crude oil works at Breich, near West Calder.

The company met with some success and, in 1889 declared a dividend of 17.5% and advanced plans to construct a refinery at its Briech oil works.

Instead, the company siezed the opportunity to merge with the Renfrewshire-based Walkinshaw Oil Co. Ltd. and to refine its crude oil at the Walkinshaw company's refinery near Paisley. The 1885 company was dissolved voluntarily on 27th February 1890 together with the Walkinshaw Oil Company Ltd. From both these concerns, a new Company, also named the Hermand Oil Company Ltd, was incorporated on 11th March 1890. This new Company acquired the undertakings, property and assets of the dissolved Walkinshaw and Hermand Companies.

Subscriptions are invited for the 20,000 Shares of this Company. Deposit £1. Payable on Application; £1 on Allotment, £1 nor sooner than Three Months thereafter, and the balance in future calls as required.

The Hermand Oil Company capital, £200,000, has been fully applied for.

Letters to the Editor

Sir, On my return to the office this morning, after several weeks' absence, my attention has been directed to a paragraph in your issue of 25th ult., and to a letter from Mr James Thornton in your issue of 30th ult., both relating to "what is known as Hermand." Since Mr Thornton has seen fit in his letter to allude to this company's operations in the district referred to, I beg leave to be allowed to state the actual facts. It is not the case, as he mentions, that this company "strenuously but unsuccessfully tried to secure a lease of the shale in Wester Breich."

The negotiations were simply for a trial lease to enable us to prove the estate and ascertain if it was of any value. Mr Thornton, who afterwards acquired the lease, empowered one of our officials to state to me that he was willing to transfer it to our company, but this was declined.

Further, Mr Thornton's letter makes no mention of, but quietly ignores, the suggestive fact that this company two years ago abandoned the mineral leases of Hermand, Birniehill, and Hartwood, being part of "what was known as Hermand," and they did this after boring for twelve months and spending a considerable sum in proving their value.-

I perceive that an attempt is again being to made to float the Hermand Oil Company. On 13th November, 1883, their interim secretary, in returning the deposits to those parties who had applied for shares, intimated that the reason for doing so was that during the short time which had elapsed from the issuing of their prospectus a fall had taken place in the prices of some of the shale products.

Some people thought that the reason assigned for the withdrawal was a correct one, and others suggested that the company might have failed to receive adequate support, but all were agreed that the wisdom of the step was unimpeachable.

Why, therefore, is an attempt now being made to resuscitate the company? It cannot be in consequence of the prices of shale products having advanced in the interim, because the very contrary is the fact, as the following figures, when compared with those of November, 1883, will testify - viz., soft scale, reduced £15 per ton; hard scale, reduced £10 per ton; heavy oil, reduced £1 per ton; sulphate of ammonia reduced £2 per ton; burning oil, the a same; naphtha, the same. If the slight fall in a prices which took place betwixt the end of October and the middle of November, 1883, was a sufficiently cogent reason for not proceeding with the Hermand Oil Company, then the further and greater fall which has since taken place ought to lead all parties to consider the position carefully. But there are other valid reasons. Look at the lengthened array of non-dividend mineral oil companies for the past year - viz., Bathgate, Lanark, Mid-Lothian. Walkinshaw, Oakbank, and Westfield.

I have recently been reading the prospectuses of the majority of these ill-fated companies, and the perusal of these glowing documents, by the light of subsequent events, would have been most amusing, were it not, for the melancholy remembrance of the serious losses sustained and of some sad events resulting therefrom. The only companies paying dividends in these times are those who possess a widely different class of shale from what is to be found in the districts referred to. Let us inquire into its antecedents.t and ascertain what has been the outcome.

Mr Dunnett started a work there at a time of brilliant prices, but was not successful. If not misinformed, one of the directors (or a brother) of the proposed company commenced works in that neighbourhood and abandoned them.

It is asserted that an Englishman came to the district and left behind him a fortune - not available for his heirs. The West Calder Oil Company, after struggling for years without paying any dividend, had ultimately to succumb, and to sell for £17,500 their works, leases, and houses, which had cost them above £110,000, and leaving debentures unpaid, at a time when prices were certainly fifty per cent. higher than at present. And it is well known in the district that Young's Company have had to part with some hundreds of their workmen on account of the inferior quality of the shales found there, and are replacing their reduced output in that locality from districts where the shale is profitable.

All this demonstrates that the shales of that district are utterly inferior to those worked in the Broxburn, Burntisland, and Pentland districts, or to those which Young's Company have latterly commenced to work at Newliston and Hopetoun. Assuming that, notwithstanding the sad experience of the past two or three years, there still remains a fragment of the public willing to risk their money in new oil companies, why should they subscribe at par to an untried venture, when they could purchase shares in other new oil companies at about one-fourth their original value - in companies, too, whose prospectuses were quite as flattering as that now issued, and with the usual mining certificates, -

Letters to the Editor

SIR – I notice in your paper of the the 29th a letter from Mr John Fyfe, managing director of Young’s Company. Allow me to say:-

THE HERMAND OIL COMPANY LIMITED. THE LIST OF APPLICATIONS FOR SHARES WILL BE CLOSED ON TUESDAY EVENING, 4TH AUGUST. PROSPECTUSES and APPLICATION FORMS may be had at the Temporary Ofices 20 GEORGE STREET, Edinburgh. 11 WEST REGENT STREET, Glasgow. Or from the Bankers – THE COMMERCIAL BANK of SCOTLAND, Limited, HEAD OFFICES and BRANCHES.

Mr JAMES THORNTON of HERMAND having decided to give his personal GUARANTEE for one year on the Shares of the HERMAND OIL COMPANY, LIMITED, the Directors, who believe the Property to be a valuable one, and sound in every respect, and have themselves decided to hold their own Shares without Giarantee, have resolved to KEEP OPEN THE SHARE LIST for the period up to the END OF AUGUST if necessary, but will close whenever the capital is applied for.

The FOLLOWING GUARANTEE will accompany the intimation of allotment of Shares:-

I JAMES THORNTON, PROPRIETOR OF HERMAND, do hereby agree and bind, and oblige myself, my heirs, and successors to TAKE OVER ANY SHARES of the HERMAND OIL COMPANY, LIMITED, and repay the FULL AMOUNT PAID on them to the Company, if required to do so by any Shareholder to whom the said Shares may belong, at any time during the month of August 1885, together with Interest at the rate of FIVE PER CENT . PER ANNUM from the date of payment of instalments.

PROSPECTUSES AND APPLICATION FORMS may be had at the Temporary Officices of the Company – 50 GEORGE STREET, EDINBURGH. 11 WEST REGENT STREET, GLASGOW. Or from the Bankers – The COMMERCIAL BANK OF SCOTLAND, LIMITED – HEAD OFFICE, and BRANCHES.

THE LIST OF APPLICATIONS for SHARES will be CLOSED on SATURDAY NEXT, 5th SEPTEMBER.

For the satisfaction of Intending Shareholders and others, SAMPLES of the several Seams of SHALE have been submitted to DR STEVENSON and W. IVISON MACADAM for ANALYSIS and their REPORT is annexed:-

An ESTIMATE based on their Analysis is also submitted, showing the probable PROFIT, even at present low prices, on the manufacture of 120,000 Tons of Shale per annum, and the SUM CONSEQUENTLY AVAILABLE for RESERVE and the Payment of DIVIDENDS on a Capital of £100,000.

The Shales, as will be seen, are proved to be of the highest character, and upwards of FIFTY out of the number of Shareholders, who have already lodged Applications, and RESIDENT in the DISTRICT of WEST CALDER, thus indicating the fullest confidence in the success of the undertaking in the locality where the Shale Fields are best known.

A personal guarantee will be given by MR JAMES THORNTON of HERMAND engaging to RETURN the Sums paid to the Company, with interest, to any Shareholder at the end of one year, if desired.

We beg to report that we have made careful practical tests with three samples of Shale forwarded to us by John Armour, Esq., Niddrymains, Winchburgh. The tests were made in a retort capable of holding about 3cwts. of mineral, and were under the direct control and working of Mr Iverson Macadam, who made all the weighings of the shale, weighings and measurements of the crude products, and subsequent analyses. The Samples tested were:-
1. From “Broxburn” Seam on Hermand Estate.
2. From “Fell’s” Seam on Breich Estate.
3. From “Dunnet’s” Seam on Hermand Estate.

The results were as follows:- 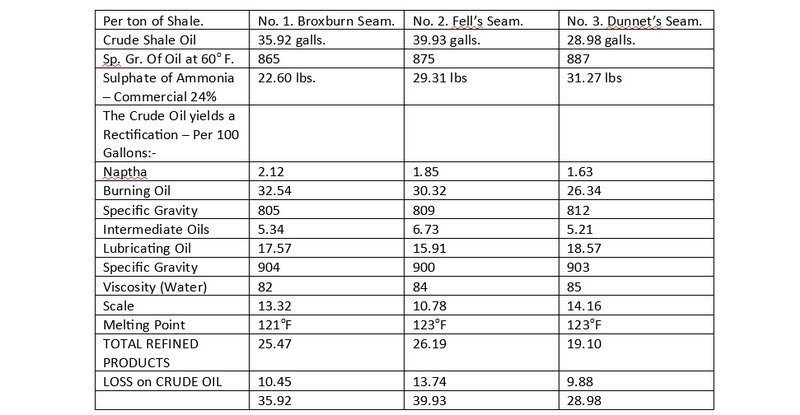 BROXBURN SHALE SEAM.- This Mineral was in good condition, was readily distilled in upright retorts, and yielded a Crude Oil of high-class quality, which was readily purified. The Crude Oil possessed a light green colour, and was practically free from taste. The loss on refining the Crude Oil was small, and the products were of the best class.

FELL’S SHALE.- The sample was distilled without difficulty, and gave a first-class quality of Crude Oil, with a light green tint, and free from taste. The Refined Oils were of good colour, whilst the loss was not greater than is usual with oil obtained from Fell’s Shale Seam.

DUNNET’S SHALE.- The sample was considerably weathered, but yielded products readily when placed in the retort. The Crude Oil was green in colour abd of good quality. The products obtained after refining were of first-class quality, both as regards colour and smell.

ESTIMATE of the VALUE of PRODUCTS (as obtained by the above Analysis) and COST of MANUFACTURE, with RESULTING PROFIT. 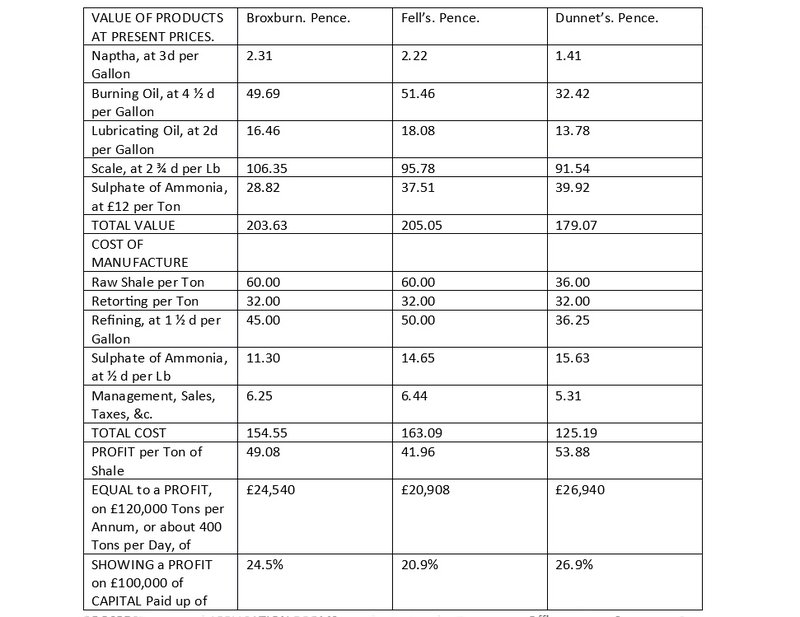 PROSPECTUSES and APPLICATION FORMS may be had at the Temporary Offices of the Company- 20 GEORGE STREET, EDINBURGH, 11 WEST REGENT STREET, GLASGOW: or from the Company’s Bankers- THE COMMERCIAL BANK OF SCOTLAND (LIMITED), HEAD OFFICE and BRANCHES

The directors of the WALKINSHAW OIL COMPANY (LIMITED) have issued the following report to their shareholders:-