A public company formed to progress mineral leases and other works held by William Anderson, coalmaster and provost of Wishaw. The prospectus (see below) refers to mineral leases at Holmes, Goshen and Dalmahoy, the later appears never to have been worked. The company produced only crude oil which was sold to others (notably the Linlithgow Oil Co. Ltd) for refining.

The Holmes company was wound up by order of the court on 27th October 1900 in response to a petition by the mineral landlord. On 16th November 1903, the liquidator reported that he had realised the whole assets of the company, amounting to £1,200. There was obviously nothing left for the shareholders. Scotland's First Oil Boom, The Scottish Shale-Oil Industry, 1851-1914, John McKay, Page 105

In a Note presented to the Court of Session (Lord Stormonth-Darling, Ordinary.—Mr. M'Caul, Clerk), by James Maxtone Graham, Chartered Accountant, Edinburgh, the Official Liquidator of the above Company, for approval of Deliverances, &c., the following Order has been pronounced:— "13th March 1903.— Lord Stormonth-Darling—Act. Balfour.—

The Lord Ordinary having heard Counsel,appoints advertisement and intimation of the Note for the Liquidator, No. 41 of Process, to be made as craved, in so far as the same relates to the first three heads of the prayer annexed thereto, and allows all parties interested to lodge Answers, if so advised, within seven days after such advertisement and intimation; grants he authorities craved in the fourth and fifth heads of the said prayer, and decerns."MOIR T. STORMONTH-DARLING."

THE HOLMES OIL COMPANY (LIMITED). CAPITAL, £100,000, in 10,000 shares of £10 each SUBSCRIPTIONS are invited for 6750 SHARES of the Company. Deposit, £1 per Share on application, £1 On allotment and the remainder in future calls not exceeding £2 per Share at intervals not less than Two Months. It is expected that not more than £3 per Share will require to be called up. 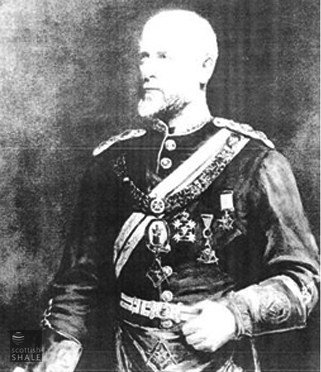 This Company is being formed to acquire and work the Shales in (1) The Estate of Holmes and Goshen, the property of Robert Bell. Esq., of Broxburn, as presently held under a 31 years' Lease by William Anderson Coalmaster, Wishaw, and (2) a portion of the Estate of Dalmahoy. the property of the Right Honourable the Earl of Morton as presently held under a 31 year Missive of Lease by the said William Anderson, and to carry on the business of Manufacturers of Mineral Oils and the products thereof. The Shalefields of the company extend for 1129 acres and have excellent railway facilities. On the estate of Holmes and Goshen , where there is an abundant supply of water, it is intended to erect Retorts, Refining. Plant, and all necessary Works of the most approved description, capable of distilling and refining at least 250 tons of Shale per day.

The Fields of the Company are situated in a district well known for its valuable shales, bring in the immediate vicinity of the Fields of the Broxburn, Pumpherston. and Oakbank Oil Companies. In the Dalmahoy Field the Houston Coal. which overlies all the West Calder, Broxburn, and Dunnet Shales, is seen cropping out at the burn which passes through the property. In the Holmes and Goshen field, John R. Williamson Esq. M.P. Edinburgh has carefully examined the shales and the results are highly satisfactory. His estimate as regards the Holmes and Goshen alone is 2.25 millions of tons of shale, equivalent to fully 250 tons a day for 31 years. The Holmes and Goshen Sha1es have born tested in a practical way at the Oakbank Oil Works with excellent results both as regards the quality and quality of the Oil, the large yield of Paraffin Scale and Sulphate of Ammonia being especially noticeable. It is expected that the Works will be so advanced as to admit of the manufacture of the various products in time for next winter's trade.

The Oil Industry is at present in a most healthy condition, as is sees from the price of the Shares of the different Oil Companies. This Company, it is believed, will be in a a good position f or doing a good position for doing a large and ruminative business having the following advantaged and elements of success:

The price payable to the vendor is £10,000 which will be taken in 1250 shares of the Company at £3 paid. The capital requirements are estimated as follows:

The Memorandum and Articles of Association of the Company, together with copies of the above-mentioned Lease and Missive of Lease, and the principle Provisional Agreement may he seen in the Office of the Company. If no allotment is made, the full amount of the Deposit will be returned.