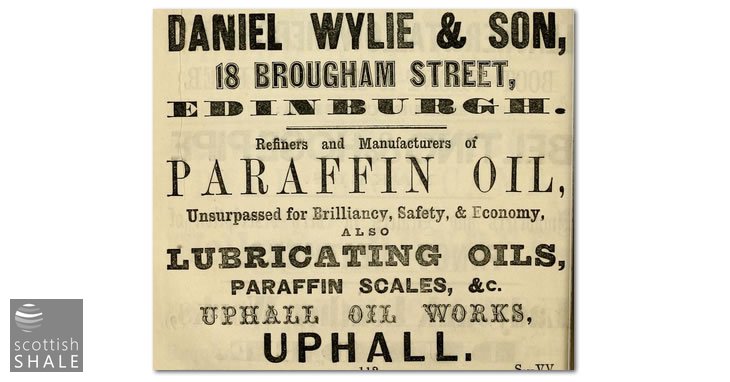 DISSOLUTION OF COPARTNERY. The Company Concern of WYLIE & DAVIE, Ironfounders in Stirling, carried on by the Subscribers, the sole Partners thereof, was of this date DISSOLVED by mutual consent. The Subscriber, James Davie, is authorised to collect the Company's outstanding accounts, and he will pay all their debts.

ALL Parties having CLAIMS against the Estate of the Late DANIEL WYLIE, sometime Iron-founder in Stirling, afterwards Paraffine Oil Maker at Uphall near Broxburn, and residing in Edinburgh, are requested to lodge within One Month, their Claims with the Subscriber: and to all Parties DUE the said estate are requested, within the like period to pay their Debts to the Subscriber.

In an Application to the Commissary of Edinburgh, at the instance of Mrs Jake Henderson or Wylie, Executrix-dative qua relict of the late DANIEL WYLIE, Chemical Manufacturer, Uphall Chemical Works, Broxburn, near Linlithgow, and residing at 18 Brougham Street, Edinburgh, praying his Lordship to restrict the sum for which she shall find Caution, as Executrix foresaid, to the sum of £260, the Commissary has appointed intimation of the Petition to be made in the Edinburgh Evening Courant and North British Advertiser Newspapers, that all interested may be certiorated of the same; and ordained any person having objections to the prayer of the Petition being granted to lodge the same with the Clerk of Court, within Ten Days from the date of the Advertisement: Of all which, Intimation is hereby accordingly made. JAMES A. ROBERTSON, Solicitor. Edinburgh, November 1866.