A remarkable business, established in the early 1850's, that quickly developed into operators of one of Britain's earliest oil refineries. The Forth Bank works, on a waterfront site in the port of Stirling, was well placed for delivery of imported crude oils brought up the River Forth by lighter, or home produced crude oils transported by canal and shipped out from Grangemouth, or transported by rail.

The location close to the town of Stirling soon resulted in complaints about smell and pollution, and in an attempt to avoid legal action the company constructed a further refinery in the Stirlingshire countryside at Ballat., near Balfron.

The company appear to have been unprepared for the collapse in oil price during 1866, and failed leaving a large stock of refined products. Shand's collapse in turn adversely affected the fortunes of crude oil suppliers leading to a wave of further bankruptcies. Although the company's assets were sequestered at the end of 1866, the business appears to have continued into 1869. 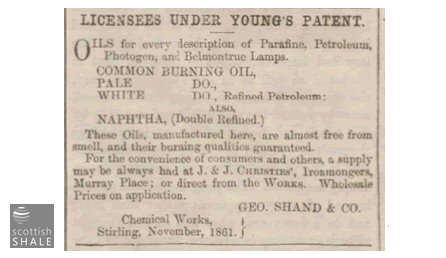 From the Stirling Observer, 7th November 1861

On Tuesday, Messrs Shand & Co announced by circular to their creditors that in consequence of the present extraordinary depression of the Petroleum Mineral Oil Trade, they had been advised to convene a meeting of all parties having claims against them for the purpose of considering what course should followed the circumstances. The liabilities are estimated at £100,000, the assets £150,000, but although there is thus a very considerable surplus such is the state of the market, taken in connection with the season of the year, that it has been found necessary to suspend payment the meantime to avoid sacrificing the interests of creditors.

As showing the extraordinary fall in prices which has mainly brought about the present crisis, we observe from the " Liverpool General Broker's Association" circular for last month, that while at this time last year the price of refined oil per gal. was from 3s. 45., it now as low as from 1s. 5d to 1s 7d. understand that in consequence of this immense reduction in prices, many parties have not taken up their contracts for oil, and thus have not only left Messrs Shand with unusually large stock, but greatly aided in embarrassing the business operations of the firm. A meeting of creditors, to be held in Glasgow, is called for to-morrow and we trust that considering the large number of men employed every effort will be made to carry on the works.

Upwards of £250 are paid in wages each week by Messrs Shand & Co., and it can easily be imagined the vast amount of distress, which the stoppage of their works, at this season of the year, would cause among the labouring class in town. From what we have learned, it would appear that all that wanted time to realize the large stock on hand, and we hope that the creditors will find it prudent to carry on the works.

The Estates of George Shand & Co., Manufacturing Chemists and Oil Refiners of Stirling and Balfron, as a Company, and of George Shand, William Jack, and Thomas Burns, all residing in Stirling, the Individual Partners thereof, as such Partners, and as Individuals, were sequestrated on the 8th day of December 1866, by the Court of Session. The first deliverance is dated 8th December 1866. The meeting to elect a Trustee for all the estates, or separate Trustees on the estates of the Company, and on the estates of all or each of the Individual Partners, or Trustees in succession, and Commissioners, is to be held on Tuesday the 18th Day of December 1866, at 12 o'clock noon, within the Faculty Hall, St George's Place, Glasgow. A composition may be offered at this meeting; and to entitle Creditors to the first dividend, their oaths and grounds of debt must be lodged on or before the 8th Day of April 1867. The Sequestration has been remitted to the Sheriff Court of the County of Lanark. A Warrant of Protection has been granted to the Individual Bankrupts. All future Advertisements relating to this sequestration will be published in the Edinburgh Gazette alone, HILL, REID, & DRUMMOND, W.S., 42, Frederick Street, Edinburgh.

SEQUESTRATION of GEORGE SHAND & COMPANY, Manufacturing Chemists and Oil Refiners at Stirling and Balfron, as a Company, and George Shand, William Jack, and Thomas Burns, all residing in Stirling, the Individual Partners thereof, as such Partners, and as Individuals. We, the Commissioners have audited my accounts of intromissions, brought down to the 8th current, and postponed declaring a dividend till the recurrence of the next statutory period.