James Palmer (c.1800-1862) is first listed in directores as an "oil merchant" from 1858. James Palmer & Co.is listed as an "oil refiner" in 1863 and from 1864 as an oil, soap and grease manufacture, operating from works in the established industrial area of Anderston. James Palmer died in 1862, leaving a personal estate of £1,988. The rapid growth of the company seems to have been driven by James Page; possibly the son in law of the founder, as he shared an address with Sophia, James Palmer's widow

The company seems to have built an oil works on Crown Point Road; an emerging industrial area in the east end of Glasgow. The company established crude oil works at Drumgray late in 1865, but these were disposed of soon after a short period. In mid-1866 an oil works was established at Drumcross, on land leased from Lester Wylie & Co. but the collapse in the price of oil meant that these never operated at a profit, and the company was declared bankrupt the following year.

Examination in the sequestration of James Palmer & Co. Paraffin Oil Distillers, Crown Point Oil Works, Glasgow, and at Bathgate. The partners of the bankrupt firm were James Page, and Mrs Sophia Austin Morgan or Palmer, sederunt – Mr Alexander Moore, Accountant, trustee; Mr John Naismith, writer, agent in the sequestration; and Mr Arthur Alison, writer for creditors. James Page, one of the bankrupts, deponed – I and Mrs Palmer are the sole partners of the bankrupt firm of James Palmer & Co.

In June or July, 1865, we entered into the Paraffin Oil trade. At that time we commenced to erect our present refining works. The management of the business has through out been in my hands. When we commenced the Paraffin Oil trade we had a capital of £3000. It consisted of £700 of a loan, under the recent Partnership Act, received from Mr William Lester; £300 borrowed by Mrs Palmer from private friends, and which is still unpaid; and £2000, which the firm had at that date. The firm had not at the date mentioned that amount of cash, but the assets exceeded the liabilities to the extent stated.

We had previously been in business as general oil merchants and soap manufacturers, in which business had been successful. Towards the end of 1865 we erected 30 retorts, for the manufacture of crude oil, at Drumgray near Airdrie, which we shortly afterwards disposed of to the lessee of the minerals, accepting as part of payment 100,000 gallons of crude oil to be delivered in monthly quantities. If the crude oil had maintained the price at which it stood when this arrangement was made, we would have made a profit of £2000 by the transaction. The whole of the oil in payment of the works has been delivered. After we had got about half the quantity the market fell; still we made some profit.

In June or July last year we erected 20 retorts at Drumcross, near Bathgate, upon ground near the pits of Messrs Lester, Wylie & Co. with whom we had an arrangement for shale of a given quality at a fixed lordship per gallon of crude oil produced. Our intention was to have erected 80 retorts there, but by the time the first 20 were put up the market gave way, and has since continued in a very depressing state, and prevented out ever working these retorts to a profit. We also entered into contracts with several crude oil makers to supply us with crude oil at prices varying from 8d to 9d per gallon, in the expectation that the market, would remain firm for refined oil, instead of which it gradually fell in price, so that upon several sales of the refined oil we did not realise more than crude oil costs.

In January last we found difficult in meeting out current payments, and a state of our affairs was then prepared, which showed a surprise of a large amount. The works, which were still new, and in full working order, were put in at cost price, and our stock at prices corresponding to the cost of the crude material and the expense of manufacture. It was then hoped an improvement would take place in the market, that we would be enabled to pay our creditors in full, and continue business. With this view an arrangement was effected by which our creditors agreed to allow six, twelve, and eighteen months to pay our debts. This arrangement applied only to debts exceeding £50. Smaller debts had to be paid as the fell due. But the continued depression of the market having rendered this hopeless, we called a meeting of our creditors.

A state of our affairs was laid before them, which showed a deficiency, in place of the apparent surplus in January. The state of our affairs given in by us at the first meeting of our creditors under the sequestration is, I believe, substantially correct. The stock of oil on hand is therein valued at present price. To account for our present position and the differences between the two states of affairs, I have made up and handed a statement to the trustees.

Mrs Palmer, the other partner of the bankrupt firm, deponed – I took no part in the management of the affairs of James Palmer & Co. I know nothing about the business except through Mr Page. This closed the examination, and the statutory oath was emitted by the bankrupts. 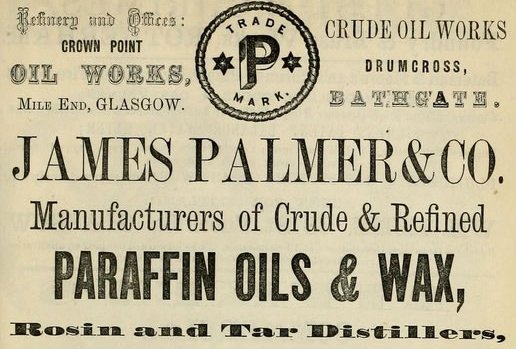