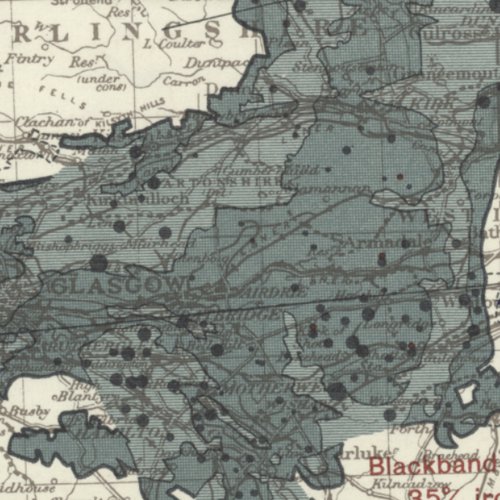 Various seams of coal shale were worked alongside coal or ironstone in various parts of Lanarkshire.

"Special Reports of the Minerals Resouces of Great Britain. Vol.XXIV, Cannel Coals", published by the Geological Survey in 1915" states

"The Kiltongue Musselband Shale and ironstone occurs over the whole of the Central Coalfield and has been worked for oil, and also been tried as a possible source of iron. It lies towards the middle of the Productive Coal Measures, a few fathoms above the Kiltongue Coal. The seam has been worked for the extraction of oil in the Rawyards-Clarkston area, where it is said to have yielded 30 ga1ls. of oil per ton, the chief localities being Rochsoles, Ryden, Raebog, Glenmavis. It was also wrought in the Greengairs­ - Longriggend field at West Glentore, Greendykeside, and Arden; in the Larkhall district at Swinhill, Kittymuir, and Birkenshaw, where the yield was 23 galls. a ton. Attempts to work the shale were also made on a small scale at Southfield, in the Slamannan district."

"The cannel shale is tough, with a dull lustre; ' curls ' readily and has a brownish streak."

"The Virtuewell Coal has generally a thin shale roof. This shale has been locally found rich enough and of sufficiently good quality to be worked along with the coal. It is best developed in the districts of Slamannan, Longriggend, Greengairs and Rawyards, where it varied from 5 to 15 inches, and was formerly taken out along with the coal and used for gas making as well as a source of oil. The Virtuewell Coal, 2½ to 3 ft. thick, is now practically exhausted. In the Motherwell area a thin parrot shale occurs as a roof to the Virtuewell Coal and was formerly used for the distillation of oil. The old Stanrigg Oil Works, between Airdrie and Longriggend, were set up to treat this shale."

"The Splint Coal, now approaching exhaustion, characteristically contains a band of gas coal of variable thickness, varying between 4 in. and one foot. The presence of gas coal as a constituent of the Splint Coal, is also typical of the Bothwell- Uddingston area, i.e., at Greenfield, Hamilton Palace, Viewpark, Tannochside. In part of the Bredisholm field it was distilled for oil, the yield being about 32 galls. per ton."

The Rochsoles Gas Coal is mineral nearly allied to the celebrated Boghead coal, and produces a rich return in gas. As this class of coal is becoming year by year more scarce, its value has been enhanced and it is well known that the output of the best kinds has been contracted for while the seams las'. tho other hand, several new pits have been opened, whose produce would have naturally come in to supply the deficiency; but these were conserved for oil distillation, and the overplus of the old works was as anxiously secured for the same purpose. Since that time oil distillation has nearly ceased, aud the proprietors of various seams gas coal are now freely offering their mineral for sale.

By analysis of some Scotch gas coals, Prof. Fyfe, of Aberdeen, supplies the following results:

Mr Young, of Dalkeith Gasworks, subjected 26 cwts. of the Rochsoles coal to the test, and found that it yielded 11,902 cubic feet of gas to tbe ton of coal. This proves its superiority to both Arniston and Lesmahagow, and believe the proprietors are willing to offer it on moderate terms. As the full analysis of this coal may prove satisfactory to our readers, we give it detail :— commercial sample of Rochsoles gas coal, consisting of 26 cwts., was received here on the 20th ult. for analysis for gas, from Messrs James Struthers & Co., Rochsoles Colliery, Airdrie. The following deductions were made from working the entire sample, as in the ordinary practice in gas-making ; 6000 cubic feet of the gas was stered for examination ; 1000 parts of the coal gave the following :—