The last and the largest of the coal-oil works, producing crude oil and refined products from local coals. Redwood (writing in 1897) notes that "Stanrigg Oil Works, operated by Black, were started in 1865 and are still going."

Oilshale of Lothians states "… among the latter was included about fifty Stanrigg retorts, remarkable for their simple construction and large throughput (as much as 12 tons a day) used on the Musselband of the coalfields and Lilles shale in Renfrewshire." 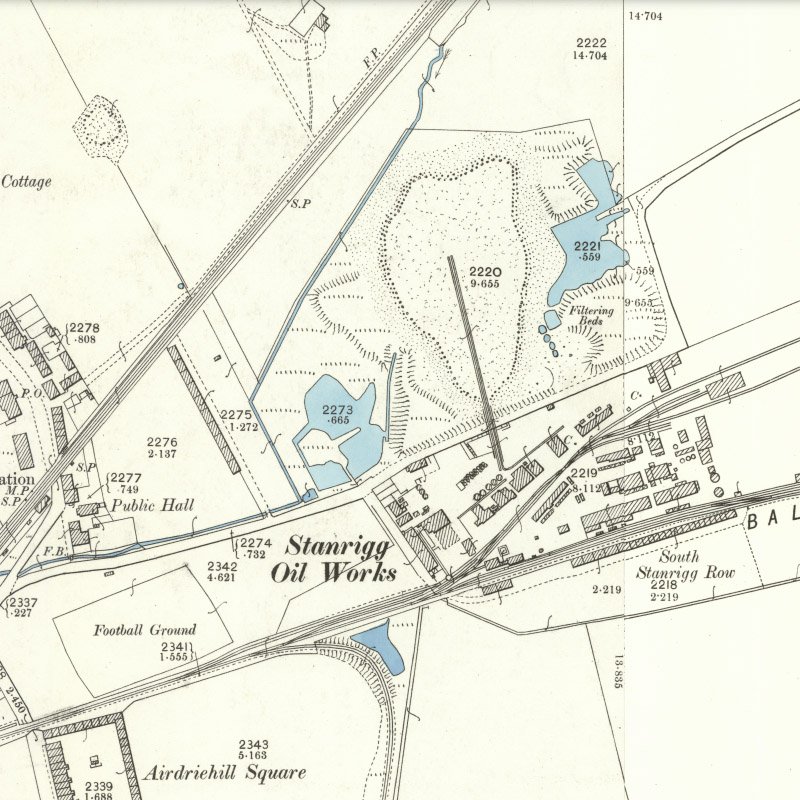 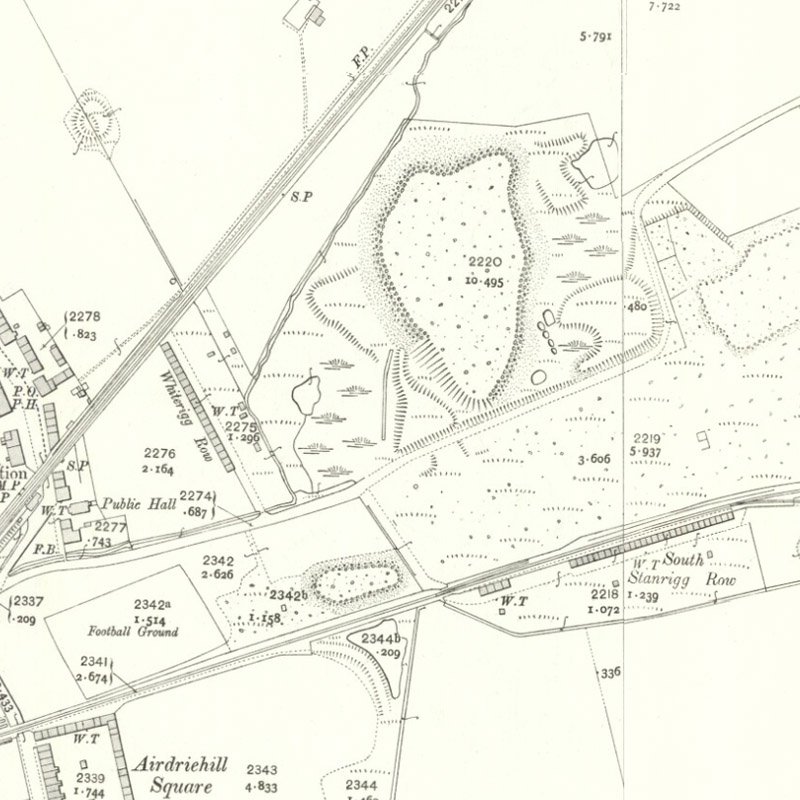 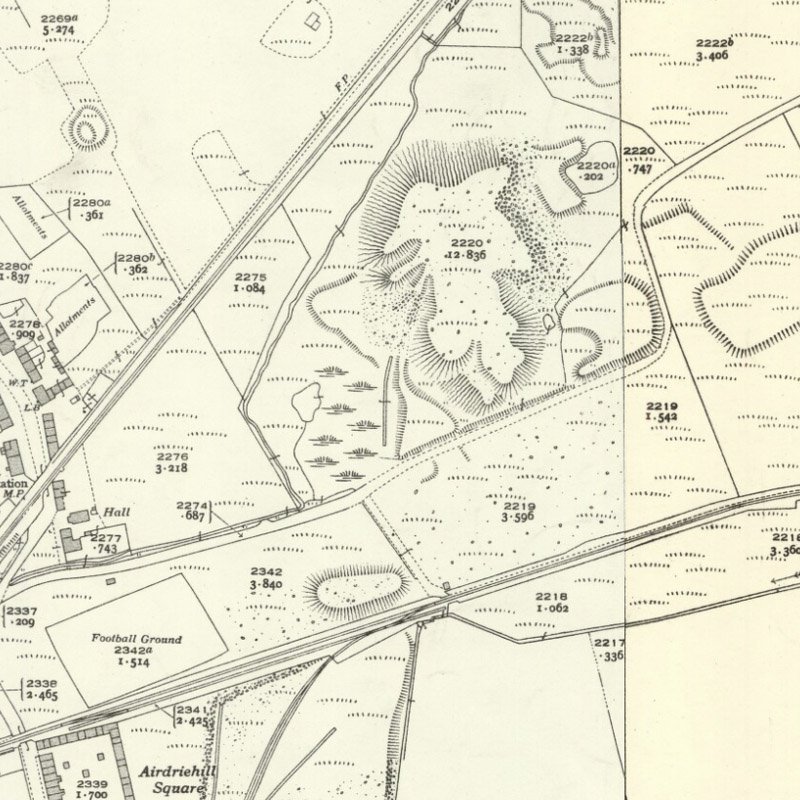 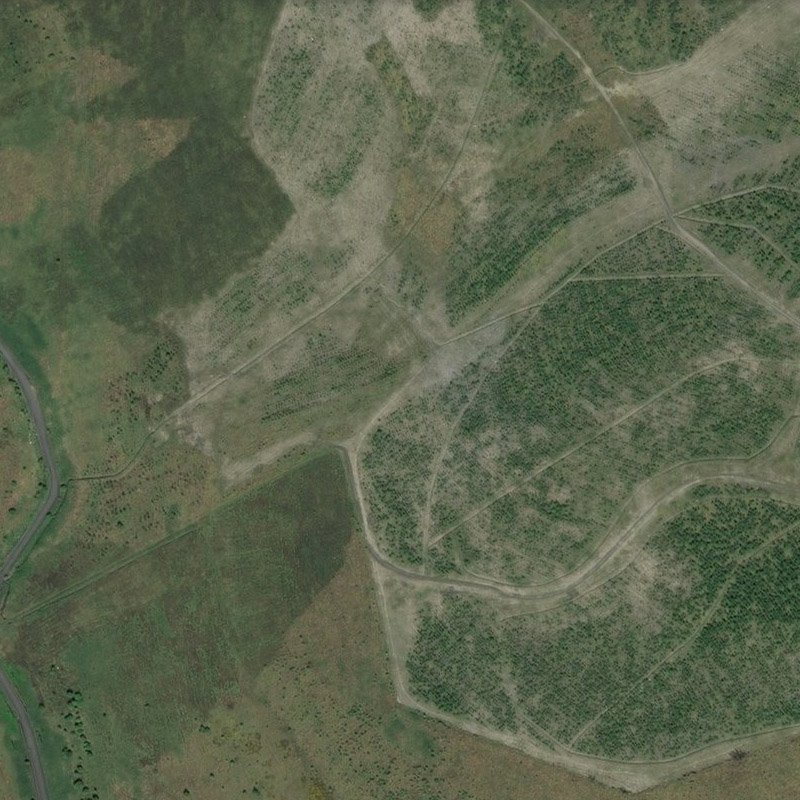 FIRE AT AN OIL WORKS

About four o'clock yesterday morning (Tuesday) fire accidentally broke out in Whiterigg Oil Works, Whiterigg, belonging to William Black, Esq., coalmaster, there. The fire originated in one of the retorts, and speedily communicated with the stock of manufactured oil, the most of which was barrelled. Out of 21 retorts, 16 were partially destroyed, and 2000 gallons of oil consumed in the conflagration. The fire lasted for about four hours, and through the activity of William Black jun., and a number of workmen, Captain Clark, and some constables, a considerable quantity of barrelled oil was secured. The loss is estimated at about £300.

The demand for oil is increasing and the Airdrie Oil Works, which have been standing for some time, have again resumed operations. The Stanrigg Oil Company, through the active superintendence of Mr Jeffrey, an now produce an oil of greatly superior quality to the best American and for which a higher price is now obtained.

Messrs. William Black and Sons, of Stanrigg, Airdrie, have leased from Mr Spier about 400 acres of minerals on his estate at Blackstone, in the Johnstone Area. The minerals comprise ironstone, shale, and coal.

AIRDRIE-Fatal Result of an Accident.

Yesterday, Mr David Crann, plumber, died from the result of injuries sustained by him last week. He, along with one of his workmen, had been repairing some. pipes at Stanrigg Oil Works, when the pipe burst, and all the workmen were slightly burned about the face and neek. Their injuries were considered very slight; but Crann seems to have got some internal shock or injury.

Whiterigg, belonging to Messrs Black & Co., is a large village, consisting, for the most part, of new brick rows, and a large square, also new, called Airdriehill Square. These are excellent two-roomed houses, with 7 wash-houses and ashpits and closets behind. The rent is 2s a week. There is, however, an old row in Whiterigg, consisting of very inferior houses. There are no back windows, and the interiors are poor in the extreme, both as to accommodation and furniture. Everybody declares that they are not fit for human beings to stay in, and I quite agree with everybody. They are not decently habitable even for Irish human beings, the least tidy of the mining class, who seem to keep this row all to themselves. Pit water is used at Whiterigg.

On Sunday afternoon a rather alarming fire broke out at Stanrigg Oilworks, the property of Messrs William Black & Sons. Some of the men had been engaged in running of a quantity of waste pitch tar, when, from some cause unexplainable, unless, as the manager suspects, by spontaneous combustion, it took fire, and the burning fluid speedily came in contact with two dwelling-houses immediately adjoining the works, and before assistance could be got they were burned to the ground, the whole of the furniture of the families who occupied the houses being likewise destroyed.

Although considerable alarm was at first felt, in case the fire might spread to the benzoline store, the admirable precautions taken by Mr Dunlop, who had a pit dug close by the spot where the pitch was being run oft, and into this pit, which is partly filled with water, the burning fluid found its way, and was speedily extinguished. The damage will not amount to more than £100; but something might be done for the two burned-out families.

AIRDRIE "CREESH BEFORE THE FLOOD !

At a meeting of the Geological Society of Glasgow, Mr Robert Dunlop, of Stanrigg Oil Works, exhibited specimens of fossil paraffin from Airdrie, where it is rarely found. It appears to be a product of distillation from oilbearing strata at a time when they were exposed to heat from intrusive igneous rocks. A miner's opinion of it was pithily expressed when he said he thought " it was some of the creesh left about the time of the Flood."

…..Mr ROBERT DUNLOP pointed out that at Stanrigg, oil or petroleum was got for a long time, and was utilised in the miners' lamps and in lubricating the machinery. Mr ROBERT PATTERSON also spoke on the mineral paraffins of the district. Mr ROBERT M'LAREN exhibited some characteristic Meiotic fossil ferns—Sphenopteris affinis of the lower carboniferous formation. These ferns are from the lowest shales worked. The, were very much altered. the carbon of the frons been replaced by sulpfide of iron. They are never found above the camps shale.

FIRE AT THE OIL WORKS

A fire took place at Stanrigg Oil Works on Thursday. It appears that workmen were at the time engaged taking down a dry retort, and one of their number who was cleaning some of the plates, set some tar on fire. The manager. however. at once took steps to have the fire extinguished and his efforts were successful, as the workmen soon managed to put it under. Airdrie Fire Brigade had been phoned for, but when it was seen that their services would not be required, a message was again sent to Airdrie to stop them. They were, however, by this time, well on their way. If the fire had not been so promptly put out, serious consequences might have been the result, as there are a lot of oil, tanks, etc, lying around. The damage done was not great.

In the Motherwell area a thin parrot shale occurs as a roof to the Virtuewell Coal and was formerly used in the distillation of oil. The old Stanrigg Oil Works between Airdrie and Longriggend were set up to treat this shale.