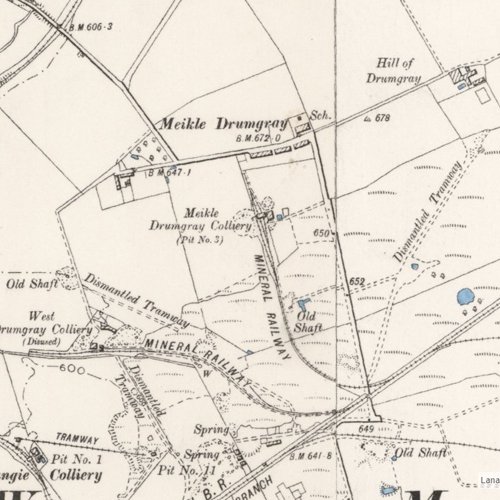 Redwood notes that Drumgray Oil Works, Greengairs, were operated by J. Rankin between 1864 and 1874. Bankruptcy hearings for the firm of James Palmer & Company indicated that they erected 40 retorts at Drumgray near Airdrie "towards the end of 1865" but shortly afterwards disposed of the minerals (see full text). There is no evidence however that these relate to the same site and it seems possible that the works at Drumgray described in the 1863 Scotsman article (see snippets below) were those we have listed as Greengairs Oil Works.

Mapped by the Ordnance Survey of c.1899, showing the Drumgray area. 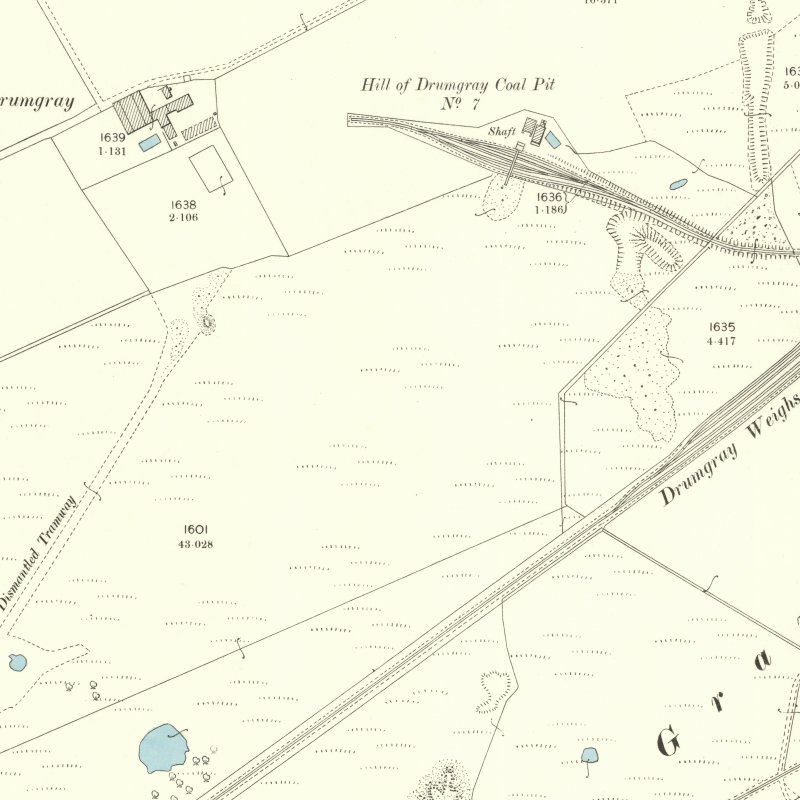 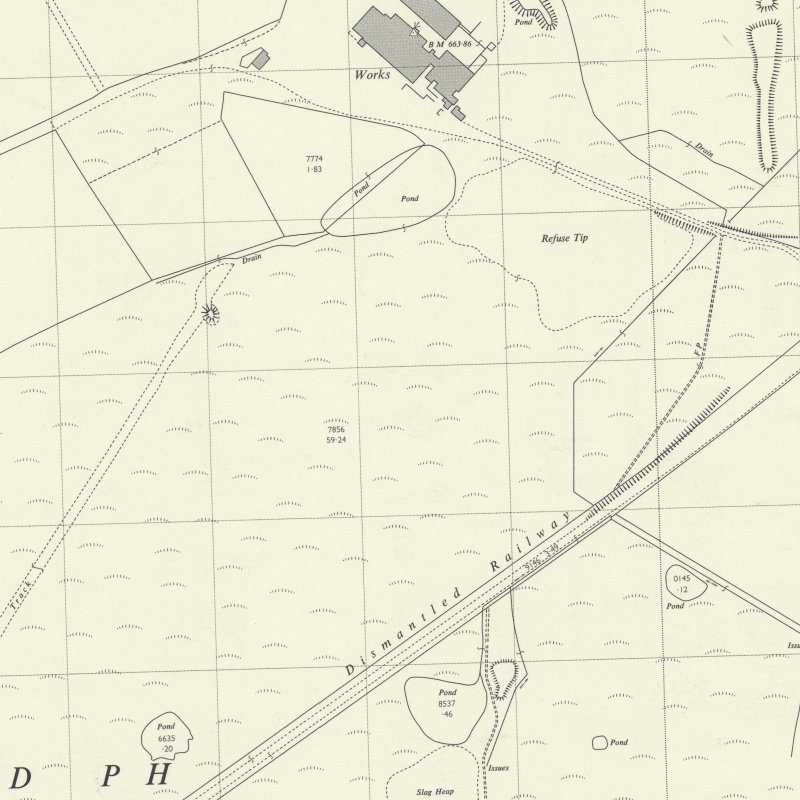 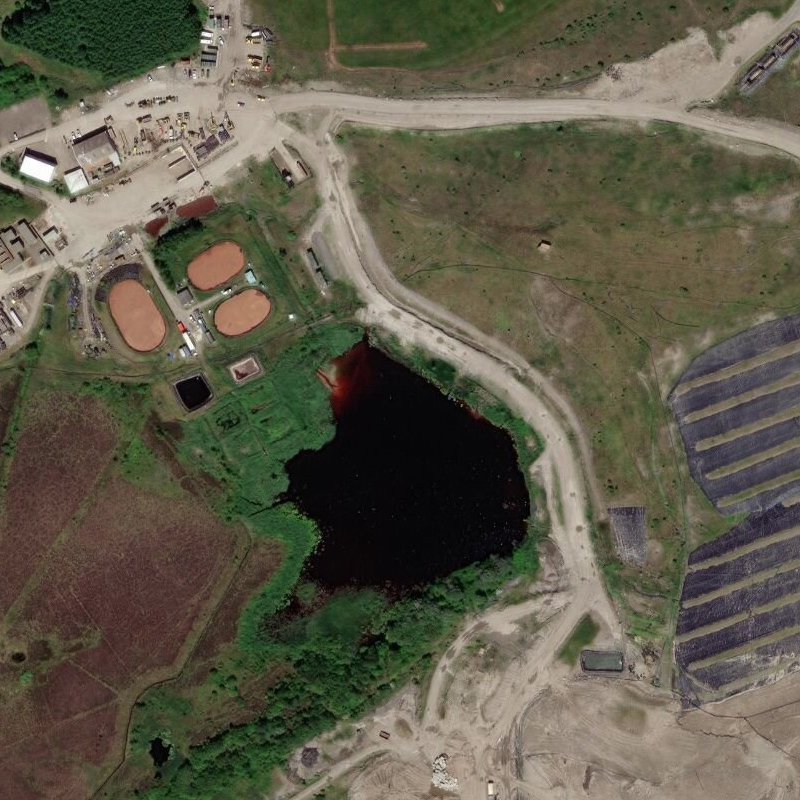 Vicinity of Drumgray - haymaking between the bings and landfill sites - view towards bings of Meikle Drumgray Colliery. Looking south. July 2011.

This trade is rapidly developing in the neighborhood of Airdrie. In addition to the large establishment at Palacecraig, apparatus on a very extensive scale of carrying on the process of distillation is in course of being erected at Drumgray, about three miles out of town, where beds of shale exist in almost inexhaustible quantity. The proprietors of the latter works are Messrs. Rankine & Mitchell of Airdrie, in conjunction with the Wareham Oil Company, a firm largely engaged in the trade in England. So much of the works have been already completed as to make a beginning of the manufacture, which is not however completed at Drumgray, the oil being simply distilled there and afterwards shipped via Bo'ness to Poole in England, to be refined.

The contractors for the Drumgray Works, Messrs. George Bennie & Co. Glasgow, who have erected most of the manufactories in the Bathgate district, have introduced a number of improvements in their own invention. Amongst these may be instanced the placing of the retorts upright instead of the horizontal position; they are fed from the top as occasion requires, and the refuse drawn from the bottom, the process of manufacture going on the while without interruption. The condensers are also on a novel principle securing more rapid and thorough condensation of the gaseous products of the shale, and an easy flow of the condensed matter into the receiving tank. Steam heated to a very high temperature in a "heater" is introduced into the retorts while distillation is going on with the great advantage to the manufacture. The produce is nearly doubled, the oil clarified, the disagreeable odour modified to a certain extent and the retort kept clean. Some of these improvements are being adopted at Palacecraig. A new work is about to be erected by the same contractors at Crofthead.

...Towards the end of 1865 we erected 30 retorts, for the manufacture of crude oil, at Drumgray near Airdrie, which we shortly afterwards disposed of to the lessee of the minerals, accepting as part of payment 100,000 gallons of crude oil to be delivered in monthly quantities...

My works are situated on the Hill Burn, a tributary of the Calder. Employ hands. Rateable value of works, 300/. The bed of the stream is not silted up. My works are not affected by floods. The condition of the stream has not changed within my knowledge. It is not polluted by works above, nor by mines. Obtain supply of water jointly from pits and from collected water on the Moss. Consume yearly, bituminous shale, 8,500 tons; sulphuric acid, 50 tons. Produce yearly 250,000 gallons of crude paraffin oil.

The whole of the liquid refuse produced flows into the stream. Produce yearly 3,000 tons of spent shale, which is stored in heaps upon adjacent land. Use steam, 10 nominal horse-power. Consume yearly 5,000 tons of coal, the ashes from which are deposited on the spent shale heap. The excrements of my workpeople are used for manure. Have no suggestions to offer.