"In 1886 the Hermand Oil Company, with a capital of £265,750, built a crude oil works at West Calder and did a fair business until it took the Walkinshaw Oil Company into amalgamation in 1890. The principal reason for the amalgamation was to secure the Walkinshaw Oil Company's refinery, which had been standing idle since 1886. It of course entailed the expenditure of a very large sum of money to put the refinery into working order, not to speak of the new and improved machinery that was bought to enable the company "to manufacture or refine oil as cheaply as its competitors", and, when everything was ready to start, the company concluded that, as market values had taken a sudden drop, they would close up both works until the market improved again. Both works are still closed !"

The Hermand Oil Company Ltd was established in 1885 to construct a new crude oil works at Breich, about a mile north of West Calder. Worker's housing was constructed at Mid Breich. The works were an initial success and by 1890, 120 retorts were in action. It was claimed that the design of these retorts contravened Young and Bielby's patent and following a lengthy court action, the company was forced to pay patent royalties. After several successful years of crude oil production, plans were drawn up in 1889 to build a refinery at Breich oil works so the company could manufacture a range of finished products. The company instead chose to take over Walkinshaw's disused refinery near Paisley, through merging the two companies in 1890. It seems likely that little crude oil was transported from Breich for refining at Paisley, due to the delay and cost of refurbishing the Walkinshaw's refinery, and the temporary closure of Breich oil works in 1892 following a significant fall in the price of oil.

The Briech oil works lay disused for eight years until the New Hermand Oil Co. Ltd. attempted to resume production using the original retorts and a stockpile of shale that had lain in the open for a considerable time. Many problems were encountered in repairing and restarting the antiquated Young and Bielby retorts and in 1901, a bench of 32 Pumpherston patent retorts were constructed. Plans were in hand to construct further new Pumpherston-style retorts when the decision was made to wind-up the company. Production ceased in 1903 and the company's assets were acquired by The Pumpherston Oil Co. Ltd. The new owners planned to exploit the Breich shalefield to feed its Seafield oil works, but had no interest in retaining the oil works at Breich, which were dismantled in 1903. The modern retorts were re-erected at Seafield. A fatality occured during this dismantling work. 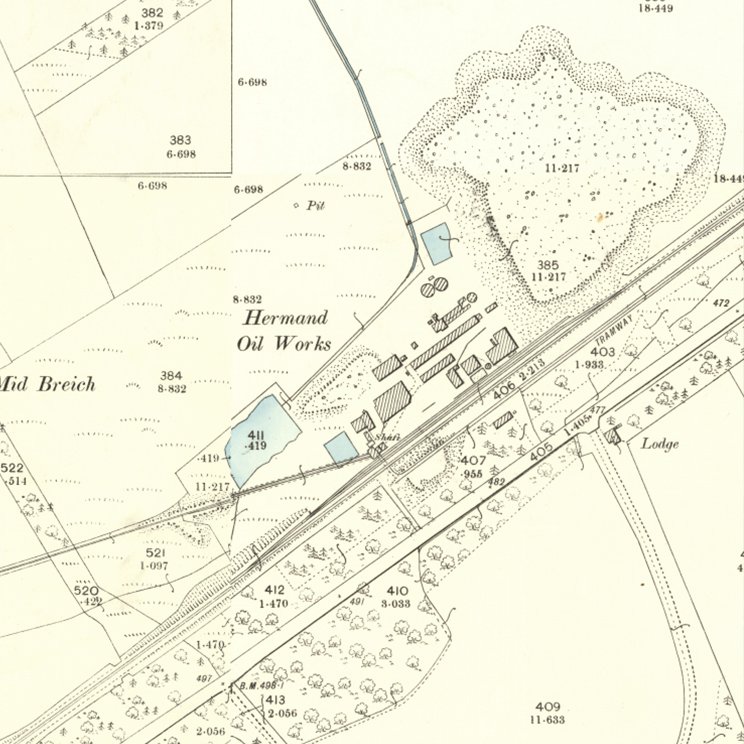 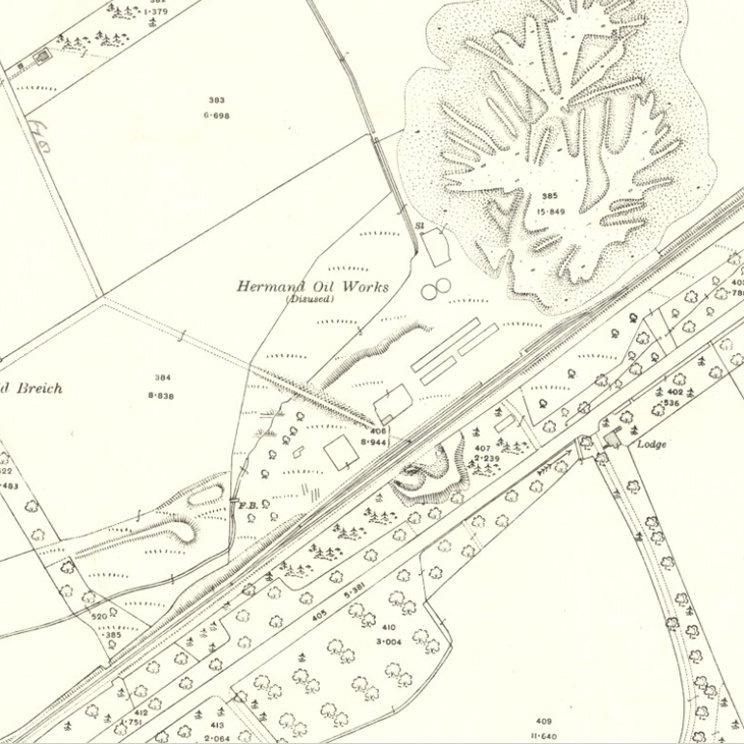 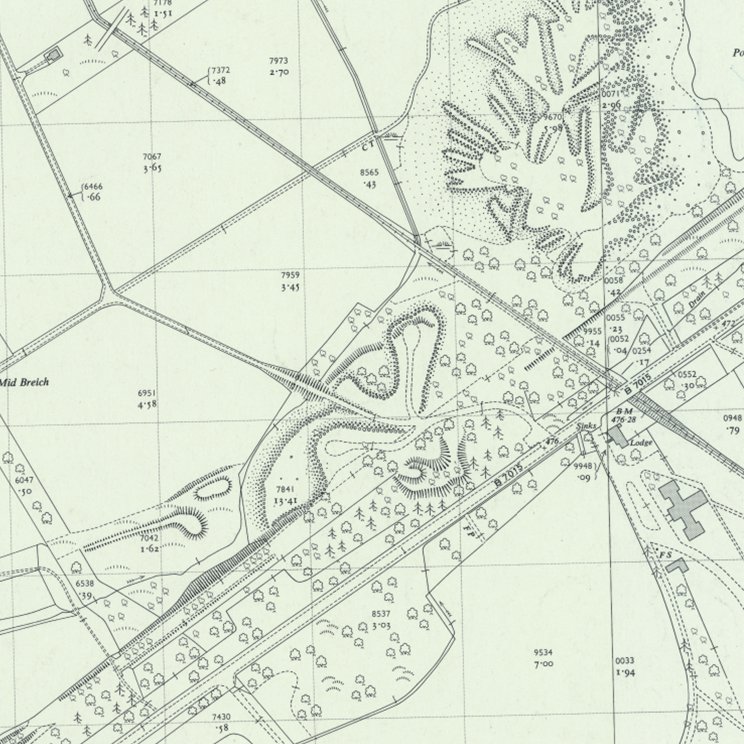 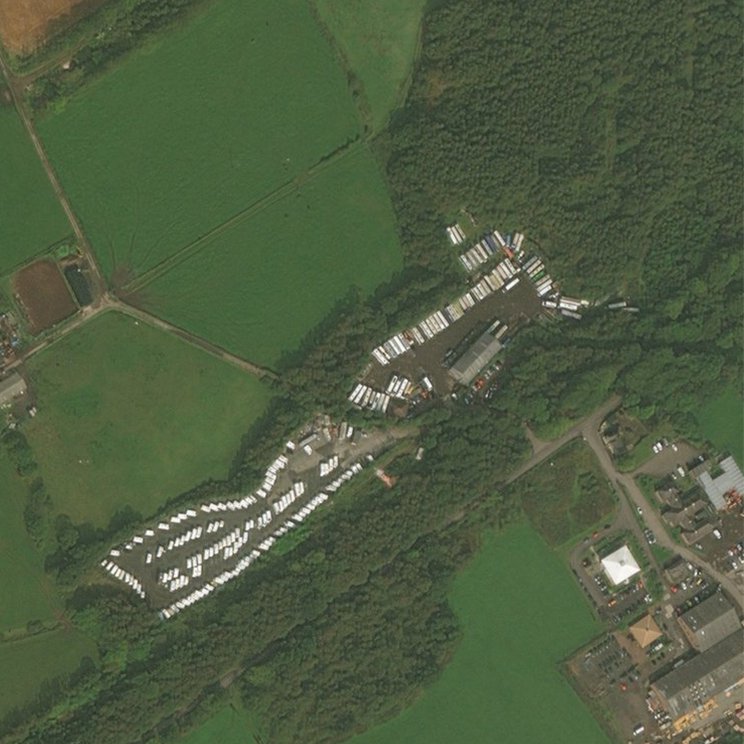 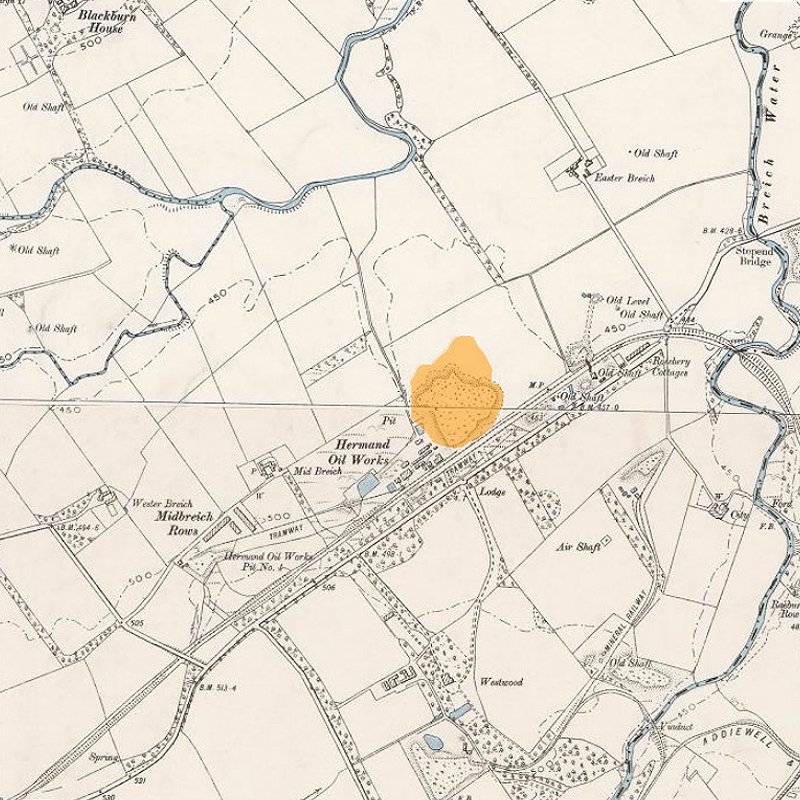 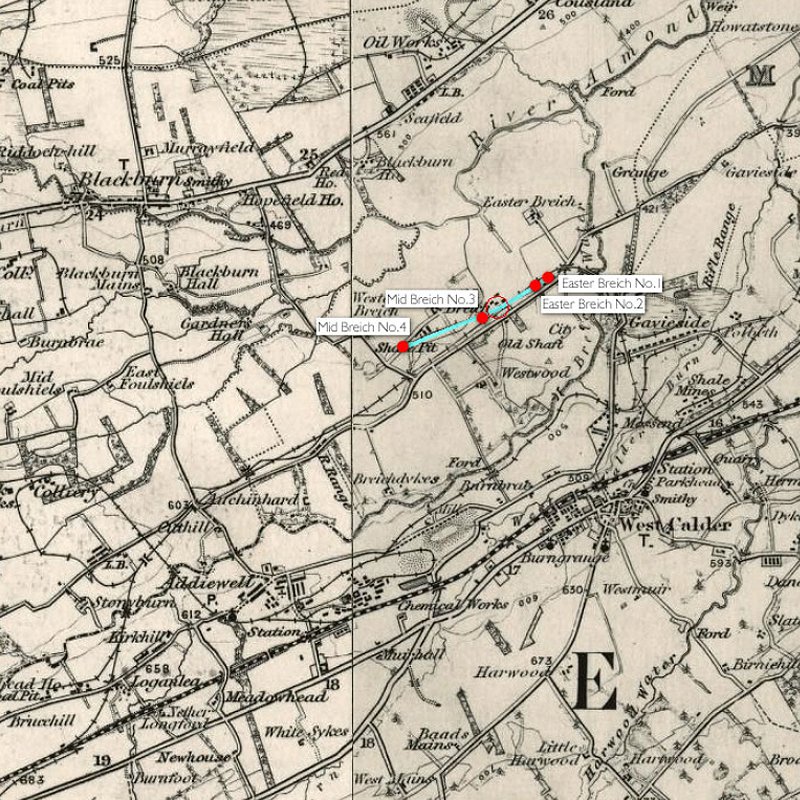 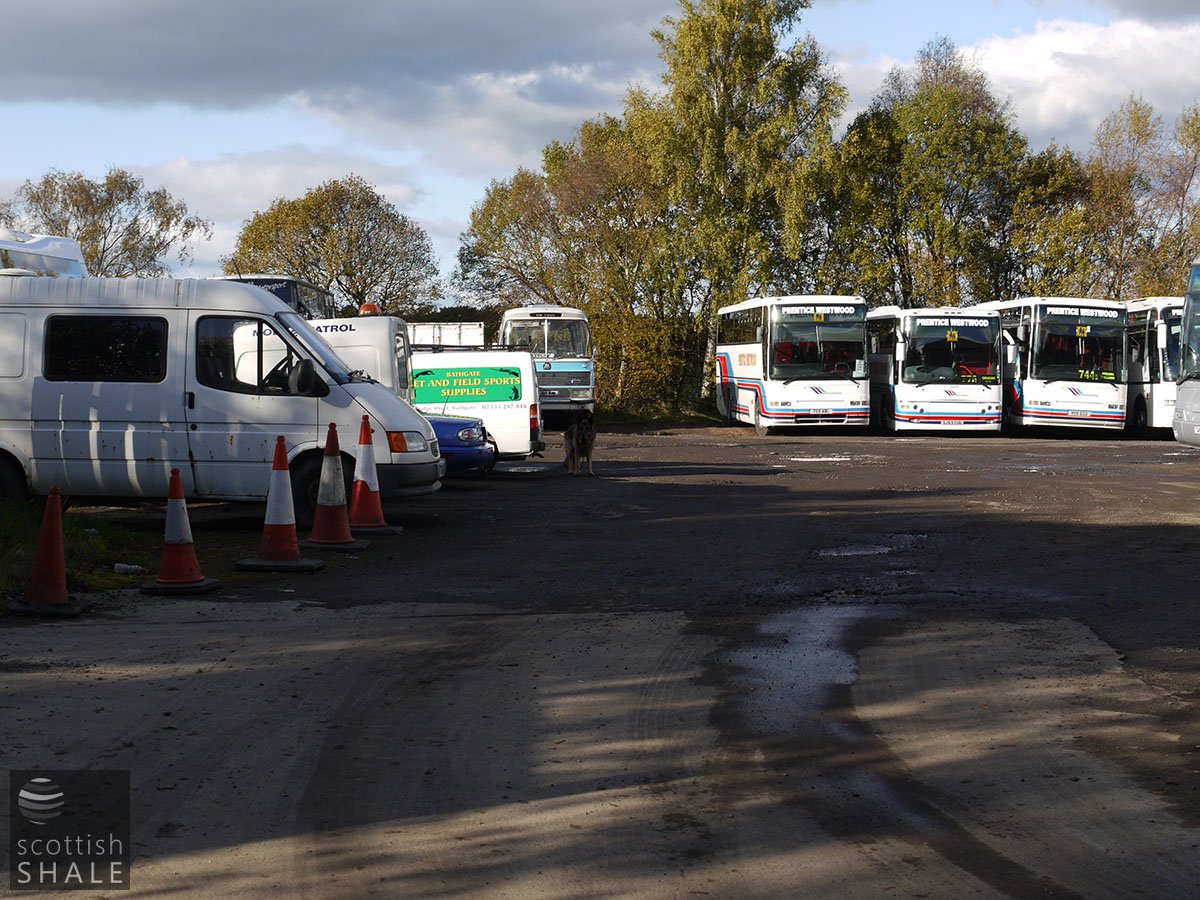 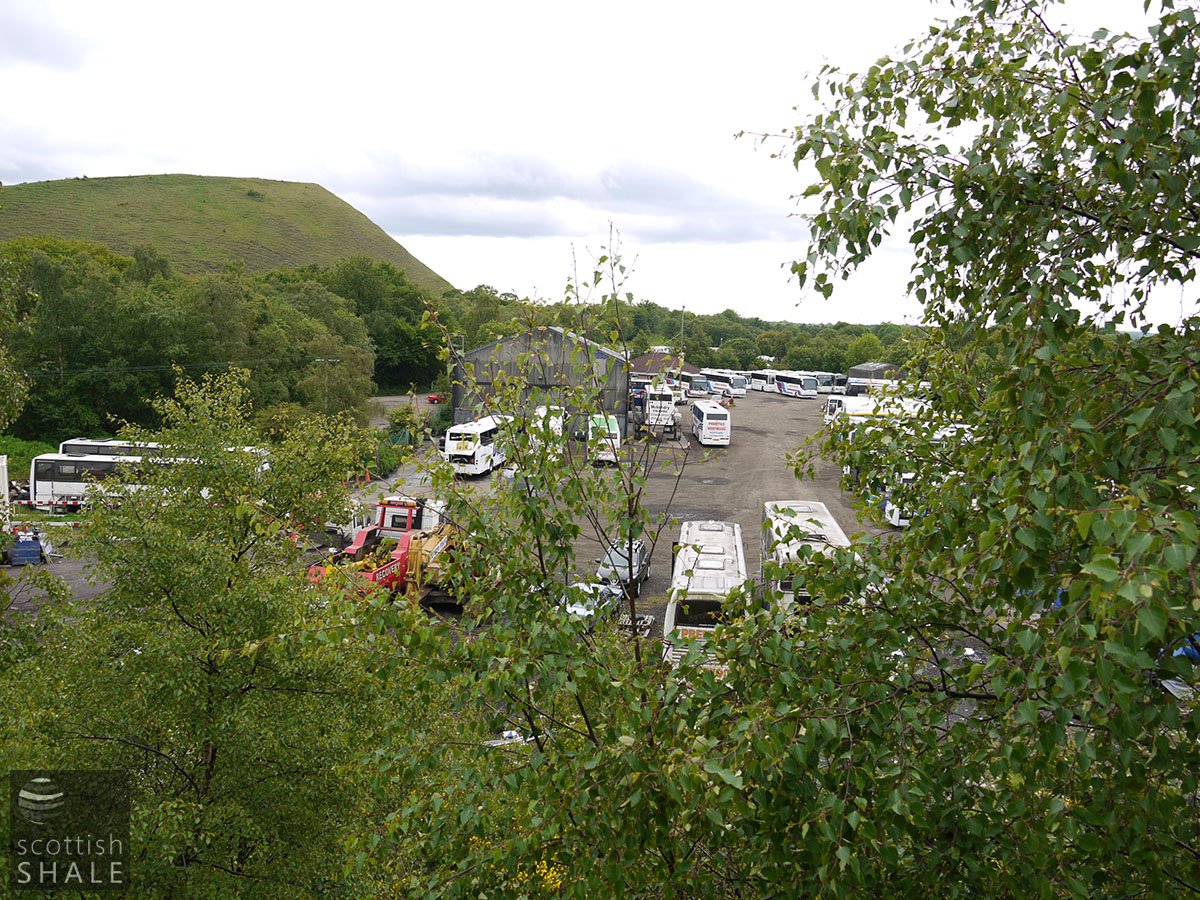 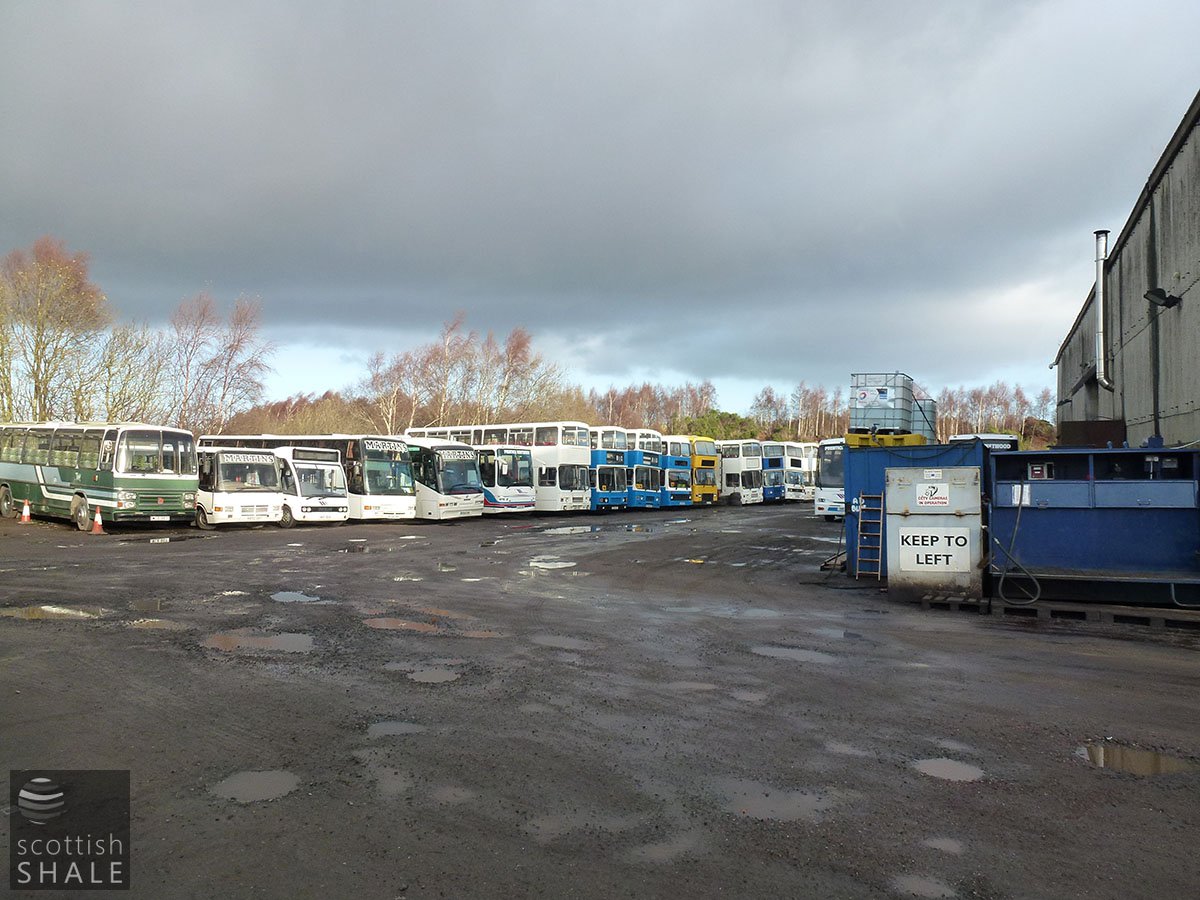 Breich Oilworks are to be restarted by the Hermand Oil Company. They have been standing idle for many years.

The new Hermand Oil Company have been busy of late, and the better prospects in the oil trade has made them push on with all repairs. They have now got all the retorts in working order—some 120 being now at work. They have also contracted with the Pumpherston Oil Coy. for the purchase of their crude oil. This, and the continued briskness in the coal trade, is causing prospects to look better in the district than they have done for some time.

After standing idle for about eight years this Company has recommenced operations, but, like Rip Van Winkle, it finds itself in a changed world. Retorts were in its day not very good at the best, but the Hermand Company had a special retort which was about the poorest in the trade. No wonder the directors complain of its inefficiency, and are disappointed with the yields of oil and ammonia.

If the retort compared badly with others a dozen years ago, the comparison now is almost ludicrous. The success of the Company is hopeless unless the antiquated plant can be replaced with retorts of the modern type. Money spent on the existing retorts will be merely wasted, and the chairman was justified in refusing to be a party to flogging a dead horse.

Oil companies have not for a long time had a prospect equal in hopefulness to the present, and Mr Fraser spoke from practical knowledge when he said that "if the Hermand Company was prepared to spend a sufficient sum of money to replace the plant and put the works upon the most modern lines, the Company would succeed." We hope therefore that the £25,000 preference shares will be subscribed by the present shareholders.

With up-to-date plant the Company ought to earn large profits, and the shareholders will be unwise to allow a good 7 per cent. investment connected with their own property to fall into other hands. Considering the inefficient retorts, the weathered shale, the hindrances encountered in starting after a lapse of years, and the rate of wages, etc., a debit balance of £1,763 for the twelve months was less than might have been anticipated, and of this amount the directors are of opinion that £468, although charged to revenue, was capital outlay.

Since the advance in the price of coal, the Company has worked its own coalfields, and obtained supplies very considerably under market prices. This is highly important, but greatest in importance is the fact that there is abundance of shale, 8,000,000 tons being at present available. There is no industry likely to be more profitable now than mineral oil manufacturing, and under good guidance, the Hermand Company ought to share in the general prosperity.

The directors of this company, having decided to adopt Bryson, Fraser, & Jones' patent retort to replace the existing Young & Beilbyretorts, they have just placed the contracts for the first instalment of the work. Mr John Muir Thomson, for several years mining manager with the Clippens Oil Company, has just received a similar appointment with this company.

Steady progress is being madewith the modernising of these works, but it will be some time yet before any benefit is derived from the working of the patent retorts. The preference share certificates of the company are now ready.

The New Hermand oil works have been seriously affected by the stoppage of the Linlithgow Oil Company. Half the crude oil produced at the Hermand Works was taken by the Linlithgow Company, and the closing of that market for crude oil has compelled the Hermand Company not only to reduce their output but also to intimate a reduction of miners wages by 3d. Per ton as an alternative to closing the works althogether. The miners have got till Tuesday to accept of reject the proposal.

NEW HERMAND WORKS TO BE STOPPED.

Notices have been posted at the works of the New Hermand Oil Company stating that the works will be closed down on Saturday. The closing down of the works coming so soon after the stoppage of the Caledonian Mineral Oil Works at Tarbrax and Lanark and the Linlithgow Oil Works shows that the smaller oil companies of Scotland have fallen on difficult times. The New Hermand Company had been in liquidation for some time, and an effort was made to sell the works and mines as a going concern but a purchaser was not found. The company, since its reconstruction, has been greatly hampered for the want of modern retorts, and it is felt that these made all the difference between profit making and a weekly loss.

FOR SALE AS A GOING CONCERN

The BUSINESSS of CRUDE OIL and SULPHATE of AMMONIA MANUFACTURES, as carried on by The New Hermand Oil Company, Ltd., at their Breich Works, West Calder, together with The BUILDINGS on the GROUND, The Valuable MINERAL ESTATE of MID-BREICH and The FARM and MINERAL LEASES of EASTER and WESTER BREICH.

The Works are situated in the Parish of Livingstone, 1.5 miles from West Calder Station, and comprehend the following:

The Manager at Breich will show the Works and point out the boundaries to intending Offerers on receiving one day's notice, and information as to the Minerals may be obtained from the Company's Engineers, Messrs WILLIAMSON, Further particulars will be furnished by F.H. LOCKHART THOMSON. W.S., 114 George Street Edinburgh, Agent for the Liquidator, with whom Offers must be lodged no later than Saturday 14th February.

NEW HERMAND WORKS TO BE STOPPED.

Notices have been posted at the works of the New Hermand Oil Company stating that the works will be closed down on Saturday .

The closing down of the works, coming so soon after the stoppage of the Caledonian Mineral Oil Works at Tarbrax and Lanark and the Linlithgow Oil Works, shows that the smaller oil companies in Scotland have fallen on difficult times.

The New Hermand Company has been in liquidation for some time, and an effort was made to sell the works and mines as a going concern but a purchaser was not found. The company, since its reconstruction, has been greatly hampered for the want of modern retorts, and it is felt that the want of these made all the difference between profit-making and a weekly loss. Tarbrax works were hampered in a similar manner, showing that only those companies which are in a financial position enabling them to erect and maintain the modem retorts will be able to make a profit with the low prices still ruling for products.

Nearly 500 workmen were employed at Tarbrax works and 200 at New Hermand, and, as these have all been thrown out of work within a few days, much hardship is sure to be felt by the working classes in the district before other employment can be secured.

The works of the New Hermand Oil Company at Breich, and the mineral estate of Mid Breich, which have recently been exposed for sale as a going concern, have failed to find a purchaser and, in consequence, notices have been posted at the works that operations will cease on Saturday. About 120 men will be thrown idle. The shale field is said to be a good one, and the failure of the New Hermand is attributed to lack of modern plant. Hopes are entertained that one of the leading companies may step in and secure the works.

Our West Calder correspondent writes that the directors of Pumpherston Oil Company have purchased the New Hermand Oil Works and dwelling-houses. The New Hermand Works have been in liquidation for some time, and latterly had to suspend operations. It is expected that the company will put the works into a thorough state of repair, and the district is expected soon to be a busy centre of industry again. It is a remarkable fact that Pumpherston Oil Company have purchased and made prosperous several small oil works which previously were unprofitable. Seafield Oil Works, which previously belonged to Bathgate Oil Company, and Deans, to the West Lothian Oil Company, are instances of this.

Pumpherston Oil Company, who recently purchased the works and mines of the New Hermand Oil Company, having decided to take down the retorts at Breich and take them across to their Seafield works, where they will be erected alongside their present retorting plant. It is expected that a considerable saving will be effected thereby compared with having a separate crude oil works at Breich. The work of demolition has been started and it is expected to have the addition to Seafield works completed by December. The shale at Breich will be mined, and the workmen’s houses are already filling up.

A large staff of workmen are at present employed by Mr Topping dismantling the retorts at the new Hermand Oil Works, and while one of the workmen, named Michael Murray, residing at Stoneyburn, was blearing away the brickwork the pinch slipped and he fell headforemost on an iron bolt. Murray was taken home, but succumbed to his injuries.