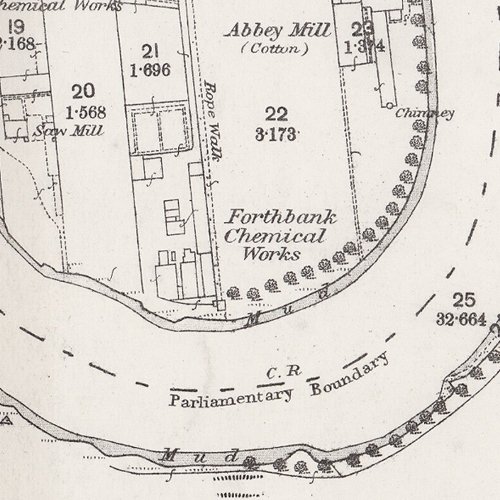 This seemingly modest oil refinery on the river front in Stirling once lay at the heart of Scotland's international oil trade. For a short period during the mid 1860's, shipping on the River Forth brought in crude petroleum from the USA, Canada and Burma for refining at Forth Bank works. Crude shale oil from Broxburn was also shipped by canal boat and river lighter. The company also owned Ballat Chemical Works in the countryside of Stirlingshire, constructed following complaints about the smell from the Stirling works.

A superb account of the works in 1866 was published in the Stirling Observer.

On failure of George Shand & Co in 1869, the premises appear to have been acquired by William Taylor & Co., an established firm of candlemakers based in Leith, who continued operation of the refinery until c.1877. Valuation roles list "Forth Bank Oil Company" as operators of the works between 1869 and 1871, however no other reference has been found to this company, which may have just been a trading name of William Taylor & Co.

Mapped by the Ordnance Survey of c.1865, showing the waterfront location of Forthbank Oil Works. 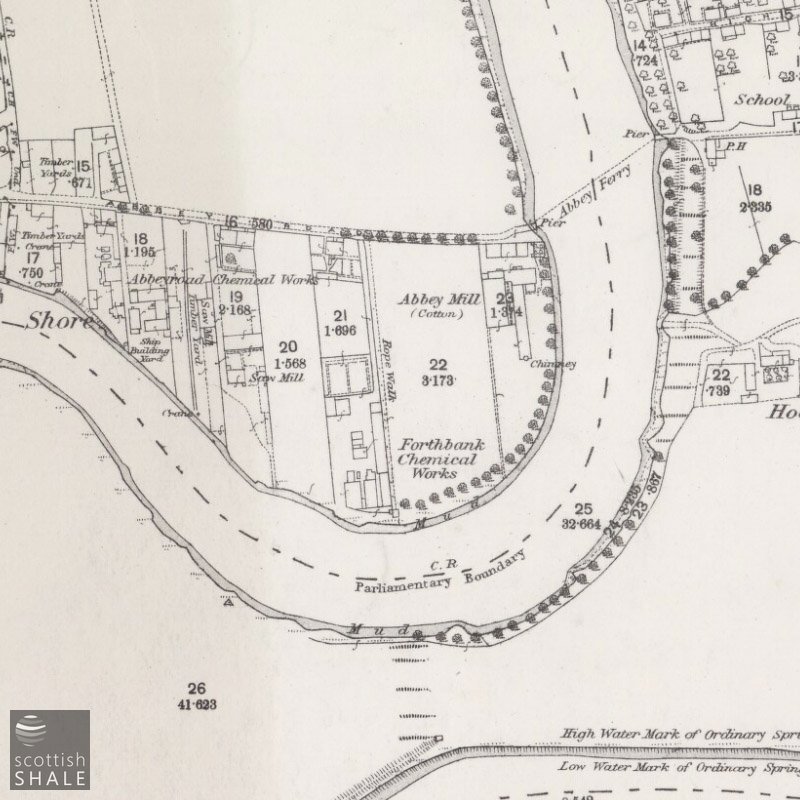 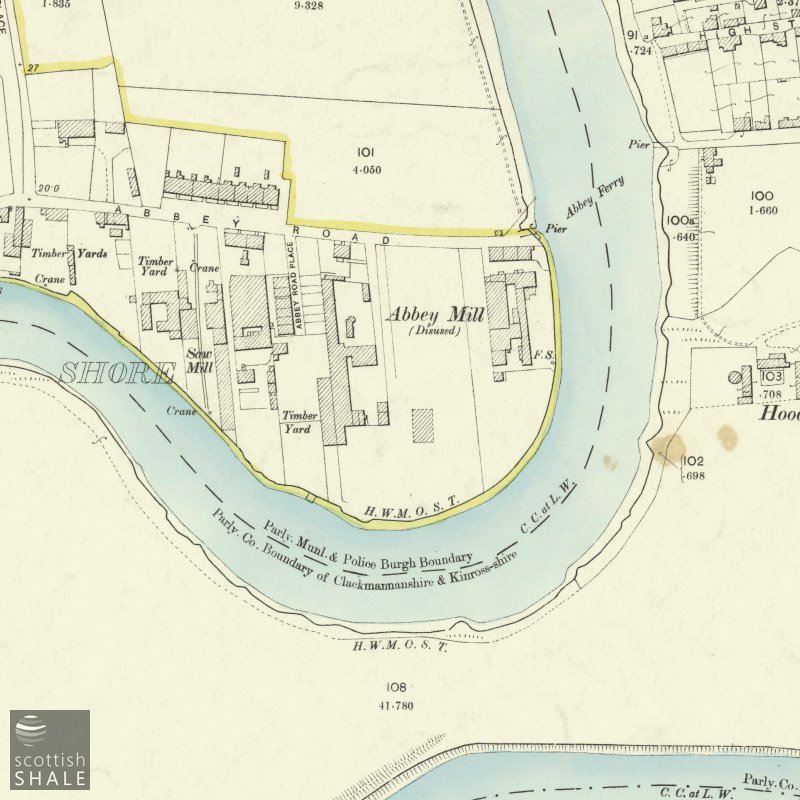 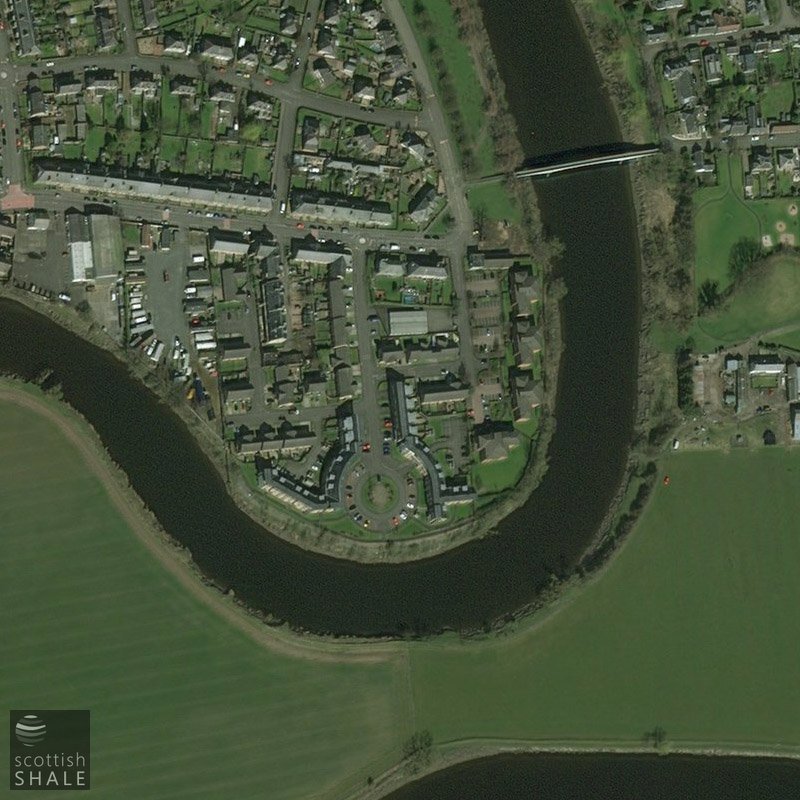 A VISIT TO FORTH BANK CHEMICAL WORKS

The Forth Bank Works are situated in the lower part or outskirts of the ancient royal burgh of Stirling, on one of the tongues of land formed by the many links or windings of the river Forth, see full record

There will be SOLD by Public Roup, within the Facility Hall, George's Place, Glasgow, upon Wednesday the 18th day of November next, at Two o'clock. ALL and WHOLE the MINERAL OIL REFINERY known as "FORTH BANK WORKS" at STIRLING. Consisting of Grounds held partly in Feu and partly in Lease, with the whole Plant thereon, including 24 Cast and Malleable Iron Stills, of capacities varying from 1000 up to 3000 gallons, with Super-Heating Apparatus and Connections: Boilers, Agitating Boxes, Cisterns; Steam-Engine. Hydraulic Presses, and other Apparatus. These Works, which are capable of Refining 1000 Barrels of Crude Oil Weekly, were formerly the Property of, and occupied by, George Shand & Company, Oil Manufacturers, and are most favourably situated on the banks of the River Forth, where vessels can load and unload, and likewise with reference to Railway Conveyance to all parts of the Kingdom. The Title-Deeds and an Inventory of the Plant, and Articles of Roup, will be exhibited to intending Purchasers upon application fo BURNS & ALISON, Writers, 50 West George Streer, GEORGE WINK, Accountant, 175 West George Street, or M'LAY & MONCRIEFF, Writers, 169 West George Street, Glasgow; and the Premises themselves will be shown on similar application.

STIRLING.-Fire at Mr Shand's Mineral Oil Work.- On Thursday night, about half-past nine o'clock, fire was discovered in the large wooden erection used as the panning house of Mr Shand's mineral oil work, situated on the south side of the railway at the Causewayhead Station. Everything near being of a very inflammable nature, the fire spread and gathered strength quickly, and in a very short time the wooden erection was burning fiercely, and about ten o'clock, or shortly after it, the roof fell in with a crash. The Stirling fire brigade were present shortly ,after ten, hut their services were not required, and were unavailing in the circumstances, except for cutting down the ruins of the wooden shed, and removing the remains out of the way of the workmen and others who were engaged confining the fire to narrower limits by surrounding it with sand. This they succeeded in doing, and after the contents in the pans had burned themselves out, the conflagration came to an end about two o'clock next morning. The property, we understand, is not insured, and the loss to Mr Shand will be very considerable.