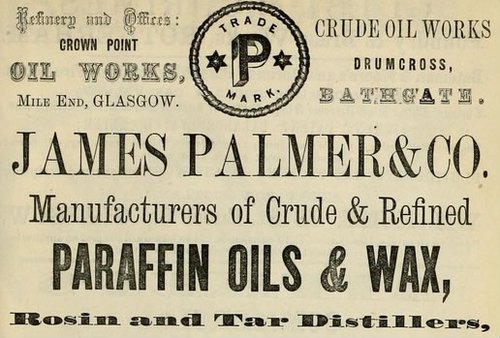 A small oil works with a short working life following the bankruptcy of their promoters. Not shown on any known map, their location can be surmised by the remains of a small spent shale bing, marked on mining plans, and still visible as a subtle green mound arising from the boggy ground. Coal and shale were worked close by at Drumcrosshall No. 1 & 2 mines.

Valuation rolls for 1866 and 1867 record a second Drumcross Paraffin Oil Works, operated by Palmer & Page (or James Palmer & Company) This smaller enterprise was financially linked to the Drumcross works of Lester, Wyllie & Company, and both were declared bankrupt in 1867. The bankruptcy proceedings of Lester, Wyllie & Company, and James Palmer & Company, reported in the press provide a good illustration of the speculation and ill conceived schemes that characterised the Scottish "oilmania". 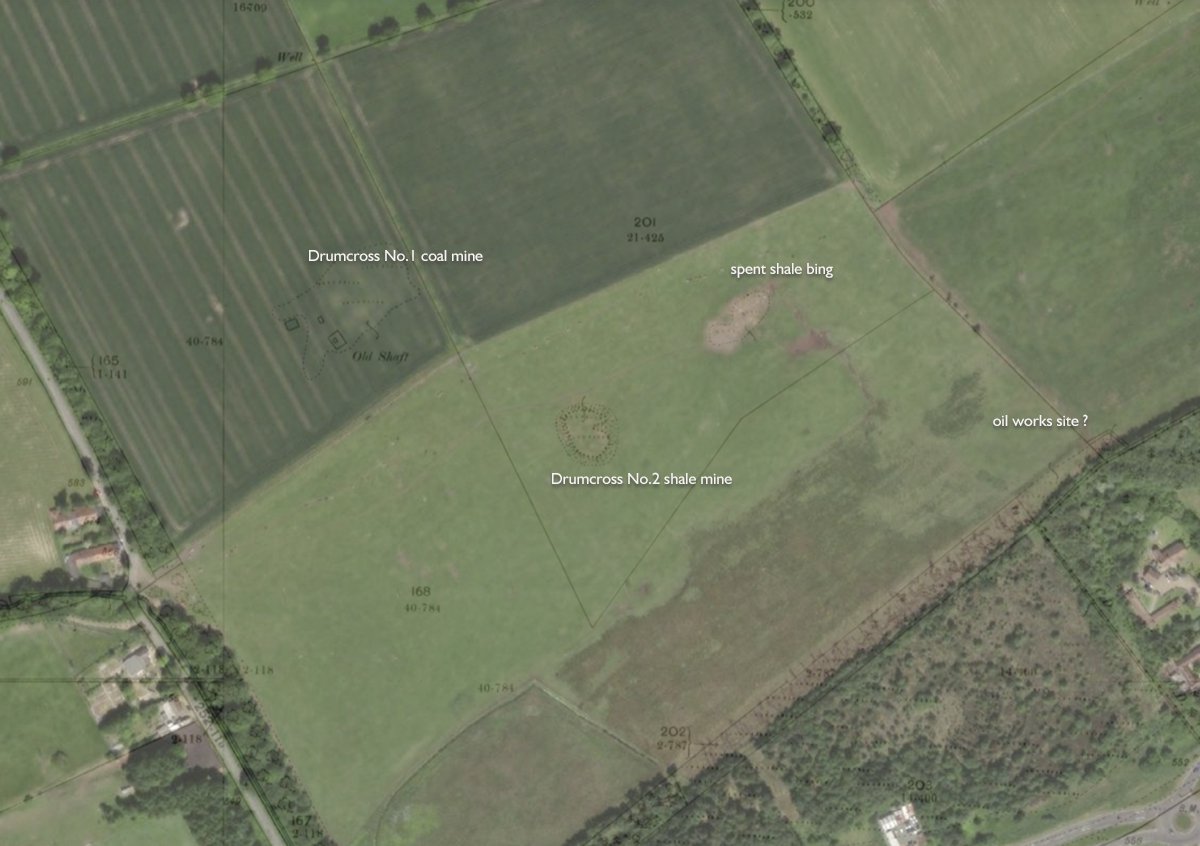 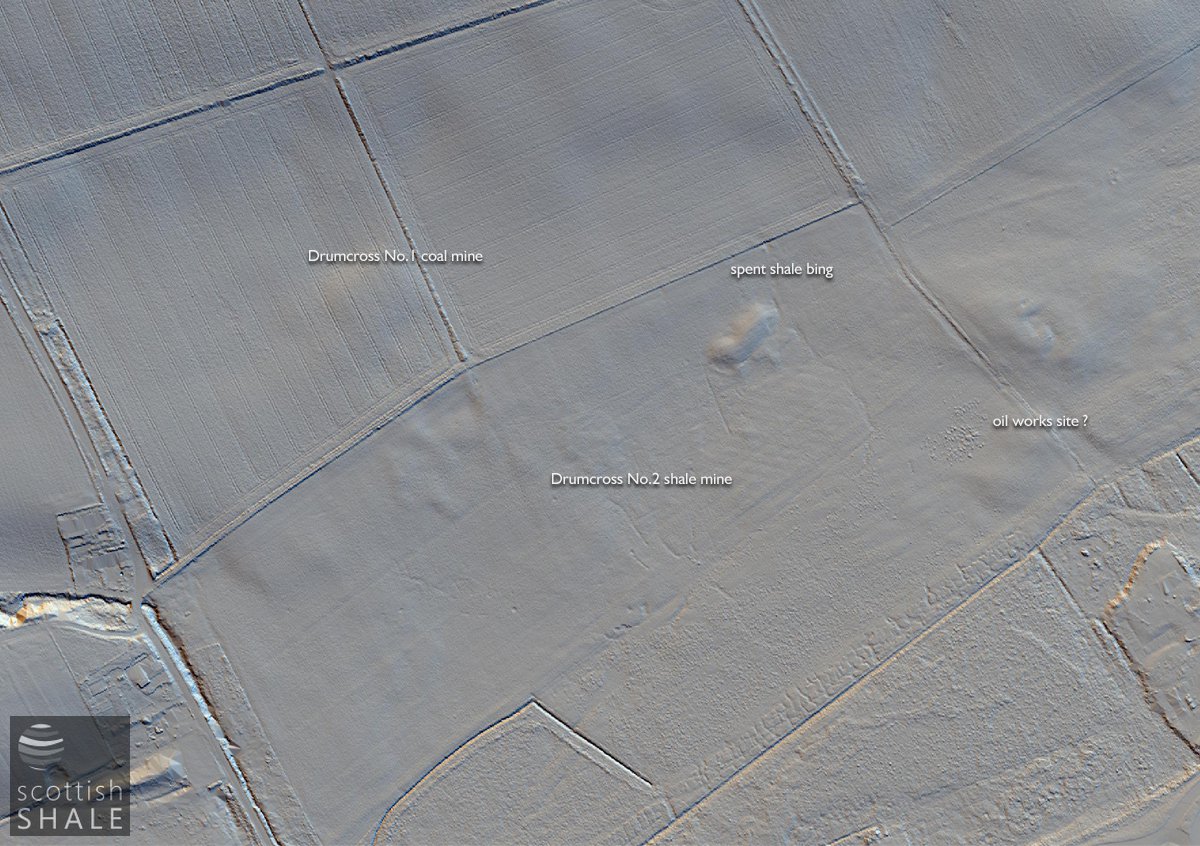 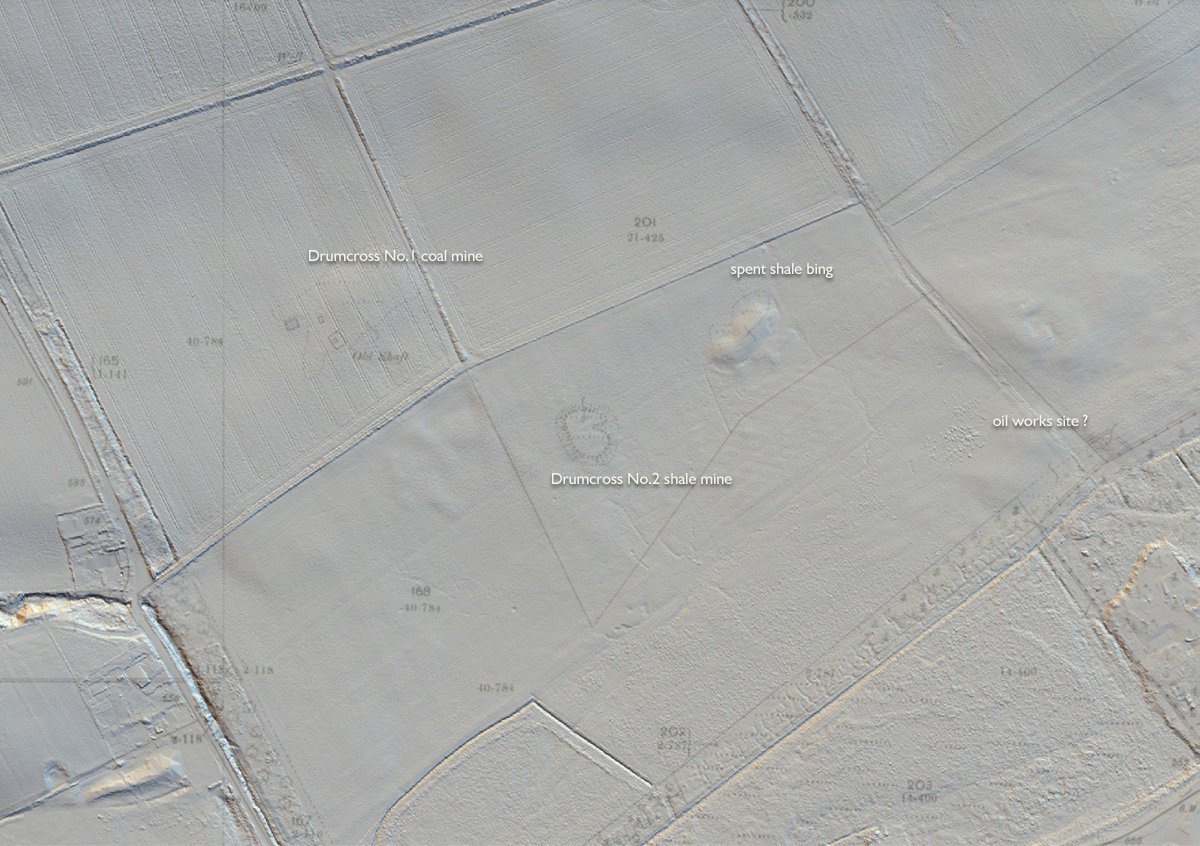 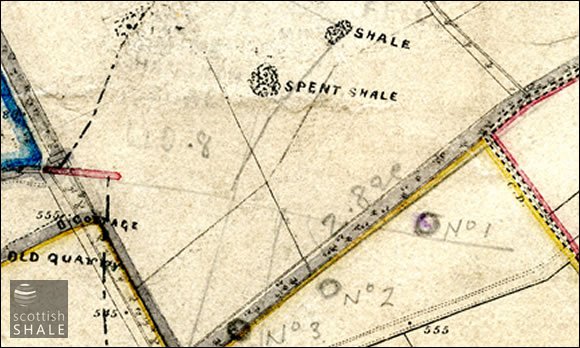 Mining and land ownership plan, with annotations showing the different bings (LVSAV1991.056). Evidence of the ground suggests that the annotations "shale" and "spent shale" might be the wrong way round. 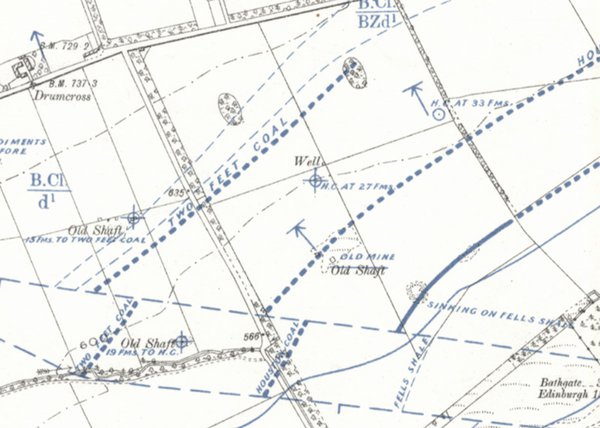 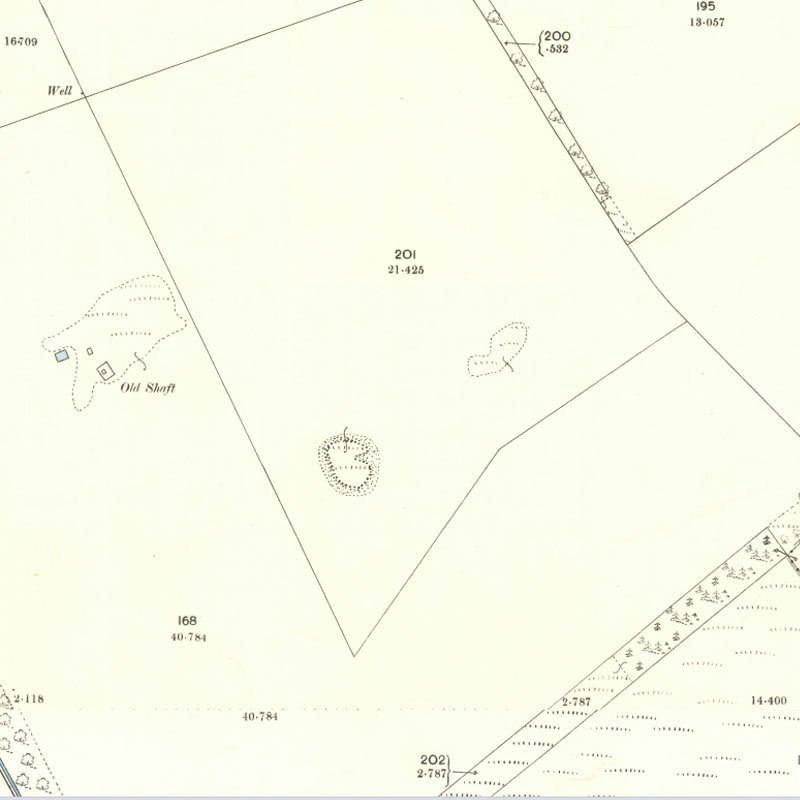 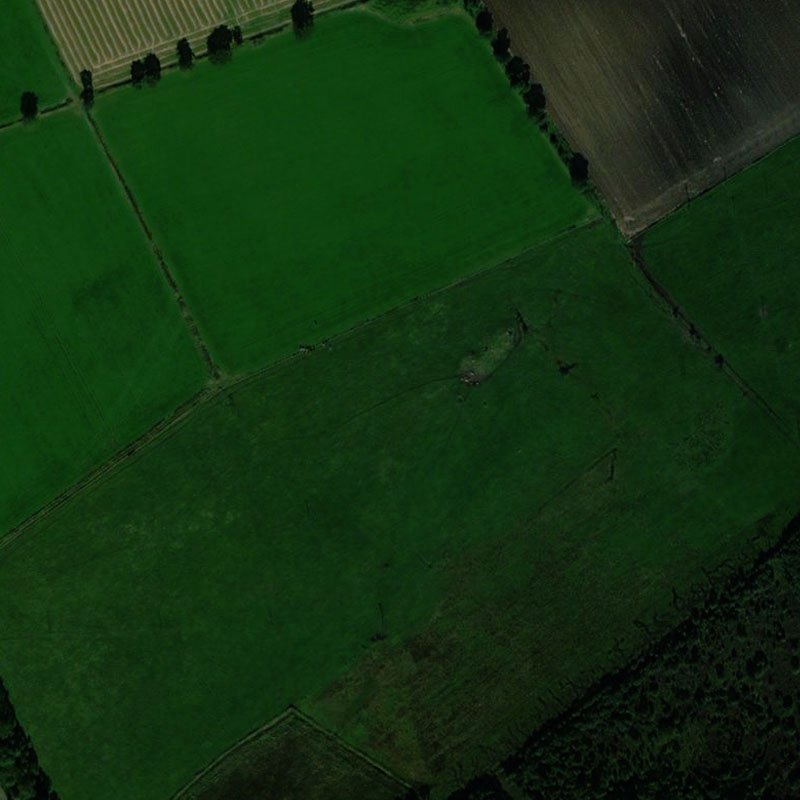 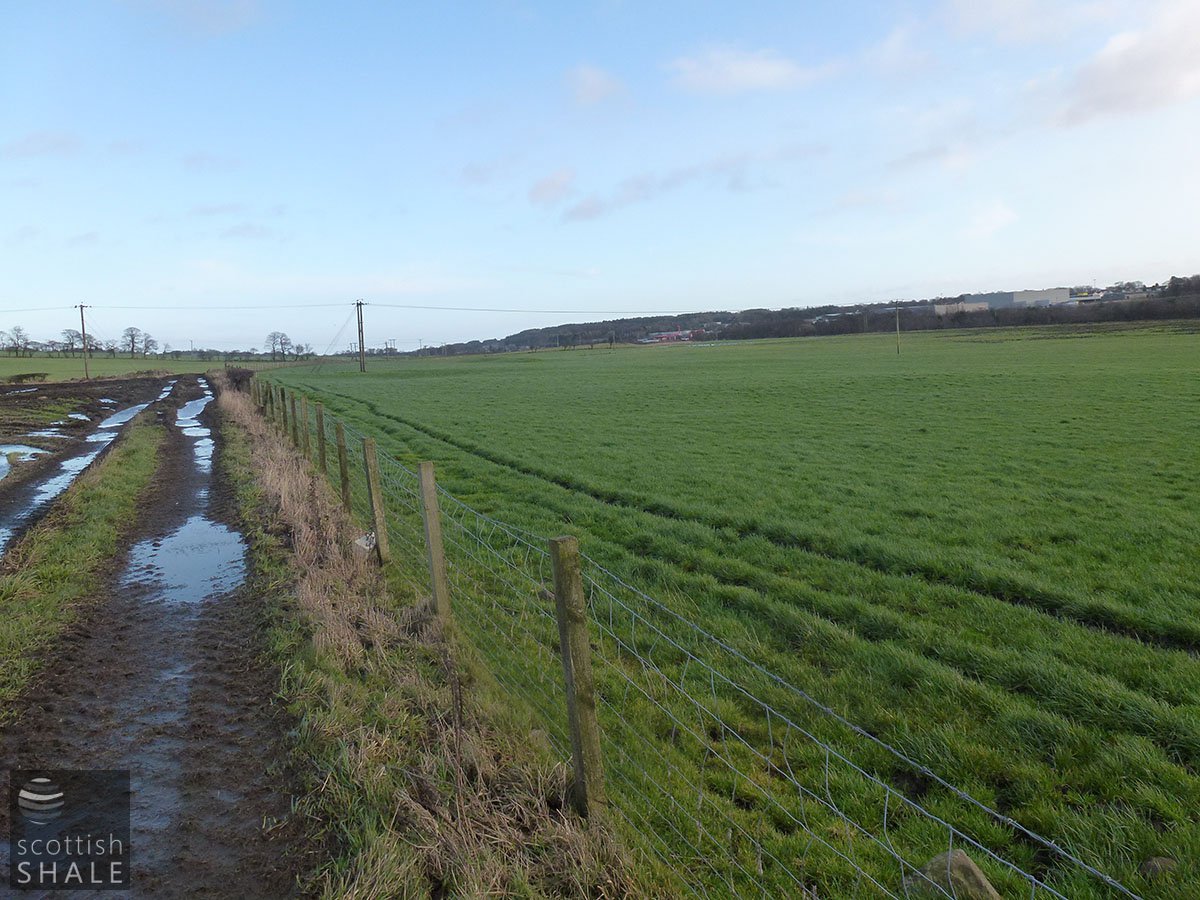 View towards possible site of oil works, most likely located beyond the post of the power line in the middle distance. Looking east. January 2012. 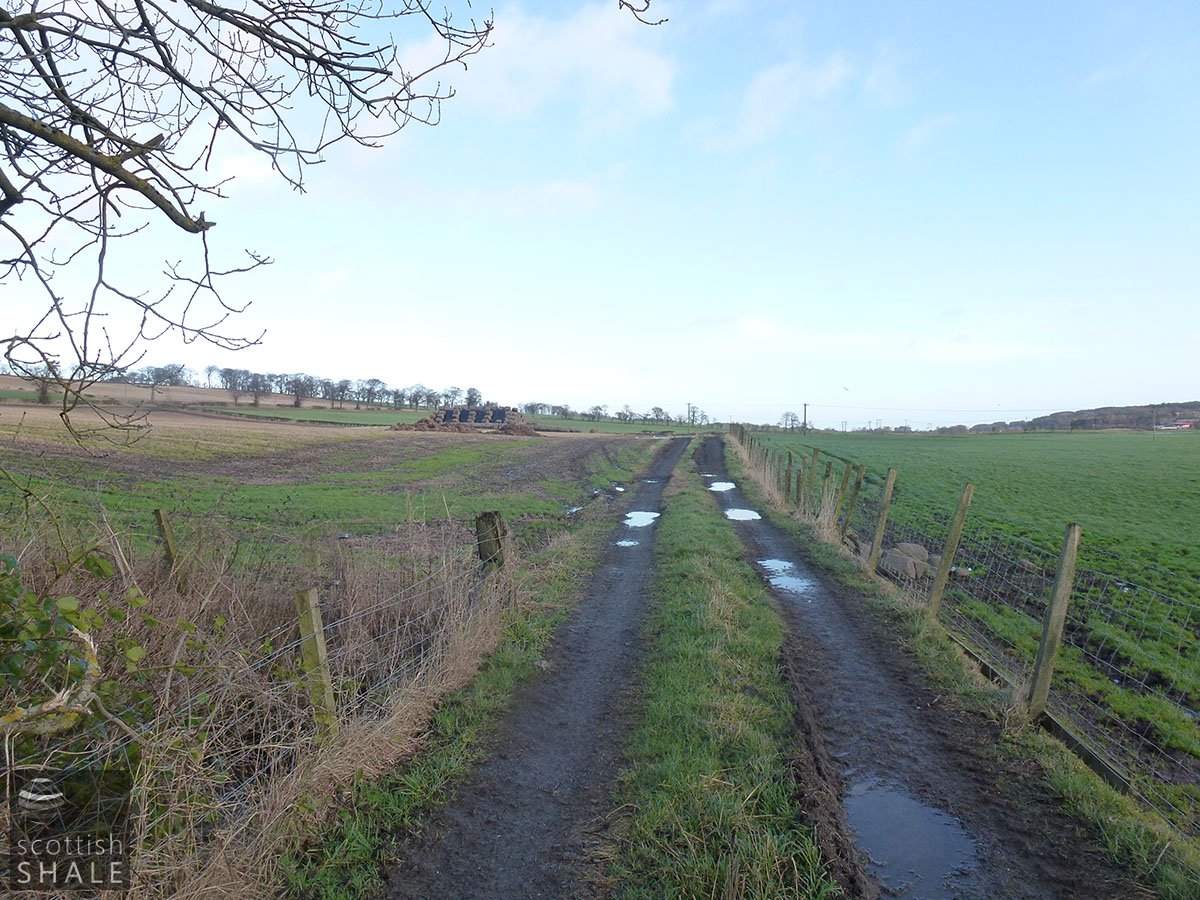 More distant view from the public road; the area used to stock bales might represent the site of Drumcross No. 1 Coal Mine. Looking east. January 2012. 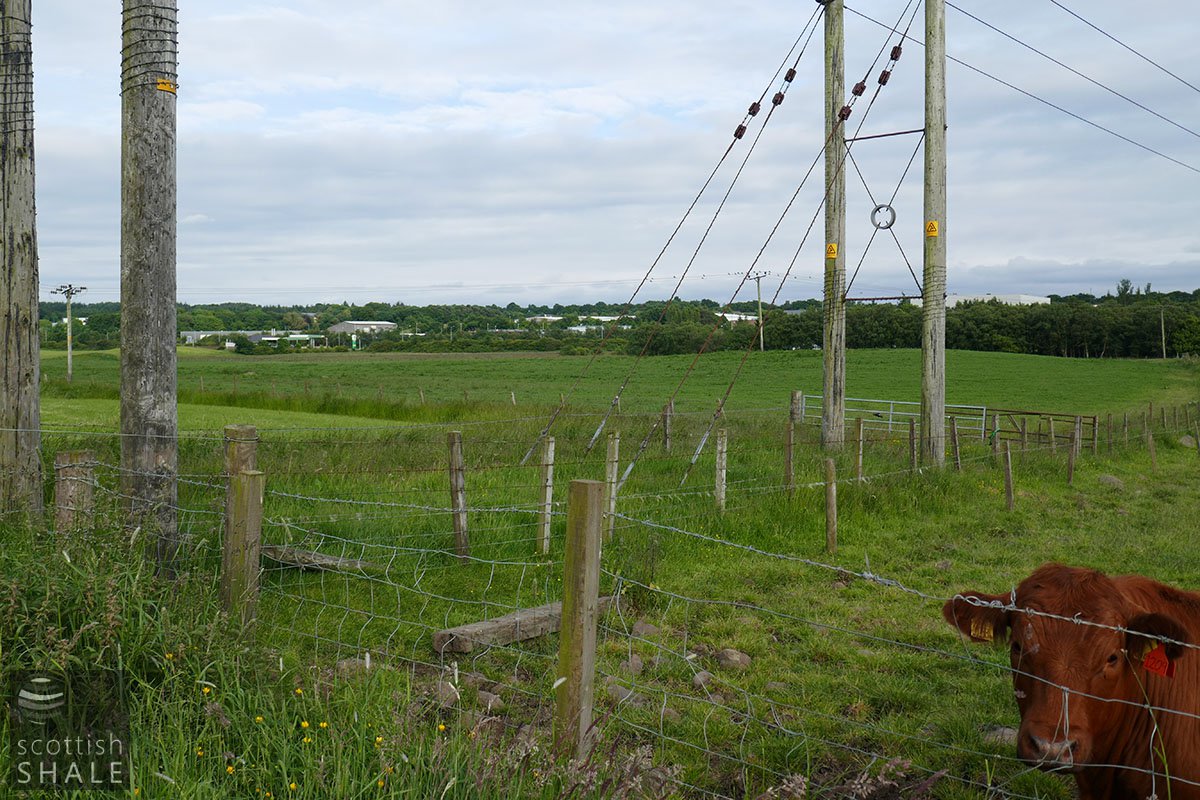 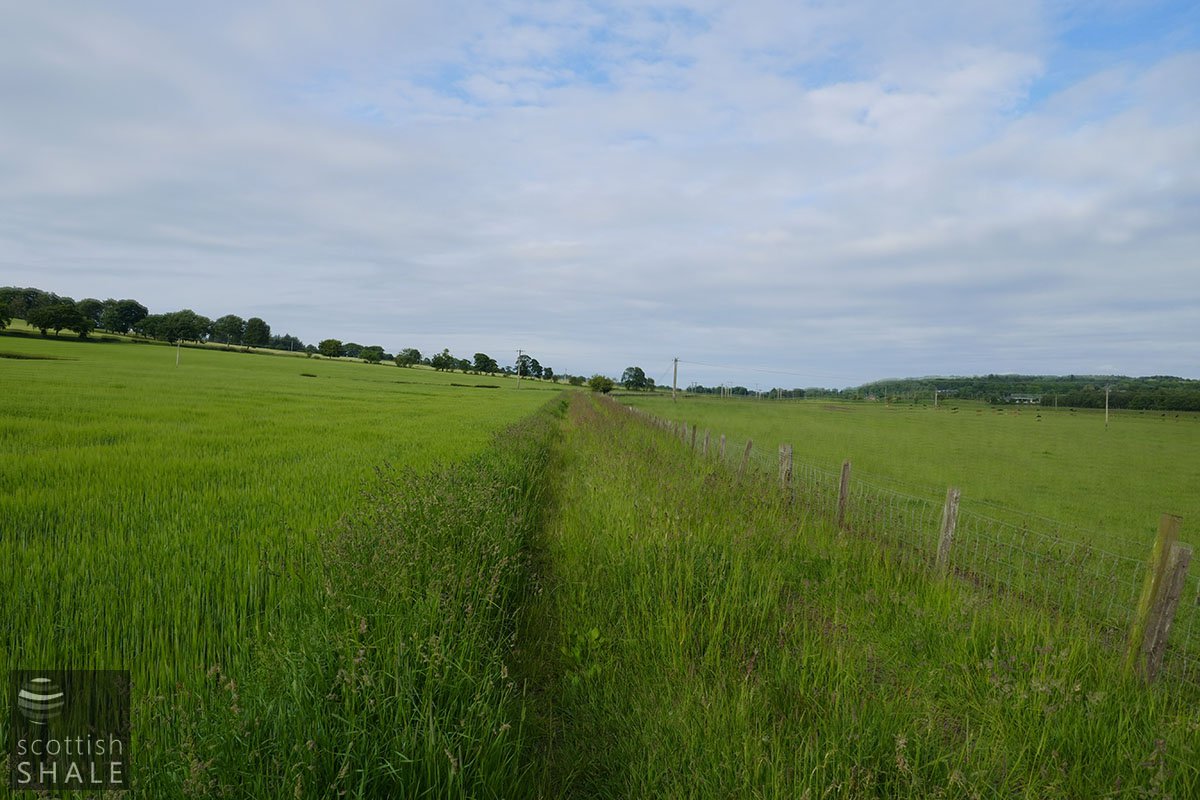 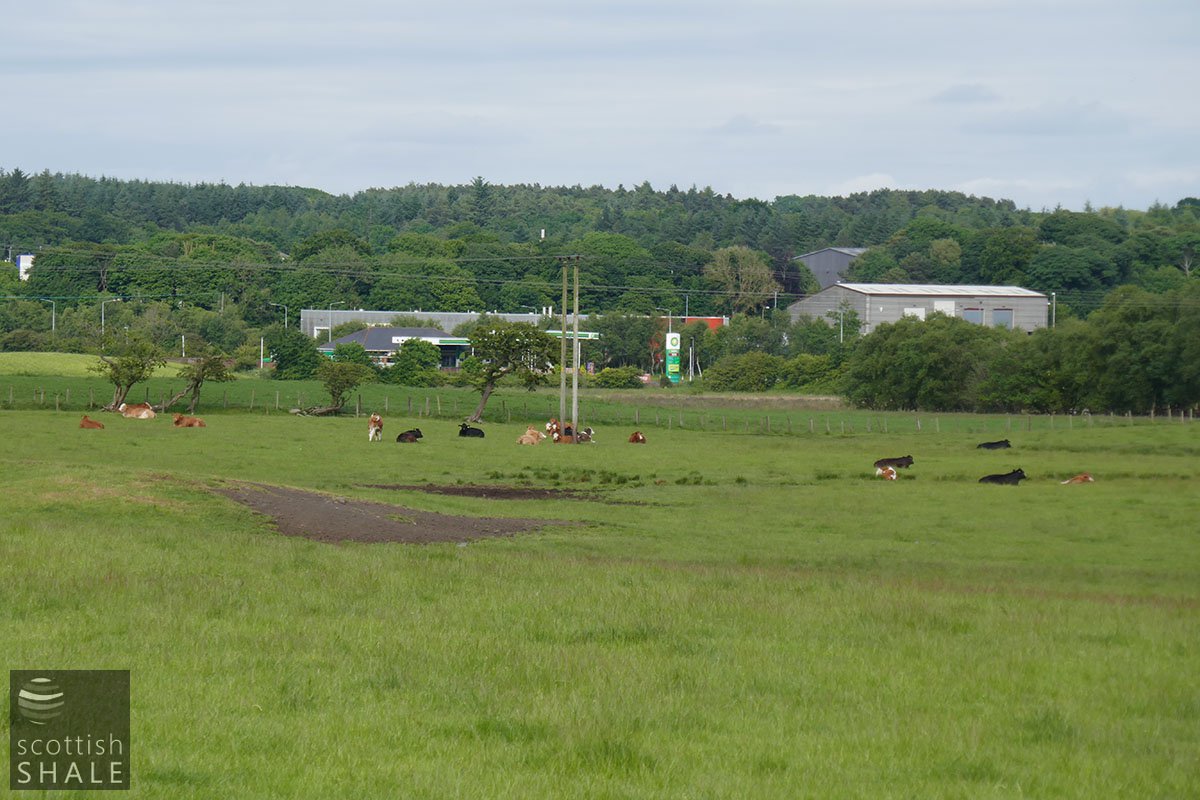 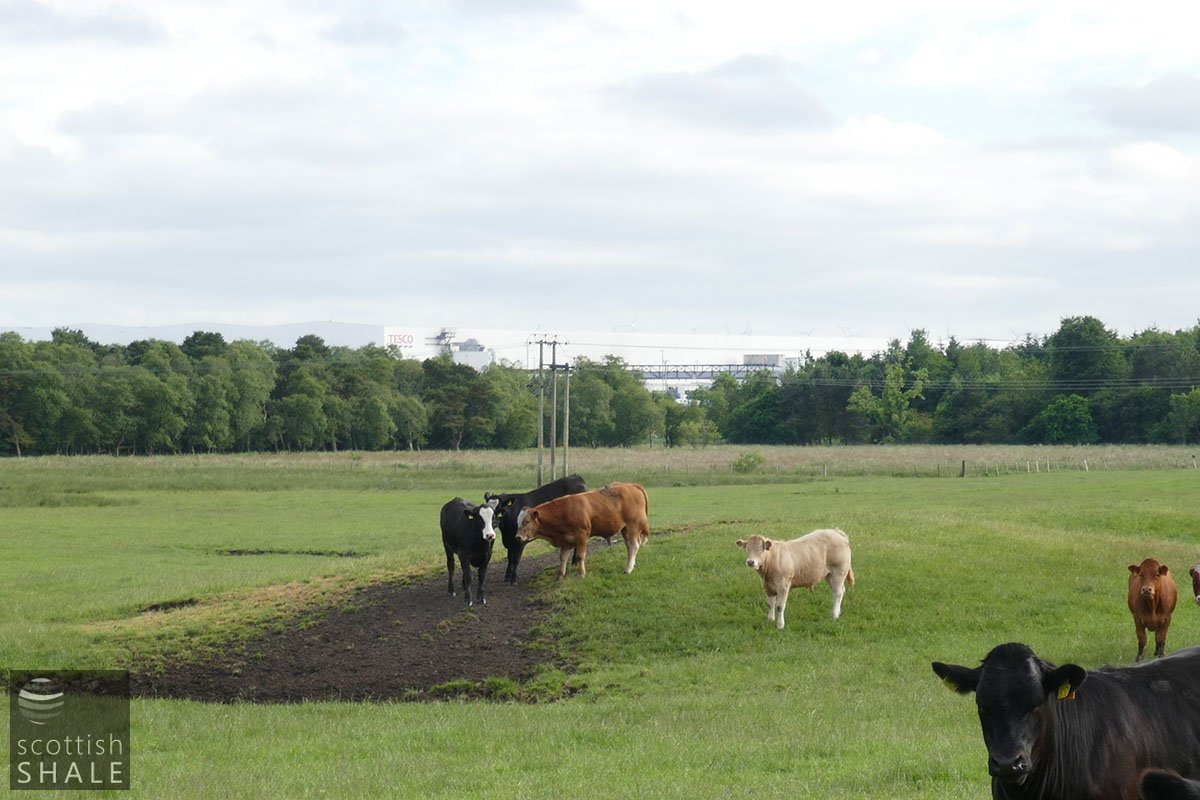 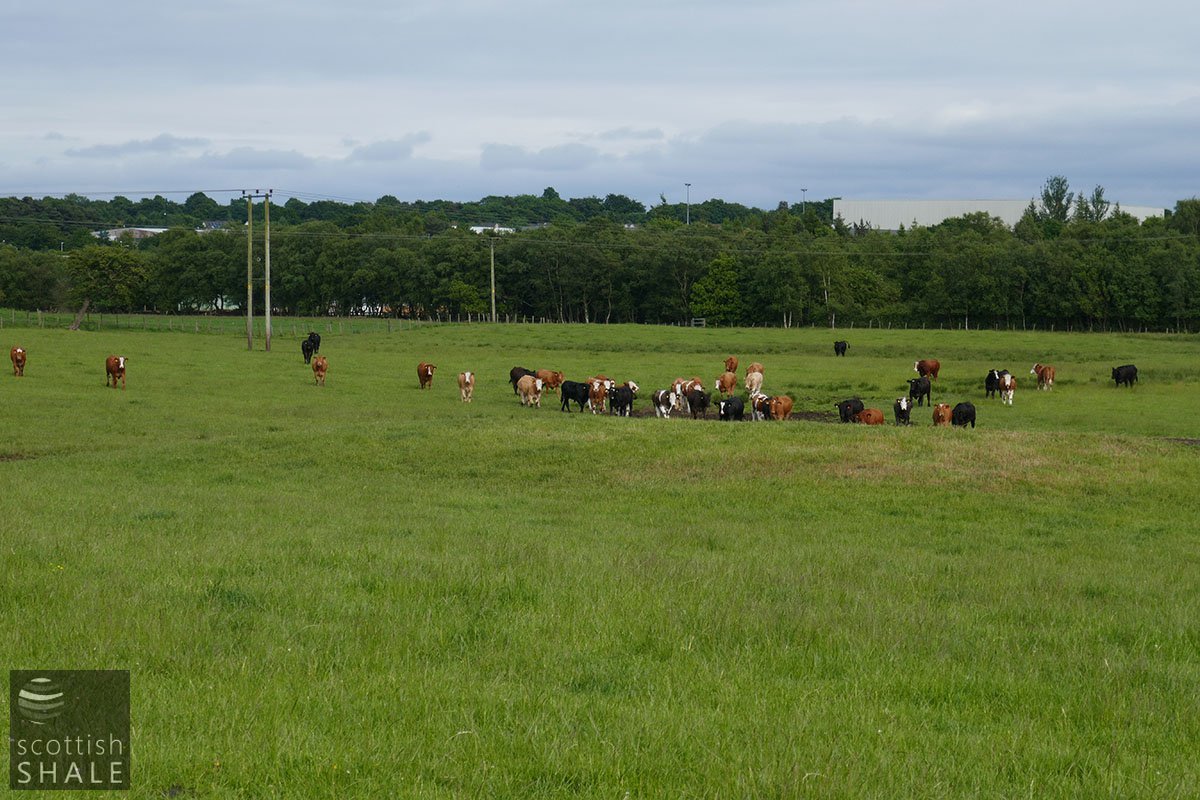 In consequence of the Dissolution of the DRUMCROSS COAL COMPANY and of the necessity of realising| the Capital of the Partners, there will exposed to Sale by Public Roup, upon Friday the , Two o'clock Afternoon, within the hall of the Faculty of procurators at Linlithgow at the Low Upset Price of £l600, THE WHOLE MACHINERY and WORKING PLANT of the said Company, and the Wrought MINERALS and Manufactured OILS and BRICKS at the Works on Drumcrosshall, as at the day of the Sale; together with the LEASES of the Valuable and Extensive MINERAL FIELDS on the Farms of Drnmcrosshall, Byre., and Drumcross. The Works are comparatively new and constructed on the most approved principals. The Mineral Fields contain abundant supplies of rich shales, and thin seams of excellent Parrot Coal, Smithy or Coking Coal, Household Coal, and Fireolay—all of which are presently wrought by Company. The Leases embrace an area of about 500 acres. The Lease of Drumcrosshall and Byres is for 21 years from Candlemas 1863 and the lease for Drumcross for 15 years from Martinmas 1863 . The Pit sand Work, will open to inspection on application to Mr. Henry Black, at Drumcrosshall. or to Mr. James Terris, Bathgate; and the conditions of shale will be seen in the hands of Messrs Hardy & Aitken, Writers, Linlithgow; or Messrs Glen & Henderson, Writers there. Linlithgow, 21st July 1865.

On Friday morning week, at the Clyde Oil Works, Drumcross, near Bathgate, a boy named about seventeen, son of Andrew Brodie, labourer, Bathgate, fell into tank capable of containing nearly one thousand gallons, into which the oil is collected after leaving the coolers, where it is condensed. An alarm was raised, and on assistance arriving, the lad found struggling in the oil choking. Emetics were applied copious draughts of hot water and salts, which caused him vomit nearly one pint of oil. The boy is much swollen the face, and confined to bed.

To be Exposed for SALE by Public Roup, within the Facility Hall, St. George's Place, Glasgow on Wednesday the 26th day of February next, at Two o'clock afternoon at the pleasure of the Offerers, subject to a reserved bid in favour of the Exposer, The TENANT'S RIGHT to a LEASE, for Sixteen Years, from Candlemas next, of the whole PARROT or GAS, HOUSEHOLD, COKING, and SMITHY COAL, and the whole BLACKBAND and CLAYBAND IRONSTONE, LIMESTONE, FIRECLAY and BITUMINOUS SHALE in and under the FARMS and LANDS of DRUMCROSSHALL and BYRES, in the Parish of Bathgate, and County of Linlithgow, extending 451 Acres or thereby: together with the OILWORK, BRICKWORK, and PLANT, including RETORTS and CONDENSORS on the Ground, all belonging to the Sequestrated Estate of Lester, Wyllie & Co. The Minerals are generally of Excellent Quality and easily wrought, the Coal commanding a high price in the Edinburgh Market; while the Shale and Gas-Coal wrought along with it can be advantageously sold, or the Oil can be manufactured therefrom on the Lands at a cheap rate. Altogether, the Lease is in favorable terms for the Tenant, and the Mineral Field and Works are well adapted for carrying on a Large Business in the Coal and Oil Trade. The Plant, which is in good condition, comprises all the requisites for a Going Work. The Stock of Wrought Minerals may be had at the Valuation. For further particulars apply to McCLELLAND, SON, & Co., Accountants, 140 St Vincent Street, Glasgow; JOHN RANKIN, Solicitor, Airdrie; GLEN & HENDERSON, Writers, Linlithgow; or BURNS & ALISON, Writers, 50 West George Street, Glasgow, in whose hands are the Articles of Roup, Inventory of Plant &c., and adjusted Lease. Glasgow 30th January 1868.

PURCHASE OF THE ENGINEER WORKS AND DRUMCROSS Oil Works. —We understand that the engineering works, situated near the Monklands Railway Station, at the foot of the old town of Bathgate, and on the site of the old mill, has found a purchaser in the person Mr Fraser, Glasgow, for the sum of £2000.

MAN FOUND FROZEN ON THE ROAD.

On Tuesday morning, as two men were proceeding home to Dechmont from Boghall Oil Works, and when near Drumcross Oil Works, about seven o'clock, they discovered a young man lying on the road side, quite helpless from exposure. They carried him to Drumcross, and when the poor's inspector, Mr Robertson, from Bathgate, was informed, he proceeded there along with Dr Doig, who found the man in a very precarious condition, and had him conveyed to the poor-house, where he lay insensible till late at night. He was identified as being a shoemaker named Masterton, belonging to here, who had been at Uphall the day previous along with a companion, who had left him. Up till now he remains in a very dangerous condition.