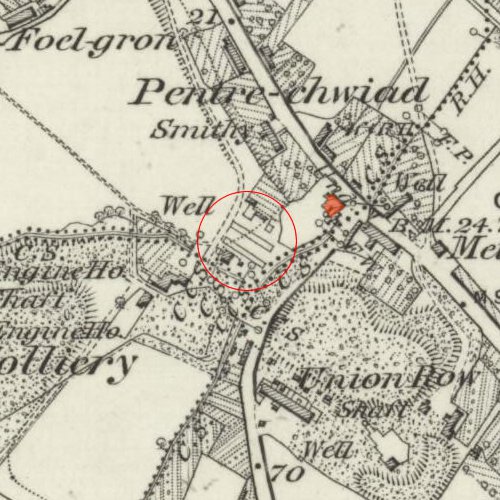 A narrow seam of a good quality cannel coal was worked along with the main coal at a number of collieries in the Bagillt area. The proprietors of Wern colliery in Bagillt advertised supplies of their "very superior" cannel to oil and gas producers during 1864.

It seems that an oil works, equipped with 30 or 32 retorts and some basic refining equipment, were constructed near Wern colliery during late 1865. The collapse is oil prices during 1866 appears to have led to the failure of the business, and all plant and equipment were sold off early in 1868. The short life of the works was distinguished by an accident in which the local pub narrowly escaped being engulfed in burning tar, and a resulting court case (Davies v. Bagillt Oil Co.) which reveals further details of this rather ramshackle operation.

The suggested site of the oil works is derived accounts of the court case which describe hot oil and tar running downhill from the works to cause damage to the the Blossoms Inn. From this description it seems highly probable that the long structures on higher ground to the south west of the Blossoms Inn, marked on the 1869 OS map represents the oil works, which were probably disused by that time. This is compatible with the statement in the sale notice that the works were "adjacent to a colliery".

Mapped by the Ordnance Survey of c.1869, annotated to show the supposed site of Bagillt Oil Works; with the Blossoms Inn marked in red.

Above right: 6" OS map c.1869, annotated to show the supposed site of Bagillt Oil Works; with the Blossoms Inn marked in red. 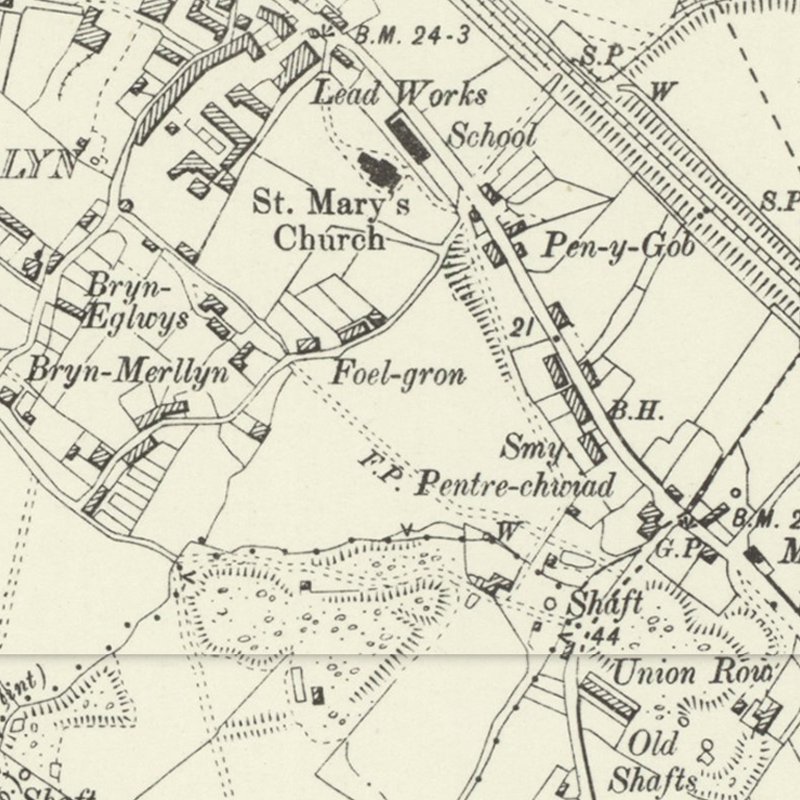 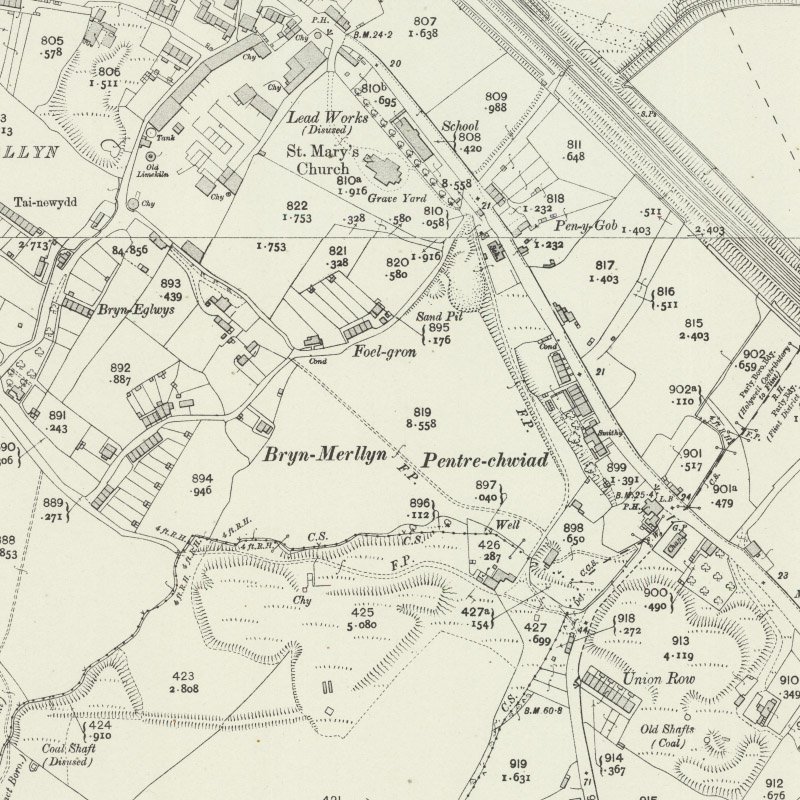 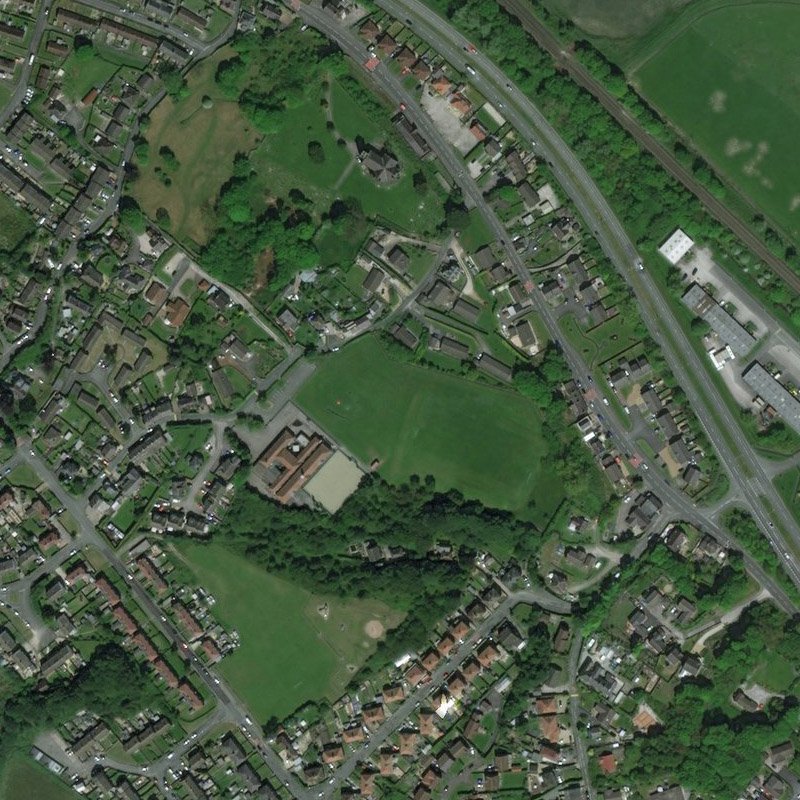 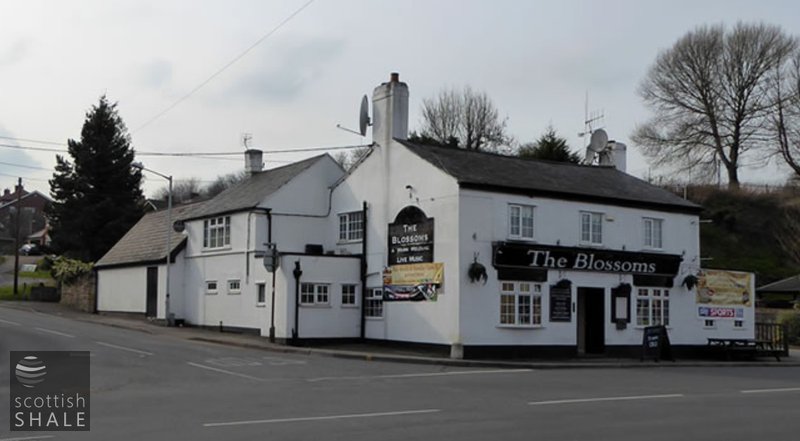 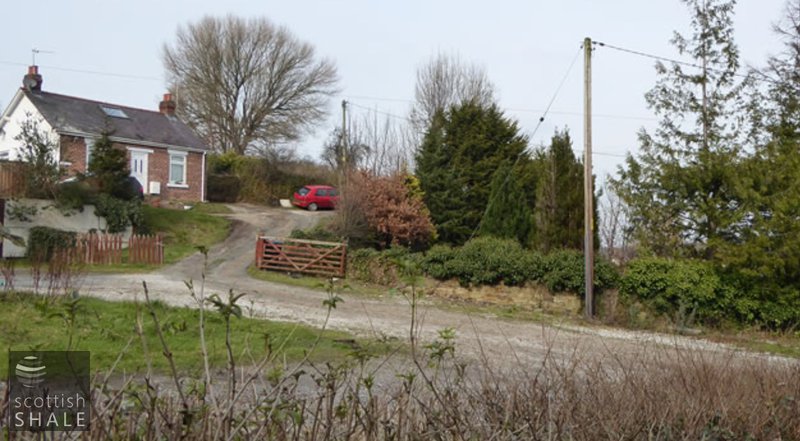 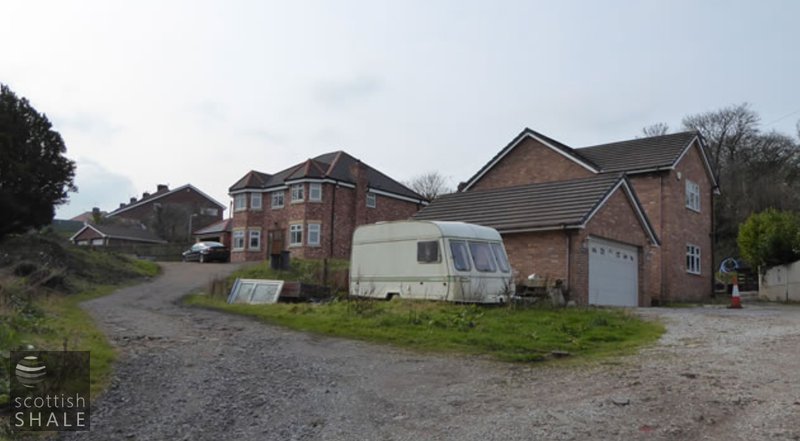 TO THE PROPRIETORS OF MINERAL OIL WORKS, GAS WORKS, & OTHERS.
On SALE, at Wern Colliery, in close proximity to the Bagillt Station, on the Chester and Holyhead Railway, a regular supply of 150 TONS per week of CANNEL COAL, of very superior kind. - Communications to be addressed to Mr. David Jones, Bagillt, near Holywell, Flintshire.

TO BRICKLAYERS AND CONTRACTORS.
Tenders are required for the BUILDING of THIRTY RETORTS at Bagillt —Apply to Mr. Hunter, Flint.

"A Small Sample."—This was an action brought by the Bagillt Oil Company against Samuel Wilson, of Tipton, Staffordshire, to recover £3 5s. 9d., the price of 14 cwt. of grease, which had been sent by Mr Hunter, the manager of the above company, to defendant as a small sample, having ordered it.—His Honour thought this certainly was not a very small sample, and gave judgement for defendant.

To Paraffine Oil Makers, Colliery Owners, Oil and Grease Manufacturers, and others.
Sale of the Lease, Working Plant, Stock of Oils, Grease, empty Casks, Tools, &c., at the BAGILLT OIL WORKS, FLINTSHIRE. MR. PICKERING has been instructed by the Bagillt Oil Co. to offer for SALE BY PUBLIC AUCTION, on the premises, on Thursday, the 30th day of January, 1868, the hereinafter mentioned valuable effects, comprising the Lease, two cottages, counting-house, thirty-two cast-iron retorts, with brick work, chimney stacks, and complete fittings, ready for immediate use; two wrought-iron stills, condensing tank, two oil receivers, one grease ditto, three waggon boilers, one steam ditto, two weighing machines, capable of weighing 20 cwt. each, all of which will be offered in one lot.

Descriptive catalogues are in course of preparation, and may be had 14 days prior to the Sale, at the Auctioneer's Office, the Eastgate, Chester, or from the Bagillt Oil Co, 17, Sweeting-street, Liverpool; or on the premises. The Plant is good working order, capable of consuming 100 tons of cannel weekly, and adjoining a Colliery where a plentiful supply can always be had.