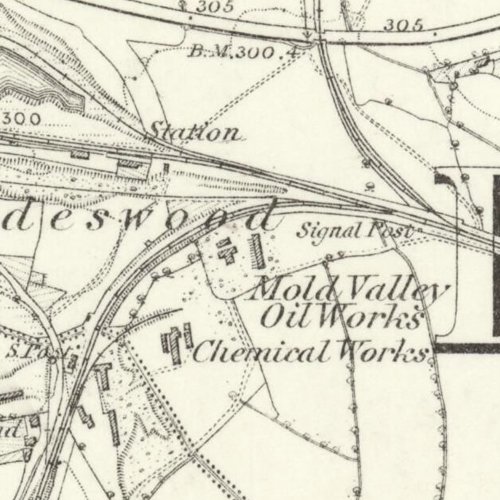 A crude oil works notable for the adoption of unusual double-ended retorts built to Strange's patent; presumably the design of Thomas Strange, the works manager. Newspaper accounts of the court case Humphreys v . Milthrope suggest that these retorts were supplemented or replaced by twelve further retorts in 1870-71 when the works were owned by G. F. Milthorpe.

Mapped by the Ordnance Survey of c.1869, showing the works in operation. 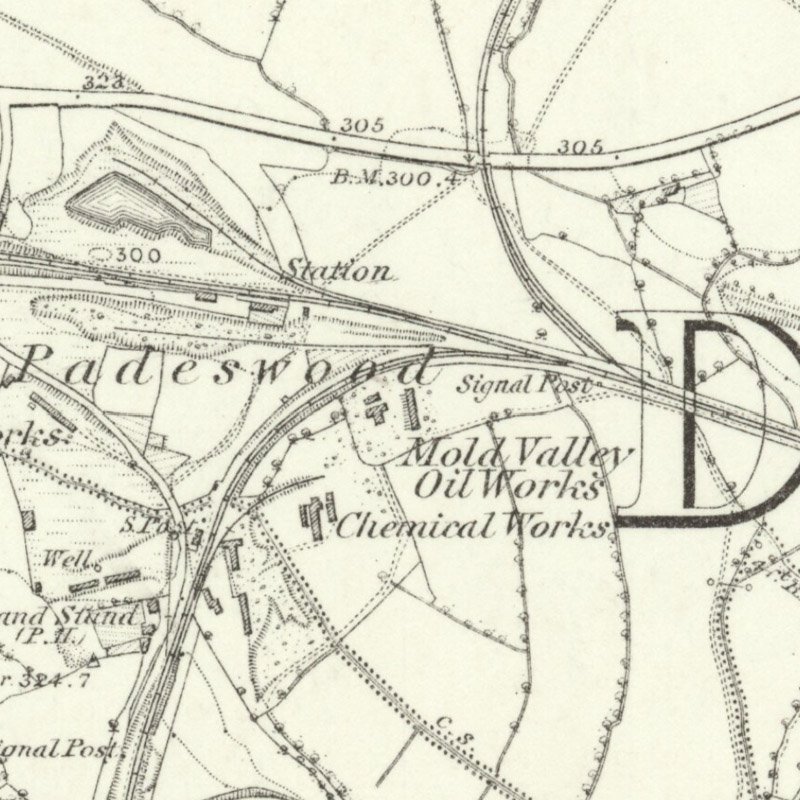 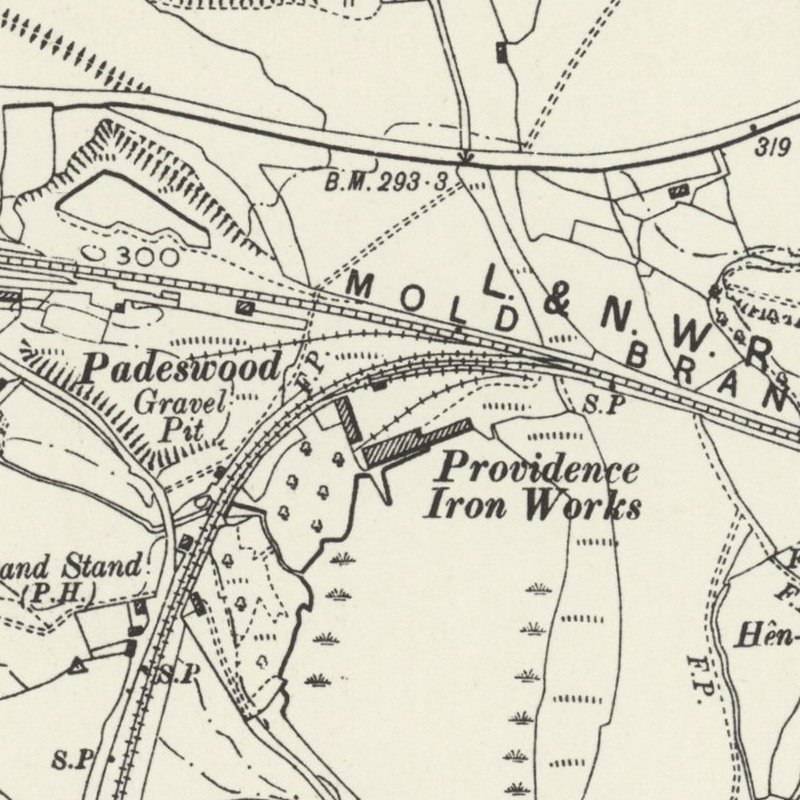 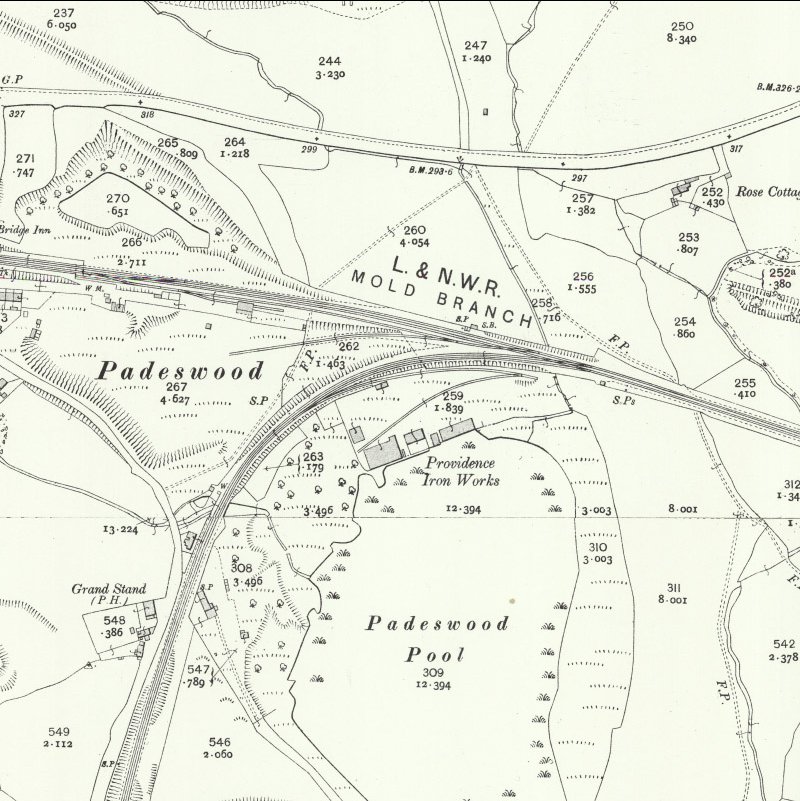 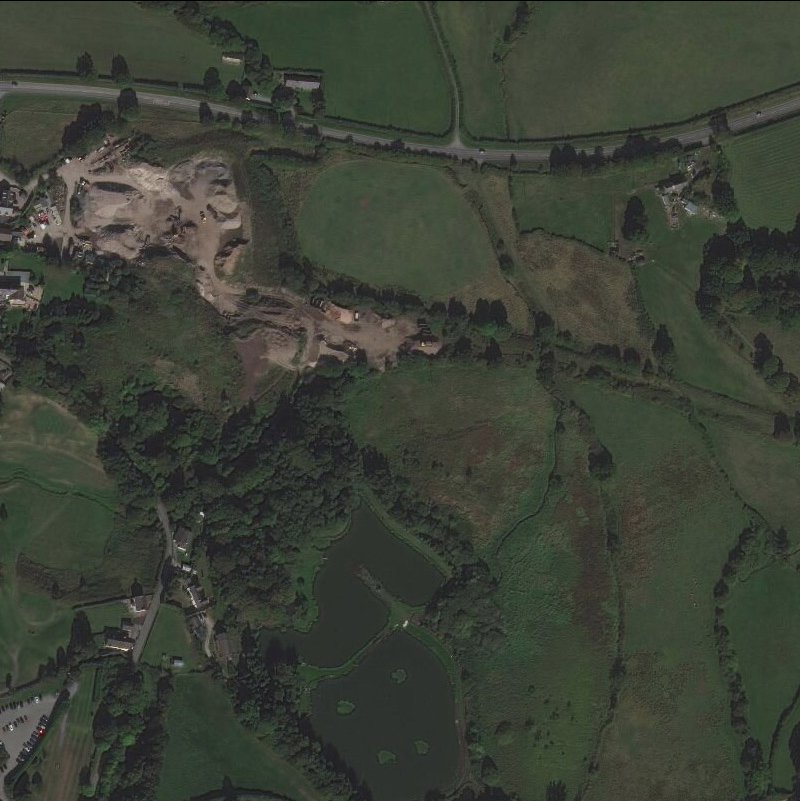 The Mold Company, which lies just off the station (at Padeswood) is one which is likely to achieve some distinction in petroleum manufacture. It starts with the latest and best improvements in retorts — the flattened ellipse, or half egg shape — holding a large quantity (15 cwt.), but not in too large a mass — more widely spread, and so more evenly exposed to the surface action of the fire. These are known as " Strange's Registered Improved Retorts," of which there are twelve, with twenty-four furnaces and only one chimney — a curiosity hereabout, where in many places we find two chimneys to each retort, causing a singular agglomeration — a crowd of brick columns all over the neighbourhood. These twelve retorts, it is asserted, can " work" more coals than any similar number In any other works, each "charge" swallowing in from 11 cwt. to lo cwt. The vapours issue from the top of the retort and come down through a swan neck pipe, with two valves, to the condenser, a long vat of sheet iron, the top of which is kept at an adequate coolness for condensation, by a stream of water running over it. Each of these pipes has a double valve — the action of which prevents the water from passing from the condenser to the retort in charging, as well as relieves the condenser from any over-pressure of steam. Twelve of these retorts require two men, who are called firemen, to charge them once in twenty-four hours, the time occupied in distilling the coal. These men work at day or night, being relieved alternately. Besides these, one man is employed to " back up" the fires and break the coal, which must not be put in too large, say, not much larger than a man's fist. See ! They open the door by " unluting" it, and un-screwing the cross bar that drives it close up to the furnace mouth. The fire is raging within, but we can soon perceive that the coal is all dry bones — coke in fact, with a reddish appearance and a metallic tinkle. This would be good coke for engine purposes, and would add some value to the saleable products, were it not that we want it here to burn the next charge — and so produce more oil and make more coke, and go on ad infinitum, producing, and re-producing. By infinitum, of course, I mean that unfathomable period known only to philosophers, who calculate that in 600,000 years we are all to sit shivering under a hedge-row, while the New Zealander steams away with our last scuttle of coals. The coke is drawn out and the men throw in the charge — another 15 cwt. — with shovels, taking care to spread it well. The coke is then placed in the furnace under the retort, and the work begins again. At the back of the furnace we see the green thick fluid running down from the condenser to the tank.

Impetuous Jack. — Humphreys v. Milthorpe. — The claim in this case was for £7 0s. 6d., and the plaintiff is a bricklayer at Buckley, and had been working for defendant at their oil works in Buckley last year. — Mr Taylor, of Chester, now asked that the case should be adjourned to next court, as Mr Roper, who had been instructed for the plaintiff, was at the funeral of his father. — Mr Allen, who appeared for defendant, agreed, provided the costs were allowed — that of the manager, Mr Goodison, and two witnesses. — Mr Goodison asked for his railway fare, and was told to be quiet by the judge. — Mr Taylor : Are you not known by the name of Impetuous Jack ? — Mr Goodison : That is a very impertinent question.— His Honour: Don't you be impertinent, sir. If the managers of these works were better able to manage themselves, we should not have so many riots in Mold. — Mr Goodison : I am not in Mold, your Honour. — His Honor : No, nor in your senses either. (Laughter,) — The case was adjourned, the plaintiff to pay the costs.

TO BUILDERS AND OTHERS - To be SOLD, by PRIVATE TREATY, from 2 to 300,000 Common and Fire BRICKS; also about 130 yards of Double Bridge RAILS, POINTS, and CROSSINGS. - Apply to Messrs G & F. MILTHORPE, Mold Valley Oil Works, Padeswood, Mold.