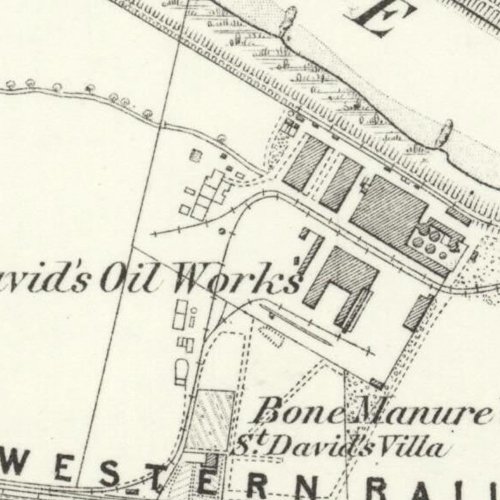 The great Saltney Oil Works - sometimes referred to as "St David's Oil Works" or the "Flintshire Oil Works" was the largest and most significant works associated with the North Wales oil trade. The site, beside the River Dee, was an established centre for the refining of imported American and Canadian crude oils by 1862, and was at that time a source of great nuisance to neighbouring homes and industry. It was stated that (in 1866), ships of up to 400 tons could be off loaded on the river bank.

By 1861, Saltney was centre of operations for Ebeneezer Waugh Fernie, partner in the Mineral Oil Company. Evidence in the trial of Young v. Fernie describes retorts in action at Saltney as early as February 1861, and further retorts being constructed there in September 1861 by Scott & Co. of Inverkeithing; a firm which had previously constructed retorts for Young's Bathgate works. Following defeat in the case brought by Young 1864, the partners of the Mineral Oil Company established the Flintshire Oil and Cannel Co Ltd. who took over ownership of the Saltney works along with the Leeswood Vale crude oil works and collieries at Tryddyn.

Further evidence of operations at Saltney was given to the House of Lords enquiry in 1866. The new company invested a further £60,000 at Saltney; the retorts there processed curly cannel from the Leeswood pits, while crude oil produced at Leeswood Vale from plain shale was transported to Saltney by rail tanker for refining. At that time the works were equipped with115 retorts and 45 stills. The works were lit with gas produced as a by-product of the retorting process, however the company were thwarted in bold plan to sell excess gas to light the streets of Chester.

The burning oil produced at Saltney was sold as "Cambrian oil". A consignment 50 barrels of Cambrian Oil destined for Dublin was said to have contributed to the loss of life following the Abergele rail disaster. At the subsequent inquest the court was assured by Works Manager Charles Humphrey that Cambrian Oil posed less of a fire threat than strong Irish whiskey.

The Dee Oil Works were established adjacent to St. David's Oil Works, and appears to have taken over much of the oil works site after 1885. 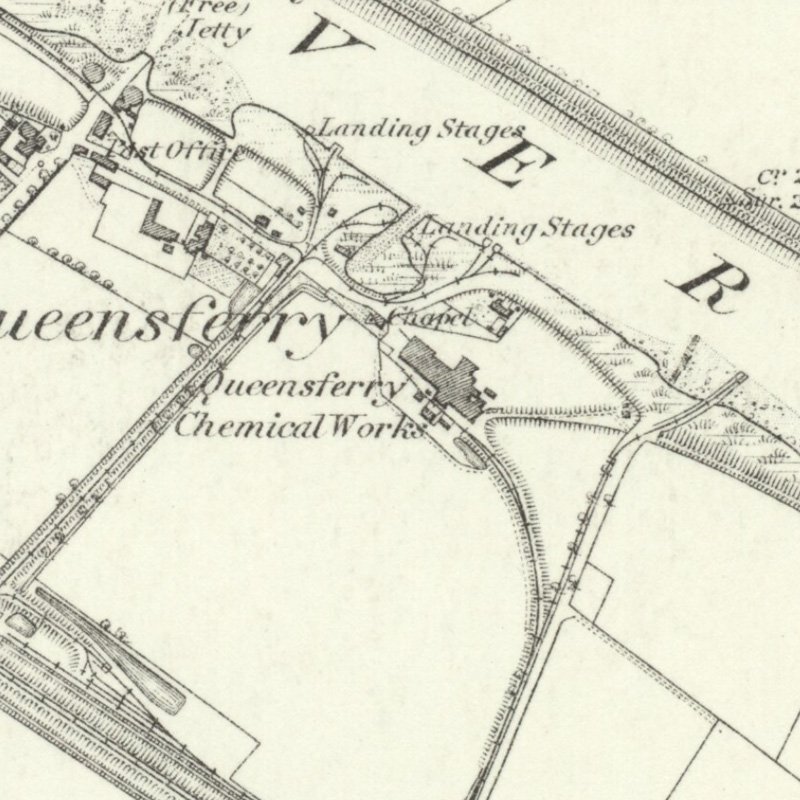 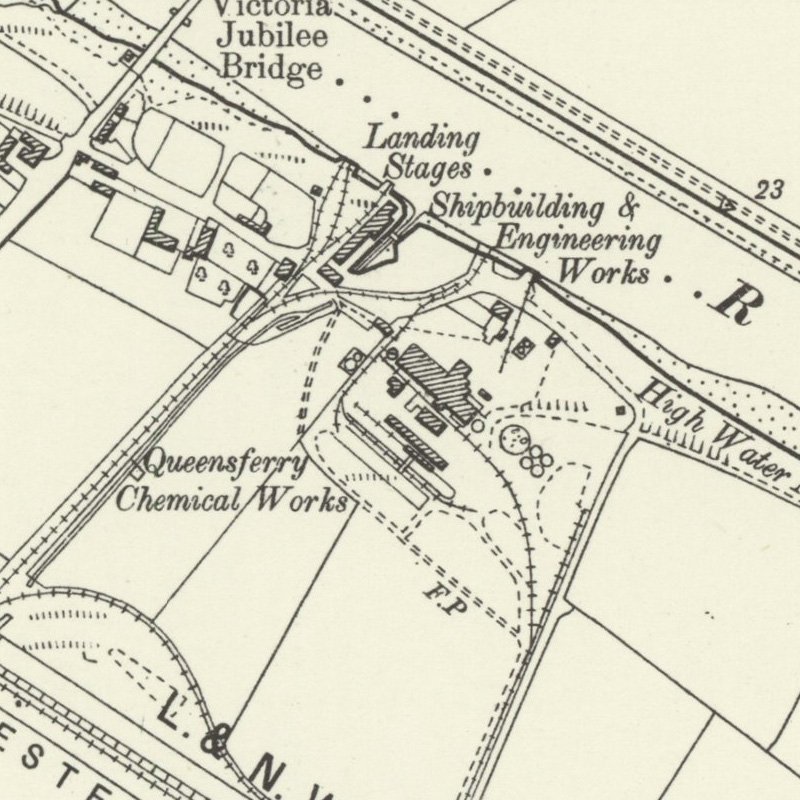 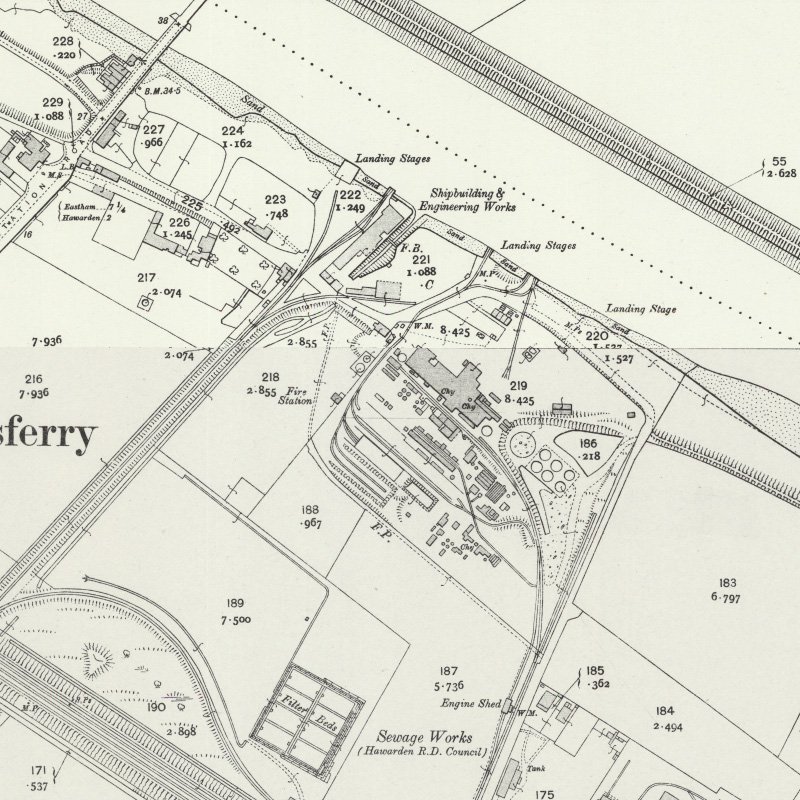 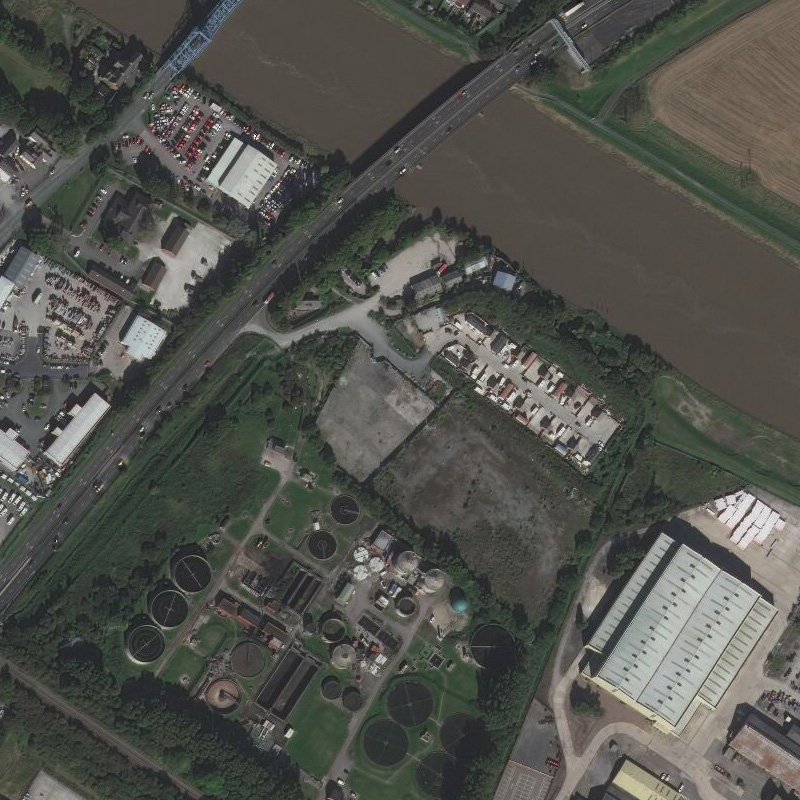 ON SALE, ENGLISH MINERAL OIL, FOR BURNING. Apply to HAINES and LOWNDS, 4, Rumford-place, Sole Agents for the Cambrian Oil Works. Take care only to purchase English Oil, which is not the least explosive.

A VERDICT OF MANSLAUGHTER

Charles Hough, labourer, employed at the St. Davids' oil works, said that about 20 minutes past eight o'clock on Friday morning, he was close to the oil works crossing. There was an engine on the line collecting empty waggons. The engine went into a siding, and a break-van and about 20 waggons were left out on the main line. He saw the deceased in the break- van. Another train came up from Chester and ran into the empty train - He saw the danger signal up. When that signal was up it indicated danger to approaching trains. The driver of the second train ought not to have passed the signal. Before the engine ran into the break-van he heard it whistle.....The train was bound for the Coppa Colliery

THE ACCIDENT ON THE LONDON AND NORTH-WESTERN RAILWAY. THE INQUEST.

Abergele, Sept. 3. The following evidence was first taken to the nature the oil: Charles Humphrey—l live at Saltney. I am manager the St David's Works the Flintshire Oil Company. Oil from cannel coal and shale is manufactured there, principally paraffin oil It is made by from coal and shale. I know that 50 barrels were sent from the works to Dublin on the day of the accident the down goods train- was the ordinary quality of burning or paraffin oil manufactured at our works. We call it Cambrian oil. The oil is not all explosive. No amount of concussion would produce either explosion or combustion. Combustion would be caused by the application of flame or caloric heat. The oil, however, would not take fire unless the temperature it were raised to 135 degrees Fahrenheit. At that degree of temperature it is highly inflammable. It approaches rather nearer to spirit than common oil does, and would burn with greater rapidity than common oil. I think if the oil came in contact with the fire of the engine under the narrated in the accident in question, it would be sufficient to account for the conflagration that followed the collision. There was no more danger in carrying this oil than in carrying other sorts of oil, and not much danger as attendant to the carrying of turpentine, naphtha,and methylated spirits. Ordinary strong Irish whiskey would more dangerous, and take fire with greater rapidity.

To Oil and Chemical Manufacturers and Others. SALTNEY, NEAR CHESTER.

Highly Important Sale of Valuable Freehold Property. . known as "St. David's Oil Works," situated at Saltney,. : near Chester. MESSRS. CHURTON. ELPHICK, & CO. have received instructions to SELL BY AUCTION, the Grosvenor Hotel. Chester, on Saturday, the 11th July, 1885, at Two for Three o'clock p.m. punctually, in one lot, as a going concern, the under-mentioned VALUABLE FREEHOLD , PROPERTY, those Valuable and Extensive PREMISES, known as "ST. DAVID'S OIL WORKS," belonging to the Flintshire Oil and Cannel Company, Limited, comprising the Residence (now in the occupation of the managing director), superior Cottage, together with the Offices, Sheds, Stables, Workshops, Storehouses, and other erections, which are extensive and very substantial.

With also the whole of the VALUABLE PLANT, MACHINERY, GOODWILL, and STOCK-IN-TRADE, together with upwards of 18a. 2r 3p. or thereabouts of VALUABLE FREEHOLD LAND, also the Estate Right and Interest of the Company in and over upwards of three acres of Foreshore, having extensive frontage to the tidal River Dee, giving easy access to the sea and the Shropshire Union Canal system, and intersected by siding of the London and North- Western and Great Western Railway Companies, thus forming one of the most admirable situations for factories, works. &c. To view the Property apply to the Manager, at the Works. Plan and particulars, with Schedules of the Plant and Machinery, may be obtained, with any further particulars, upon application to Mr. J. Tatlock, Solicitor, or the Auctioneers, Chester