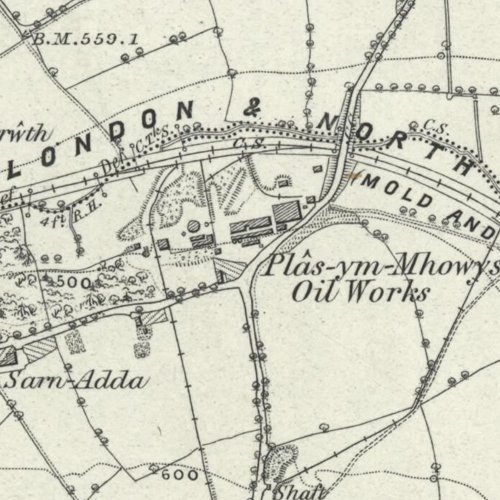 A substantial oil works and refinery sited about a mile west of Leeswood beside the Mold and Trydyyn branch of the London and North Western railway.

A tramway linked the works to cannel mines lying about 350m to the south. The Plas-ym-Mhowys Coal, Cannel and Ironstone Co. Ltd. went into liquidation in 1867 and the property put up for sale in 1868. A court case of 1871 brought charges against the "Plas-y-mhowys Oil Company" for pollution of watercourses, suggesting the works were still in operation at that time. The works appeared to remain intact on the 6" OS map surveyed in 1872, however demolition must have taken place c.1873 when bricks and masonry were advertised for sale.

Mapped by the Ordnance Survey of c.1872, apparently showing the works in operation. 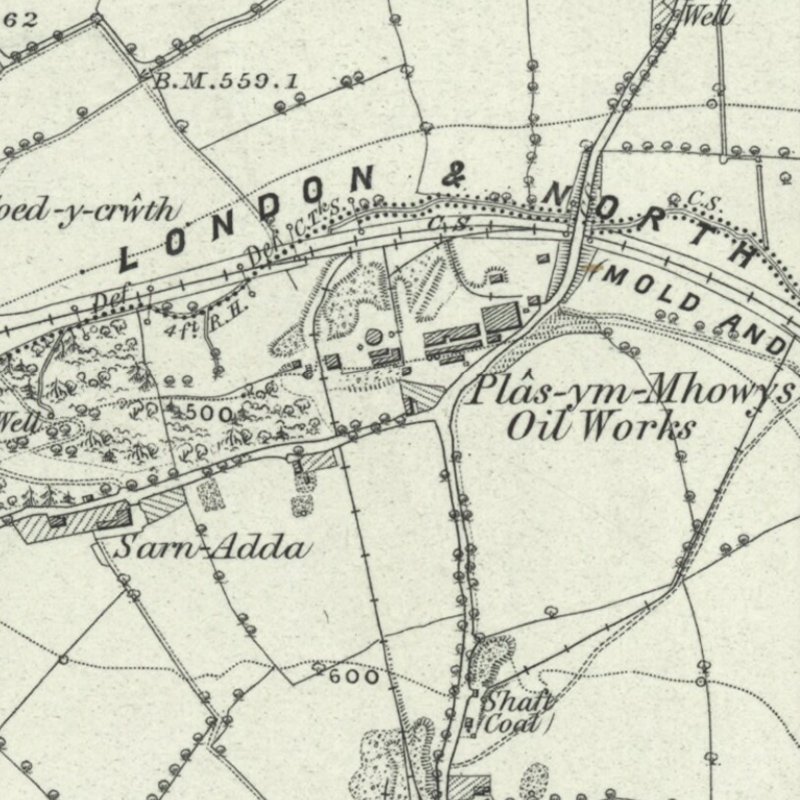 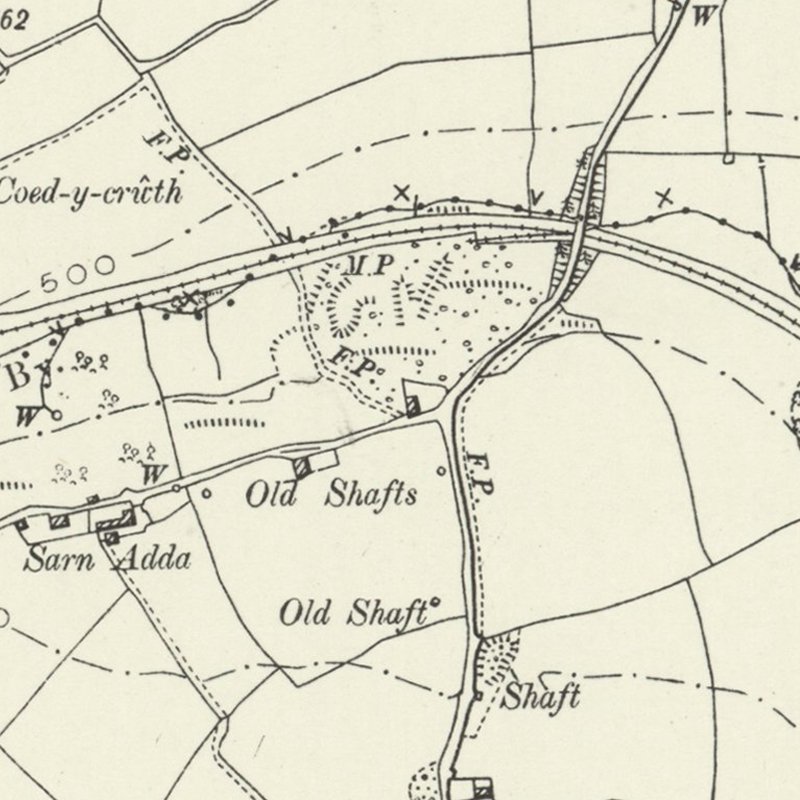 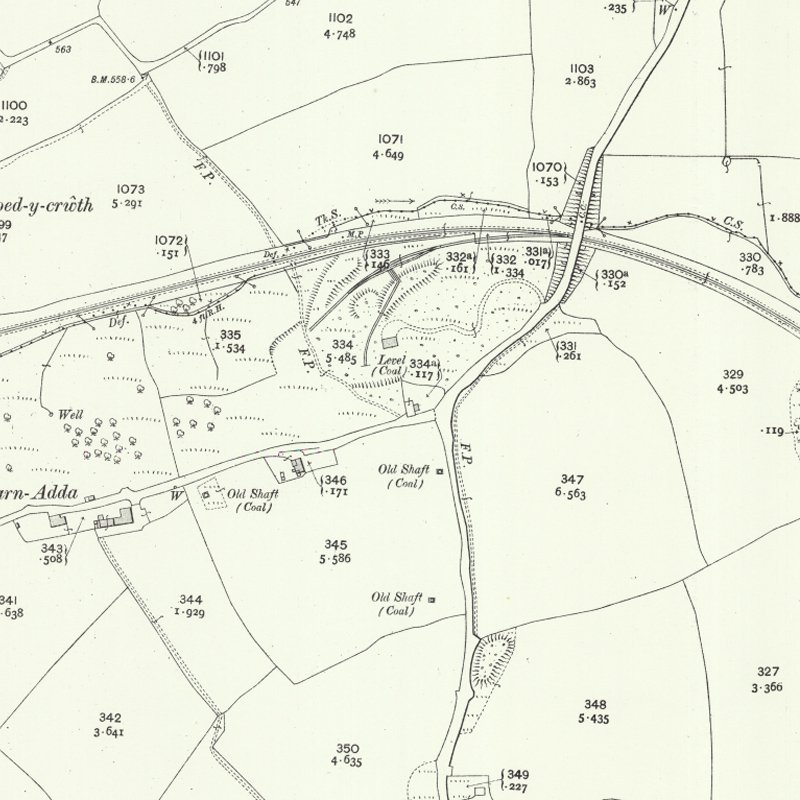 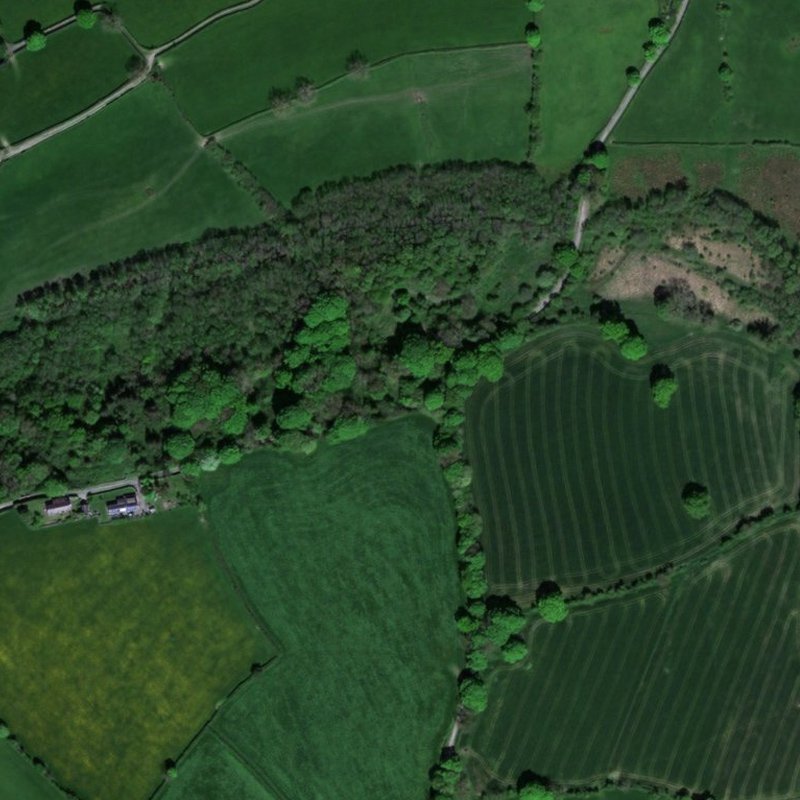 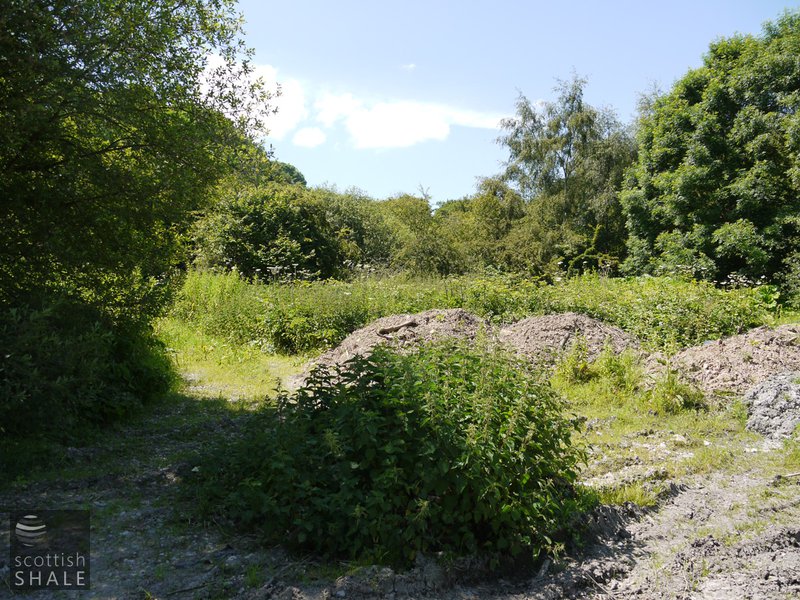 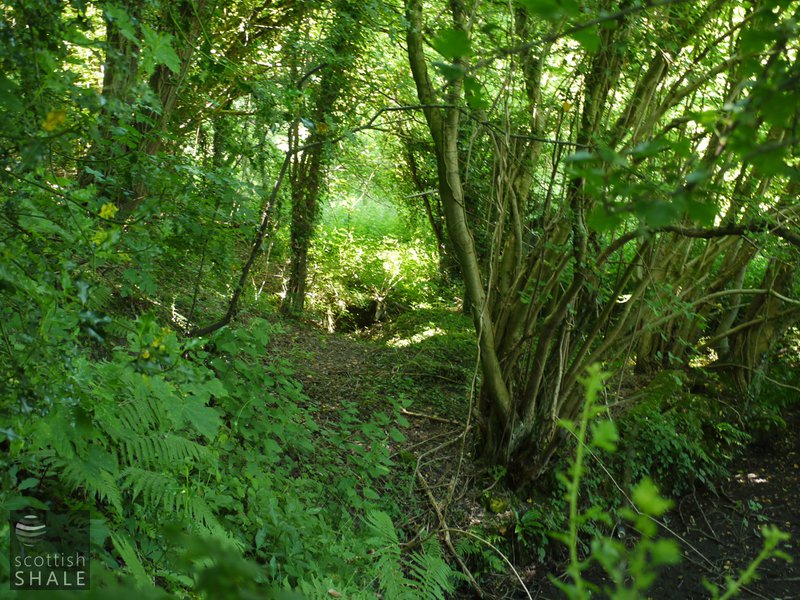 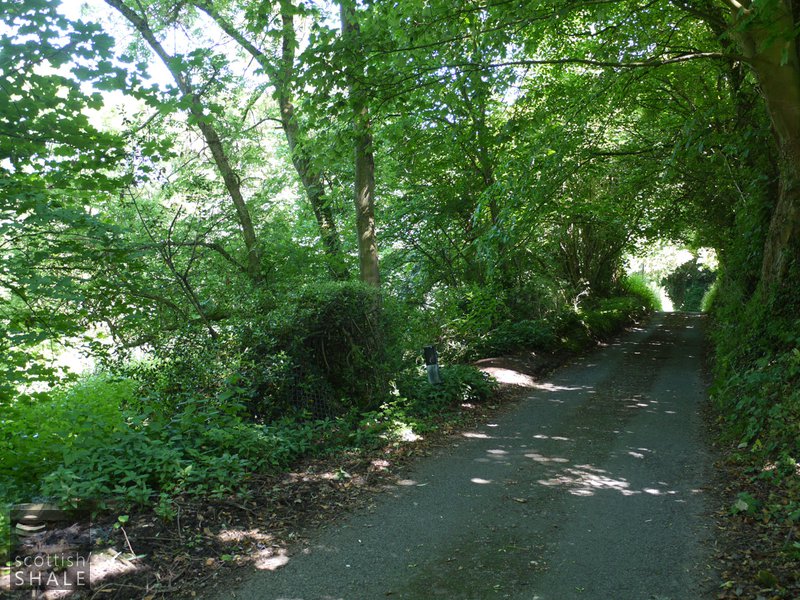 Stealing Coal.— John Hopwood was brought up on remand, charged by Mr Young, manager of the Plas-yn- mhowys Coal and Cannel Company, with stealing a lump of cannel from the works, on the 13th inst. Complainant said that the company was suffering very much from pilferings of the kind. — P.C. Parry was watching the place on the night of the 13th, and saw prisoner carrying the coal away on his shoulder. — Prisoner admitted the offence, stating that be had had his arm broken and had not been able to work for nine months. He had nothing to put on the fire, nor money to buy anything. — To be imprisoned for seven days.

TO be SOLD by AUCTION, at the Grosvenor Hotel, in the city of Chester, by Mr JOHN ORMISTON, on Saturday, the 27th of June, 1868, at Four o'clock in I the afternoon, in one or two lots, as may be determined upon, and subject to such conditions as shall then be read: - The valuable COAL MINES and OIL WORKS known as Plas yn Mhowys, situate near Mold, Flintshire, adjoining the Nerquis branch of the London and North Western Railway, and connected with it by a private siding. The COAL MINES are well known in the neighbourhood, the only seam opened by the late proprietary being a CANNEL seam, yielding the celebrated varieties of the district, viz., curly, smooth, and shale, which, from the peculiar formation of the ground, has been worked by the comparatively inexpensive process of a level, through which the coal is brought directly into the Oil Works, or to the siding of the railway for transmission to market.

The OIL WORKS are extensive, and have been but recently erected at a very heavy expense, and combine all the best and latest appliances for the manufacture of oil, spirit, &c, and the conversion of the oil yielding minerals of the neighbourhood into a marketable commodity. The property is held under lease, expiring in Sept. 1885. Any further particulars may be had on application to John Parry Jones, Esq., Solicitor, Denbigh; to Messrs Walker, Smith, and Walker, Solicitors, Chester ; or Mr Ormiston, Wigfair, St. Asaph. N.B. — Failing the sale of the property as a whole, the leasea of the colliery and the oil works will be sold separately if thought desirable. J. H. BUCKLEY, Chief Clerk. CHESTER & URQUHART, Staple Inn,

Important SALE of 500,000 BRICKS. MR. THOMAS DEAN begs to announce that he has received instructions to SELL BY AUCTION, on the premises of the Plas-yn-Mhowys Oil Works, about three miles from Mold, on Monday, the 18th day of August, 1873, at Two o'clock p.m. prompt — The whole as now in the various buildings, chimney shafts, tanks, and on the premises, estimated to contain considerably over 500,000 Bricks, consisting of slab, choice red, and a very great proportion of fire bricks, bearers, Ac. They will be offered in one lot, the vendor reserving to himself the right of one bid, and if not so sold will be divided into lots. Fair and reasonable time will be allowed for clearance. They are admirably situated for transit, as the branch line from Mold to Wrexham has a siding on the premises.