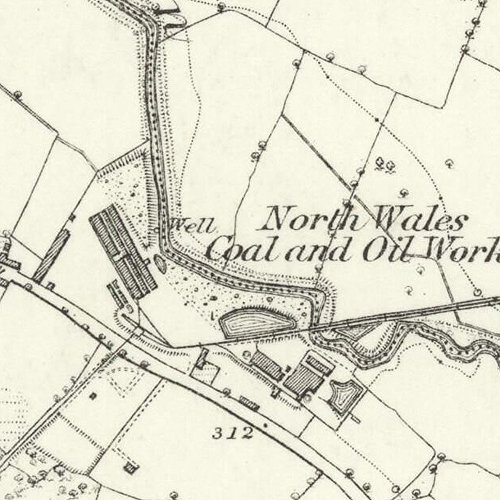 A substantial and well-equipped oil works and refinery constructed on meadow land immediately south of the River Alyn, about half a mile west of Pontblyddyn. The works were supplied by a number of coal and cannel pits - the Leeswood Hill colliery - which lay on the hillside about a mile to the south west and was linked by an inclined tramway that crossed the Mold to Wrexham turnpike road just outside the works.

A neat array of 115 retorts by George Bennie of Glasgow (plus 24 American-style rotary as decribed in Ure's dictionary) lay on the west side of the private railway linking the works to the Ffrith branch. The extensive refinery, equipped for production of a full range of oil products, lay on the east side of the branch railway.

Despite the care and substantial capital invested in the works, the company failed in 1869, and the works and contents were sold off in 1870. It appears that the firm of W.B. Marston acquired the refinery part of the works and continued production until 1875. The second edition (1898) OS map shows the disused Leeswood spelter (lead) works on the site of the refinery, but no remaining trace of the crude oil works.

An existing house on the site appears to share part of the footprint of the (presumed) oil works office building, while a surviving outbuilding may have been developed from the enginehouse, or similar stucture, at the foot of the incline to Leeswood Hill Colliery.

Mapped by the Ordnance Survey of c.1869, showing works in operation. 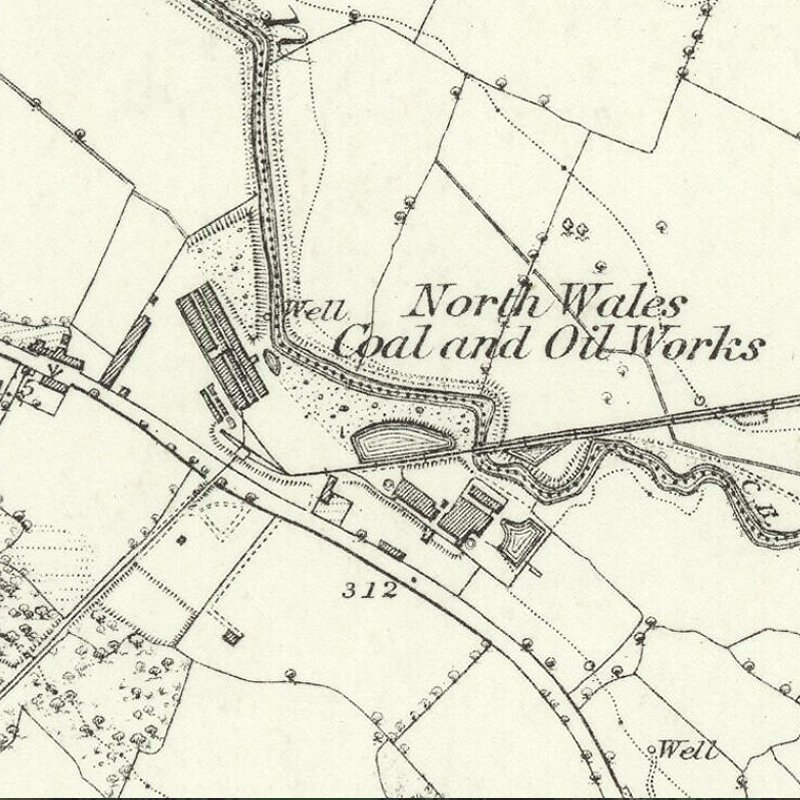 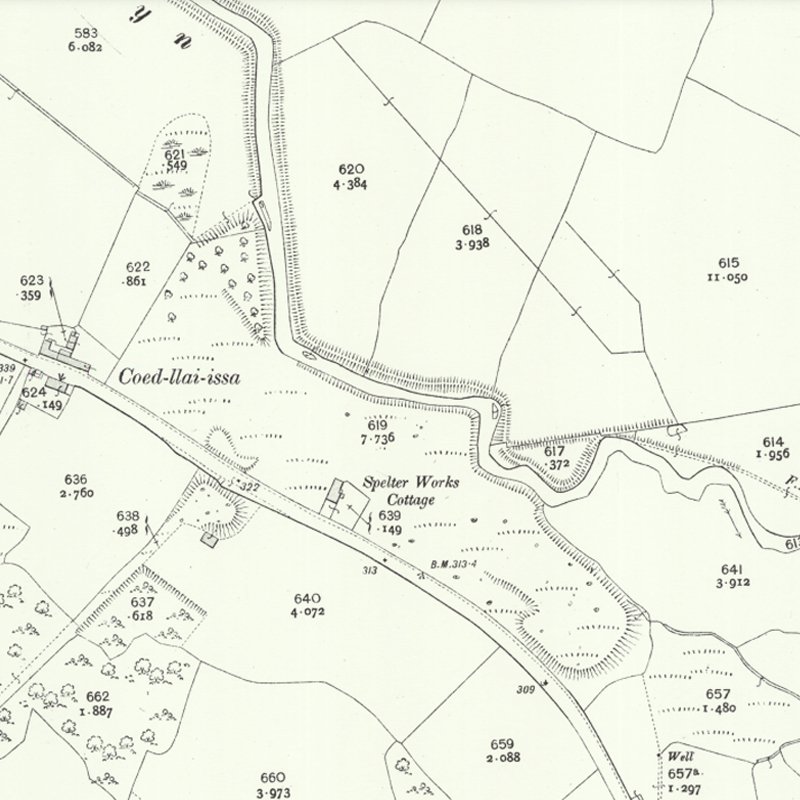 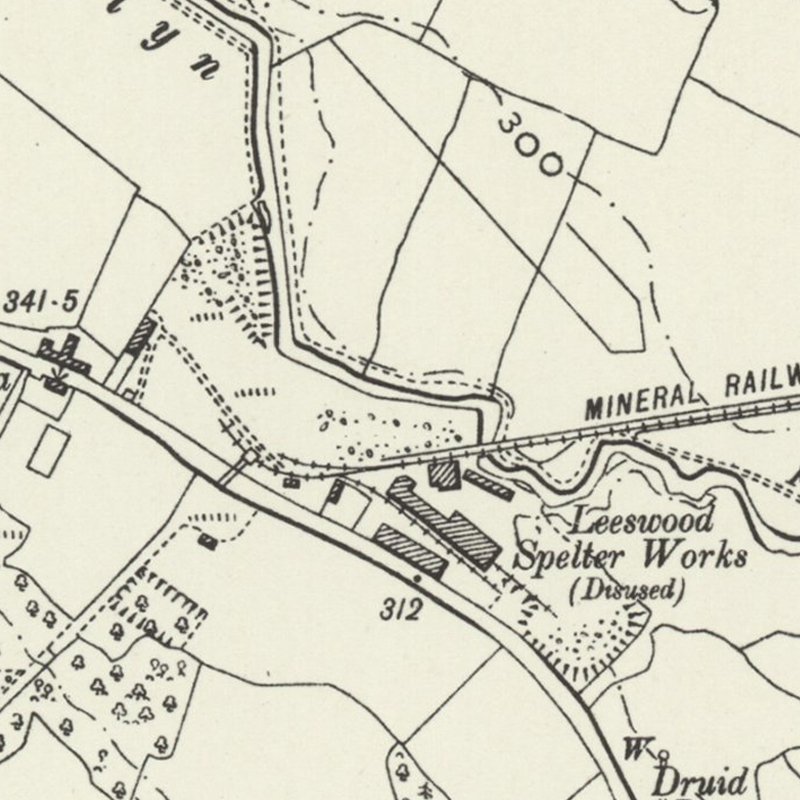 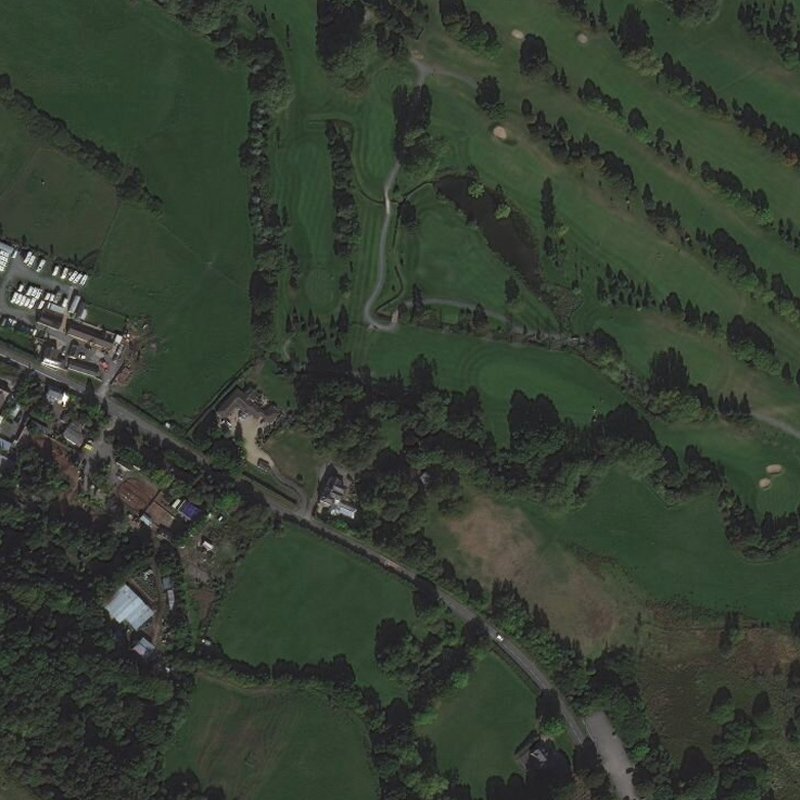 Close by the large works of the Coppa Company, I came upon a compact works of twenty-five retorts, belonging to a gentleman, the son of one whose name and fame, in regard to the advancement of educational progress, is only second — if second — to that of Lord Brougham. Inheriting the genius of his father, it was strange to see one so accomplished, and capable of so much, shut up in these mountains, and the companion of uncouth money- makers....This crude oil making was an experiment in science when he first took to it, and courageously worked out the problem

; it is now a profitable manufacture, and pays well for vigilant personal superintendence....Each of his retorts, he said, were charged with from 12 to 13 cwt. — in the proportion, generally, of one-third curly cannel, one-third smooth, and one-third shale. From these proportions he produced 47 gallons of crude oil — worth about 8d a gallon he not " running it over," but selling it to refiners " naked" as is called when merely produced from the coal. .....I parted from the hospitable sheds in which we had sat down for half an hour's chat, with considerable reluctauce, and slowly wended my way across the broken tracks and along the railway that spreads out here, up to the colliery in the distant hills like an arterial system.

In Wales, the services of Messrs. Bennie and Co. have likewise been in request during the last few years, notwithstanding its great distance from Glasgow. Besides retorts of both kinds and superheaters, nine 1,500-gallon stills have been supplied to the North Wales Coal Oil Company (Limited).

Stealing Coal from Railway Wagons- Lillie Beeton was charged with this offence by Mr Roberts manager of the North Wales Coal and Mineral Oil Company, who had lost large quantities of coal at various times from their wagons on the Mold and Denbigh line. Pleaded guilty, and sentenced to seven days imprisonment..

Important Sale of a large Stock of Oils, etc. at the Works of the North Wales Coal Oil Company. LEESWOOD HILL, near Mold, Flintshire, about half a mile from the Padeswood Station, on the Chester and Mold Railway. MESSRS. CHURTON and ELPHICK beg to announce that they have received instructions to SELL BY AUCTION, on Monday, April the 25th, 1870, commencing most punctually at Twelve o'clock noon, the under- mentioned valuable Stock of MINERAL OILS and other effects, comprising:

N.B.— The Ffrith branch of the Chester and Mold Railway runs into the works, where every convenience for loading will be found. Catalogues may be had at the offices of Mr Jas. Wakefield, Accountant, Corn Exchange Chamber.--, Chester ; or from the Auctioneers, Whitchurch (Salop), and Chester .

SALE BY MESSRS CHURTON & ELPHICK. FLINTSHIRE. OIL WORKS, REFINERY, COLLIERIES, and FREEHOLD LAND. Important Sale of the Leasehold Interest of the Vendors in Two Collieries, and in.the extensive Oil Works and Refinery, known as " The North Wales Oil Works " also a piece of extremely valuable Freehold Land, and the minerals (including the proved seam of Cannel) there-under, together with the whole of the valuable and costly Colliery and Oil Works Plant and Machinery, and Private Railway direct from the works into the Coed Talon branch of the Chester and Mold railway.

MESSRS CHURTON AND ELPHICK respectfully announce that they have been instructed to SELL BY AUCTION, at the Grosvenor Hotel, in the city of Chester, on Tuesday, the 23rd day of August, 1870, at Twelve for One o'clock p.m., most punctually, in the following or such other Lots, as may be decided upon by the agents of the vendors at the time of Sale, and subject to such conditions as will be then produced, the highly important Works, known as THE NORTH WALES OIL WORKS, situate on the north side of the Mold and Wrexham Turnpike-road, at Pontblyddyn, about three miles from Mold, in the county of Flint, and half a mile from the Padeswood Station, on the Chester and Mold Railway, together with the COLLIERIES in connection therewith, a FREEHOLD MEADOW adjoining;, and the whole of the MACHINERY, PLANT, UTENSILS, and FIXTURES upon the premises, recently erected at a very large outlay, and embracing the newest improvements and appliances.

It is proposed to offer Lots 1, 2, 3, and 4, in the first instance, in one Lot, and, if not so sold, then in the following, or such other Lots, and in such order, as the agents of the vendors shall determine, viz.

Mr Liston, who resides at the Works, will appoint a person to show the Lots.

SALE BY MR. THOMAS DEAN. Sale of a Freehold Meadow, with the Cannel seam and other Minerals thereunder, at Pontblyddyn, near Mold, Flintshire, and about half a mile from Padeswood Station, on the Chester and Mold Railway. TO be SOLD by AUCTION, by Mr THOMAS DEAN, at the Black Lion Hotel, Mold, on Wednesday, the 12th July, 1871, at Four o'clock in the afternoon prompt (unless previously disposed of by- private treaty, of which due notice will be given), and subject to conditions to be then produced, a very valuable piece of Freehold MEADOW LAND at Pontblvddyn, bounded on the north by the river Alyn, having a frontage to the Mold and Wrexham Turnpike Road, adjoining the Oil Works, late belonging to the North Wales Coal Oil Company Limited, and now to W. B. Marston, Esq., and near to the Druid Inn, and Pontblyddyn Church, containing 4a. 2r. 5p. or thereabouts and now in the occupation of Mr Alexander Liston, together with the MINES and MINERALS thereunder, comprising the valuable Cannel seam of the district, which has been proved in this land, and about a quarter of acre thereof, gotten by the Coppa Colliery Company, to whom the seam east of the fault has been let at a royalty of £95 per foot per acre. Immediate possession can be given. To treat in the interim, or for further particulars, apply to Mr James Wakefield, Accountant; Messrs. Walker and Smith, Solicitors, Chester; or to the Auctioneer, Mold.

NORTH WALES OIL WORKS, NEAR MOLD. W. B. Marston, Esq.,having resolved to abandon the production of Paraffin Oil at his North Wales Refinery, Padeswood, and in future to carry on only the Grease and Lubricating Oil Trade, at his Leeswood Vale Oil Works, Coed Talon, near Mold, has instructed Mr THOMAS DEAN to SELL by AUCTION his. PARAFFIN OIL PLANT, at the above North Wales Oil Refinery, at Padeswood, about two-and-a- half miles from Mold, on the Mold and Wrexham turnpike road, on Monday, the 4th day of October, 1875, at one o'clock, p.m., prompt, the whole of the extensive Plant and Fittings - Comprising:

Mr Dean has great pleasure in calling the attention of oil refiners and manufacturers, as also proprietors of chemical works and gentlemen requiring storage tanks for water, to this very extensive plant, the whole of which is in good working order and of high character. Full descriptive catalogues are now ready and can be obtained from the Auctioneer, Mold, or at the Works. On view 14 days prior to the sale, when the manager will show the various lots. A railway siding goes through the premises.