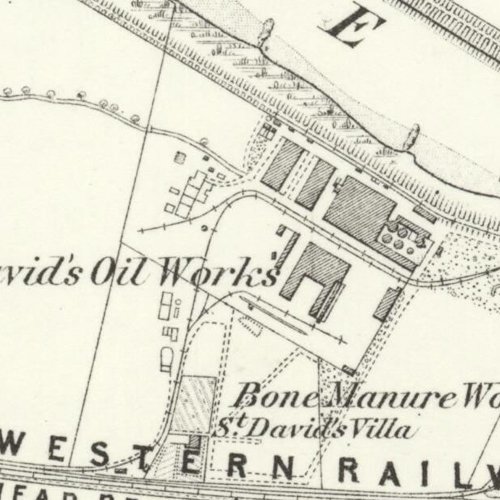 Dee Oil Works were constructed c. 1874 on a site adjacent to St David's Oil Works at Saltney, lying between the London and North Western Railway and the River Dee. The refinery was subsequently extended into the site of those works. In 1882, a candleworks were constructed on a site a quarter of a mile to the east, linked by branch railway. A contemporary account (below) describes the buildings as forming.

"two distinct groups, resembling one another in the appearance of the round-backed, red-painted iron buildings".

When first constructed, the Dee Oil Works may have refined some crude oil from North Wales, however production was soon based on imported American petroleum. In 1888, when the Dee Oil Co. Ltd was promoted, the works were described as one of the largest lubricating oil works in Britain. Images show several benches of stills at the oil works site, while wax refining, candle producture and the manufacture of soaps and ointments were based on the candle works sites.

Mapped by the Ordnance Survey of c.1869, showing St David's Works, prior to construction of the Dee Oil Works.

Number of retorts: none - refinery only. 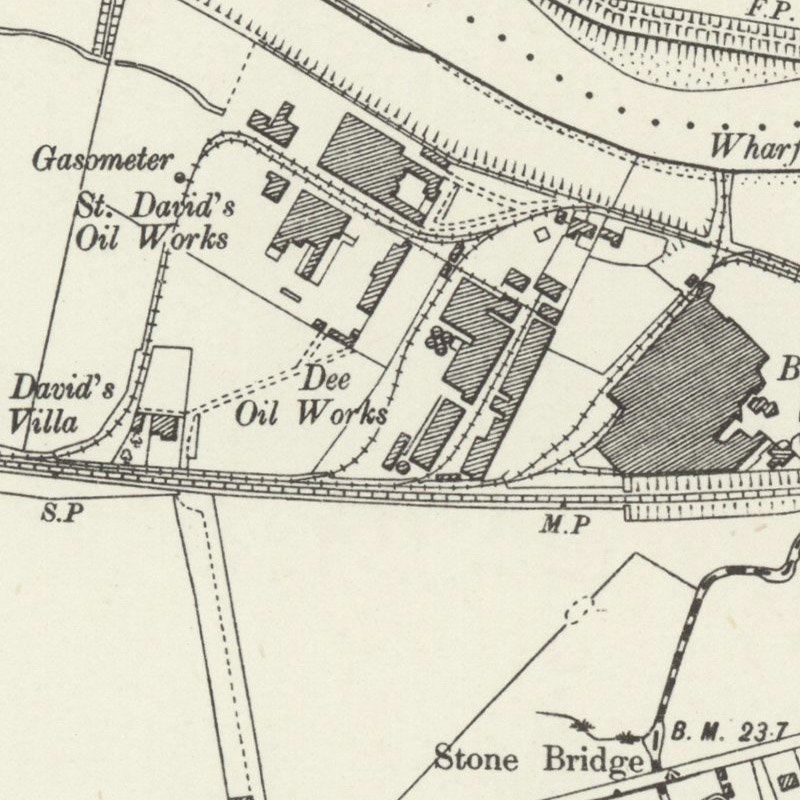 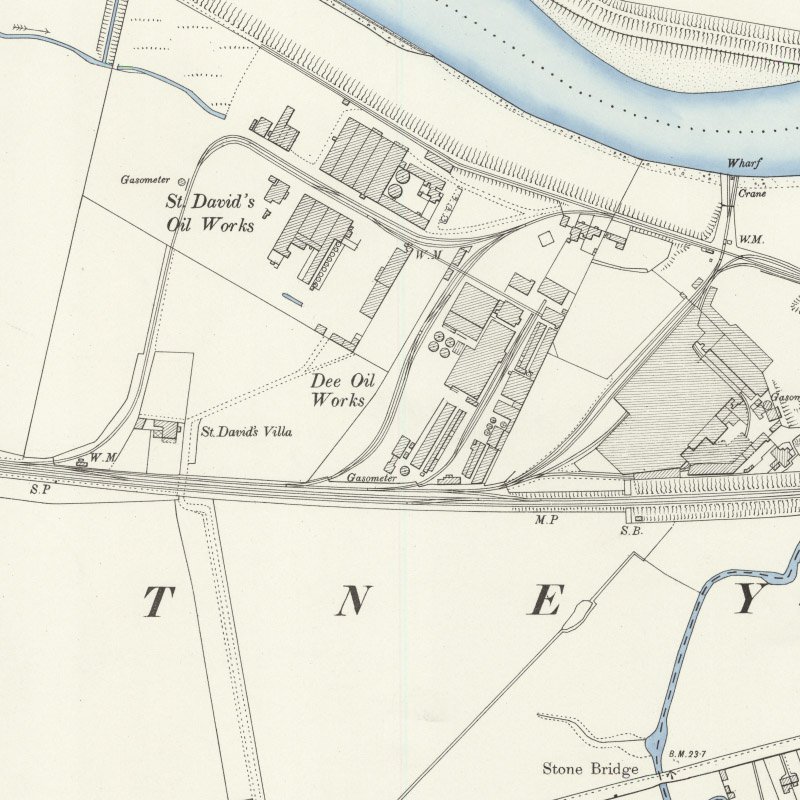 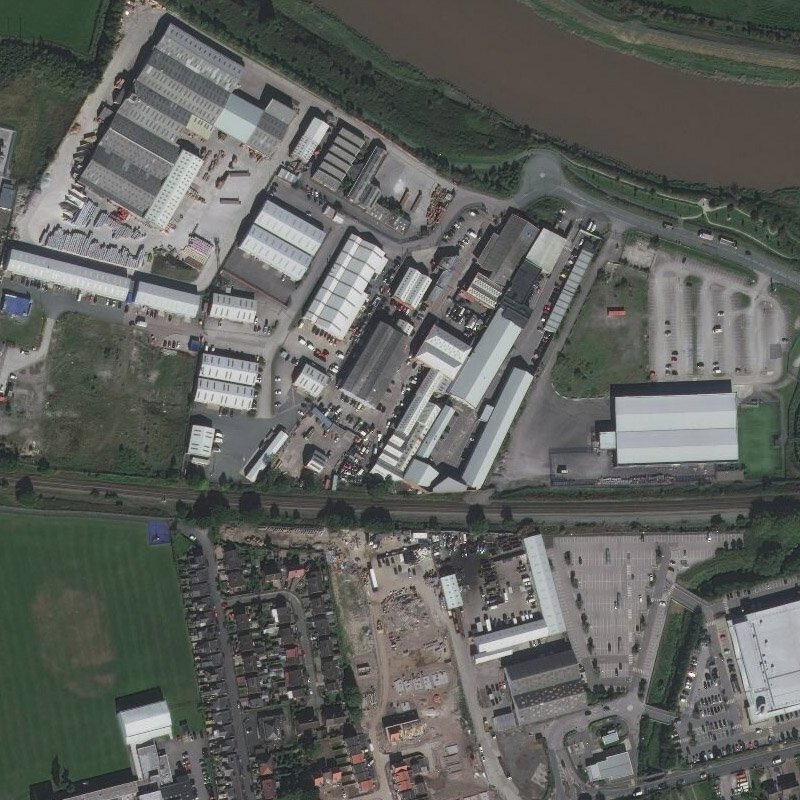 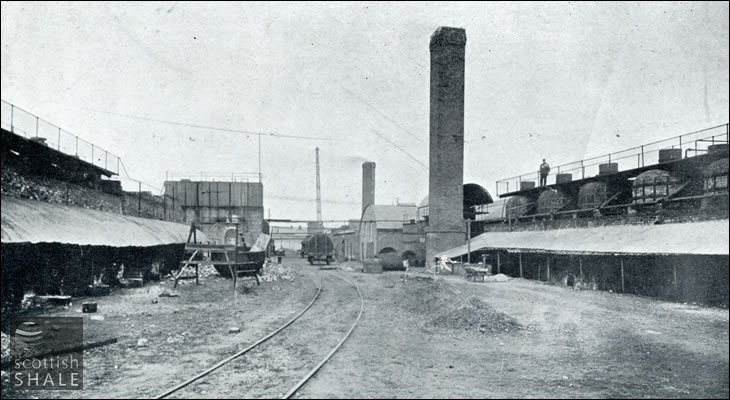 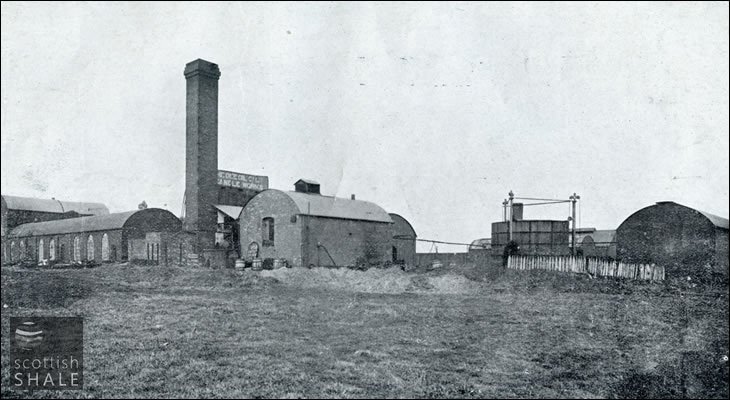 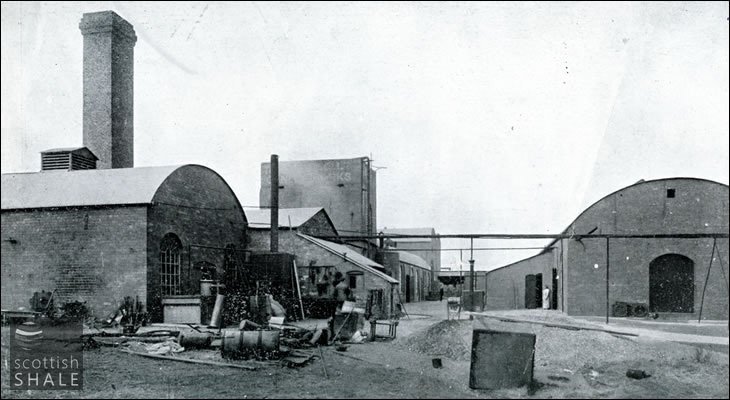 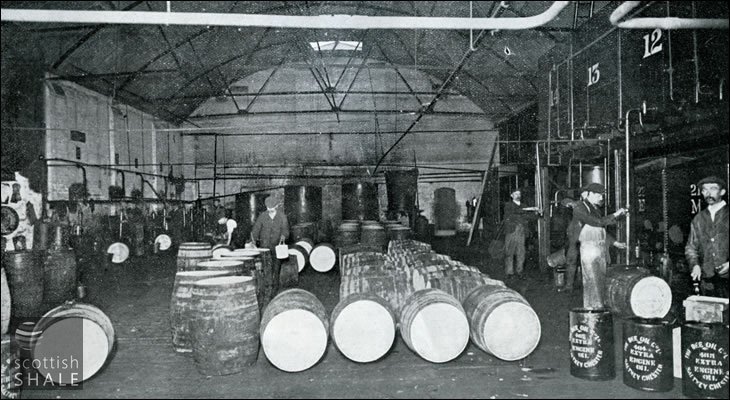 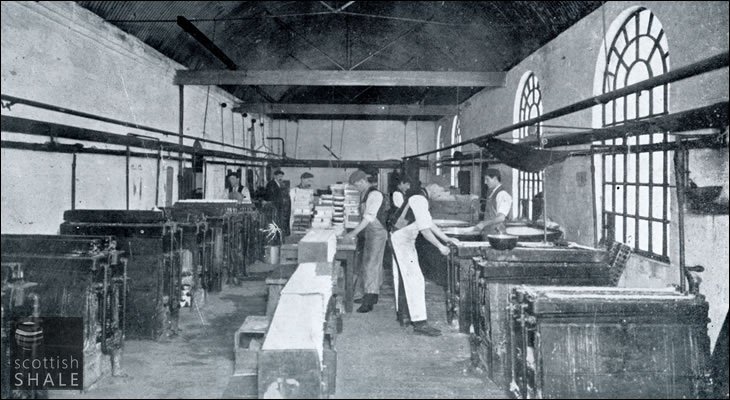 FATAL ACCIDENT AT A SALTNEY OIL WORK - THE DANGER OF NAKED LIGHTS. On Saturday afternoon, Mr R. Bromley, coroner, held an inquest at the Police Station of the Flint-shire Constabulary, on the body of John Armstrong, 62 years of age, who had resided in Bridge-street, Saltney. and who had been employed as a stillman at the Dee Oil Works, Saltney. About half-past four o'clock on Friday morning one of the stills, containing a large quantity of oil, became ignited. Tbe employees from neighbouring works were speedily summoned, and succeeded in extinguishing the flames, thus averting a great conflagration.

A visit to the oil works & candle works of the Dee Oil Co. Ltd.

Below Chester, the Dee has been canalized down to its mouth. Land has been reclaimed and the banks built up, and the river follows a geometrically straight course. A little below Saltney and about two miles from Chester, on the left hand bank of the river and lying between it and the main line of the L.&N.W. Railway are the works of the well-known DEE OIL COMPANY LTD. They form two distinct groups, resembling one another in the appearance of the round-backed, red-painted iron buildings, but separated by a distance of a quarter of a mile. The older and major portion of the works are those further down the river, which were built in 1874 when the company was formed, while the other works were added in 1882, and are used for the manufacture of refined paraffin wax and candles. The two works occupy 28 acres of ground; a siding, running along the river bank, connects with the Great Western Railway at Saltney, while they are also connected on the other side with the London and North Western line.

The main portion contains the general oil distilling works. Many different products are obtained from the raw American petroleum, and the work comprises many secret chemical processes. We are allowed a general view of the premises, however – the rows of large steel stills built up with brick-work, the treating pots, and the cube tanks, in which the distilled products are washed with soda; also the storage buildings, fitted with large an numerous tanks in which the various oils are stocked. The manufacture of soap was only undertaken about two years ago, but has met with great success, and forms now a very considerable department of the works.

All varieties of soap are made. The special Super-fatted Special Cream Soap is quite a departure in soap-making. It is absolutely non-injurious and prepared from special ingredients, the result of recent chemical research. Other toilet soaps, medicated soaps, household disinfectant soaps, figure in their lists, and the success they have met is no doubt due to the thoroughly modern equipment of the large airy and sweet-smelling factory in which they are made.

In this factory one sees the three large pans in which the soap composition is boiled. It is then poured into the frames, as the large rectangular receptacles are called, from which the congealed soap emerges in solid blocks. These blocks are cut up into bars by machines fitted with wire cutters, the different grades being then chipped or reduced to shavings, which are dried in ovens. When all the moisture has been extracted the shavings are milled through granite rollers. The powdered soap is then plodded or forced through a machine very much like a brick-making machine, and emerges from the plodder as a continuous oval-shaped bar, which is finally cut into lengths, stamped, and sent to the packing department and stores to await dispatch.

The principal and original manufactures of the company from the raw petroleum include lubricating oils, burning oils and pale mineral oils. The various qualities and weights of these oils render them incomparable for many uses. They comprise cylinder oils, engine and machinery oils, electric machinery and gas engine oils. The "Diamond" motor lubricants form in themselves a long series of oils specially prepared for motors, and in these the company specifies the particular grade best adapted to various motors for different seasons of the year. The "Electric" cutting cream is a special lubricant for high-speed steel engineer's cutting tools, having very special lubricating and cooling qualities. The Dee Oil Co. also manufacture one or two patent products that have gained high praise and adoption by the medical profession. Of these is the Oleum Deelinae, which provides a successful treatment for eczema and other irritations. It can also be used for internal irritations. Salvo Petrolia, or Petroleum Jelly, or again, as it is also called in the British Pharmacopoeia, "Paraffinum molle", has been adopted by the board of Trade, and is held to be the finest emollient and remedial preparation of petroleum yet produced. It is manufactured in five distinct qualities, with a special quality in the Edible Salvo Petrolia. This is sold in tubes and is an emollient of the highest value in the treatment of throat disorders, and is a most valuable remedy for hoarseness for public singers, actors, and singers.

In the candle works, a quarter of a mile away, the paraffin wax from the first works is refined and a portion of it used in the manufacture of candles. The process of refinement is a triple one, and the wax obtained is a beautifully clear and translucent quality. The candles, of various grades, include white and coloured candles, house candles, night lights, carriage lights, and disinfectant candles. These candles are mostly for the home trade, but large quantities of refined paraffin wax is shipped abroad. The process if candle manufacture commences at the "crude end", as it is called, of the works. The paraffin wax is melted down in the several boilers and is pumped into large tanks, from which it is drawn off into shallow pans, where it is allowed to harden into flat cakes. In special pressing frames these cakes are subjected to a high pressure which extracts all the oil. In the "semi-refined" portion of the works the same process is exactly repeated. The cakes obtained from this second operation are already refined to a point of great purity, but are then, in a third refining process, melted down in filtering pans and allowed to filter through the charcoal, when the refining is judged complete, and the product is transparent, tasteless, and pure. The candle-making proper then follows. The wicks, of specially prepared cotton, are dipped in a certain acid preparation, which does away with the old-fashioned necessity of snuffing. The melted wax is poured into moulds and allowed to harden, the finished candles being then withdrawn.

The Saltney works for the headquarters of this important and well-known firm, but branch offices exist in London, Liverpool, Paris, Hamburg, Antwerp, Glasgow, Nottingham (Midland), and Barrow-in-Furness, for handling some part of the enormous business of the Dee Oil Co. Ltd.

UNDER DISTRESS FOR RENT

SALE of Two 4-inch COPPER COILS, 3ft 6in, diameter, 3ft 6 in. deep containing 4 rings each with 2 copper connecting pipes by G. Adlam and Sons, Bristol; 2 Wrought Iron closed RIVETTED TANKS, with open tops and external angles size 5ft by 5ft and 4 ft 6 in deep. 2 WOOD VATS, made of 2-inch timber 5ft deep, 4ft 6in. Diameter by R. Airey and Son, Huddersfield, and a quantity of acid resisting Linings now lying upon the premises formerly forming a portion of the works formerly known as DEE OIL WORKS, SALTNEY, near Chester